Here we are: the Reserved List cards all rallied as buyouts ensued, TCGplayer and vendors across the internet sold out of Magic’s earliest cards, and buylist increases had to follow for these stores to restock. Now those buylist increases are starting to bear fruit, and cards are entered into vendor inventory at record high retail prices.

I’ve seen this show before.

When this happened in 2017-2018, the sky-high prices didn’t hold. Vendors had a tough time moving unplayable or fringe playable Reserved List and Old School cards. Even some of the bigger cards, such as Library of Alexandria, had a price tag that could not be justified. Inventory sat, vendors couldn’t move everything at the “new price”, and eventually there was a retracement.

Will the buyout craze of late 2020 / early 2021 follow the same pattern? Doesn’t history repeat itself? It’s not nearly so simple this time around. This week, Sig will explore the similarities and differences this time versus the last, and shares his thoughts on how best to position no matter the outcome.

I’ve been following Card Kingdom’s buylist even more than normal throughout this buyout season. However their algorithms work, they tend to have dynamic, reactionary changes to their buy prices as the market fluctuates. Some of the cards on their buylist have followed a very similar pattern as during the 2017-2018 buyout event.

For example, consider Revised Dual Lands. If you follow me on Twitter, you’ll know that I’ve been watching buy prices on these particularly closely. They were climbing day in and day out, and some where hypothesizing their buy prices would peak when they were parity to offers seen from Japanese vendors.

In reality, this has not played out (yet, at least). At one point, top buy price on a Revised Underground Sea peaked at $780. Now, the top buy price is down to $577.50 according to Trader Tools. Card Kingdom’s buy price isn’t even best in class anymore. Their offer: $550. Star City Games has been aggressively playing in the Dual Land market as well—remember when SCG buyer Ben Bleiweiss tweeted out their buy prices on Duals back on February 1st? 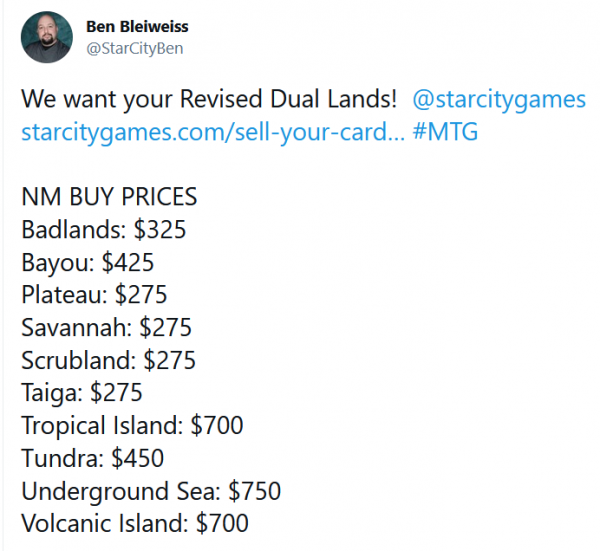 Why have buy prices, particularly at Card Kingdom, dropped so much? Look no further than their inventory (and their sell prices)… 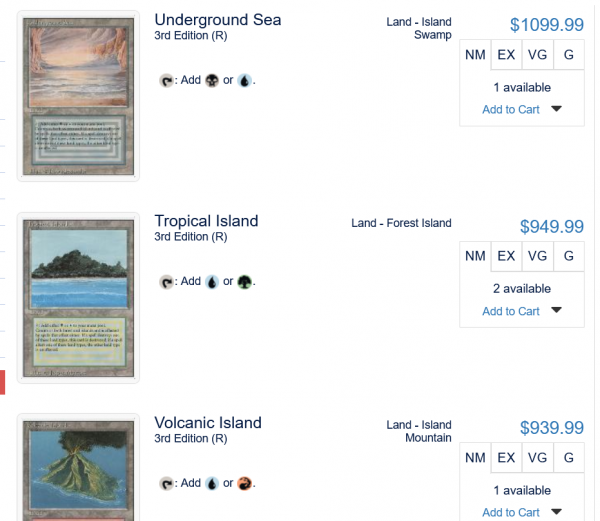 Do not be deceived by their near mint inventory. While they may not get many near mint Duals in stock, they have a bunch of played ones. For example, Card Kingdom has eight EX, VG, and G copies of Underground Sea listed. Though oftentimes I see them cap their quantity restocked at eight per condition—if I had to bet, I’d guess they had more waiting in the wing.

At these prices, are you really surprised to see that they have so many in stock? They’re not exactly going to fly off the shelf at these prices. Card Kingdom managed to up their prices so much to ensure they maintain some inventory. But even with trade credit, I cannot advocate buying an HP Underground Sea for $769.99 when there are MP copies on TCGplayer for 5% less.

Beyond Dual Lands, I’ve also observed vendors slowly restocking other high-end cards as well. Card Kingdom has finally started restocking Collectors’ Edition Power at new, higher prices. They have over a dozen copies of Bazaar of Baghdad restocked ($3009.99 for HP!), a few Library of Alexandrias ($2449.99 for HP) and even two The Tabernacle at Pendrell Vales ($4549.99 for HP).

Star City Games and ABUGames have also been adjusting buy and sell prices in kind, though a little more slowly. At one point Star City Games literally had zero Arabian Nights cards in stock. Now they have two: a heavily played Drop of Honey for $599.99 and a near mint Erhnam Djinn for $699.99.

It’s not much, but it’s only the beginning. We saw the same restocking and price adjustment patterns in 2018, and ultimately it led to a retracement and two-year stabilization of market prices.

The Ways This Looks Different From Last Time

These are fairly compelling observations that lead me to believe prices may be peaking, and we could be in for another 1-2 year period of consolidation as prices correct. After all, are players really eager to hand over a thousand bucks for a nice Underground Sea? Can nice Library of Alexandrias really sell quickly at $4000? Can heavily played Black Lotuses really sell north of $10,000?

Well, at least in some cases, the answer is “yes”. Just check out eBay’s completed listings on Black Lotus, for example: 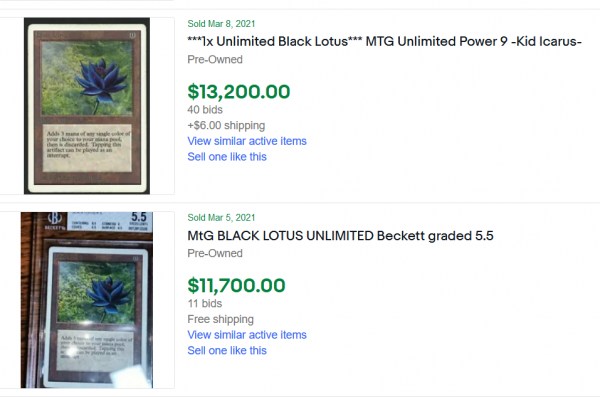 Some cards are still moving even at their new price points. Browsing Card Kingdom’s Unlimited inventory, I see that they have adequately restocked many cards in the $100-$500 range, usually with much higher prices than a couple months ago. But as of the morning of Sunday, March 14th, they have exactly one piece of Unlimited Power in stock: an EX Black Lotus listed at $20799.99.

I remember seeing Card Kingdom restock a few other pieces of Power at new prices just last week, but every other one sold. They also have thin stock on blue Unlimited Dual Lands, and prices may have to adjust even higher to generate inventory for the vendor.

Despite aggressively higher buy prices, Card Kingdom still struggles to keep many high-end cards in stock, especially the more desirable / playable cards from Legends and Arabian Nights. While I have observed some buy prices cooling off in recent weeks, this hasn’t been universal across the board, and there are plenty of cards Card Kingdom still offers all-time high numbers to buy. This includes cards like Moat, Eureka, and Guardian Beast.

This tells me that, while some prices may be stabilizing, other cards may be breaking rank and will continue to climb.

The Wild Card: Stimulus and the Collectibles Boom

On the one hand, I’m tempted to look past the smattering of cards that continue to sell at higher prices, call them anomalies, and claim that all prices will be cooling off in the coming months. But there are too many external factors at play that could prevent this outcome.

First and foremost, congress just passed another stimulus package bill. Now many Americans will be receiving yet another stimulus check in the amount of $1400, on top of additional unemployment benefits and child tax credits. This is going to pump yet even more cash into the economy; some Magic players who don’t need that cash infusion to buy food and shelter could very well spend it on cardboard, even at higher prices. Don’t forget we’re also in the middle of tax refund season!

Then there’s cryptocurrency hype, and the fact that Bitcoin is accelerating higher as it crashes through previous all-time highs. Last weekend, Bitcoin broke through $60,000…I have to imagine at least some crypto profits will filter into the already-hot collectibles market. Pokemon cards are also soaring, and this could draw more attention towards the lesser-known Magic market. 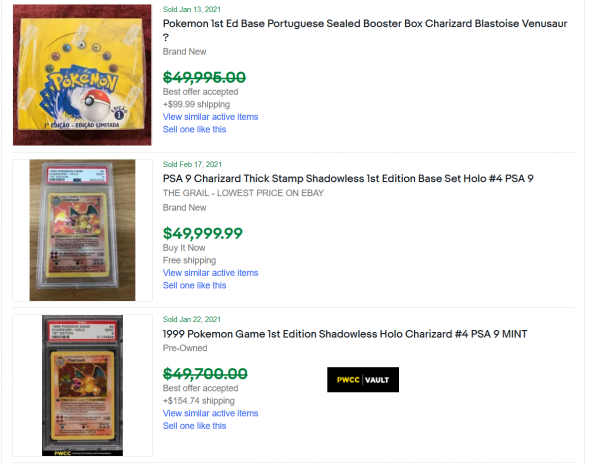 And of course, I can’t discuss the importance of collectibles and nostalgia without mentioning COVID-19. People are stuck at home (for over a year now), largely unable to travel and spend their money on experiential things. But with excess cash from the government, what better thing to do than to enjoy some of the nostalgic collectibles we remember as a child? It’s the same reason why some classic video games are also climbing in price lately.

The pandemic continues to shut down large organized events, such as MagicFests, and that continues to hamper exchange of cards. Some vendors are literally resorting to driving / flying around the country to purchase collections in person in order to restock their inventory. Michael Caffrey of Tails of Adventure has been vocal about this on Twitter. 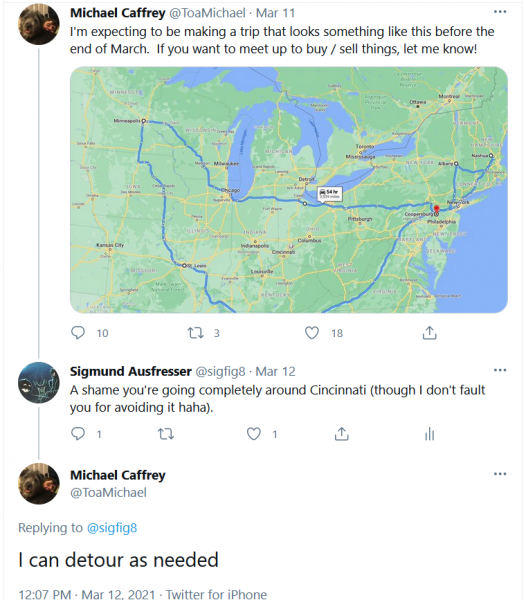 As long as large events remain shut down, vendors will continue to struggle to restock some cards. As long as that remains the case, prices could be sticky at their new levels.

If there was no COVID-19, I would readily say that Magic prices are peaking and it’s time to sell if you intend to cash out because we are due for a one- or two-year consolidation period. That outcome is still on the table, but there are some external factors really getting in the way.

COVID-19 shut down large events, making it difficult for vendors to restock. A quick glance at inventory on a card from Arabian Nights, such as Elephant Graveyard, is all you need to understand just how few copies are flowing in this market.

While supply remains constrained, demand stays strong, in part thanks to the government’s willingness to give many Americans handouts in the form of $1400 checks. This will certainly pump more cash into the Magic market, keeping prices inflated. After all, what else is there to do during a pandemic?

These external factors give me pause, and cause me to question which direction the market is going to turn this Spring. On the one hand, some buy prices have tapered off as vendors have been able to restock key cards, such as Dual Lands. If the new inventory doesn’t move at higher prices, we’ll see a softening in the market.

On the other hand, perhaps the new round of stimulus, combined with tax refunds, will infuse enough cash to overcome the restocked inventory and create a fresh new wave of demand.

Either way, I am going to watch this market extremely closely, monitoring pricing trends on Card Kingdom’s site as a surrogate for the overall market. I have been strategically buying cards here and there, particularly Alpha rares sub-$200 (there won’t be such a thing eventually) and playable Beta rares at decent prices (there pretty much aren’t any left). I’m holding anything Old School that has little or no inventory on TCGplayer in case vendors sell out and prices tick higher yet again.

At the end of the day, agility is going to be key here. If you are the buy-and-hold type, you’re likely fine to just throw your Old School cards in a box for another five years. But with my end goal of funding two college tuitions for my children, I’m going to be actively looking for chances to trim the collection when I see prices hit local maxima. If your goal is to raise cash from Magic to fund other things in life, you may consider doing the same.

2 thoughts on “Will History Repeat Itself This Time?”