Back on May 22, 2012 I wrote a provocative piece about a tiny sliver of the Magic market—one that was rarely in the spotlight up until then. The title of the article is “The Rise of the Alpha Rare”, and it discussed the relative scarcity of rare cards from Magic’s earliest set, Limited Edition Alpha. At the time of its publishing, I’ll admit I was actually nervous about the article and how it would be received.

Think about it. I went out on a limb and advised people to purchase cards like Fungusaur, Two-Headed Giant of Foriys, and even Lifelace. This was during a time when Legacy was exploding, Innistrad block was the most recently released in Standard (a very popular block for both Standard and draft), and Commander was taking off. So for me to go off script and write about bulk rares from 1993’s debut set felt misplaced. 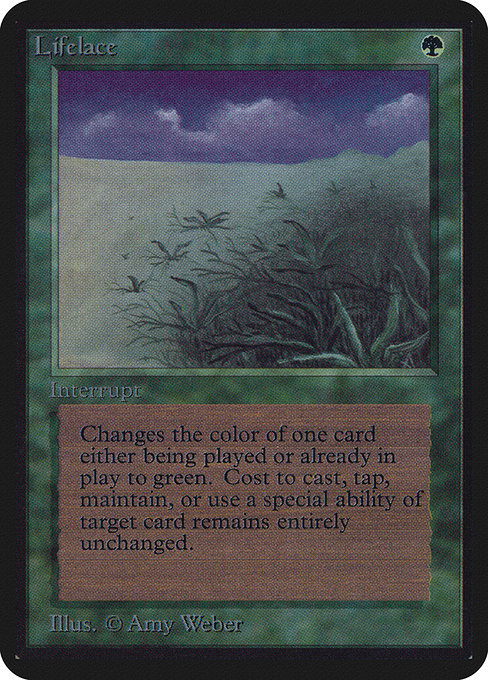 I even remember reaching out to the CEO of Quiet Speculation himself, seeking validation that this would be a wise topic to write about. He gave me the thumbs up, and I went with it.

Since then, card prices from the old set have skyrocketed as interest in owning a piece of Magic’s history reached new heights. What seemed like a risky idea back in 2012 has turned out to be one of my greatest calls in the history of my MTG finance career.

By the way, I also discussed how a PSA 10 Alpha Black Lotus had recently sold for $20,000. Nowadays that card would probably sell around $500,000 at auction.

In the article, I didn’t even recommend the “best” rares to acquire. I wasn’t confident enough in my prediction to recommend Commander staples and Reserved List cards over unplayable chaff. Earthquake was just as viable as Lifelace, and the article reflected this indecision. It’s incredible how narrow-sighted, yet truly foretelling my predictions were.

I have bought and sold many cards throughout my Magic “career”, especially starting in around 2010 when I really began focusing mor eon the financial aspect of the game. But the cards I regret selling the most were the near mint Alpha rares I purchased around the time of that article’s publishing. Tempted by short-term gains and arbitrage, I flipped some of my favorite Alpha cards in gorgeous condition. 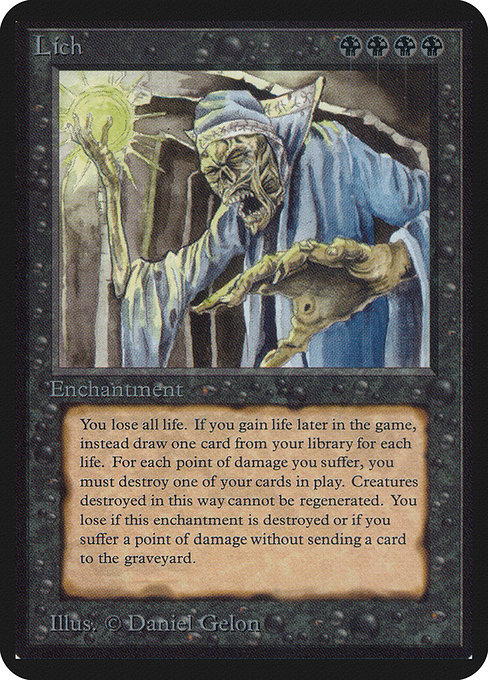 Now I’m left studying this Alpha market and doing a double take with every price increase. Most recently, Card Kingdom and ABUGames have jacked up their buy prices on Alpha cards across the board. There are virtually no reasonably priced Alpha rares left in stock on TCGplayer, and many eBay listings are for exorbitantly priced, graded cards in an effort to capitalize on an illiquid market. 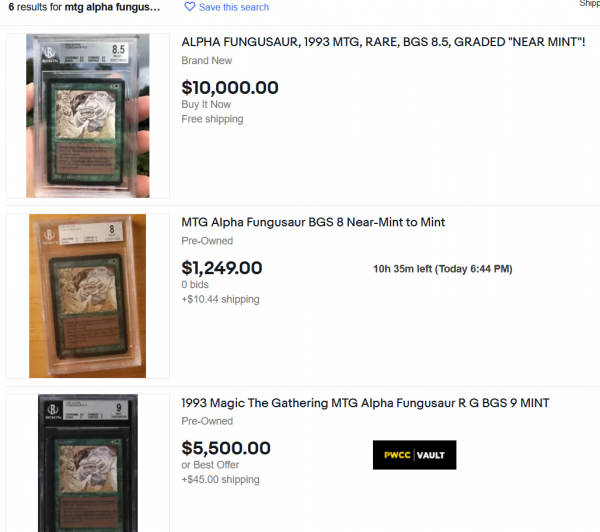 Tips When Shopping for Alpha

Are you actively in the market for Alpha cards? If so, I feel your pain. I once had an amazing collection of Alpha cards, and when their prices spiked last time (a couple years ago) I cashed out. The move felt brilliant at the time, because prices settled down in the ensuing months. But as of today, with how hot the Alpha market has become, I regret the move.

Luckily, I have been able to locate a few sparse deals on Alpha cards, helping me return my modest collection to a fraction of its former glory (a small fraction, but anything is better than nothing!). Now that Alpha cards are so sparse, hunting for them can be tricky. In my experience, I’ve come up with a couple strategies that could help.

First, you need to know where to shop. Up until this month, ABUGames’ Alpha prices were actually lower than the market. Of course, they were also sold out of nearly every Alpha card outside Scavenging Ghoul for some bizarre reason. 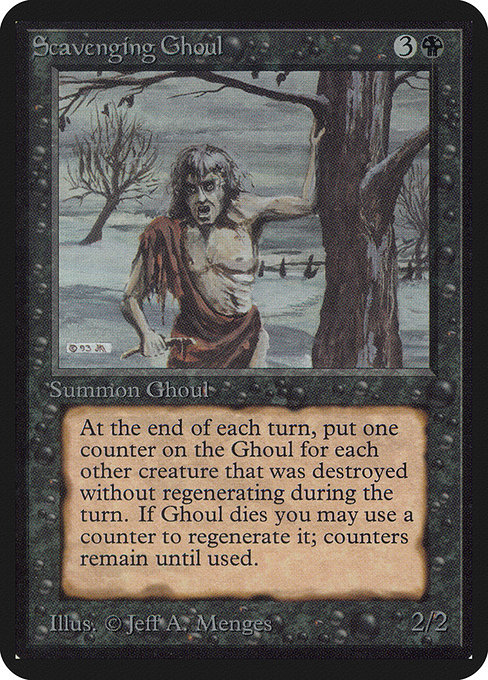 Now they’ve increased their buy prices on the set, so they will start to bring in more Alpha cards. Of course, their sell prices won’t be discounted to the market anymore, but there’s still a path to follow. They increased their Beta prices in step (and possibly Unlimited…I haven’t researched those lately). So while straight-up purchasing Alpha cards from ABUGames may not be as attractive, you may be able to work trades to acquire the Alpha cards you’re after.

Not all their Alpha rare prices are insultingly high, either…especially if you’re not picky on which rares and the condition of the copies. They recently restocked an HP Alpha Kudzu and HP Alpha Aspect of Wolf that I jumped on with some cash. They weren’t the deals of the century, but they were certainly cheaper than any other copy for sale on the internet.

You could also browse Card Kingdom’s inventory, but be prepared for a) very little stock and b) frighteningly high prices. The exception may be their “Good” condition (i.e. heavily played) prices. Those remain significantly cheaper than their nicer copies, and could offer a reasonable purchase. I had been in the market for an Alpha Farmstead, but they pretty much disappeared from the internet. The cheapest copies I could find were nearing $600 and either from cardmarket.eu (I would need intermediary help) or a Canadian eBay seller with two feedback ratings. 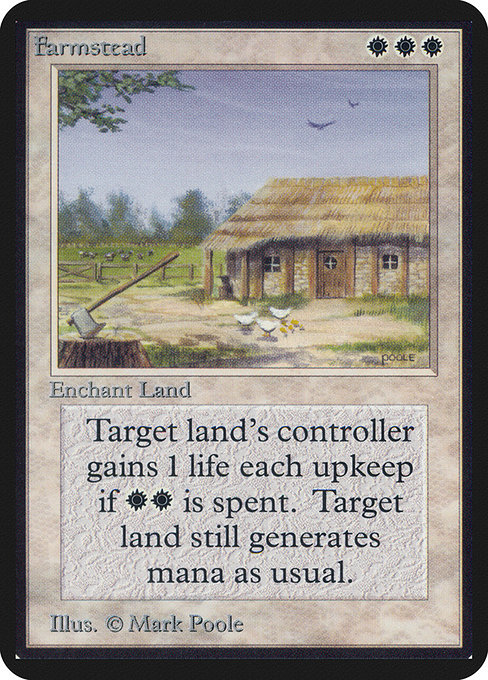 Then I noticed Card Kingdom stocked a “Good” copy with a $400 price tag. Maybe I should have thought longer, but I decided to pull the trigger then and there. This feels like a rash purchase, with a bit of FOMO to boot, but I can’t help but wonder…in another nine years, are all these Alpha purchases of mine going to look brilliant again?

If you’re shopping for Alpha and want a better selection, you could look to Channel Fireball, which has a decent inventory of the set considering its rarity. But their prices are so high now that it’s hard to advocate shopping there. I know Alpha cards are hot, but I can’t bring myself to pay $27 for a lightly played Wall of Wood or $642.60 for a lightly played Deathlace. The market has run up very fast, but we’re not there just yet.

Lastly, you could browse eBay and TCGplayer for Alpha commons and some uncommons. That may be your best bet in finding the cheapest, heavily played Alpha cards. Or else you could shop around on Facebook and Discord groups—every once in a while, someone lets go of their Alpha cards and anything listed at a fair price is immediately scooped up.

I have never been more confident in holding Alpha cards as I am today. When I wrote my first Alpha article back in Spring 2012, I did so with trepidation and hesitancy. Would people be open-minded about paying nearly $100 for a garbage rare like Two-Headed Giant of Foriys? How could I advocate such a purchase? I even cited buylists as my safety net—paying $55 for a near mint Alpha Two-Headed Giant of Foriys can’t be bad if Star City Games pays $60 on their buylist! Just flip for arbitrage if needed. 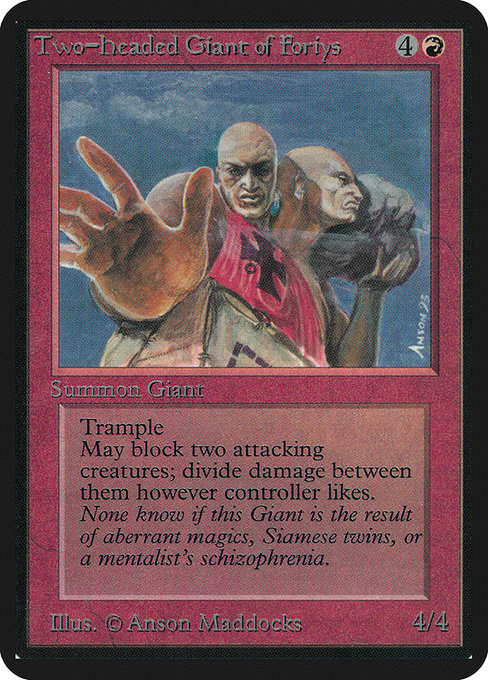 How naïve I truly was.

Now, shopping for 2021 feels very late to the party. But this is a party that will last a long time. In fact, I expect many of my Alpha purchases in 2021 to appreciate nicely over the next nine years. In 2030, we very well could be looking at the cheapest Alpha rares starting near $1000 and commons approaching $100. Relatively speaking, that’s not even that high of a price to own a piece of Magic’s history: its very first set release ever.

The older Alpha cards become, the more copies will disappear into collectors’ hands. Many Alpha collectors view their cards not as investments, but as cherished possessions worth holding for life. The same is true for other Old School sets, but it feels like Alpha collectors are especially dedicated to their collections. And while people will always be selling in order to fund a sizable real-life purchase, the number of people willing to do that will dwindle over time as Alpha cards consolidate into fewer collections.

Therefore, I don’t plan on selling many more Alpha cards unless they’re funding purchase of other Alpha cards. And I plan on shopping around continuously for the occasional deal on any Alpha card I can. I suspect there are a number of collectors in the same boat as me. As the set becomes older and older, the quest to find the occasional Alpha deal becomes tougher and tougher. Barring complete collapse of Magic, I just can’t see any event that would cause the trend to reverse.

If you think about it, nine years isn’t that long in the grand scheme of things. That’s not even one-third of Magic’s lifetime. Yet in that time, we saw multiple rounds of explosion in Alpha prices. What seemed like a speculative idea at the time has since become one of the best-aged articles I’ve ever written.

Now, in 2021, I’m not changing my tune. In fact, I am singing it louder and more clearly. Alpha cards (especially uncommons and rares) are truly scarce and will only become more so in the years to come. If Magic is still alive and well in 2030, and I see no reason it wouldn’t be, I believe Alpha prices will make yet another leap in value.

That doesn’t mean I advocate rushing to Channel Fireball and Card Kingdom and purchasing every over-priced Alpha card they have in stock. We still need to be smart when shopping around. That’s why I provided a few ideas on where to shop and how to go about acquiring these rarities. With enough money, I suppose any Alpha card could be purchased. But for those of us (including myself) without excessive financial resources, we need to shop wisely and carefully, hunting for the best deals.

I tried to share my approach to Alpha shopping for others to reapply. It’s becoming more and more difficult finding deals as the market dries up. But there is hope: perhaps when large Magic events resume, a smattering of Alpha cards will return to the market. This could help bring prices back down, momentarily. I’ll certainly be tracking the market closely when that happens, and I’ll report back in articles what I find. Until then, I wish Alpha collectors the best of luck and happy hunting!

6 thoughts on “A Resurgence in the Alpha Market”