Last week, Wall Street investors closely scrutinized a data point that had profound implications on the stock market. The chart of this metric looks akin to a Reserved List Magic card during a buyout, but I assure you this is not the case.

The chart is in fact a depiction of America’s inflation rate using the Consumer Pricing Index (CPI) reported by the Bureau of Labor Statistics. 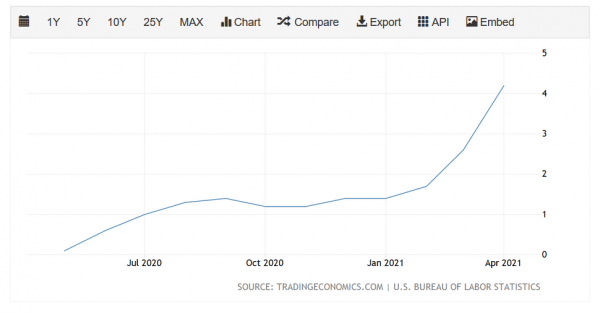 As you can see, the CPI number for April 2021 came in extremely hot, well above the trending data from the past year and the highest it’s been in over ten years. Is this cause for concern? What will the impact of inflation be on the collectibles market? I honestly wasn’t sure, so I googled exactly this and I stumbled across a New York Times article from 1978! This week, I dust off that article and highlight some key insights that apply today to a market that didn’t even exist when it was written: the Magic card market.

Well, there are two sides to this debate. Some say this inflation is transitory and reflects expected adjustments in prices as the economy re-opens following 14 months of hibernation via lockdowns. This group of individuals aren’t too concerned about the data point and expects the number to retrace. They point to some of the most influential prices that drove up the CPI number so drastically: gasoline, hotels, used cars, airfare, and the like.

The argument here is that these prices were all suppressed for months while everyone stayed at home under lockdown conditions. Now that the economy is opening up again, people have pent-up demand for travel and lodging, hence the increase in airfare and hotel costs. Gas prices also will rebound with this new demand, and the pipeline hack didn’t help the situation. Lastly, the automobile market is overheated right now because of the worldwide chip shortage, and this is inflating used (and new) car prices.

In theory, once the market equilibrates, inflation will return to a more modest value.

Others are not so confident in this hypothesis. There’s a group that’s truly concerned that inflation is going to run away from the Fed, interest rates will have to rise to combat rampant inflation, and this could lead to a recession. This group was the more influential one for most of last week as stocks sold off, though there was a nice recovery on Friday as buyers came in to take advantage of the dip.

Either way, at least for now it looks like we have some inflation on our hands. As I observed the CPI value make waves in the stock market, I couldn’t help but research what the impact may be on the value of my Magic collection.

When I googled the impact of inflation on collectibles, this was one of the first matches: a New York Times article from 1978. How relevant is this article to the Magic market, which didn’t even exist until 1993? Surprisingly, there are some pretty valuable nuggets of insight! 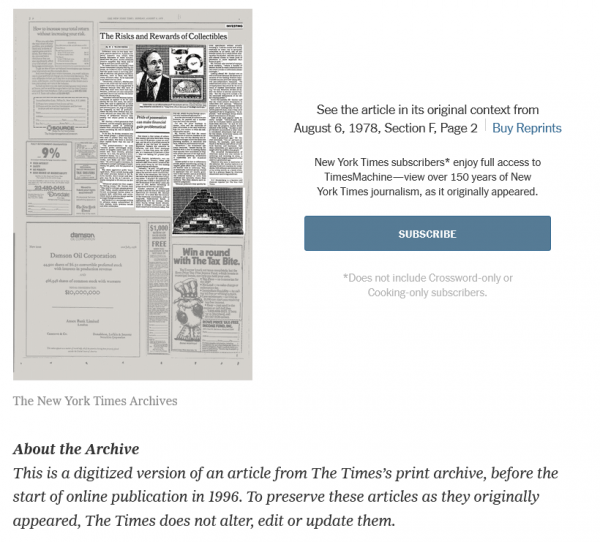 The article opens with a reassuring sentiment: “…all collectors have traditionally had the inside track in surviving periods of inflation and general monetary disarray, such as those that beset many investors today.” It’s interesting how history repeats itself, right? If I had just inserted this comment in an article I suspect I could have passed it off as something written in May 2021 and not August 1978!

The author goes on to say, “Intuitively, collectors, whether passive or not, know that the values of tangibles invariably rise during periods of inflation because what they have or what they want costs more each day. Besides, collectors are also consumers and don’t have to be told that the dollar buys a bit less each day.”

But it gets even more interesting in the next paragraph, where it’s explained that portable and private collectibles tend to appreciate in value fastest! The author provides examples of portable collectibles, such as coins, art, rugs, or stamps. Of course, Magic cards would also fit into this category. The explanation passes the sniff test, in my opinion. If sitting in U.S. Dollars loses purchasing power over time, there’s motivation to store value in alternate assets. The more portable, the easier to manage. Magic cards would fit this bill nicely…the dollar may drop in value, but an Underground Sea can preserve value while also offering utility in the meantime!

The article goes on to explain how some investors are more aggressive and seek out leveraged deals. “Today, usually conservative collectors increasingly borrow money to acquire both collectibles and investments such as precious metals and stronger foreign currencies.” In 2021, I would lump cryptocurrencies in that bucket as well.

But are people really taking out loans to speculate on Magic cards? It’s been done in the past, so it wouldn’t surprise me. Though, I suspect some of the more enfranchised investors/speculators don’t need loans to put a dent in the Magic market.

The next section of the article describes numbers that definitely don’t represent 2021! The fixed mortgage rate (in New York state) is cited as 8.5 percent, which is way higher than where they are in America today. And gold’s price ad recently “soared” to $207.50 an ounce, about one-eighth where it trades today. What’s more, gold hasn’t been rallying with the recent bout of inflation—it could be because people are using cryptocurrencies as their inflation hedge instead, but that’s a topic for another day.

Words of Wisdom from the Article

The New York Times article proceeds to describe “a number traps [SIC] that await the unwary.” I bet these are relevant to the Magic card market today, even without reading through the entire article beforehand!

The first caution from an investment specialist interviewed for the article is “people buying collectibles with a view to making money must consider their purchases as long-term affairs because of the high markups.” This could not be more well-put for Magic cards today! Prices of Reserved List and Old School cards—some of the most investible—have already appreciated significantly in the past year. Inflation could mean higher card prices, but it may take a while because prices are already pretty lofty. While vendors will continue to buy and sell cards to pay their bills and make money, the hobbyist investor may require more patience for prices to stabilize and then, eventually, climb higher.

The second caution in the article is that “in inflationary periods people transferring savings to tangible goods often select items they are familiar with as collectors…this often distorts one’s investment judgment. Because collectors may quickly become speculators without actually realizing it, I advise clients with strong emotional or other ties to particular collectibles to sit down, cool off and breathe calmly for a while before chasing after the market.”

This paragraph resonates most of all! How many times have I written about the pitfalls of letting emotions cloud judgment when dealing in Magic finance? If you’re looking to save/make money, you’re best off avoiding emotions altogether. Unfortunately, this is particularly difficult when dealing in Magic cards because we often get attached to the cardboard—especially those cards that are in decks! If you’re going to invest in Magic cards with the end goal of financial gain, you need to be willing to sell cards at the exact time when they’re most exciting to own. If you don’t want to do that, that’s perfectly fine. But know this about yourself when making those purchases, and go into each purchase with a planned exit strategy, whether short term or long term.

The final warning is also 100% applicable to the Magic card market: “Mr. Sinclair also warned of manipulated markets, ‘where a handful of dealers skilled in mass communication can create trends in collectibles almost overnight.’”

Does that happen in MTG finance? You bet it does! 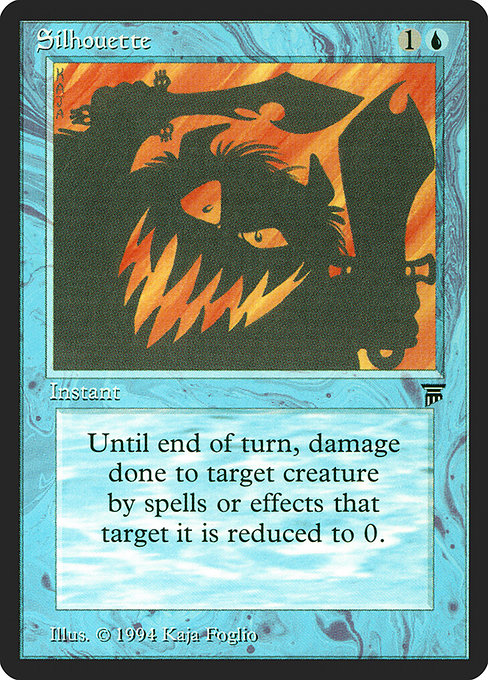 Vocal community members with a large social media presence can easily manipulate card prices, whether intentionally or unintentionally. We also see common behaviors with manipulation of prices on TCGplayer, where a card is bought out and then re-listed at a 500% increase. This causes the card to “spike” on MTG Stocks, and some naïve investors may take that as a buy signal, chasing prices higher. This article could not be more spot on in describing Magic cards!

The New York Times article goes on to state that inflation will be here to stay because it’s inherent in how our government is set up. I won’t get into the politics of it all, but it’s safe to say the US Dollar will be worth less in the future than today.

“Given this outlook, Mr. Sinclair said that the trend toward investments in collectibles will continue. ‘Whenever economic or social conditions, worsen, people yearn nostalgically for the so-called good old days, even if they were figments of one’s imagination,’ he explained. ‘And nostalgia always draws people to mementos of the past.’”

This statement resonates with me completely. It’s precisely why I have really cherished my Old School collection. Even if we put aside the investment prospects of a Black Lotus, there’s something to be said for the nostalgic factor. Owning a card as an adult that I always wanted as a kid but could never afford is one of the most fulfilling aspects of collecting Magic cards. I don’t think this feeling is going away anytime soon, which is why I believe Magic cards remain excellent investments (even if we put inflation aside). The same can be said for nostalgic video games, comic books, or any other collectibles that we grew up desiring and can now afford as adults.

This factor alone can drive prices upward for years to come. And this nostalgia is so strong, that I could honestly see it outlasting Magic as a game. Hasbro could stop printing cards today—there would probably be some panic selling, but I expect many card prices would remain robust (or even climb higher given the guaranteed stoppage of supply) because the game will always have a spot in many players’ and collectors’ hearts. It’s this driving force, above inflation, that gives me confidence in the long-term prospects of a Magic investment.

One thought on “Inflation’s Impact on Your Magic Investment”