This past Sunday, The Hooglandia Open gave many a first look at post-rotation Standard. 95 players playing on Arena brought their best brews to the table in a double-elimination event organized by Twitch streamer Jeff Hoogland and broadcast on his channel. With Thrones of Eldraine and company gone, the remaining sets in Standard finally had their chance to shine alongside newcomer Innistrad: Midnight Hunt. Let's look at what cards players brought to the table. Are these the new cards to beat?

It was exciting to see many new cards in the spotlight for the first time, but a couple of established cards that survived the rotation are now likely poised to dictate the shape of Standard moving forward. These include cards like Goldspan Dragon and Alrund's Epiphany. 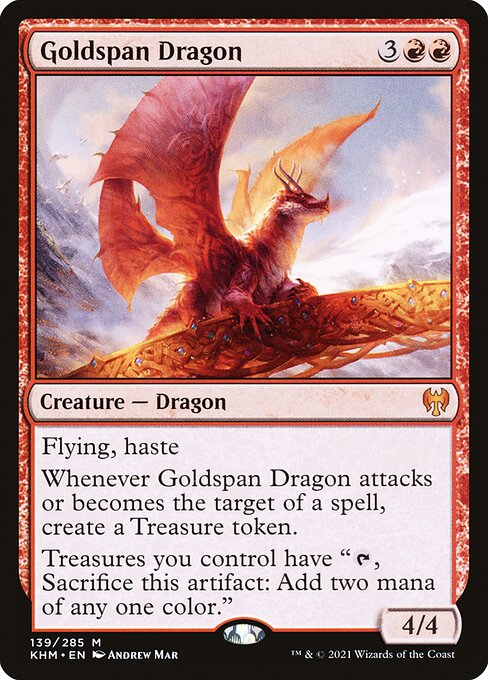 Goldspan Dragon is still a large hasty finisher that can close out a game on its own. It's on a shortlist for the title of the most powerful card in Standard, as attested by the variety of decks it slots into. At the Open, this ranged from Gruul Aggro to Jund Midrange, to the post-rotation version of Izzet Dragons. If you want to curve into big creatures, there doesn't seem to be a better top-end than Goldspan Dragon if you're in red. 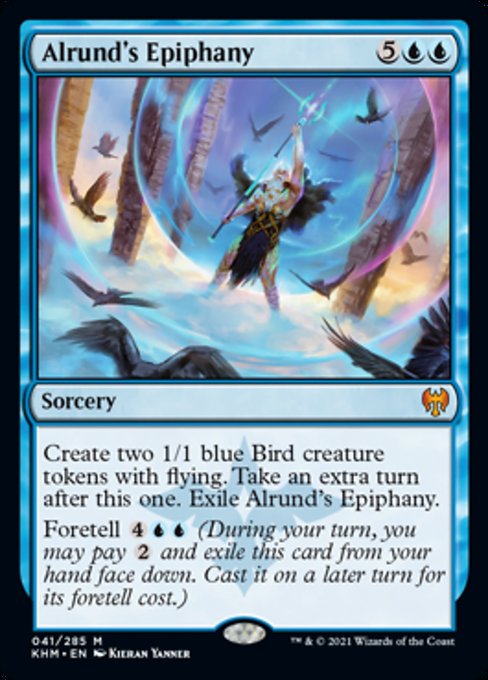 One of the driving cards of the Sultai Ultimatum deck prior to rotation, Alrund's Epiphany is good whether you are ahead or behind. While the decks that performed with Alrund's Epiphany at the Open were Izzet Dragons and Simic Midrange, It's likely blue-based control decks will want this as well. Creating a finisher, and allowing the control player to reset their mana sounds great in a format that so far lacks an obvious control win condition. There is one card though, that might be able to claim that position. 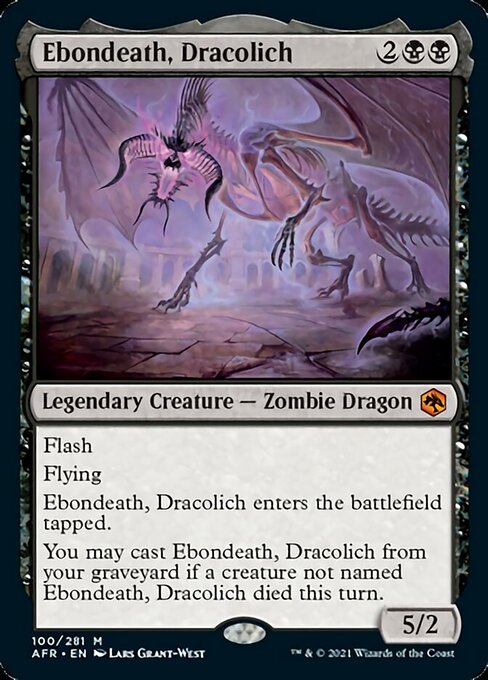 Ebondeath, Dracolich is one card high on my radar. Only a sideboard card in James Rutherford's second-place Orzhov Midrange deck, it's easy to imagine the recursive Dracolich as a possible control finisher, or as the top-end in the main deck of a black-based aggressive deck. A very different kind of four-mana creature in tournament winner Christopher Williams' deck is also getting time in the spotlight. 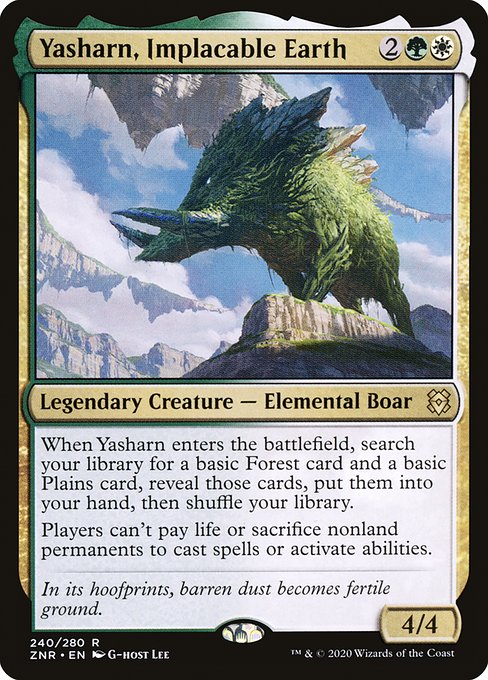 Virtually all the big mana decks prior to rotation wanted to be Sultai colors. Yasharn, Implacable Earth suffered from being in the wrong color combination and saw little play. With Emergent Ultimatum gone from the format, it's more likely that big mana decks like Williams' will be Selesnya or Naya-colored moving forward. This is great for Yasharn. The four mana 4/4 will be right at home fixing mana or beating down opponents in those lists. It's not the only green card taking off in popularity though. Another green card that quietly saw play prior to rotation has now emerged into the spotlight. 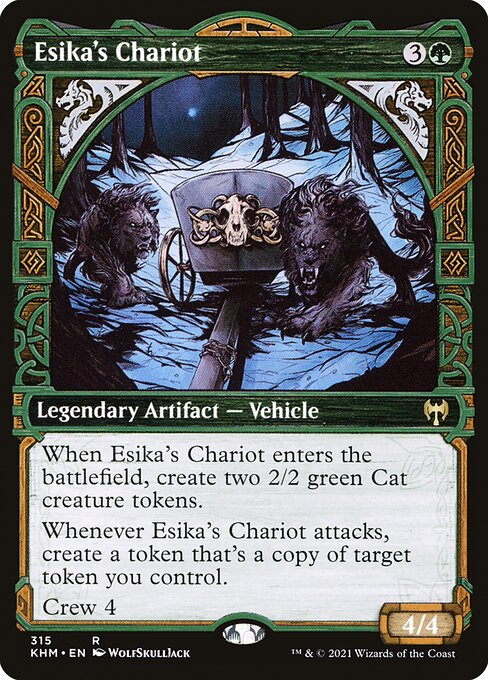 Alongside Yasharn, Esika's Chariot was a big part of Williams' winning deck in the Open, and with good reason. Great on defense, and even better on offense, the Chariot is poised to turn a game around or shut the door on an opponent almost the moment it hits the battlefield. The Chariot is protected from most sorcery speed sweepers by virtue of being a vehicle, making it a resilient threat. I won't be surprised if it becomes the most-played green card in Standard. It also pairs fantastically with a new green five mana threat, which we will get into.

New to the Festival

While rotation has brought a number of existing cards to the spotlight, Innistrad: Midnight Hunt has also brought a number of new guests to the party. Here are a few that made waves in the Hooglandia Open that are worth keeping an eye on for the future. 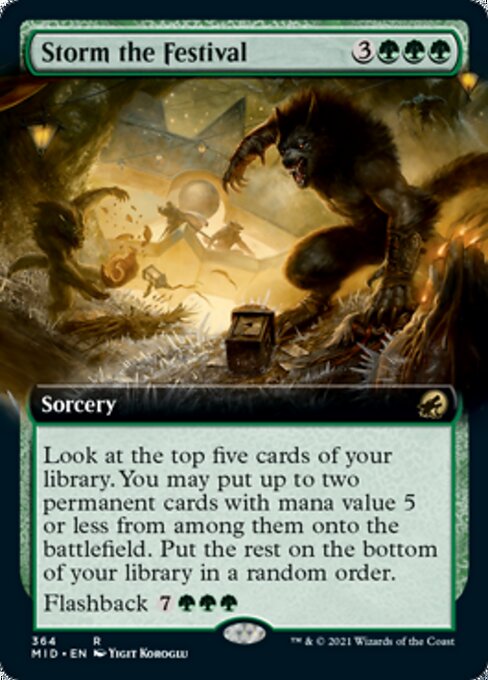 While it wasn't fully responsible for winning the day, this explosive card made for some of the most exciting moments of the Hooglandia Open. Storm the Festival is like a massive Collected Company. Though only Sorcery speed, the ability of the Festival to hit any permanent of Mana Value five or less allows this to drop massive haymakers like Esika's Chariot into play and take over a game. The ability to hit any permanent also means that this card never whiffs 100%, though hitting lands or mana dorks is much less exciting than slamming a Chariot, or the next card in our discussion. 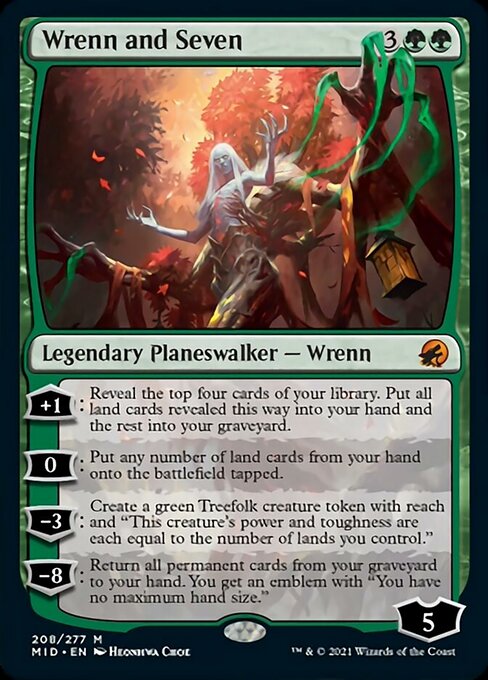 There are 19 planeswalkers in Standard post-rotation, including the newest additions from Innistrad: Midnight Hunt. Of all of them, I feel like Wrenn and Seven is the one poised to be the best in Standard. Its token-making ability pairs excellently with Esika's Chariot's token copy ability. The two together are a potent duo. Both can also be cast for free together off a single Storm the Festival, as Open winner Christopher Williams' tried to do with his deck. Wrenn wasn't the only planeswalker that saw considerable play in the open though. Here's a couple of others that also caught my eye. 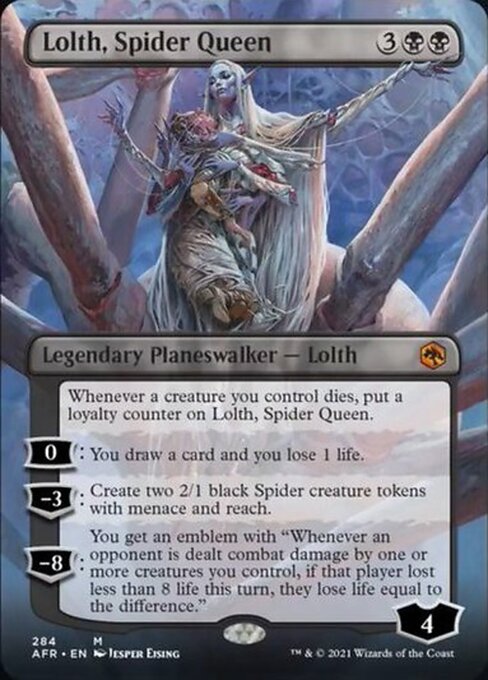 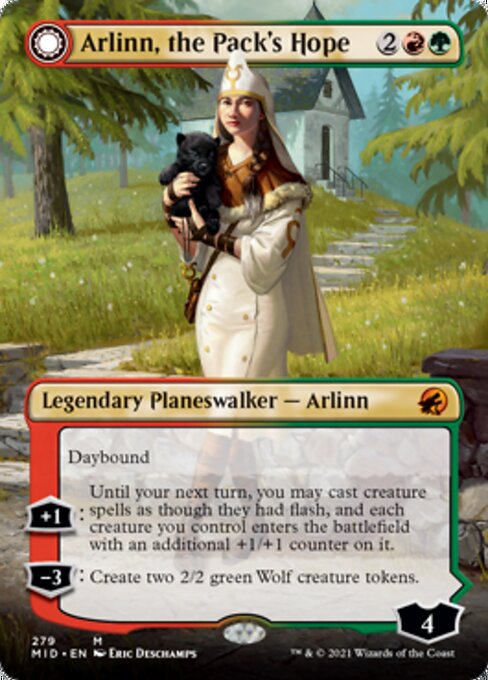 Lolth, Spider Queen, and Arlinn, the Pack's Hope // Arlinn, the Moon's Fury, both had considerable success in a variety of decks at the Open. One player, Johann Ayala Serrano, even paired the two up with Wrenn and a bevy of other Planeswalkers in his Jund Super Friends list. Serrano finished 26th in the Open. Serrano's list is worth considering If you're interested in slamming powerful planeswalkers onto the battlefield. Whatever planeswalkers you're contemplating playing though, the ultimate litmus test for all of Standard may come down to how well your deck is capable of answering a one-mana 3/2 flyer on turn one.

Delver of Secrets is back in Standard! Matthew Garner made a deep run in the Open, piloting an Izzet list featuring Delver, Goldspan Dragon, and Alrund's Epiphany to a 9th place finish. Garner's list is designed to curve into larger and larger threats. The strategy worked well for him, but I'm not sure if his list is the ideal Delver shell or a Goldspan Dragon deck that happens to also have Delvers. Whatever the case, I'll be looking out for more streamlined Delver lists in the coming days. In the meantime, I've already crafted my copies for use on Arena and can't wait to beat down with insects in both Standard and Historic.

What cards are you most excited about in Standard? What cards do you have on your radar to play or to speculate on? Let me know in the comments or on Twitter.