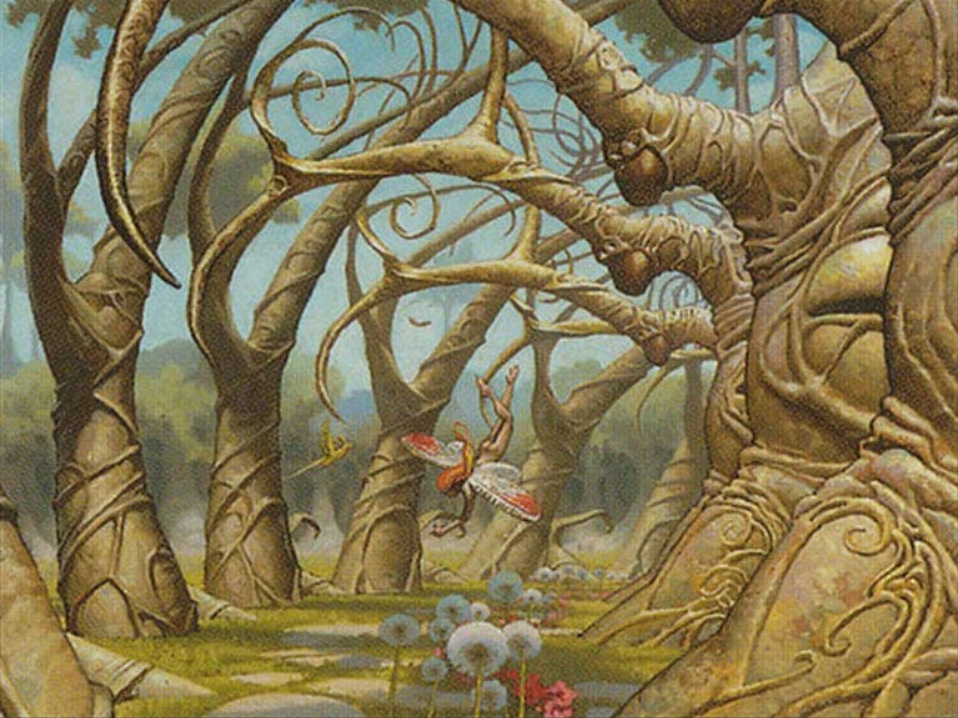 Something is brewing in the MTG finance world. After a steady pullback from highs, many Reserved List cards are bouncing, and bouncing decisively. Card Kingdom is acting on this movement, increasing their buy prices across the board. For example, Gaea's Cradle is posted now with a $715 buy price, more than $100 higher than it was just a couple weeks ago.

I’m going to monitor this trend closely, and I’ll report back if I see anything noteworthy. But in the meantime, I want to go off-script a little bit this week and dust off part of an article I wrote nearly five years ago. The article was published on October 10, 2016, and was titled “Alternate Investments Worth Consideration.” At the time of its publishing, the article was locked for Quiet Speculation Insiders only.

Not this time—I’m unlocking that piece and sharing some incredible trends that have occurred since 2016.

In 2016, I discussed the massive augmented reality gaming trend that took over the world for a couple weeks: PokémonGO. I remember when this game first deployed, and every park and public placed was filled with players eager to “catch ‘em all.” After it’s initial release in July 2016, popularity of the game rapidly dropped off to a steady state.

Since then, the game’s following has remained robust. I may have abandoned the game altogether, but I’m shocked to see how popular it remains amongst the gaming community. In fact, my son and spouse still play the game religiously, despite not being your traditional “gamers”. In October 2016 I predicted growth in Pokémon cards because of PokémonGO’s popularity. I shared the below chart in the article, depicting the growing price of Base Set Charizard: 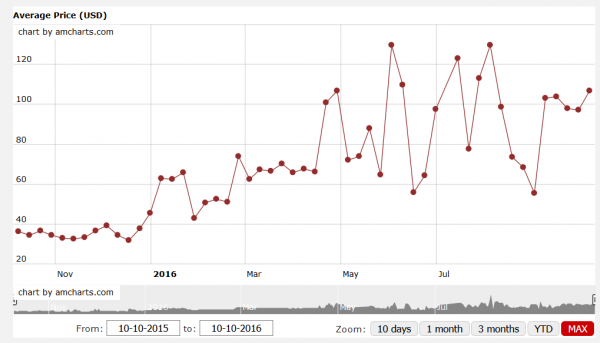 I couldn’t find the comparable price chart to above, but I did track down a different pricing website. This site plotted the value of graded copies of the Charizard card, but I didn’t want high-grade cards to warp the values. So I hid all the highly graded copies so we can see value trends of “player’s copies”, if you will.

It looks like the card’s value may have gradually and subtly increased over a couple years after my article’s initial publishing. Then in 2020 these card prices took off (along with most collectibles markets). Even a graded 5 copy can fetch nearly $1,000. This may not be the perfect apples-to-apples comparison with the previous chart, but the fact of the matter is Pokémon card prices have skyrocketed since 2016.

The real inspiration for my article this week stems from this second bucket: the vintage video game market has been exploding! I track my collection’s value on a weekly basis using the GAMEYE app—if you don’t have this app and you collect older video games, I highly recommend this one. It pulls data directly from pricecharting.com, a valuable video game pricing website.

Back in 2016 I talked about my two favorite gaming consoles: Sega Genesis and Sega Saturn. For each, I shared a price chart showing the “index” of video games for each system. Let’s see how those have fared since. First, let’s compare the before and after charts for the Sega Saturn.

Once again, I can’t easily find the same exact chart, but the Sega Saturn index below does a very nice job capturing the general trend. 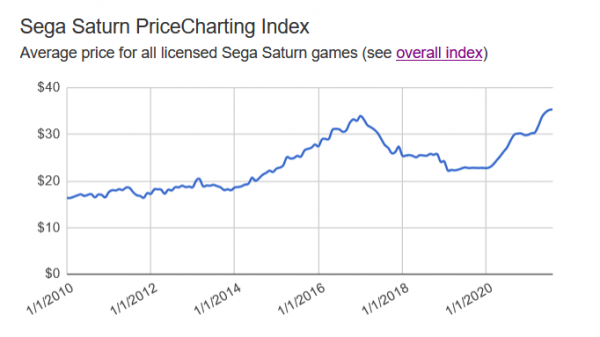 The first plot only covers parts of 2015-2016, whereas the second plot above dates back to 2010. Interestingly, at the time of publishing my alternate investment article, Sega Saturn prices were booming. It looks like they actually peaked just a couple months after, in early 2017, before pulling back significantly. If you had bought video games after reading my article, you may have been disappointed in your returns over the following four years.

Now for comparison, let’s see what the average Sega Genesis game’s value has done over the years: 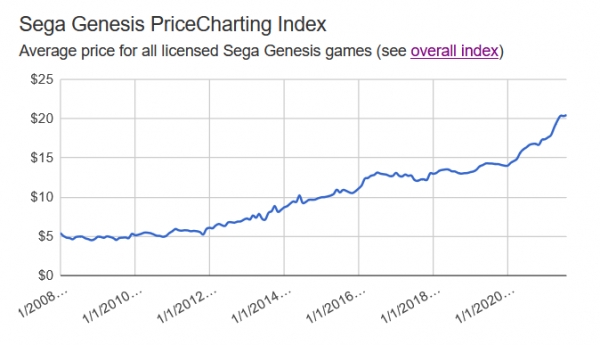 This chart is even more compelling that that of the Sega Saturn index. Since 2016, the average Sega Genesis game’s value has steadily risen, reaching an inflection point in 2020 and suddenly jumping even higher!

Lastly, I mentioned one specific game in my 2016 article: Magic Knight Rayearth. At the time, complete copies of this game sold for a little north of $300. Loose copies sold for a little more than $100. What are these games worth now, five years later? Here’s the five year chart:

There’s no doubt that the video game market remained strong after I mentioned it in 2016. While I could never have predicted the effects of COVID-19 on the collectibles market, the fact of the matter remains: video games purchased in 2016 should, on average, be worth significantly more in 2021.

One Caution on Video Games

The chart above is inspiring—it gives me the confidence that if I purchase a collectible video game now, it’ll be worth more five years from now. It’s easy to get caught up in the hype of the exponential part of the curve above, and fear of missing out could start to kick in.

Before diving in and buying your childhood favorites at these inflated prices, however, I need to highlight one word of caution that fellow Quiet Speculation writer Paul Comeau called out recently.

The author of this video alleges that the recent move in video game values could be an artifact of an artificial pump and dump scheme, of sorts. Rather than delve into the intimate details of this video’s claims, I’d encourage you to check it out—it’s lengthy, but interesting and well-produced if nothing else.

The title gives you the TL;DR: “Exposing FRAUD And DECEPTION In The Retro Video Game Market.” This isn’t a lunatic conspiracy theorist with nothing better to do, mind you. The video has over 1 million views, and some of the points he makes are compelling.

Could the video game market be experiencing an artificial source of growth due to market manipulation? It’s possible. I’m certainly not about to purchase costly, graded copies of video games. I’m a firm believer that vintage video games are meant to be played, not graded and placed in hermetically sealed cases. I suppose there could be a halo effect—graded copies skyrocket in value, bringing up the average value of played, loose copies.

I’ll keep an eye on trends in this space for sure, but I still believe a lot of the growth since 2020 was driven by COVID-19 and the fact that there as a lengthy period of time where there was nothing to do but stay at home. Nostalgic video games were (and still are) a perfectly safe and enjoyable activity during a pandemic. Add in the fact that the government keeps pumping out money and sending support checks to the majority of the country, and you have record levels of disposable income people have to spend on collectibles.

Now one big moment of reconciliation for this market could come when the world finally does resemble something more “normal”. If everything re-opens and people migrate back towards their previous spending habits, shelling out cash for things like cruises, travel, vacations, concerts, and sporting events, we’ll have to see what happens to the video game market. Will the new nostalgic video game collectors sell their games to fund other activities? Or will they hold onto the games for occasional play?

If I had to guess, I’d predict the latter. I think nostalgia is a powerful motivator, and even if people stop spending money on video games, they will be inclined to keep those they had already purchased. This will keep game inventories at a steady state—if there’s no surge in inventory returning to the market, prices should remain stable. I don’t expect 2022 to follow the current trend of 2021, and there could be a healthy pullback, but prices in this space won’t suddenly collapse.

I can’t say the same for the market on highly graded copies of games—those are really out of scope for me. I’m perfectly content playing my old games with the option to sell for more money a few years later. I’m not in this to make millions. Just like with Magic, my aim is to enjoy some classic video games while also making a little money, helping my hobby stay just a little cheaper.

When I wrote about investing in older video games back in 2016, I could never have predicted the impacts of COVID-19 and the 2020-2021 explosion in game values. But here we are. Many of the games I purchased 2016-2019 have jumped up significantly in value since. If any of my readers followed suit after reading my article, and they hung onto their investments for at least a few years, they should also be sitting on some healthy gains.

If you asked me to project out the next five years, and to make a recommendation of whether or not one should buy, hold, or sell, I’d say my answer would depend. If you’re already sitting on healthy gains and you have no interest in actually playing these older games, I wouldn’t fault you for looking to sell in this overheating market. You’re likely to fetch a very attractive price given the exponential growth of 2021.

However if you still enjoy these games and the nostalgia they bring, I’d hold. Prices may pull back some, but they’ll likely return to growth again at some point. To draw an analogy to Magic, many of the games I collect are effectively on the Reserved List—no one is printing copies of Magic Knights Rayearth anymore. Even if something akin to a “Sega Saturn Classic” were to be released, I don’t think this would damage values of the original games. As long as no one goes out and makes more identical copies of the original game, these will only get rarer and harder to find as they age. For this reason, I’m holding my games for the time being.

Of course, one of my favorite lines is, “Everybody has a price.” These games could theoretically get to a price point that’s so attractive that I will feel compelled to cash out. Let’s just say that, for now, we aren’t close to those values and I don’t anticipate we’ll get there anytime soon. But if we somehow do, and Magic Knights Rayearth suddenly starts selling for north of $2000, rest assured I’ll be sure to write a follow-up article on the trend and its implications. Let’s cross that bridge if we get to it.