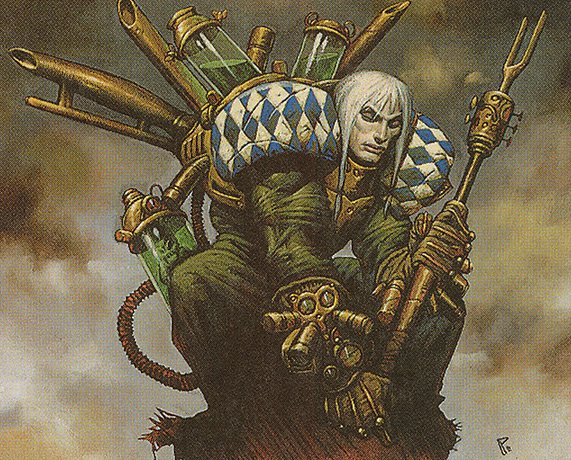 The recent reveal of Innistrad: Double Feature's contents took my excitement for the set from 100% to 0%. The teaser hype when the set was announced led me to believe it was a curated draft experience combining the best of Midnight Hunt and Crimson Vow into a single set. Instead, Double Feature smashes the two products together without any form of curation and prints them in awkward grayscale. A recent tweet by @ghirapurigears really drives home the point:

Double Feature doesn't selectively combine the two sets as I'd hoped. Instead, it reprints all the cards from both sets, including the duplicate cards. Double the Evolving Wilds; double the Bramble Armor; double the Snarling Wolfs. Even in grayscale, who exactly is clamoring for twice as many Bramble Armors?

My disappointment with the set two months before it's even slated to hit WPN Stores got me thinking. Who is the audience for Double Feature? Why does the set exist? Is it just a cash grab? The fact that the details of the set were revealed before I've even had a chance to play with Crimson Vow at FNM called to mind something The Professor of Tolarian Community College said in the video "Magic: The Gathering Overload" earlier this fall: "In Magic: The Gathering, preview season never ends." He was right, but that wasn't what irked me. Instead, it was the feeling that this product was so superfluous. It drove home some of the sentiments expressed by Spice8Rack in their video "There Is Too Much Magic: The Gathering Product."

I thought Spice8Rack and The Professor's videos were interesting when they came out, but it felt to me like they were exaggerating the problem. Magic is good, right, so more Magic must be better? I thought. Now, the more I think about my disappointment with Double Feature and how extraneous it feels, the more I start to wonder if they were right. Is there such a thing as too much Magic?

A History of Products and Product Fatigue

At one point in their history, Wizards themselves answered that question with a firm yes. The relentless assault of new products that's now the norm represents a radical departure from the stance they adopted fourteen years ago. Beginning with Shards of Alara in 2008, a pivotal set for Magic in many regards, Wizards actually dialed back the amount of product they released each year. Mark Rosewater explained the rationale for reducing the amount of product in a 2008 article, "The Year of Living Changerously," including this graph:

Pictured here is the total number of cards released every Magic year, starting with the fall set and going back to Ice Age in 1995. Wizards apparently decided to slow down upon realizing they were doing a disservice to new players by creating an unreasonably high number of cards for them to grasp. Feedback from existing players had similar sentiments. "We were printing too many cards for the new and established players," Rosewater said at the time.

Flash forward to 2021. Adding together all the releases up to and including Innistrad: Crimson Vow, Wizards has printed over 4,000 cards so far in 2021. This includes premiere releases, ancillary Commander products, specialty products like Time Spiral Remastered, Modern Horizons 2, and the 2021 version of Mystery Booster: Convention Edition. It does not take into account the various Secret Lair products released throughout the year or any upcoming Secret Lairs between now and the end of December.

Taking the 1,791 cards of Mystery Booster: Convention Edition 2021 out of the equation still leaves over 2,000 Magic cards printed in 2021. This is double the number of cards released in the year of the original Time Spiral block, whose size triggered the dramatic pull-back in products and set sizes initiated with Shards of Alara.

More Is Not Always Good

When folks take issue with the volume of Magic product released, it is common for Wizards to respond with a statement along the lines of "well, not every product is for everyone," the implication being that, say, non-Commander players need not care when a Commander-geared product is released. But this sentiment is disingenuous at best. Many if not most Magic players play multiple formats and enjoy the game in a variety of ways. Who's to say who a product is for? Commander players do not exist in a vacuum separate from Legacy players, or Modern players, or Limited players. Modern Horizons 2 had something for all of these players, and the set remains popular months after release.

More cards for all formats is a good thing. At a certain point, though, it becomes a matter of diminishing returns. So many products are coming out now that it becomes difficult to keep track of, never mind spend money on, all of them. How are players expected to keep up mentally and financially? What happens when player apathy sets in? We may soon find out.

In a recent video on his channel Alpha Investments, the host, Rudy, made the claim that sales of Collectors Boosters are softening. "Brand-new sealed product in Magic is being rejected the heaviest I've seen since probably Ixalan, Amonkhet, Hour of Devastation, Iconic, and M25 era of about three years ago," he says. What does this mean for 2022?

Magic in the Future

We already know the approximate release schedule for 2022, and it is jam-packed. How many well-curated, painstakingly-tested sets like Time Spiral Remastered are we likely to get? How many are just two existing products smashed together with a gimmick art treatment like Double Feature? Do products like this contribute to the health and longevity of the game or are they just Wizards making the money machine go brrrrrrrr?

In many regards, it feels like Wizards is more concerned these days with the fast nickel over the slow dime. Pulling record profits is great. No one is saying Wizards shouldn't make money. They are a business that needs to keep their lights on and pay their people. But for some players, the absolute barrage of new products feels overwhelming. Wizards may have succeeded in their drive to double their 2018 revenue, but at what cost? Is all this short-term cash worth the expense of the long-term health of the game as a whole? And what else is at stake?

I don't want to come across as some Magic boomer pining for the good 'ole days. I think Magic, in terms of gameplay, is close to the healthiest and most vibrant it's ever been. I'm excited for all the new Magic product available when it's things like Time Spiral Remastered, Modern Horizons 2, or Innistrad: Midnight Hunt. Those sets delivered the goods, both in terms of gameplay and value. However, if Rudy's claims of softening sealed product sales hold true, I worry that we're reaching a threshold where the sheer volume of Magic might lead to player apathy and even retirement.

Outside of Magic, the greater TCG market is entering a new boom phase. Flesh and Blood, MetaZoo, and a number of smaller games have appeared on the market in recent years. Competition from established games like Pokémon and Yu-Gi-Oh! hasn't gone away. In the face of all this competition, products like Double Feature do nothing to inspire confidence in Magic. I don't anticipate this necessarily leading to a mass exodus. But even a reduction in spending, and a subsequently flat sales year, could have negative consequences.

Do you think I'm overreacting? Is there such a thing as too much Magic? What do you think about Double Feature? About the direction of Magic in general? Let me know in the comments or on Twitter.