Netdecking is a common practice in both competitive and casual Magic alike. When there’s a deck that consistently performs well in a format, it’s natural that others try it.

Commander is no different. EDHREC is a fantastic website for discovering the most popular cards used for specific commanders. But with a tool like that at one’s disposal, I know that many Magic: the Gathering players ask the question, “What use is deckbuilding when the best cards are already determined?”

Allow me to tell you that even the most competitive lists have room to adjust. To salt and pepper to your own taste. That could mean adjusting the sideboard to match your local metagame. Or adjusting the ratios between copies of individual cards. But always feel free to take it further!

You could include surprises in the mainboard designed to tip the odds of your worst matchups. Or hate-cards against certain decks that you expect to see most often. The sky’s the limit! Once you get into it, deckbuilding is among the greatest delights Magic offers. The sheer number of possibilities is overwhelming.

Commander is a paradise for brewers.

Hello, Planeswalkers! Throughout my time on this site, I will share my love for deck building with you. This series will focus on fundamental and advanced principles of deck building applied to the Commander format. We’ll start small to get the snowball rolling and pick up speed as we approach more complex topics. My hope is that by the end you will see how much impact a foundation in deckbuilding can have on your enjoyment of the game.

In the following posts, we’ll begin to discuss winning decks of Magic’s history. From 1993 to present-day, and from Type 1 to Block Constructed. We will dissect each deck and adapt their strategies to our Commander brews.

This is true! You know a Commander deck contains 100 cards, some of which begin the game in the Command Zone. You are well aware that it contains a mix of lands and spells.

But for many players, this is as far as they go. Especially when taking a decklist off the internet. From theme decks to “good stuff” decks and even some tribal decks, Commander is a format dominated by piles of cards connected by a common theme. The deck might have a strategy, but if the player doesn’t know it they won’t be able to secure their victory.

We can do better. But if we want to win a marathon, we need to learn to run.

In my experience with the format every Commander deck falls into one (or a combination) of the following five archetypes:

Aggro decks win by sustained aggression. They are fast, persistent, and seek to end the game quickly. While they are often considered to be poor choices for commander games, they can be adapted with enough card draw and interaction to ensure their opponents cannot achieve their goals. In an aggro deck, you want repeating card draw, synergistic threats, cards to protect your board, and ways to secure the last few points of damage.

Midrange decks focus on protecting themselves in the early game as they accelerate their mana production. Often they focus on powerful creatures and efficient interaction. Midrange decks want lots of mana production, a good amount of card draw to ensure a steady stream of options and dangerous threats that will threaten to generate a lead. For example, a swarm of 4/4 Dragon tokens with flying could push you ahead of your opponents if left unchecked. In this sense, a threat is any card that you need to answer quickly or risk falling too far behind. Perhaps even losing the game!

Control decks focus on accruing small advantages over time, seeking to generate a lead above all their opponents. They protect themselves in the early game by reducing the options of their opponents. Board wipes, removal spells, counterspells, and card draw are all important, especially if you can use them more than once. A control deck wins when they have outlasted their opponents, exhausted them of resources, and can finish them off at their leisure. Because winning a war of attrition in multiplayer is hard, control decks often include elements of Combo strategies. This provides alternate ways to win the game as a backup plan.

Combo decks focus on assembling a specific engine or infinite combo that generates enough value to end the game on the spot. Combos that can go off at any moment. Piloting a combo deck takes as much skill as any of the other archetypes due to the necessity of surviving until you can cast it, and the difficulty of assembling two, three, or even more combo pieces from a deck of 99 cards. That’s without considering intervention by your opponents! To function well, a combo deck needs cards that search their library, ways to dig through their deck for tools they need, and brutal efficiency or a backup plan.

Value decks, also known as “Good Stuff,” sit in the middle of all four. Value focuses on having a pool of cards with individual synergies. Filled with an eclectic mix of aggro threats, midrange ramp, control board wipes, and combo win conditions, they have great flexibility. While they can work well in most pods, they can fold if the right pieces don’t come together. Don’t get me wrong, a Value-focused deck can be fantastic! But it’s important to keep more in mind than just your cards. You want to consider how you will use them, too.

Although each archetype is different, a deck can easily share traits of many. The archetypes a deck falls into can be determined by looking at the four pieces of its overall game plan:

Each of these components is unique to a given deck. When combined, the four components explain your strategy.

Here is an example from my own collection of budget decklists: 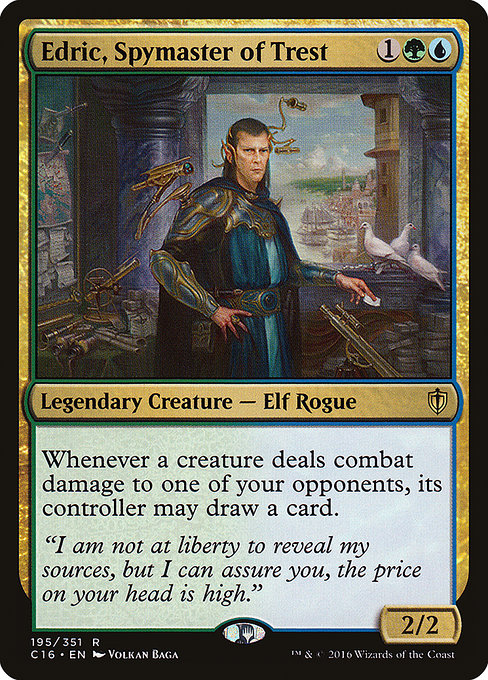 I designed my aggro-control Edric, Spymaster of Trest deck for playing at low-power tables.

Its strategy is to reduce my opponents’ life totals to zero through sustained aggression. A death from thousands of cuts backed up by a suite of counterspells to protect my board from removal. 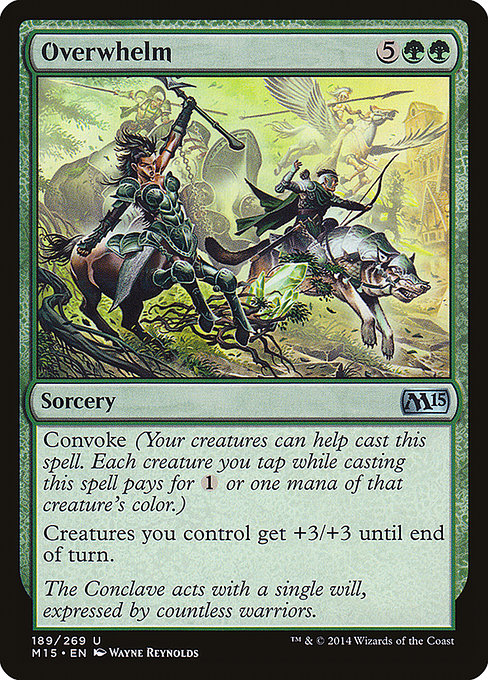 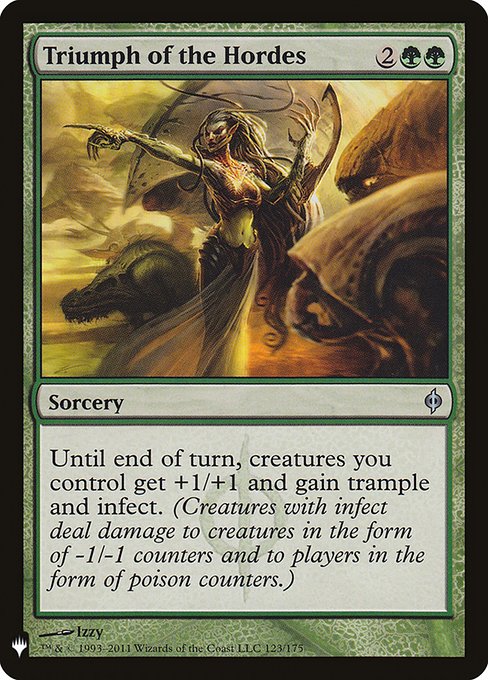 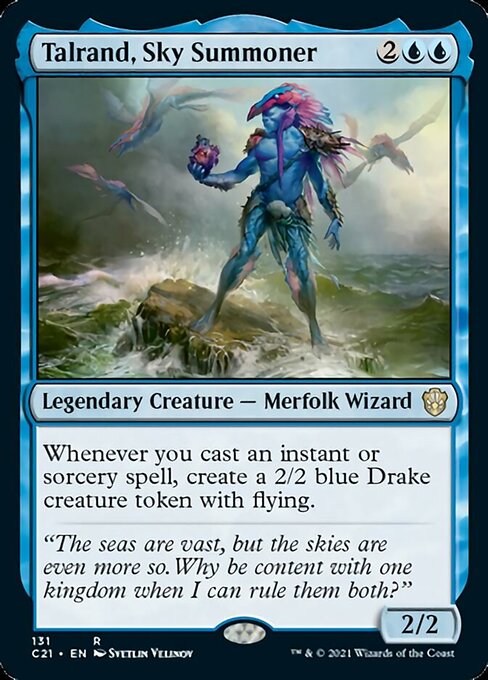 My primary win condition is to secure a victory by lowering my opponents’ life totals enough that I can cast a fatal Overwhelm or Triumph of the Hordes Edric’s draw triggers help me dig for them. Should things go south, I also have Talrand, Sky Summoner, and can fall back on my core strategy of controlling the board and attacking with flyers in case I can tell I’m in for a long game.

The Early Game for this deck starts on turn one and ends when one of my opponents casts a board wipe. The goal during these turns is to flood the board with small evasive creatures and attack with them. By the end of turn three, I want five creatures in play. On turn four, I want to play Edric and swing with my creatures for damage, drawing cards for each as his effect triggers. This fills my hand with more spells, allowing me to recover from any board wipes.

During the Mid Game, which lasts up until one of my opponents loses, my goal is to rebuild my board state and protect it with counterspells and interaction. I often hold back on resources, aiming to keep a full hand of seven cards at all times. If another board wipe does resolve, I need those cards to rebuild. Each turn I swing with my creatures the life totals of my opponents dip closer to zero. With Edric’s ability to incentivize attacks against my opponents this happens at a faster rate than you might expect.

During the Late Game, my goal is to wait for an opportunity to finish off my opponents. I do so with repeat pressure or by drawing one of my win conditions.

Thanks for sticking through to the end! It may be dull for some of you, but it’s the foundation of advanced deckbuilding. Soon enough we’ll get into interesting concepts such as “advantage to lead to win,” the four ways of thinking, building for your metagame, and designing under constraints.

To close this off, I would like to thank Quiet Speculation for the opportunity to share words of wisdom with you. Tune in next week when we flashback to 1996 where we talk about two things: Card Advantage and Keeper. A strategy famous as, “The Deck.”