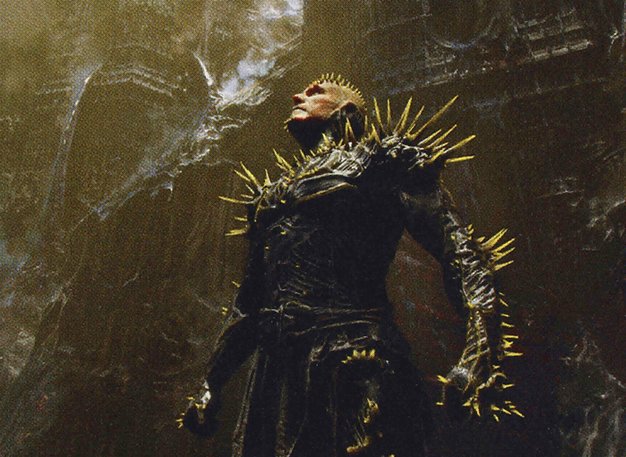 Mental Misstep. Gitaxian Probe. These cards were mistakes and, while a powerful mechanic, Phyrexian Mana was definitely not tuned properly. The question then, is, should you bring Phyrexian Mana into your Commander pool? Answer these questions:

Like going to one life? Enjoy risking the entire game on some sequencing ability with a healthy twist of RNG? Love Phyrexian mana? Well, have I got a commander for you!

My local venue is going to have a Two-Headed Giant (2HG) Commander event and I believe this will be the right time to try my K'rrik, Son of Yawgmoth deck.

A Blast From the Commander 2019 Past

K'rrik is definitely not a remotely fair card. He turns your life total quite directly into roughly 16 black mana. K'rrik asks a very direct question: Can you win the game with 16 plus mana on turn four? Yes, it's entirely possible. The trick is to go from possible to probable and I've slowly improved the deck to get much of the way there. I think you'll find my version of K'rrik a little different than most other versions. This is partly because of the Two-Headed Giant twist for this event. The other part is how all-in this version of the deck is compared to most others I have seen.

Best Cards in the Deck 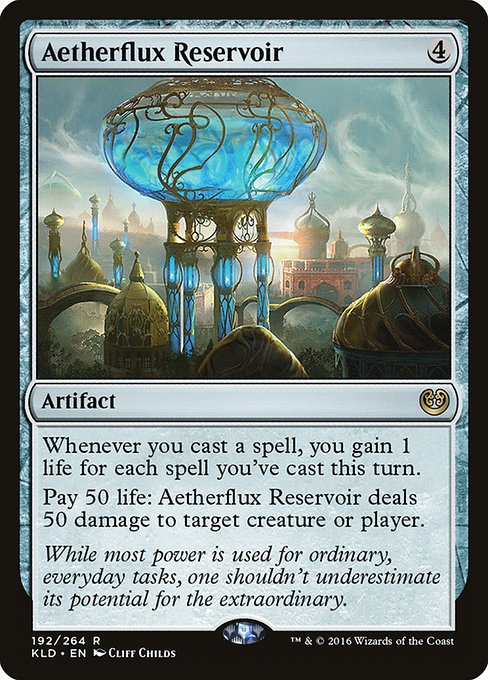 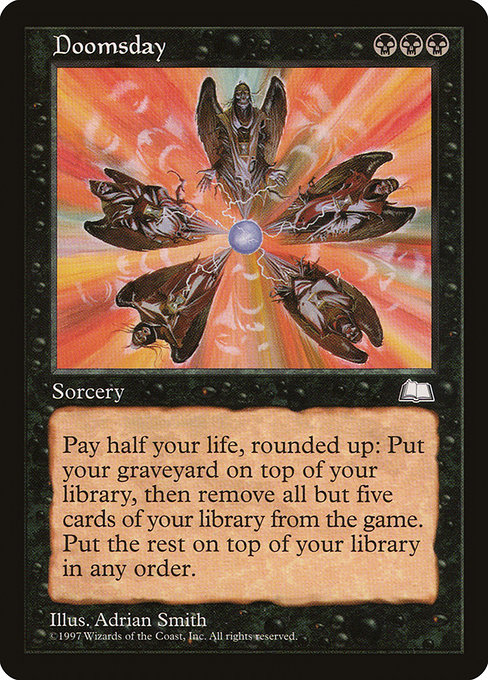 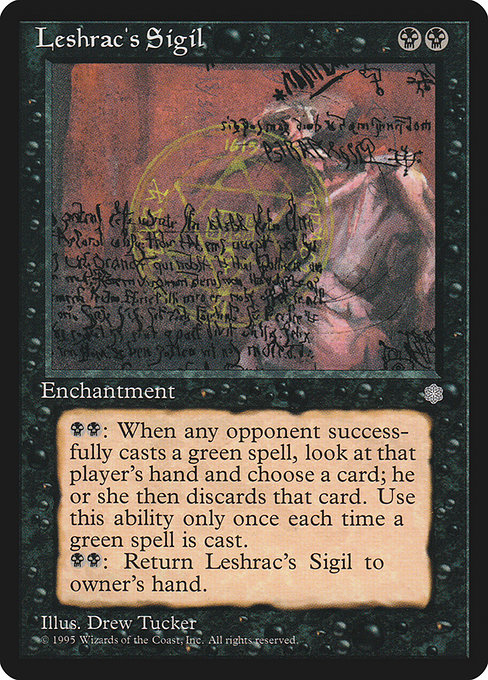 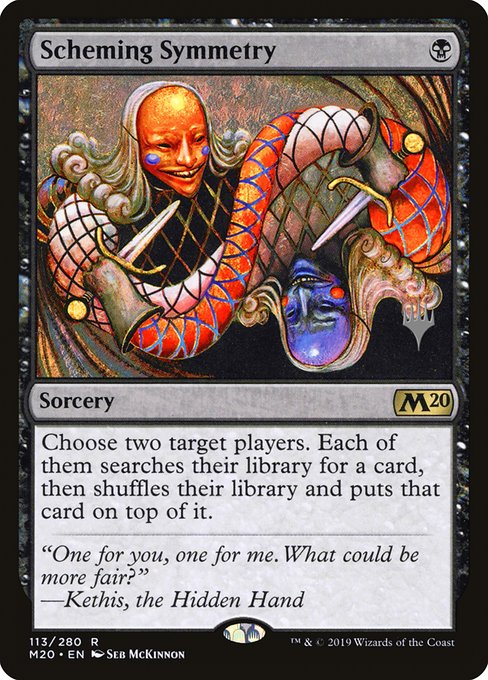 Part of the allure of K'rrik is having huge turns and figuring out how to win, on the spot, from any board state or mana count. The amount of plays possible is mindboggling if we don't have our go-to win: Doomsday.

I usually get Dark Ritual, Cabal Ritual, Aetherflux Reservoir, Leshrac's Sigil as four of the five with the last card being either some form of insurance like Conjurer's Bauble or a draw spell like Infernal Contract or Cruel Bargain. Once you Doomsday then draw, you mana ramp with your rituals, cast Aetherflux, and finally Leshrac's Sigil. Your "storm count" at this time is at least five and now you can activate Leshrac's Sigil to bounce it back to your hand and cast it - now you are gaining at least six life. With K'rrik in play, you can pay four life to recast the Sigil, gain life, pay life to bounce the sigil, re-cast it to gain life… Once you are gaining eight or more life you have effectively gone infinite. With infinite life, you can kill an arbitrary amount of opponents with Aetherflux. Casting infinite black spells also puts infinite +1/+1 tokens on K'rrik so you can attack someone for lethal commander damage. Sometimes it's important to do as much as you can first *and then* attack with K'rrik; his Lifelink can be just enough to power a win on that turn!

It's not Blackmail It's Extortion 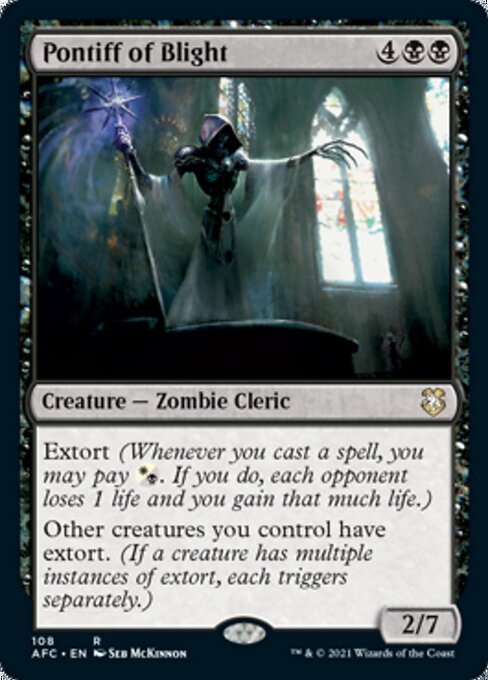 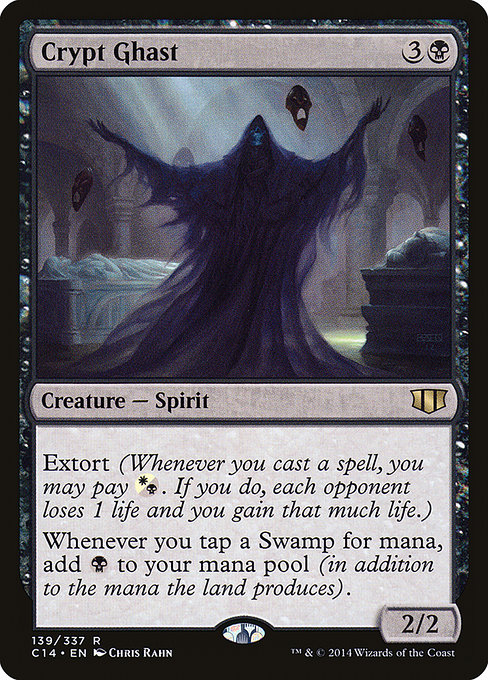 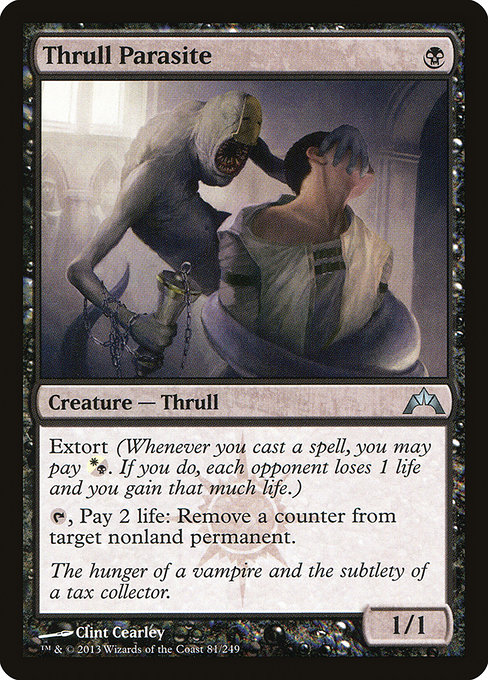 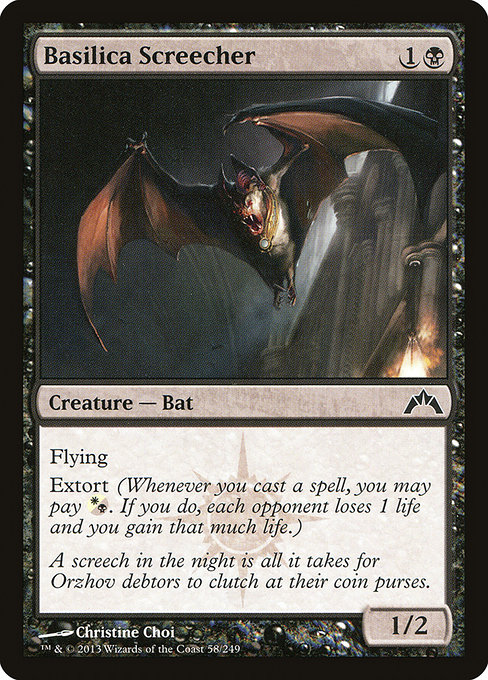 My version of this deck has some tech for Two-Headed Giant. If Doomsday is not possible, the deck has a surprisingly strong backup win condition: Extort creatures. The beauty of Extort with two or more opponents is that you can pay to Extort for two life with K'rrik - you get that life right back while your opponents get drained for free! Chaining off several spells per turn is very easy with the amount of draw in the deck. In a multiplayer game with three opponents, you actually net one extra life every time you Extort using K'rrik mana! You can also sometimes "Oops" into Relentless Dead or Gravecrawler, a sacrifice outlet, an Extort creature, and another Zombie to turn every black mana and life point into more drain damage. 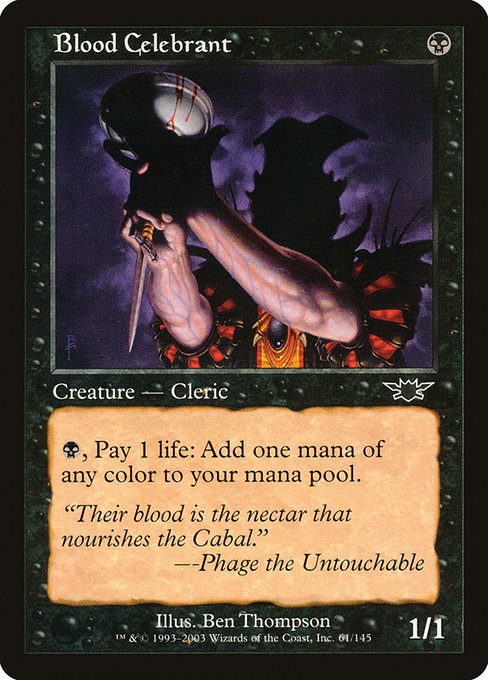 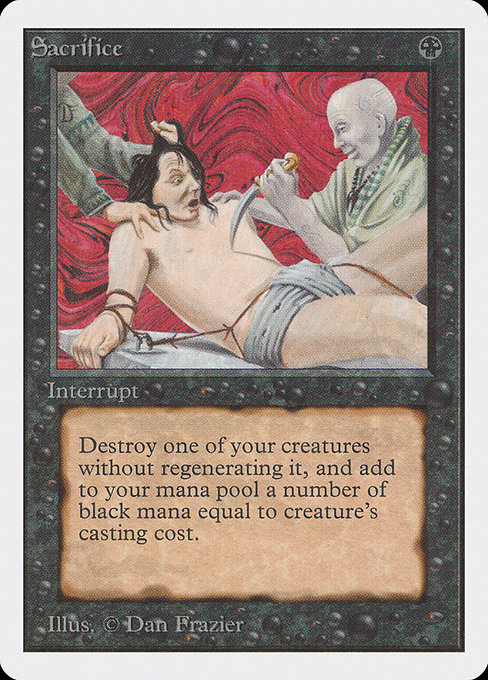 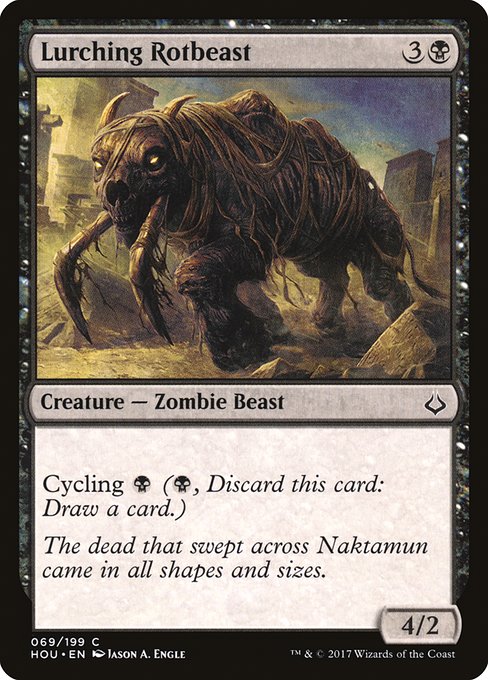 With K'rrik, Blood Celebrant allows you to pay three total life for one mana you can use for anything; this card is extremely good here! This bad Channel generates some mana or becomes an Extort body with a Pontiff of Blight in play.

It's not Much of a Sacrifice

I love playing cards that literally defined a mechanic in Magic. Sacrifice is exactly that. Much of the time it's another Dark Ritual or better. An interesting trick is to just Sacrifice K'rrik straight up. As long as this is the first time he has died, bringing him back costs six colorless and three black Phyrexian mana, aka six life. Sacrifice on K'rrik generates seven black mana - but with K'rrik out, it's only another two life - thus this generates one extra black mana and K'rrik for the price of K'rrik and 8 life - a bargain! Sometimes that extra "storm" count and single bonus black mana are exactly what you need. If you're not willing to potentially pay eight life for one mana K'rrik is not the kind of deck you will enjoy playing.

There's a story here, one I am happy to tell. During the "Magic Arena" beta I played a particularly grueling game versus a Dimir control deck and it came down to me with Lurching Rotbeast (I just started playing and had a limited collection) versus my opponent who finally was out of resources. On that day that I made a bold promise, "Lurching Rotbeast," I said "If you win me this game, I will forever include you in every black deck I ever play." With the oath made, Lurching Rotbeast smashed in turn after turn bringing my opponent to near death. Just one more combat step would immortalize the Rotbeast but it was not meant to be. My zombie was brought down by removal.

While I did eventually grind out that win, I never forgot about the Rotbeast that almost was. Additionally, K'rrik allows you to pay for Cycling costs that contain black mana by just paying life thus I have a huge number of cards that turn into Street Wraith. If Streetwraith is Modern and Legacy playable, then Lurching Rotbeast under the command of K'rrik becomes just as powerful. It is also a zombie for Gravecrawler shenanigans. 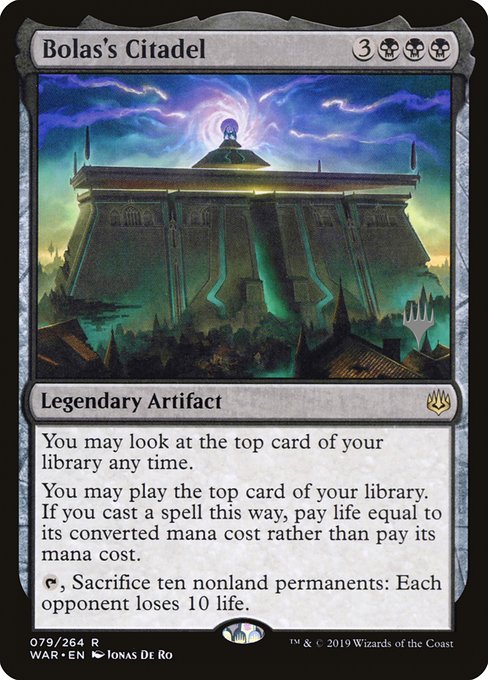 Is it possible to win with this deck on turn one? The answer is yes! Here's what you need:

Get mana, cast K'rrik, cast Bolas' Citadel, cast Doomsday, Citadel the cards into play to win. Is this a reliable turn one win? No, definitely not. However, it is important to familiarize yourself with the sequence of cards because you can win from surprising angles and many different board states. Simply casting Peer into the Abyss at virtually any time results in a pile that wins 99.99% of the time (I've clearly done the math, trust me!)

Aren't You Afraid of Big Blue?

Never live in fear of Counterspell. Force your opponents to have the answer or lose, right now. Additionally, if you're absolutely sure the table is packing counterspells switch gears to the Extort plan and just drain the table slowly; no one will think you are the primary threat if you slow down. Furthermore, this version of K'rrik is one I am going to bring to a Two-Headed Giant Commander event - I'm going to have a teammate with counterspells!

A Combo Deck But So Much More

K'rrik does not begin and end at Aetherflux+Sigil or Gravecrawler, Phrexian Altar, and Ayara, First of Locthwain. It's about thinking on your feet, seeing the correct line, and knowing when to go all in. Unfortunately, no plan survives first contact with the enemy. That's why the deck has an Extort backup plan.

Why Are You NOT Playing X Card?

The most likely reason is that I'm trying this deck out for 2HG and I know the venue fairly well. While there will be competitive decks, I do think that I stand a fair chance with my partner deck stalling the opponents and/or protecting my combo. I am strongly confident that even without an ideal hand, K'rrik can "go off" without very much warning and I do not want my opponents to see what is coming. Convincing my opponents that I am about to combo off and that they need to keep mana open for counters and removal every turn while I just play a bunch of creatures with Extort and one mana artifacts feels like a sneaky way to throw them off. The second they tap out I can go for the win.

Additionally, many cards are just too slow for what I am doing - this is why Basic Swamp is the only land in the deck (alright I run 1Barren Moor because it cycles for two life) - I cannot afford an enters play tapped land or something that is not doubled by Bubbling Muck and Rain of Filth. Another card I really want to play is Triskaidekaphobia but I cannot make room for it.

Adapting This Deck for Multiplayer

If I were retooling K'rrik for a regular multiplayer experience I would add a little more disruption, a few more permanents, and a bit more recursion at the cost of speed. For example, Ashnod's Altar and Phyrexian Altar are close enough to the same card to where I do not care which card I get. I run two to improve the chances of drawing one. In a multiplayer version, I'd probably cut Ashnod's to free room for other cards. It's unlikely I would run both Cruel Bargain and Infernal Contract for multiplayer; I might add in Temporal Extortion, one of my favorites, instead.

Additionally, there are cards like Scheming Symmetry that are an absolute slam dunk for Two-Headed Giant. They would turn into a variety of other tutors outside of 2HG. Another card I should be playing is Font of Agonies because of the incredible synergy but it is not part of my combo kill or my backup plan.

What Does EDHREC Say?

K'rrik has gotten really popular lately on EDHREC and has more decklists than any other mono-black commander.

The top combo listed for the deck is the classic Sanguine Bond+Exquisite Blood. This is a solid combo and is definitely a game-ender, but, I feel like it's really slow at ten total mana and telegraphs what is going on, and, either piece can be removed to stop it. My biggest gripe with this combo is that it barely utilizes your commander - these are five mana enchantments with only one or two black mana in the casting cost!

With K'rrik, I'm either playing 15 cards in a turn, ending the game, or just playing a mana rock and passing. It's an extremely unpredictable deck, and, it has multiple different ways to win that have nothing to do with one another; a single Basilica Screecher can get there and that does not fold to a single Disenchant.

I've wanted to play my version of K'rrik ever since I saw the card and now is my chance. I know for a fact that players are going to reach across the table and look at Fade from Memory or Dredge or Lurching Rotbeastand they are going to let their guard down. I'm going to smile; then I'm probably going to combo off.