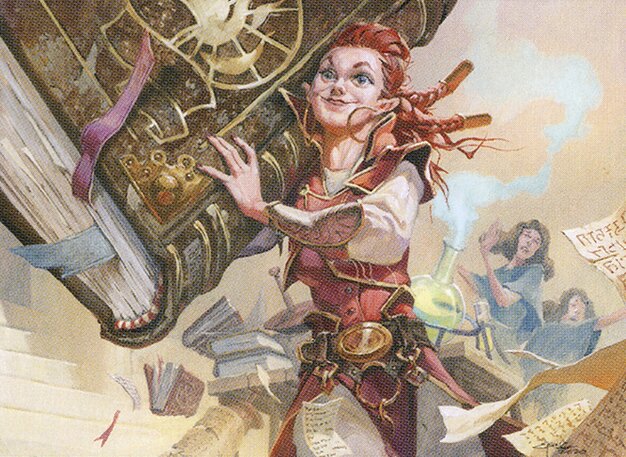 Richard Feynman was a Nobel-prize-winning physicist. He was recruited to work on the Manhattan Project (the team of scientists developing the first atomic bombs) while still in his early 20s. His groundbreaking work in theoretical physics included advances in quantum mechanics, particle physics, and quantum electrodynamics. It was in the field of quantum electrodynamics for which he was jointly awarded his Nobel prize. While best known for his scientific work, Feynman also pioneered an approach to learning and teaching: The Feynman Technique. What does all this have to do with Magic: The Gathering?

With the holidays upon us, many will be spending time with family and friends. Perhaps you have a child, a niece, or a sibling who will ask, "What's the deal with this Magic game you're always playing?" or "How do you play?" More likely, you'll have arm-twisted a friend or relative into learning Magic. However it happens, at some point, you will sit down and teach someone to play Magic: The Gathering. The Feynman Technique is here to make that process as straightforward as possible.

What is The Feynman Technique?

The Feynman Technique is a style of learning that can be applied to any concept. Its goal is more than just learning surface knowledge of a subject, but of helping the student achieve a deep understanding. While primarily used for learning, it can also be used for teaching. The Feynman Technique can be broken down into a series of steps:

Teaching Magic With the Feynman Technique

To start teaching anyone Magic, it is helpful to have done some advanced preparation. Before we even discuss the decks we will use, it is important for us to establish a basic understanding of the game, and how it is played. To use the Feynman Technique, start by writing down everything you know about Magic needed to explain a simple game to someone. This can include everything from the steps and phases of a turn, to what it means to "tap" something, to the costs to play spells. Whatever you think is important to play the game, write it down.

Once it's written down, you'll want to organize the material. The sheet you've written will serve as a reference guide while you are teaching. Keep it simple, keep it neat. Try to limit it to one 8.5"x11" piece of paper. Once it's written down, read it to a friend who already knows Magic. Is there anything missing? Did you adequately lay out the steps of a turn? What about priority? The stack? Fill in as many of the gaps as you can, and repeat this process until you have a one-page written guide to playing Magic that anyone could pick up, read, and muddle through a game with a minimal amount of guidance by you.

With your teaching guide in hand, you are ready to start teaching using the Feynman Technique. I recommend explaining as little as possible at the start. Cover costs of spells, tapping, and outline the steps of a turn. However much you need to get the new player into running a sample game with exposed hands. Follow steps three through five of the learning principles we've discussed, taking the new player through each step of a turn, and through several turns of a game with hands exposed until they feel comfortable navigating the turn sequence.

As you go, your friend or family member may have questions about how things work. Utilizing either your own knowledge, your cheat sheet, or another source, answer each of these questions as they come up. Answering these questions will fill in gaps in the knowledge of the learner (step four), and may reveal additional content to add to your cheat sheet. Continue this process through a few sample games (with hands revealed or hidden) until the new player feels comfortable playing with a minimal amount of questions. At that point, you'll have successfully taught them Magic! So what decks should you use to aid in the learning process?

What Decks Should You Use?

While it's possible to teach someone with full Commander decks or tournament-caliber Modern decks, custom teaching decks or a purpose-built product like Magic sample decks or JumpStart packs is recommended. The advantage of preexisting sample decks or JumpStart packs, if you have either, is that they are ready-to-go products that require no prior planning other than your teaching materials. Simply shuffle them up and start teaching. If you do not have access to those products or prefer to build custom teaching decks, there are a number of factors to consider when deckbuilding.

Additionally, each deck should not contain more than one rare/mythic, or more than four or five uncommons. This limitation is intentional. By building decks mostly around common cards, the cards will be less technically complex, and more likely to include reminder text on keywords. This will aid in the teaching process before introducing players to more complex cards, and make the rares that appear in these decks that much more exciting.

The Feynman Technique is only one of the many possible methods to aid your teaching of Magic. What teaching strategies have worked for you in the past? How did you learn to play the game? Let me know in the comments, or on Twitter. For more on the life and work of Richard Feynman, check out his autobiography "Surely You're Joking, Mr. Feynman!": Adventures of a Curious Character.