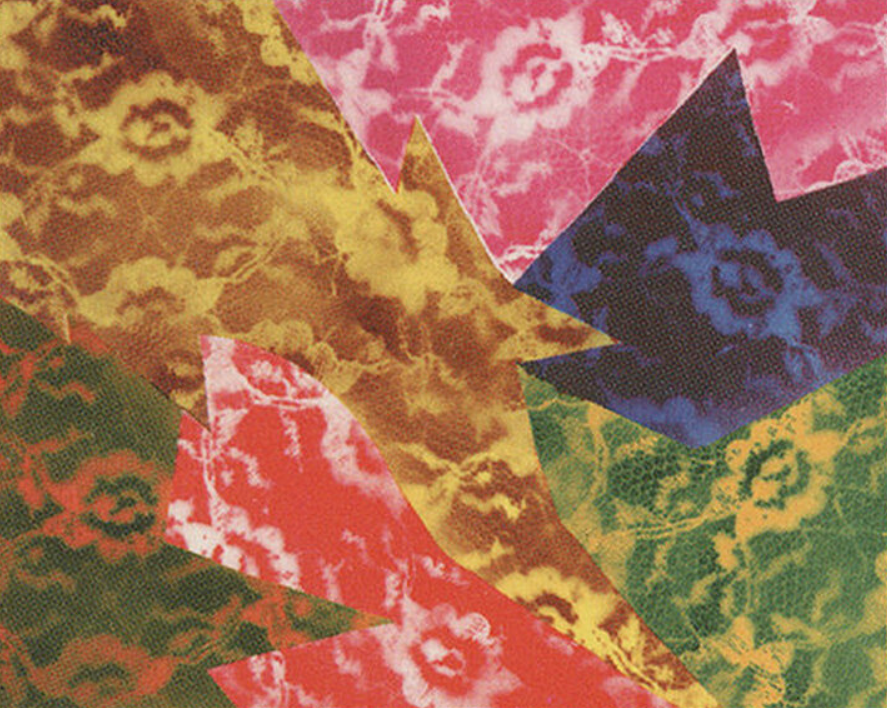 A couple months ago, Star City Games had somewhere between fifty and sixty different Beta rares in stock. As of this article’s writing on January 29th, 2022, that number has dropped to 44. I suspect in a couple more months, the quantity they have in stock will be even lower (unless they increase their buy and sell prices, of course).

What’s more, they used to have some of the least desirable Beta rares in heavily played condition priced at $59.99. Those are long gone (I purchased a couple myself), and now their cheapest Beta rares are played Thoughtlace, Purelace, and Chaoslace for $89.99. But are those the cheapest Beta rares one can find, or are there locations where they may be acquired for less?

How about Arabian Nights cards? Or Alpha? Forget about rares—what are the cheapest cards from these two sets that one can acquire?

For those who aren’t picky about condition, this week I’ll share my approach to finding the least expensive cards from Magic’s oldest and most valuable sets. If you want a piece of history without sinking $100’s, read on!

The Cheapest Beta Rare Is…

The answer is in fact a member of the “Lace” cycle. Looking at TCGplayer, I’ve found the following prices for the cheapest copy of each lace with associated condition, for reference:

It's looking like the answer may be either Purelace or Chaoslace. But there are a couple more places I want to check first, just to make sure I find the absolute cheapest, lowest price copy I can.

ABUGames turns up empty. They’re one of my favorite shops to trade to, but lately, their Alpha and Beta inventory has been pretty anemic—especially on the rare front. Channel Fireball’s marketplace is also lacking on some of the older, harder-to-find cards.

This brings me to Card Kingdom. I filtered their Beta inventory down to only the rares, sorted by price low to high, and this is what I see: 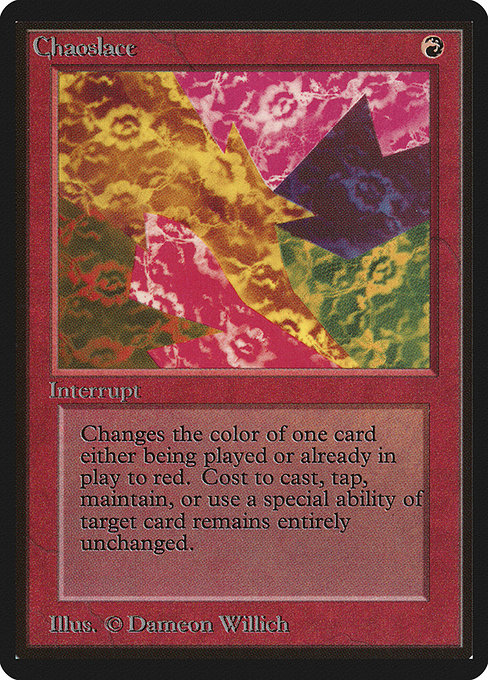 Considering you can usually obtain Card Kingdom store credit at a small discount to cash, this is actually a pretty solid deal. If you want a piece of Magic history—one of the approximately 3,200 copies of a Beta rare—then picking up a played Beta Chaoslace from Card Kingdom is the way to go. I’m tempted to grab one myself, and may consider it if they still have any in stock when I next obtain some store credit there.

Let’s face it, the card may be largely unplayable, but it’s a pretty safe bet to say that a few years from now, the cheapest Beta rare will be worth a good bit more. Finding sub-$100 Beta rares will one day be a thing of the past.

Speaking of Things of the Past…

Let’s say you didn’t want to bother with Beta. Instead, you want a piece of Magic’s very first set every printed: Limited Edition Alpha. How much will you have to pay up to obtain such a card?

Well, for a moment let’s ignore rarity. Alpha rares are awfully sparse, making it difficult to find and compare prices. It’s safe to say that it’s very difficult to find Alpha rares for under $400 anymore—maybe a heavily played Lace can be tracked down, but it is ultimately dependent on what’s for sale on the open market at any given moment.

Well I started with Card Kingdom, since that was where I found the cheapest Beta rare. Sorting by price, I see that Sea Serpent shows as the least expensive. However, Card Kingdom is completely out of stock of the card, so that doesn’t really count. It turns out Card Kingdom is out of stock of dozens of low-end Alpha cards! I haven’t seen their Alpha inventory this thin in quite some time. I’m not sure if that means they’ve been selling through their Alpha cards lately, or if they’re in the process of repricing everything.

In any event, the cheapest Alpha card I found on their site was a Good (likely HP) Ironclaw Orcs for $32. I’m pretty sure we can do better than that! 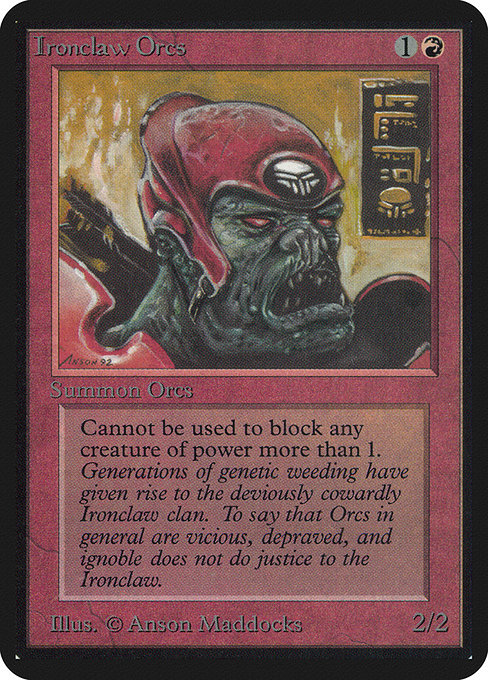 ABUGames once again under-delivers—they only have a handful of Alpha cards in stock, and their cheapest is a heavily played Paralyze for $40.25. Star City Games has a few heavily played Alpha Plains in stock for $30, but the cheapest Alpha common they have in stock starts at $34.99. That certainly won’t qualify as the cheapest available, though it’s worth noting these cards are in “PL” condition, meaning they’ll be between LP and MP. 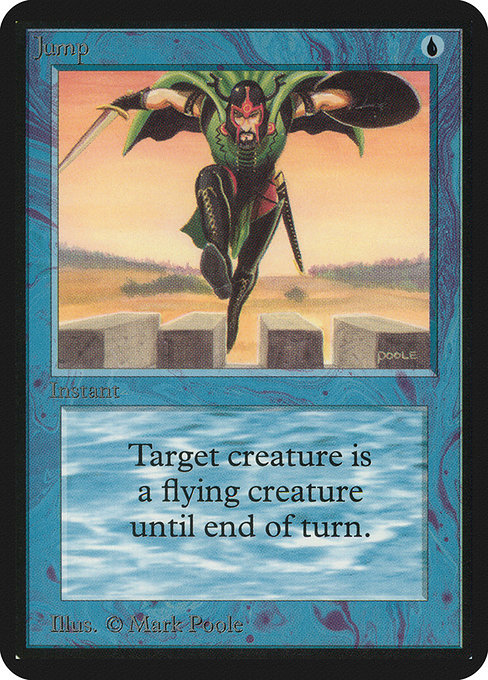 Less than a decade ago, you could find Near Mint Alpha commons like these for a buck. Now the cheapest, most played copies surpass $20. Owning a piece of Magic’s very first set isn’t cheap, and I suspect it’ll get even more expensive throughout the 2020s. As long as Magic remains a robust, popular game and collectors dedicate resources to the hobby, these will continue to appreciate. If you’d like to have an Alpha card in your collection, TCGplayer is the way to go—just make sure you shop from a seller with a high feedback rating to avoid potential issues with clipped Beta.

Let’s say you’re less interested in Magic’s first core sets, Alpha and Beta, and would instead prefer some of the more interesting and colorful cards from Magic’s first expansion set, Arabian Nights. What are some inexpensive cards to look at if you wish to add these to your collection, and what stores should you buy from?

I again browsed TCGplayer, Star City Games, Card Kingdom, ABUGames, and a smattering of other locations. ABUGames's prices all start much higher than the rest of the market—I’d rather be selling Arabian Nights cards to ABUGames than buying at their current prices. Card Kingdom has significantly more Arabian Nights inventory than Alpha. But their Arabian Nights prices don’t start very low—their cheapest card is a very good Moorish Cavalry for $3.84 (at least an interesting card with artwork very representative of Arabian Nights). 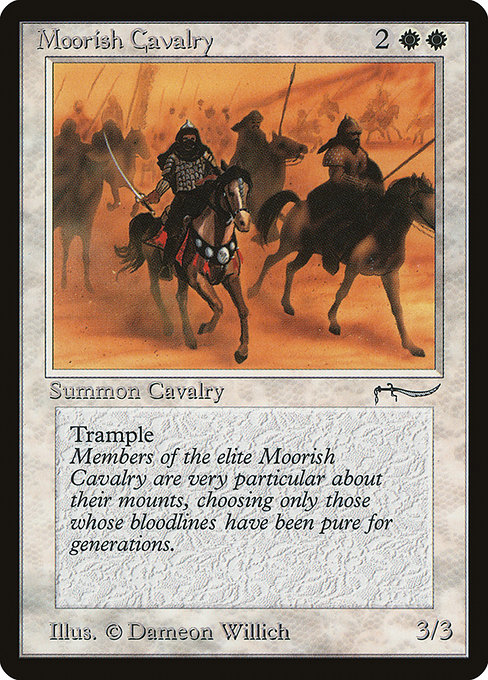 Star City Games has exactly one card that’s cheaper than Card Kingdom’s cheapest Arabian Nights card: a heavily played Nafs Asp for $2.99. Is that the best we can do?

Once again, the cheapest copies available can be found on TCGplayer, where Arabian Nights cards can be found for under $2.

Granted, the sub-$2 Arabian Nights cards are graded “damaged” and also carry a shipping cost, so if you want to pick one up on the cheap your best bet is to find other cards to add to the cart to save on shipping. If you only want to purchase a single Arabian Nights card for as cheaply as possible, you’ll likely have to pay around $3 for someone to throw one in a plain white envelope, smack on a stamp, and drop it in the mail.

It still beats paying $3+ for tracked shipping from Star City Games or Card Kingdom. Unlike with the Beta rares and Alpha commons, Arabian Nights cards are so cheap that things like shipping costs need to be taken into consideration. I’m not going to sit here and make a recklessly bold prediction about the cheapest Arabian Nights cards a few years from now. Instead, I’ll just say that there are plenty of inexpensive options if you’re looking to pick one or two up for your collection. Given there are over 100 listings of most of these low-end cards, that’s likely to be the case for some time yet.

You could expand this exercise to Unlimited, Antiquities, Legends, and The Dark cards as well. But the reality is, the print runs on those sets are sufficiently large that copies of cheap cards from these sets are still plentiful. Sometimes when I’m making a purchase on TCGplayer, I like to browse commons from these sets to see if there are any fun, cheap cards to add to my collection for cheap.

I actually did this just last weekend. I wanted to pick up a cheap Antiquities Colossus of Sardia and I found a heavily played copy that seemed fairly priced. So after adding it to my cart, I browsed the store’s other inventory and found a smattering of other fun oldies to pick up.

None of these cards are going to make me money—it’s not about that. This kind of purchase is just a fun way to enjoy some of Magic’s earliest sets in a budget-friendly way. I may be able to flip a couple of these cards to Card Kingdom’s buylist for a minuscule profit next time I send them an order. Until then, I’ll enjoy the aesthetic of these old cards.

I’m glad we can still experience and collect these nearly thirty-year-old cards for such a low cost. Hopefully, that doesn’t change, so that new players can continue to see where Magic got its beginnings back in 1993. The game looks very different now versus then, and I think owning a piece of this history is something to be cherished.