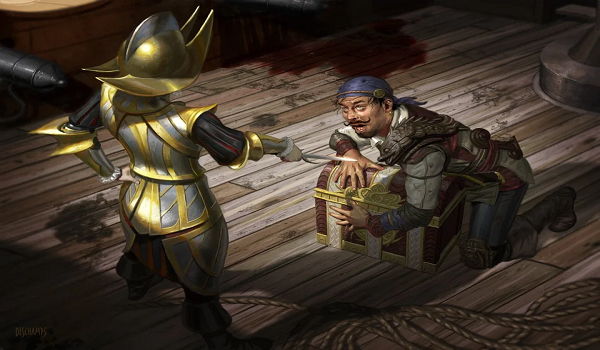 We were all new to Magic once. When I started playing in Revised this is what Frozen Shade looked like. 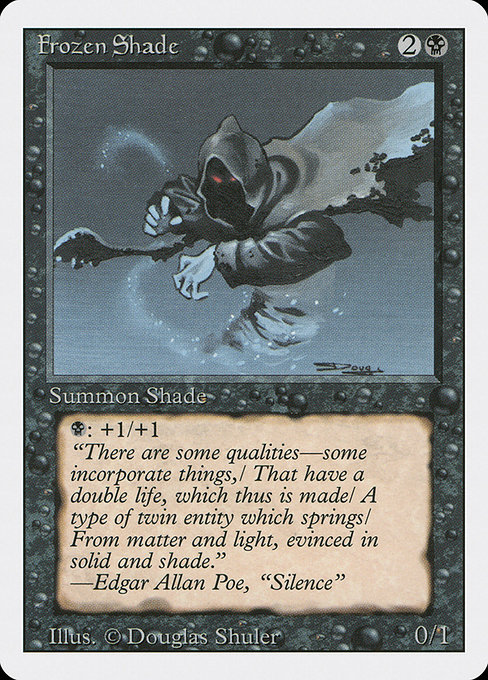 The internet was still a new thing and there was no huge Magic community like exists now. At best we had our small rulebooks that came with each starter deck. To us, this card said, "pay one black mana: this creature gets +1/+1.....forever." A lot of our games ended up in absolutely huge board stalls with eight or nine creatures per side at least, multiple Shades pumping up turn after turn until eventually one of us would all in and swing-out only to be met with Fog. Repeat that two or three times until eventually one of us would be dead. It was fun times but we did not know what we were doing.

It's Different Now...Except It's Not

At Streets pre-release, I was carefully going over my not-so-great but not too terrible pulls. Then I carefully read and re-read a particular card many times and I was stumped. It was clear that it couldn't work like the words printed on the card indicated but I had to ask a judge anyways. While the judge was correct on this card the five other players I asked were equally confused; I received four different interpretations of the card from them. 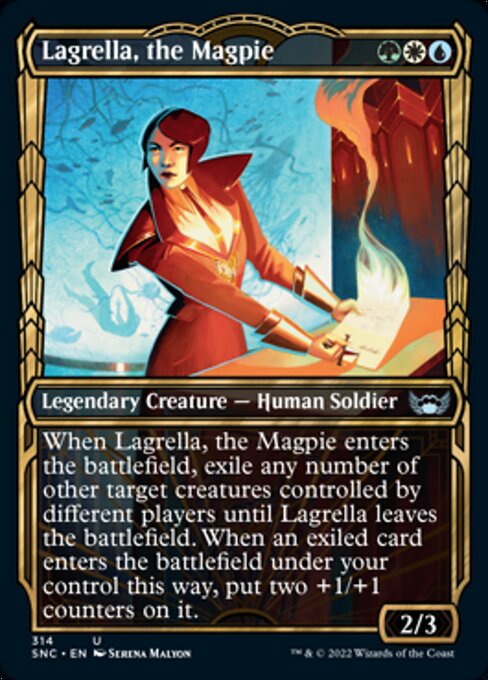 Lagrella, the Magpie has a strange reference to "any number" and also "different players." Couldn't they just write "up to one other creature per player"? It's fewer total characters and is absolutely clear. Wizards why print "any number" when "up to one" solves this? Why make a totally brand new interpretation of a somewhat common templated ability when you have hundreds of other cards in the game that say "up to one"? A cursory search shows THREE instances of the "different players" template and 233 instances of the "up to one" template.

At Least The Internet Agrees With Me

Fortunately, I only had to play Lagrella in one of my games and it was decent there. Over the next week I read several articles regarding Streets and wouldn't you know it many people including judges kept mentioning Lagrella as the most confusing and poorly written card in the set. I felt vindicated. Me, a player since 94', should not have any issues with understanding how a card works. I'm beyond such things, right? Well, no. See even though I've been playing for a very long time, I have been playing with the Streets cards for exactly the same amount of time as everyone else. While I am not new, New Capenna certainly is.

And Then There Was SpellTable

After many, many, MANY hours on SpellTable I've run into things that I have never seen before in paper. Because of the nature of SpellTable, I am interacting with many more players of wider experience levels than ever before. Some of the conundrums are caused by playing remotely and just not seeing all the cards in play as easily, but occasionally there has been a new situation that neither I nor any of the other players have encountered. I've encountered an equal number of situations that I was familiar with, but that the other players were not. Explaining these rules interactions often requires tact and patience. For example, our table ran into this card and the game froze: 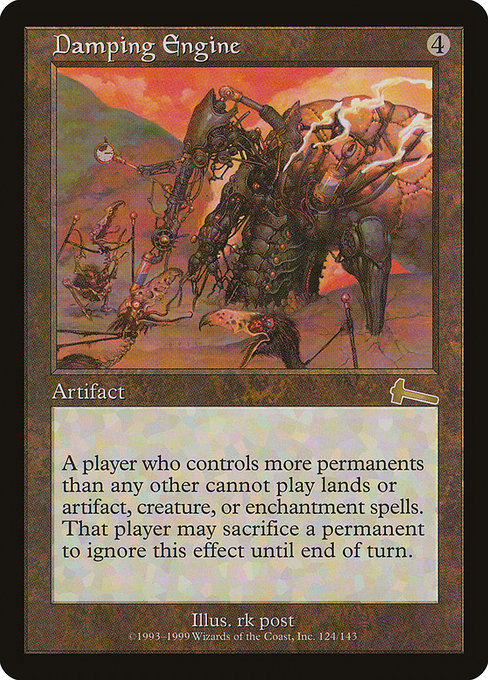 The entire table looked at this old Urza's Legacy card and thought they had it down..until they didn't. Every turn players kept counting and re-counting and re-reading Damping Engine. The game itself ground to a halt. Finally, I narrated what was going on to make it easier for the table. "I have the most permanents at 11, so, if you have 11 or less this does nothing. If you get to 12 this THEN stops you from doing things unless you sacrifice something." Play continued much more rapidly from that point. Someone keeping track of the highest total permanents allowed the table to play the game effectively. 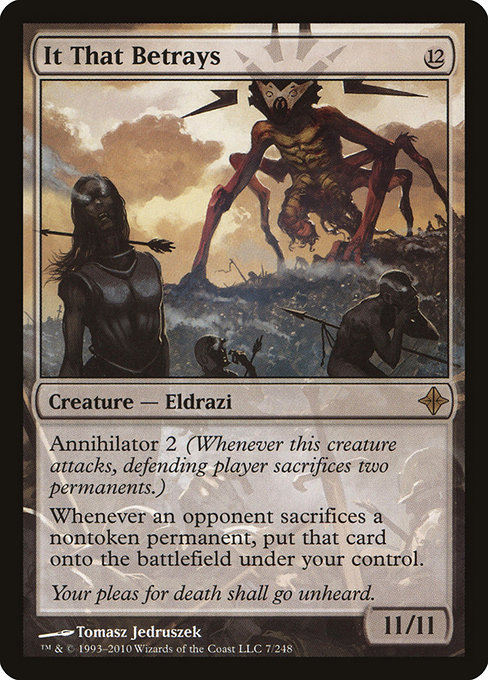 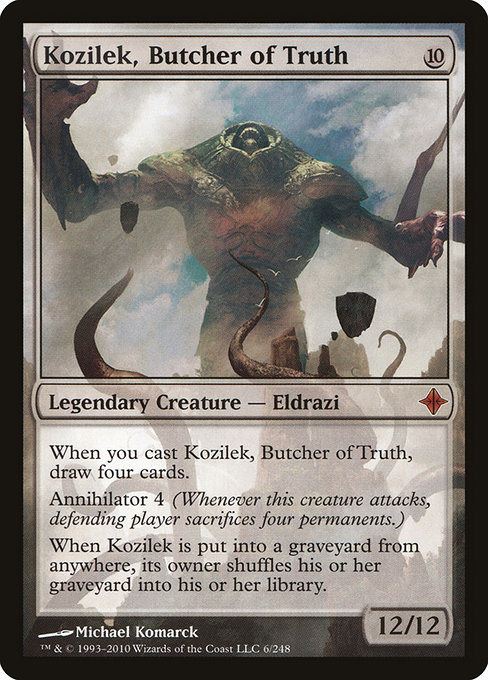 The board had just gotten reset by a bounce effect and the current player took the opportunity to play Sneak Attack and throw two gigantic Eldrazi monsters into play slapping your's truly for 22 damage and sacing six permanents. As I had nothing but land, I had to sac lands. This put me extremely far behind, however, I was already in last place (in my opinion) anyways. So I did what any diplomatic last place player would do in this instance; I fed the player who was already ahead and put them extremely ahead. In two turns I gave them 20 Treasure. This caused the It That Betrays player to leave the game. Of course, they left the game with six lands that were mine. What happens to my lands?

Well, I knew. I've written a little bit about these types of situations in articles here, here, and here, but I have not gone in-depth and examined every possible situation because I'm just trying to play Commander; the rules guy is over here. Effectively, delayed trigger duration control effects expire when someone leaves the game so control returns to the owner at that point. But effects that give control without having a duration do not expire and those permanents are exiled instead. In this case, I'm just down those six lands. The other two players, however, were not completely sure about the situation and part of their uncertainty was their knowledge that *some* things do go back to the original owner's control but *some* things do not. As Magic continues to add new cards these situations become more the norm. It's up to all the players at the table to try and help everyone with complexity. In particular, if you are playing a deck that has a lot of theft mechanics, it's really on you as a player to know the rules for what you are bringing to the table.

Will Look At The Entire Turn 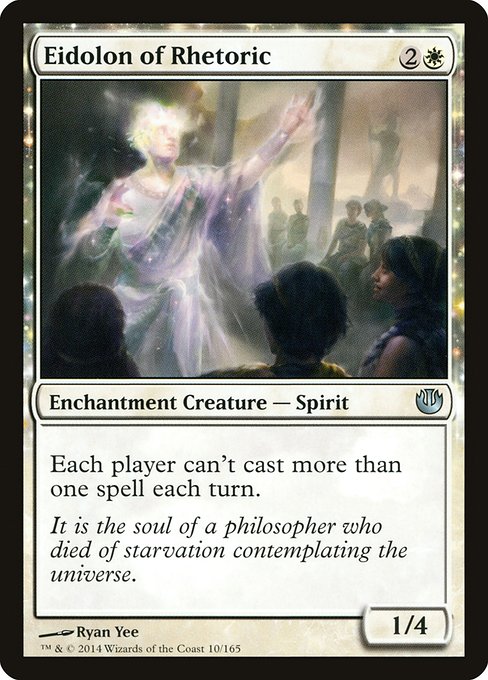 We were down to three players at a table and one of them cast Eidolon of Rhetoric. The next turn, a player killed it and then wanted to cast a second spell. The Eidolon player told them "You can't cast a second spell this turn because Eidolon sees the entire turn." While I have written about unique effects like Titania's Song that persist for a turn even if removed, the Eidolon has no such clause. However, when reading the Gatherer entry, one could argue that Eidolon still works even if it's removed because it says "even if Eidolon wasn't on the battlefield." Of course, that's not what they mean. The entry says "specifically" and then tells you what it means i.e. that the Eidolon sees the turn before IT enters the battlefield and stops you from casting more spells. Both I and the other player had to calmly but firmly argue with the Eidolon player that Eidolon does nothing from the graveyard. Eventually, they relented but it was obvious they did not agree. The problem here was that the player knew the card had special rules that were in effect even while Eidolon was not on the battlefield but they did not know the exact parameters.

This Is NOT A Rules Article

While I felt it was essential to go over specific instances of rules-y things that I have encountered in the last month of play, hopefully, you see the player side of the equation. Magic, particularly Commander, has thousands of cards from nearly 30 years of sets potentially interacting in ways no one at the table has ever seen...each game. There will be rules disputes. How you handle the situation is important for peace of mind, ease of play, and fun. Make sure to check Gatherer as a first stop when you're not sure because it's fairly often that the first ruling is a clarification on something that commonly comes up.

Next, be flexible with your viewpoint and be patient. Not only can it be a simple issue of not reading a particular word or line it could also be a misinterpretation based on another factor like having trouble picking a card up in SpellTable or forgetting some other interaction is happening on the table. Most of the time players agree on what is going on at the table but there was a detail that needed to be clarified and it was missed by one or more other players. After clarification, all tends to be well.

What Happens If You Can't Reach An Agreement?

This is a classic case of how to disagree without being disagreeable. If you're absolutely certain of the ruling cite your source and suggest the other players check up on that. If you're not absolutely sure have the other players cite their sources so you can check for yourself. If there's no chance of getting outside assistance from a judge, friend, or a Discord server and you're still not sure, try to reach an agreement with the table and move on. If all else fails reference the original rulebook: "During the course of a game, a dispute that you cannot solve by referencing the rules may occur. If both players agree, you can resolve the difference for the current game with a coin toss. After the duel, you can come to a decision about how you want to play such a situation in the future. If the players don't agree to a coin toss, both players retrieve their ante and the duel is a draw."

So toss a coin and don't forget to retrieve your ante! Is this foreshadowing for a future article? Maybe definitely.