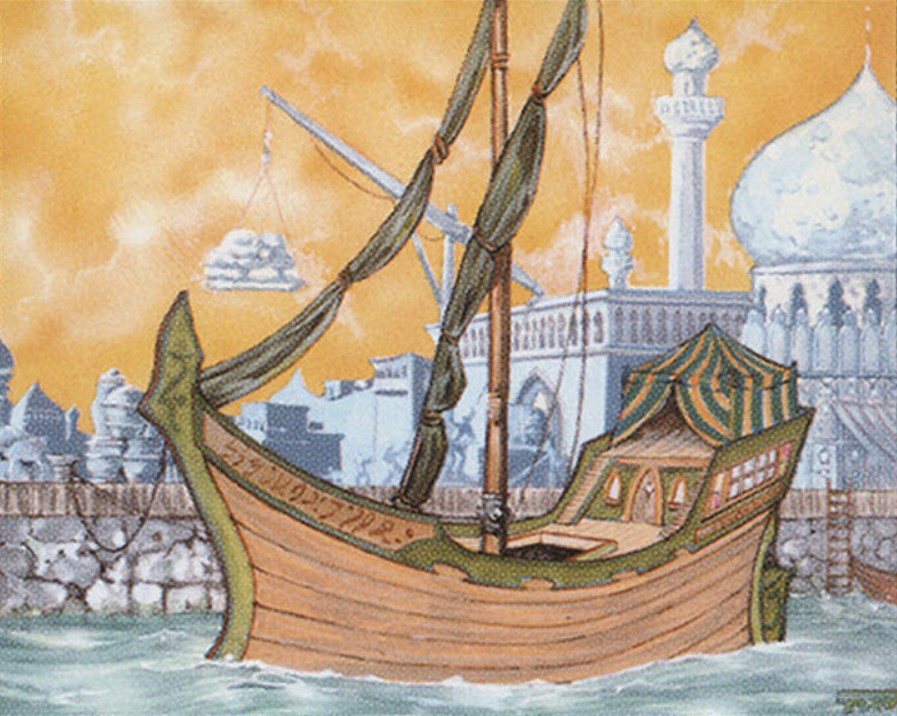 Last week I left a valuable easter egg in my article by sharing a sub-$800 copy of Library of Alexandria I found for sale. The card sold shortly after my article went live. I can’t say I’m surprised. That card had no business being that cheap, especially from a trustworthy seller. Perhaps some players—particularly Old School players who may not frequent large-scale events—are not familiar with Face to Face Games. It’s also a Canadian shop, so I could see how many players would forget about the game shop in the Great White North.

Here's the thing, though: you’re going to want to know about these international shops. As the Federal Reserve wrestles with inflation, they’ve taken an aggressive approach of raising interest rates. This, in turn, strengthens the US dollar—we’re talking 20-year highs here. Other central banks aren’t moving as quickly as the US, and (without getting into too much macroeconomic theory) the result is that the U.S. Dollar is strengthening relative to other currencies.

The result: arbitrage opportunity. It’s back with a vengeance, and if you’re interested in taking advantage of deals from other countries, you’ll definitely want to familiarize yourself with some key stores.

I already touched upon this one in my introduction, so I thought I’d start here. The US dollar currently purchases around $1.30 worth of Canadian dollars. In this particular case, the conversion rate has hovered in a somewhat narrow range between $1.20 and $1.40 for about 6 years, so this isn’t a recent phenomenon.

What’s important, though, is that you are familiar with the game store and are ready to take advantage of any sudden shifts in the currency market. As the Fed raises rates throughout 2022, I anticipate this will send this line graph higher. If the $1.40 line is crossed, it could mean a return to the highs back in 2002.

That means cheaper Magic cards if you are spending US dollars.

If you want to browse directly to their high-end cards, you can navigate as the image shows below to get there. For your convenience, you can toggle the currency displayed on the site from CAD to USD if you’re shopping from within the U.S.

After clicking on the "High-end MTG Cards" link, I’d recommend clicking on the checkbox on the right panel to only show cards that are in stock. The results I found when searching last were some Dual Lands, a Beta Demonic Tutor, a Mox Diamond, a couple Wheel of Fortunes, and more. In addition to the good prices, I’m also keenly interested in their heavily played cards in particular. It seems they price these cards competitively to TCGplayer, and it could be where you find the best deals.

This Tundra price isn’t too shabby, for example.

If the deal doesn’t quite tempt you yet, don’t abandon this arbitrage idea completely. In a couple of weeks, the US dollar could have strengthened further relative to the Canadian dollar. Suddenly you could see a 5% decrease in prices as a result. If that trend continues, eventually the deals will be too good to ignore.

The chart comparing the US dollar to the Japanese yen is even more interesting.

Right now a dollar can purchase you over 138 yen—this is the highest amount since 1998! Direct your attention to the rightmost portion of this graph, starting in 2021. Do you see the recent uptick? Once again, this is thanks to the rising interest rate environment within the United States. Since rates are likely to increase further this year, it stands to reason the US dollar will strengthen further relative to the Japanese yen.

How can we take advantage of this in the world of Magic? I’d start by visiting two Japanese card shops—both websites have English translation options, making them friendly to international shoppers.

First, there’s Hareruya. They know that international buyers shop on their site, which is evidenced by the currency conversion window they have on the left panel of their home page.

You can search for cards directly or browse by set. I like to do the latter, and navigate to the Old School sets since I often hunt for deals there. That being said, you could also browse for Commander staples, which may also be priced relatively well.

The best prices will be in the played copies Hareruya has in stock. Make sure you click on the little green box under a listing to see all conditions in stock along with their respective prices. I ran a search for Gaea's Cradle as an example. Their near mint price is 120,000 yen, around $866. Their heavily played price is 84,000 yen, which is equal to around $607. I ran over to TCGplayer to see the cheapest copy in stock there—it’s nearly $700! That’s a significant discount.

I can say with confidence that Hareruya does a fantastic job grading cards, packing them, and shipping them because I have made a few sizable purchases from their site in past years. Feel free to browse their inventory—if you end up making multiple purchases, they also have a loyalty program where you can earn points that you can recoup for store credit.

Another Japanese store you can shop from internationally is TokyoMTG. Right on the home page is the option to browse their new high-end inventory. It’s like they read my mind!

I clicked on that link and was able to browse all sorts of Old School listings. I must say the cards in stock are eye-catching, to say the least!

I like that TokyoMTG has an option to display prices in US dollars, saving me the effort of converting numbers repeatedly with Google. This site has all sorts of high-end cards including black-bordered Power, numerous Alpha and Beta cards, FBB Dual Lands, and more! As the US dollar strengthens, prices on this site will become more attractive as well.

As a result, I would definitely recommend keeping an eye on both TokyoMTG and Hareruya for great deals. I haven’t hunted these sites thoroughly, but I wouldn’t be surprised to hear about underpriced, attractive deals on these sites.

The last site I am going to touch upon is Card Market, formerly known as MKM. Prices on this site are listed in Euros, which also happen to be dropping in value relative to the US dollar.

Keep in mind this chart plots the ratio of euro to US dollar whereas the previous two comparisons had the US dollar in the numerator. Therefore, for the chart above, the lower the curve the stronger the dollar relative to the euro. You can see that the dollar hasn't been this strong relative to the euro since 2003. For one brief moment last week, the exchange dipped below one, indicating the dollar was worth more than the euro before flipping back over again.

Card Market has been around for a long time. The site is essentially the TCGplayer of Europe. One negative to this site is that you need to have a European address in order to purchase cards here. If you’re serious about taking advantage of arbitrage opportunities, I’d encourage you to find a contact overseas who is willing to purchase cards and ship them to you. The inventory on this site is impressive, especially for older cards, and prices are more attractive than they’ve been in over a decade thanks to the currency fluctuations.

I ran a search on my favorite card, Shahrazad, and I see there are more listings on Card Market (78) than there are on TCGplayer (42). The inventory of Old School cards on this site is especially impressive.

The best deals, however, may be on some obscure foils and Commander cards that lack in popularity in Europe. I’ll give you a random example, where I took advantage of a little arbitrage recently myself. I wanted to pick up a copy of foil Save Life, a goofy Unhinged card I used to own as a kid but since traded away. I went to TCGplayer, and the cheapest copy in stock was $100 for a moderately played foil copy! Yikes.

Star City Games, Card Kingdom, ABUGames, etc. were all sold out. EBay also didn’t have any cheaper copies. On Card Market, there is a handful for sale in the 10-20 euro range.

This is still extremely thin stock, but you can see how some more obscure cards can be had for good prices on Card Market.

If foil Save Life is a little too obscure for you, then look no further than Gaea's Cradle. Here is yet another site where you can purchase copies well below TCGplayer’s lowest prices.

Keep in mind that the euro and dollar are basically equal now so that 495 euro copy is going to be around $495! Granted, there will be shipping costs and the like, but even if you add in an extra $50 for those costs, you’d still be well below TCGplayer’s lowest English copy, which is approaching $700.

When shopping on Card Market, it's important to note that often the cheapest copies are not English, as is the case with Gaea's Cradle. Keep a watch out for language (denoted by the flag next to the condition) so you don't accidentally purchase a card you can't read. I will say that, despite not being English, the cheapest copy of Gaea's Cradle on TCGplayer is still $650 (Japanese), so these are all still a much better deal.

If you don't care about language and just want the cheapest copy out there, then Card Market is a great resource with a vast selection.

These are strange financial times in which we're living. The stock market has pulled back significantly, and we’ve seen investors reduce their exposure to riskier assets such as cryptocurrency. To combat rampant inflation, the Federal Reserve has begun aggressively raising interest rates.

I’m not an expert in macroeconomics, but I have heard and read that this action is leading to the strengthening US dollar. The result: the dollar is worth more than other currencies on a relative basis than it has been in recent years. In some cases, it’s been over two decades!

What does this mean for Magic finance? It means cards being sold outside the U.S. may suddenly become more attractively priced when converted to dollars. If this trend continues, we’re likely to see a large influx of supply from overseas coming to the U.S. This will pressure prices and lead to some more market weakness, but it’ll also mean deals will be found! If you’ve been waiting patiently for your chance to purchase some cards, your time may be coming.

You could wait for supply to reach our shores and prices to adjust, or you could be more proactive and seek out the opportunities overseas yourself from the sites I've listed here. I’m going to be paying more attention to this trend in the coming months, and I’d highly encourage readers to do the same. You just never know what deals you’ll find, whether it be a Dual Land, a piece of Power Nine, or some random foil Unhinged card you’ve always wanted.

The deals are out there, and they’re about to get even better. You just need to know where to find them.