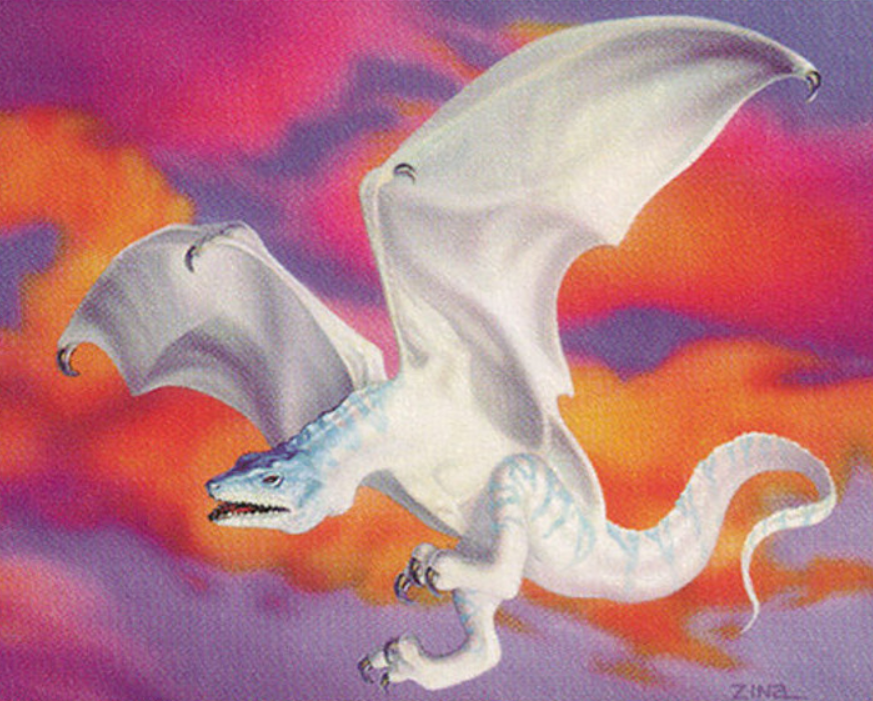 After cracking open Mirage and Fifth Edition starter decks last week, I was eager to try out the decks I built. As a refresher, I crafted a 60-card Jund deck attempting to exploit my bombs Lord of the Pit and Catacomb Dragon. With the remaining cards, I crafted a 40-card control-ish, double-Ray of Command deck just so I could play with the cards in the other two colors in my pool.

Both deck lists can be found in last week’s article.

As luck would have it, I had a faraway friend who was willing to build a deck or two in a similar fashion, using Mirage and Ice Age cards from an arbitrarily limited card pool. My friend built a 40-card deck with the ability to expand to 60 cards. Here’s their 40-card deck:

And here is the 60-card expansion package (top) along with a sideboard (bottom):

How the Games Went

I won’t lie: I was somewhat disappointed in the gameplay experience. After reminiscing about the “old days” of Magic and re-reading many classic cards I played as a kid, I was expecting the gameplay to also capture the full experience from childhood. While the cards were certainly fun, the games were hit-or-miss.

First, I had major difficulty getting a competitive game off the ground. My friend started out with the 40-card version of their deck, a four-color pile with Adarkar Wastes, Rampant Growth, and a Fire Diamond to help with fixing. Despite this stretch of the mana base, their deck managed to get to its feet and develop a board fairly quickly.

My 60-card deck, on the other hand, struggled to find all three colors consistently. We had two non-games right off the bat simply because I would open with a hand of three forests and all red and green cards. Then I’d mulligan into a hand of swamps and mountains with all green cards. It was that kind of day.

Another challenge was the fact that their Granger Guildmage had numerous one-toughness targets to destroy, which really kept my board clear while my opponent could stomp over me with flanking creatures. For those who may not be familiar with the archaic ability, all creatures without flanking that are assigned to block a creature with flanking receive -1/-1 until end of turn. This means one-toughness creatures can’t effectively block creatures with flanking, as they immediately die before damage. 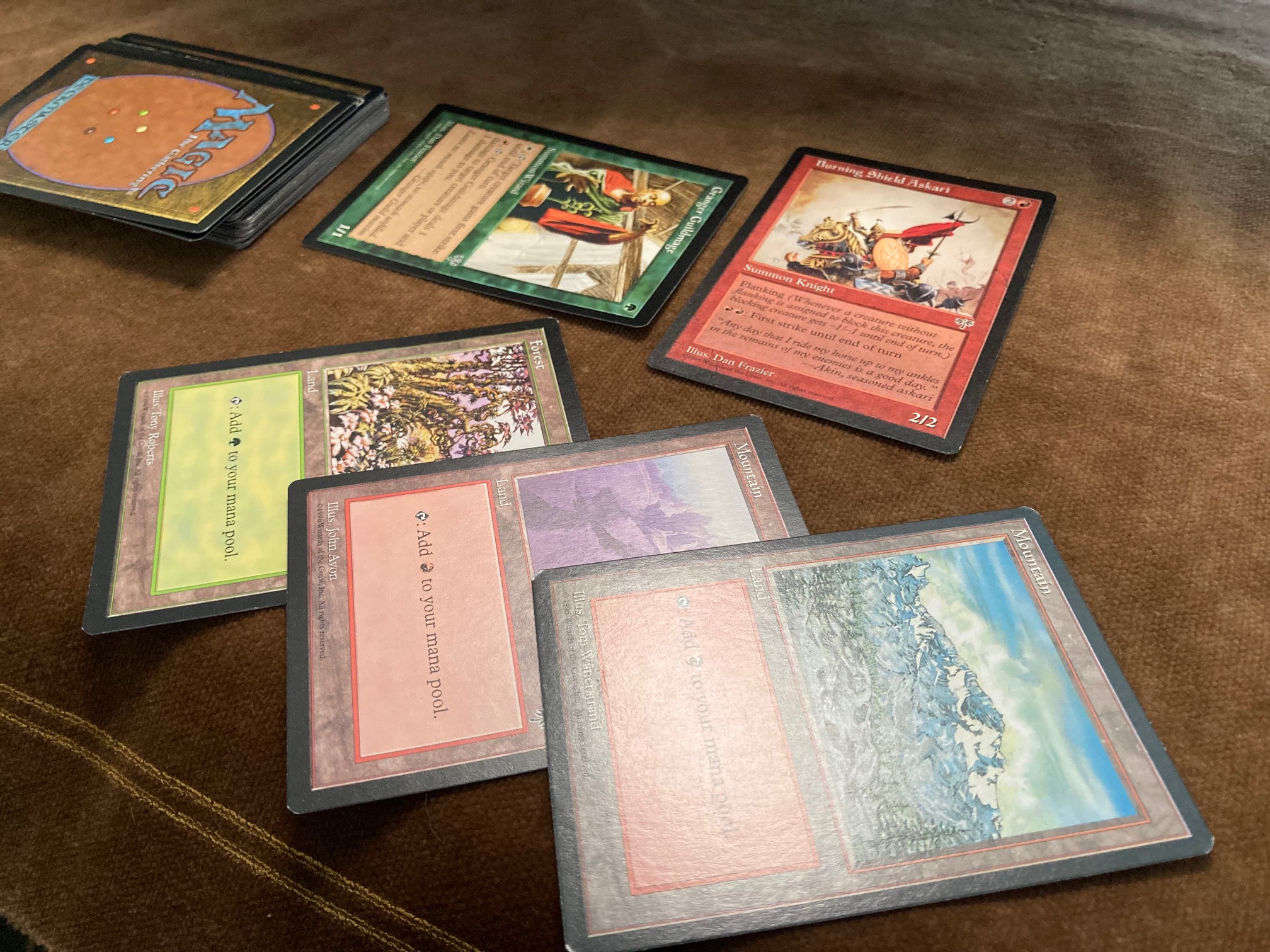 Out of desperation, I switched to the white/blue 40-card deck to see how that felt. The short answer: it was much better! Here’s a shot of my side of the battlefield during the game:

My opponent had attacked me with their Raging Spirit and Zhalfirin Knight, two creatures I had a tough time blocking. Their face-down card was a phased out Hazerider Drake thanks to the Teferi's Curse enchanting it. After my opponent declared their attackers, I cast Ray of Command to take the Raging Spirit with the intent of blocking and trading it off with the flanking Zhalfirin Knight.

In response, my opponent cast Reality Ripple targeting their own Raging Spirit in an attempt to phase out the creature and stop the two-for-one from happening. I had a Dissipate in hand and cast that in response to the Reality Ripple. Out of desperation, my opponent let the Dissipate and Ray of Command resolve and then cast Sapphire Charm to phase out the creature once I took control of it.

That play worked, and the blow-out was averted, but it was probably the most complicated series of plays across all the games. It was also the only game that really felt like a game! I learned that it is possible to recapture the nostalgia of gameplay from 1997—one just needs to be patient as only a fraction of games succeed in this regard.

We played one last game, my opponent, with the 60-card version of their deck, and me with my 60-card Jund deck. My opening hand this time had one forest, one swamp, and one mountain. We were off to the races!

Things started out strong for me. I cast various creatures and started beating down. Things took a turn, however, when my opponent started landing flying creatures. I wasn’t too intimidated by the Windreaper Falcon. The Ekundu Griffin was a little scarier and sped up my clock significantly, but I was still hoping to race. However, when they stuck their copy of Illusionary Forces, I knew my time was up. Yes, they could only attack with it once, but my life total was already precariously low at this point.

Oh, and the one card that was left in my hand at this point was… Lord of the Pit. It was stuck there because I only had one swamp in play. It was such a bummer.

I have always looked back fondly on my early days of Magic. I was quick to negatively judge new sets, thinking, “They just don’t make cards like they used to.” While that’s still true, I must say I learned a thing or two about how improved Magic is nowadays.

Beyond this high-level takeaway, there were some specific things I learned through this experience.

First, I remember thinking mana fixing was a waste of a card slot back in the day and that really held back our decks. The reason we didn’t notice this was an issue was because all of us within our play group made the same poor mana base decisions. Many games would occur where we would do nothing to the board for multiple turns while trying to draw the right land or colored spell. During these turns, it was like there would be an unofficial cease-fire. We also played less aggressively in general back then, failing to optimize attacks out of an unjustified fear of retaliation. This inevitably bought time for all players in the game while they could draw the right lands and fill out their board.

Now that I’ve been playing Magic for 25 years, I know a little more about combat strategies and how best to make my attacks. My opponent was similar in experience and skill, so there really wasn’t any mercy between the two of us. This more competitive gameplay led to non-games.

Secondly, I am in awe at how tiny the creatures were! After opening my two starter decks, I basically had to include every creature in my builds just to make sure I had enough. It reminds me why cards like Craw Wurm and Scaled Wurm were such powerhouses back in the day. Without a removal spell, these gigantic creatures would completely warp a game. Forget about cards like Shivan Dragon and Nightmare, which we couldn’t even afford to purchase. With such small creatures at common and uncommon, its no wonder board states would stall so often when playing as a kid. 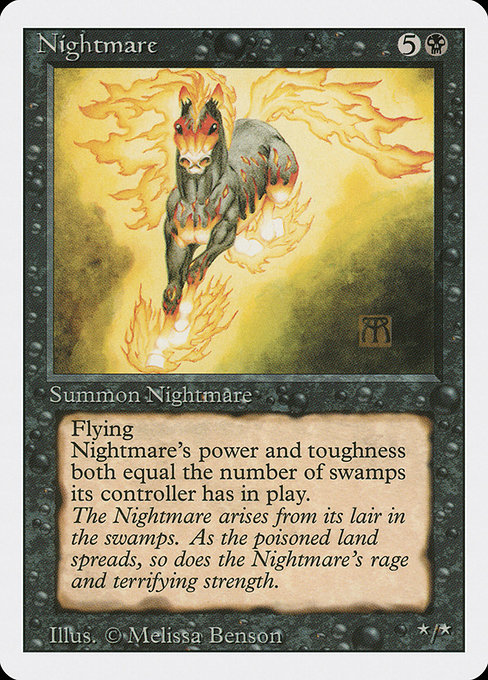 Thirdly, I can’t believe how lopsided flying creatures could be back in the late 1990s. Any evasion, for that matter, would be problematic in a game back then. When a board state clogs up and nothing can get through on the ground, having a flying attacker (or a creature with a relevant landwalking ability, or a creature with Fear) would be very difficult to stop. I got fresh experience of that first hand.

Finally, on a positive note, I was able to experience a small sliver of the thrill I had as a kid when shuffling up a new deck for the first time. Even though I never drew my Catacomb Dragon and I never cast Lord of the Pit, I was still so excited to show off these bombs to my friend during a game. I had a fantasy inside my head of being nearly dead to a 2/2 flyer when BOOM, I slam down Lord of the Pit and win after attacking twice. 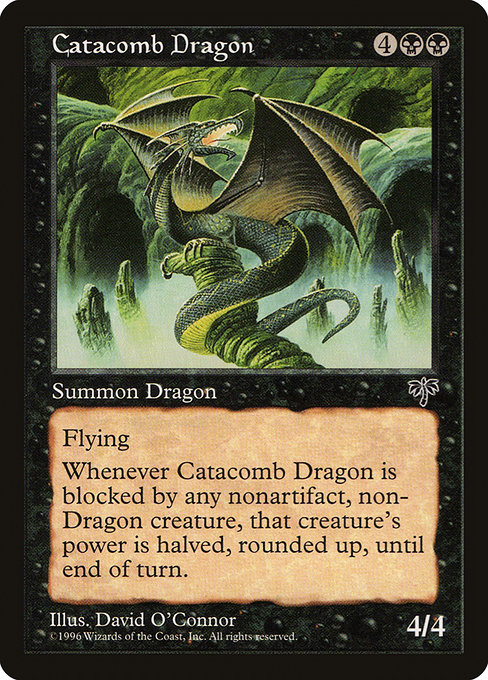 The real thrill is knowing that you have a sweet, powerful card in your hand that your opponent knows nothing about. Back in 1997, it could be the case that your opponent wouldn’t even know the given card existed, let alone that it was in your deck. The excitement of building something yourself and then “seeing it in action” peaked during this era of Magic. Once netdecking came along and kitchen table Magic evolved to Commander, that thrill evaporated for me. I am thankful to my friend for the opportunity to re-live the feeling once more.

As I reflect on this experience, I ask myself the question, “Would I be willing to do something like this again?” The answer is a muddled “it depends.”

The Fifth Edition starter deck was $199.99 in store credit on Card Kingdom, while the Mirage starter was $299.99. If it had not been gifted to me, I most certainly would not purchase them myself to have this experience again. While it’s hard to put a price on chasing memories, I don’t think this exercise is quite worth the steep entry price.

Instead, I would be more inclined to purchase an already-opened sealed starter. You know, the one where Lion's Eye Diamond is already confirmed to not be in the deck? This would be far less expensive and really wouldn’t sacrifice too much of the experience.

Better, yet, I have another idea that I’ll pitch to my friend. What if we take our 120 or so cards and set them aside as a separate collection of sorts. Then we can buy (sealed or unsealed) booster packs of sets from that same time period to “grow our collection” and improve our decks, just like we would have done back in the 1990s. This would be akin to starting over again and attempting to recapture the same experience we once felt back in the day. Maybe we can even cap our spending at $5 a week, akin to the average income I had as a 13-year-old. Something like this eBay listing could be tempting.

I’ll continue to investigate options. One thing is for sure: it was exciting to recapture the fun childhood experience that Magic once brought, but I learned that achieving the feeling as an adult is no easy (or cheap) feat!

One thought on “A Flashback to Childhood: Part 2”