Whether drafting is your thing or not, participating in an Unfinity draft can be a fun and silly way to let your hair down. You not only play Magic, but you have an opportunity to develop many potential talents! You could work on your oration skills using Carnival Barker, maybe practice your dexterity with Plate Spinning, or just win games with Comet, Stellar Pup.

Drafting Unfinity can also help you get to know a little more about the people around you. Maybe you find out one of your friends is a card thrower extraordinaire after they play Knife and Death. It can be such enlightening fun. Of course, I happily took my own advice and joined a draft at one of our local stores, Mavericks.

Our Octuple of Outlandish Organisms

I was even able to provide some assistance to the store before we started. They were initially thinking that you passed the land along with the rest of the pack, like most other sets. I happily shared Mark Rosewater's confirmation that you keep the land as well, and we were ready to go!

Fortunately, all at this table are well-versed in Magic, so with a little bit of specific Unfinity instruction, we were all ready to sling some cardboard.

These Aren't Your Grandmother's Magic Cards

I ripped open my first pack to find a nice borderless Sacred Foundry starting back at me! I really do appreciate the artwork on these, and would love to get more of them, but being fortunate (and old) I do have a set of the originals, so my desire to have them isn't as strong. Awesome art! The draft pods before and after us both had one shock land pull as well. Sounds like the one-per-box estimate was pretty spot on. What's your pack 1, pick 1?

My first pick was How Is This a Par Three?!. I do enjoy a mill deck and thought if the game stalled out, I would have an alternate way to win. Unfortunately, I never had the chance to really get it going. Throughout the whole draft, I only drew it twice and played it once.

As you can see, I didn't have any real focus with just this pack, other than leaning toward black and blue. I did think those two Glitterflitters and Haberthrasher might be the start of something, though. On to the next pack! What's your pick?

Ok, now we have a game plan: Hats and stickers! With Roxi, Publicist to the Stars and the multiple Focused Funambulists, we can really start to utilize the life loss from the Haberthrasher.

I believe we have a deck now. I finished up with a third Focused Funambulist, a Scared Stiff, and a very useful Proficient Pyrodancer. Gray Merchant of Alphabet was the icing on the cake.

I was able to round out the removal suite with a couple of Boing!s, Wolf in _____ Clothing, Attempted Murder, and Super-Duper Lost.

You may recall Keith from my Double Masters 2022 draft article. He built a GW deck and was ready to inundate me with his plethora of attractions!

I apologize for the glare, but between the incremental life loss from the Haberthrasher and attacking with a pumped up Roxi, Publicist to the Stars I was able to take Keith down on this one. He did play _____ Bird Gets the Worm a couple times to make it more difficult, but the +2/+0 and menace ability from Proficient Pyrodancer made it less of a problem.

Second verse, same as the first. As you can see from the second picture, both games were very similar. Same creatures and same result. Keith did get four Attractions out at once, though! If he'd had better dice rolls, I probably would've been in trouble, but the dice gods did not smile down upon him this time.

The Special of Un

Here's a prime example of the goofiness and silly fun that Un-sets can provide. Jay and Famine were playing on my left, and a few turns into their game, Jay shouted out loud. I turned and saw this expression of joy:

The reason is evident in the green sleeves on Jay's head and in the picture below. Even though the Centaur of Attention with five dice on it is cool, that's not it.

Form of the Approach of the Second Sun 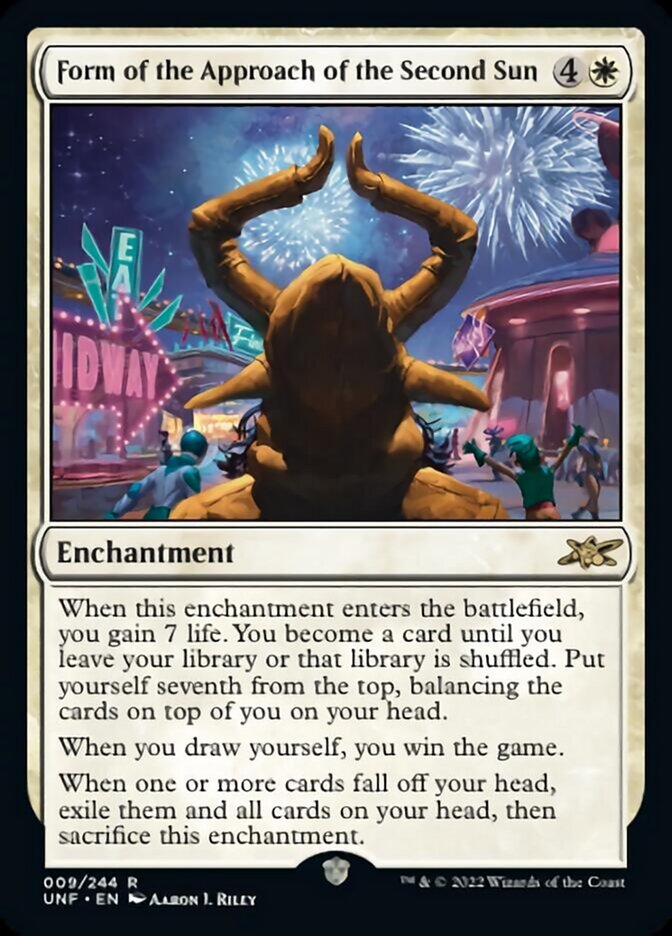 I'm unsure if he was able to win the game with the latest Form card since I had to switch back and focus on my game with Keith, but it was fun to see it in action.

Round 3: Famine on GW Pump

Famine was a new player to the store and hadn't been out in a while, but they couldn't pass up the chance to draft Unfinity. Famine put together a GW deck with sticker effects and pump spells like Embiggen.

I forgot to grab a picture of our first game, but suffice to say, Famine ran me over with big tramply creatures and a couple of clutch removal spells like Gobsmacked.

Famine was stunted on mana too long in this game. I was able to beatdown in a similar fashion to my games against Keith. Toward the end of the game, Famine was able to get a couple of small creatures on the board to give him a little breathing room. I played Wolf in _____ Clothing choosing the Shenanigans sticker, cleared them away, and swung for lethal.

The rubber match was quite a bit more interesting and we both ended up at nine life. Famine Gobsmacked my Roxi, Publicist to the Stars to stem my flying beats, but between an Attempted Murder, and two timely Boing!s, I was able to take the match.

The "Extra" Special of Un

Let's take a moment to go back to Jay and Famine's match. Sometime after Jay resolved Form of the Approach of the Second Sun, he started giggling again. Here is what I saw on the board:

In case you're unable to see it, here is what Jay did:

Yes, he played Photo Op to get Enter the Dungeon and start a sub-game...under the table (shown below).

Still, that's not the most hilarious part of this exchange. A few turns later, Famine was able to respond in kind (forgive the under-the-table glare): 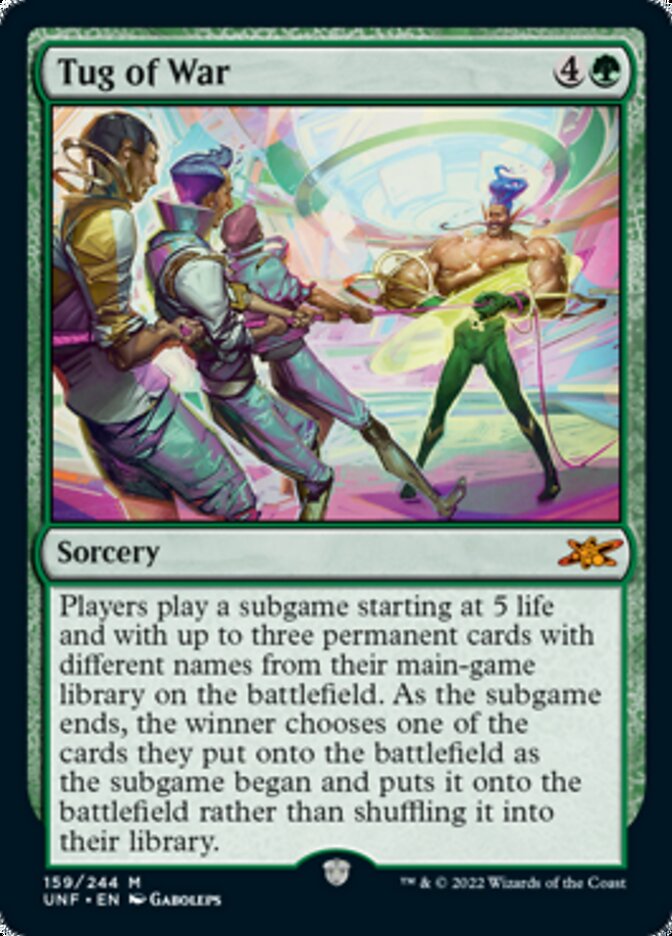 Final level achieved. End boss defeated. We now had a sub-game within a sub-game! Jay didn't win the sub-games, though, and that more than likely led to his ultimate downfall.

Round 3: Patrick on RW Clowns

Patrick defeated Zak and Ben after Ben defeated Zach. Patrick is normally a Constructed player, but has been having fun playing Limited formats a little more often lately. Either way, we were both ready to battle, goofy-style. We went ahead and split the pot, but still had to play for the box topper! Of course, playing Unfinity isn't a have to, but a want to. 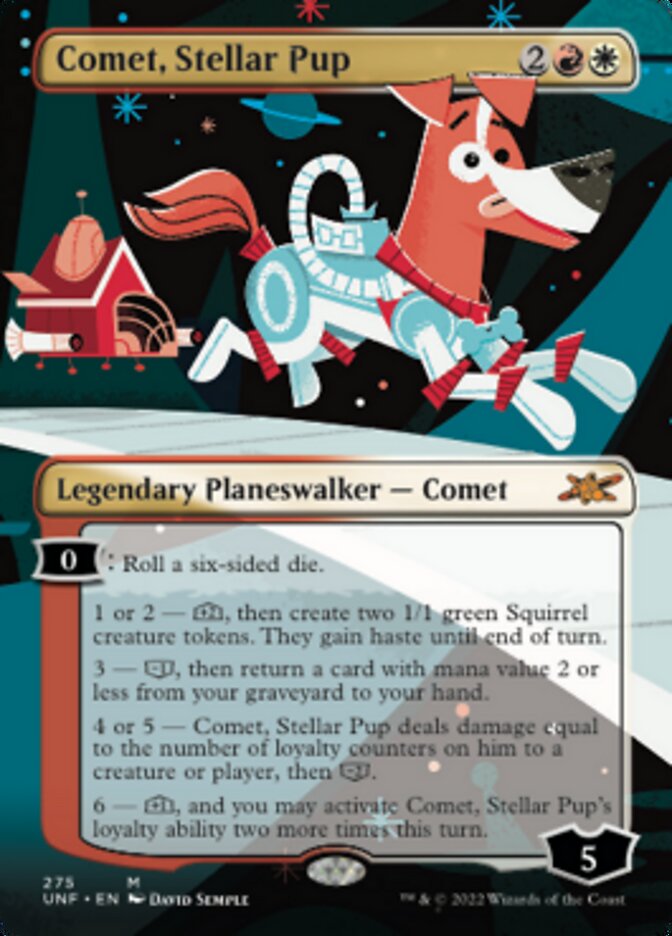 Unfortunately, I lost the first game so quickly I forgot to take a picture. Patrick's aggressive RW clown deck was able to land a turn two Sanguine Sipper, and with a little pressure, put me on the back pedal. I was at 10 life with him at 26. I played out Roxi, Publicist to the Stars and Dee Kay, Finder of the Lost to hold him off a little. That hope was crushed when he slammed Comet, Stellar Pup. He proceeded to roll a six, then follow up with a four and a five to remove both of my creatures. Mind you, I probably wasn't winning that game anyway, but Patrick's planeswalking puppy proved a very good boy.

The second game was more back-and-forth. He started going wide with Pietra, Crafter of Clowns and Assembled Ensemble, and I had a small group of flyers. Patrick was at 12, and I at 13. I swung with a pumped Roxi, Publicist to the Stars and a Glitterflitter to take him to three.

I thought I was going to have a couple of blockers to be able to absorb enough damage and finish him next turn. Patrick not only played Goblin Cruciverbalist, but took my untapped Glitterflitter with Amped Up to steal the game and match.

Even with the final round loss, it was an awesome time. You still want to win, but it's a different feeling. I found that winning or losing isn't as big a focus. Doing something wacky is, and we definitely had that in this draft pod. The experience was very enjoyable, and I would be happy to join in at least a couple more.

Greatest Show in the Multiverse 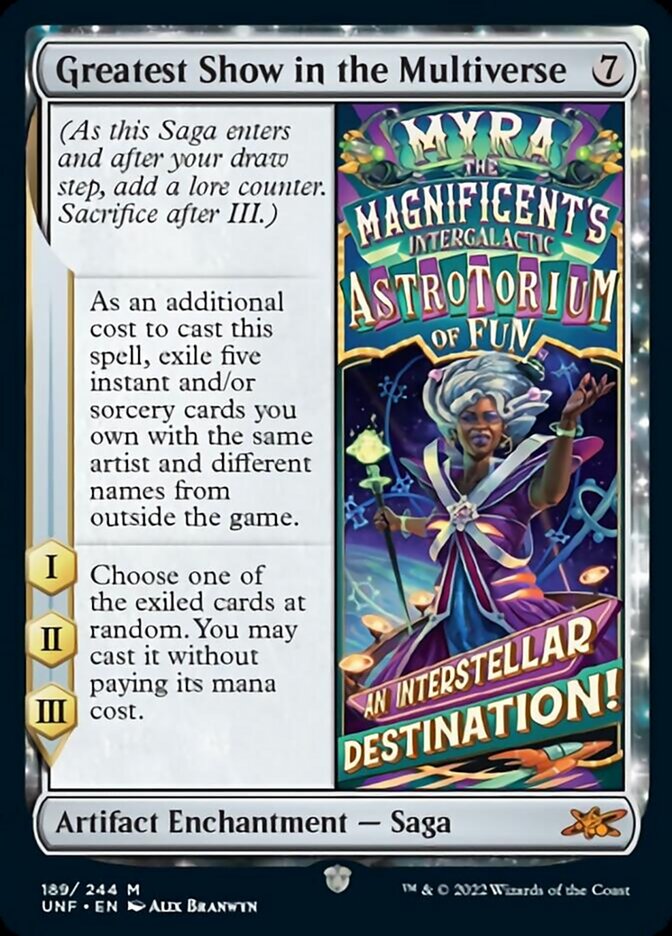 A couple of notes for anyone looking to join an Unfinity draft that hasn't had the opportunity yet:

I hope that you've enjoyed this trip through my Unfinity draft. Please also share your fun and wacky draft experiences with the set in the comments or on Twitter.