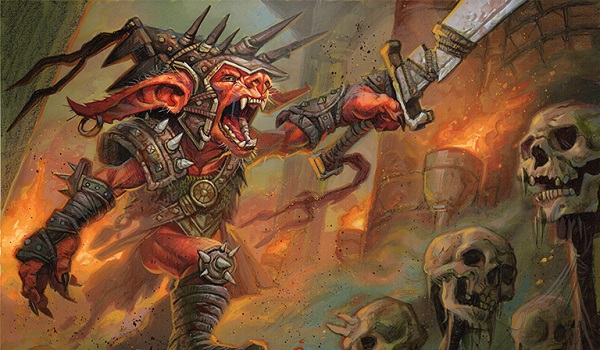 A local venue just had their biggest Two-Headed Giant Commander event of the year, with two awesome Revised Plateaus as the grand prize. My partner and I had placed third, third and second in previous events. This time, we didn't just want the win for store credit; we needed the win for bragging rights... and dual lands!

The most interesting aspect of Two-Headed Giant Commander is the team element. Virtually every play is heavily contested with all four players involved. At levels of interaction like this, it's important to play the absolute lowest mana value spells. For that reason, let me present you the best Commander at the event, the one I somehow convinced myself not to play. 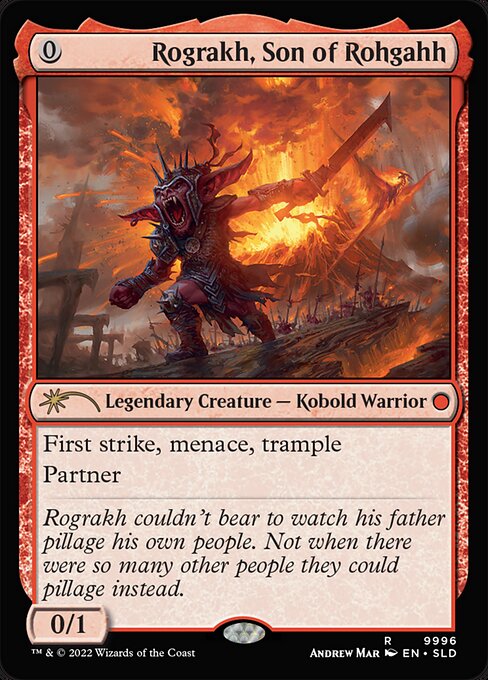 For zero, Rograkh allows you to play the Ikoria Commander free spells. Having both Deflecting Swat and Fierce Guardianship up turn one seemed very good. Not only that, but access to better mana rocks and acceleration from cards like Springleaf Drum, Paradise Mantle, and Infernal Plunge was attractive.

My thought was Rograkh, Son of Rohgahh and Ishai, Ojutai Dragonspeaker as partner commanders. My teammate wanted to play something stax-heavy like Grand Arbiter Augustin IV. Previously, we had one deck as an all-in combo, while the other sought to protect it. But with so much free counter magic and cheap stax effects, an all-in combo deck simply does not work. So we started brewing, building, and even play testing.

We Decided to Try Something Different...

Something something, best laid plans. I was trying to figure out how to make the decks co-exist and not get staxed out by our own plan. Blood Moon was well on my mind for multiple reasons. At the same time, my teammate was looking at shiny blue cards and wondering if those could be added. Slowly, both sets of ideas morphed into Baral, Chief of Compliance and Zur the Enchanter.

Certainly, we would have a ton of counter magic and could tutor for the ideal stax effect thanks to Zur and Enlightened Tutor. Zur had a more consistent wincon, utilizing Unspeakable Symbol to just kill someone. We were highly resistant to stax enchantments and artifacts from the white include. It seemed like the pros outweighed the cons. We were running Mental Misstep, Force of Will, Force of Negation, and Fierce Guardianship. Playtests went well versus a couple of different decks. The flexibility of Zur proved a major selling point because he simply could remove anything by attacking, and once we had board control, the game ended in short order without relying on a combo.

Our opponents? An ultra stax-heavy Urza, Lord High Artificer plus Derevi, Empyrial Tactician that had either beaten us or drawn with us in past events. We shut them down cold. Our plays were optimal; we hid behind a Standstill until they gave us three cards each and won the ensuing counter battle.

If the game didn't go to time, they would have died in two turns to Stasis and Zur, but we sandbagged hard and forced the draw.

Turns Out None of That Mattered (But Some Things Did)

From there it was out of our hands, literally. Our opponents in game two resolved a Windfall but I had a Narset, Parter of Veils on the table already and they knew it, so, yeah, that was a huge misplay. They discarded their hands and we drew six cards. Freebie.

In match three, we were plagued by bad draws. We had to mulligan twice and kept hands with six mediocre cards. Should we have mulled to five each instead of keeping a playable, but not ideal, six? The answer is yes, absolutely.

We never had a turn one Sol Ring in any game, but in each round, at least one of our opponents had faster mana. My partner kept a two-land hand full of interaction but never drew a third land. At the time keeping a modest six seemed fine, but it ultimately proved a bad decision.

In retrospect, without at least two forms of interaction every turn for the first three turns, a team was dead in the water, and this match also showed that Angel's Grace was a completely live card we just didn't have in hand. 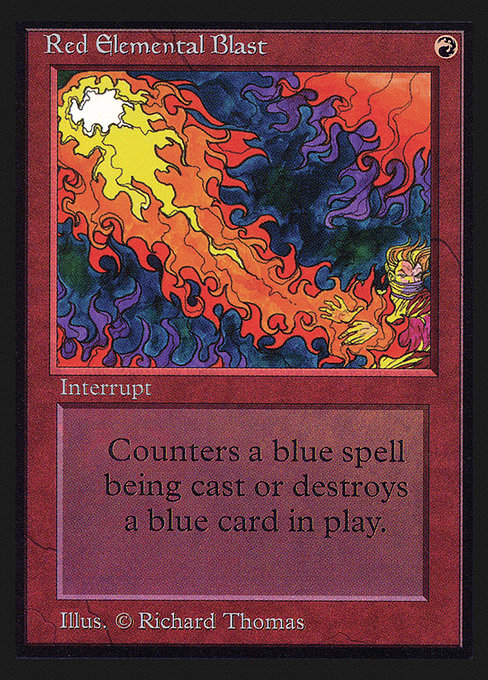 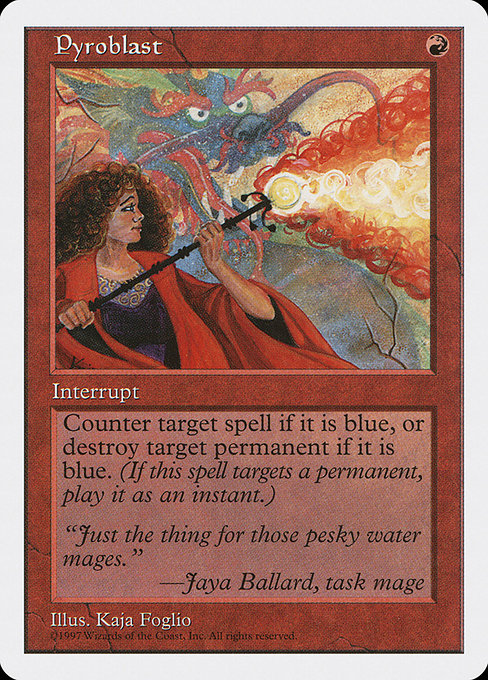 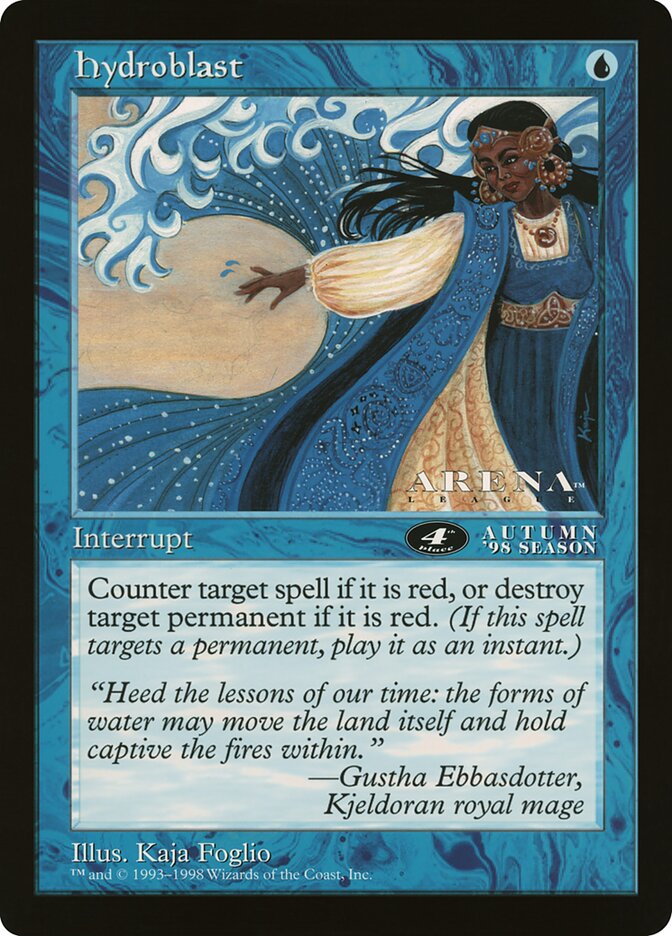 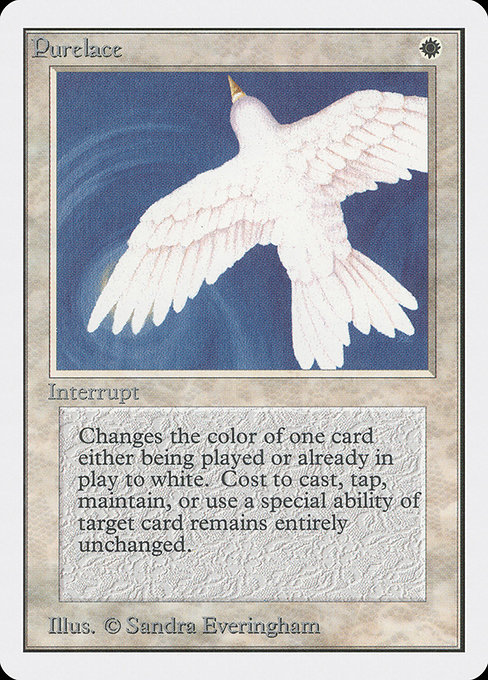 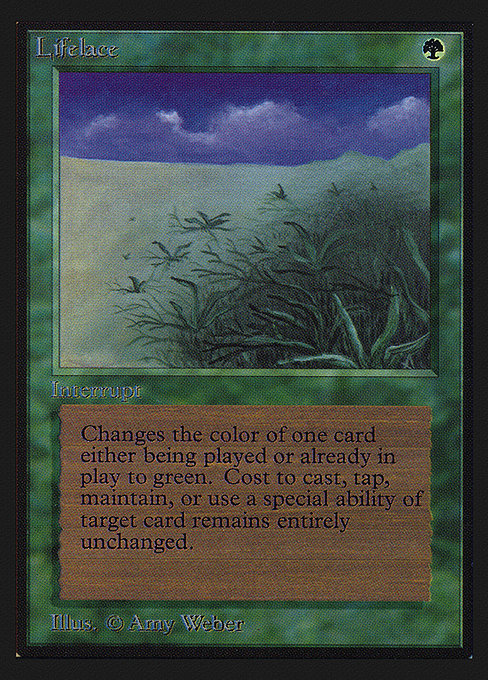 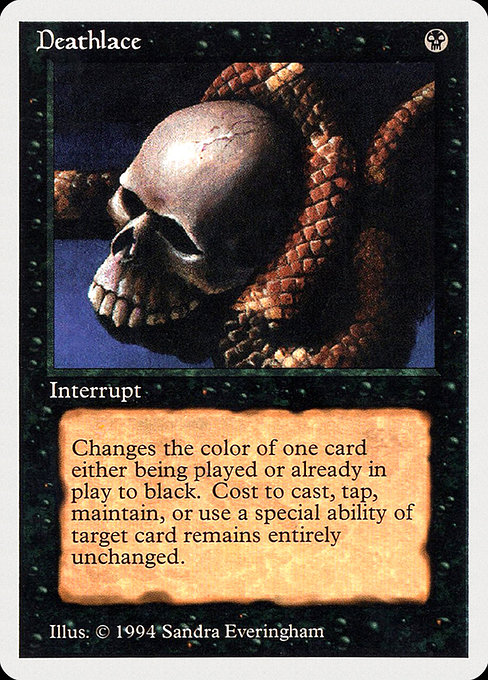 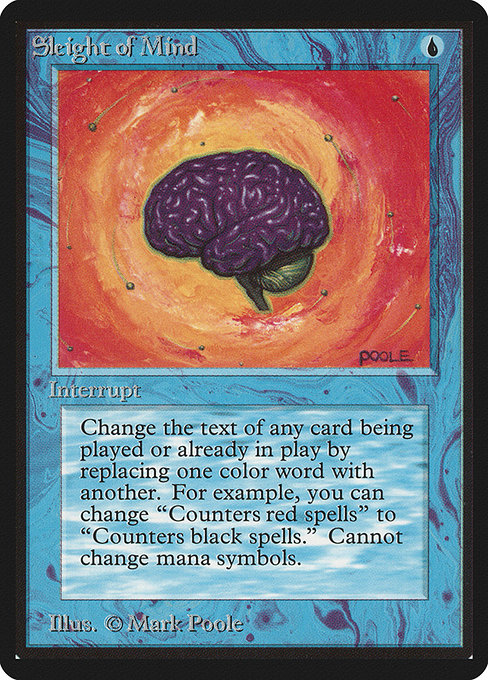 Of course the various Blasts like Red Elemental Blast and Blue Elemental Blast have been well-known, highly played cards throughout Magic's history. This tournament was proof positive. Incredibly enough, in a meta of Blasts, the absolutely garbage-tier 'Lace cards are live!

As older cards go, there are several sleepers that do something at the one mana mark. The following cards would have been extremely powerful this event. 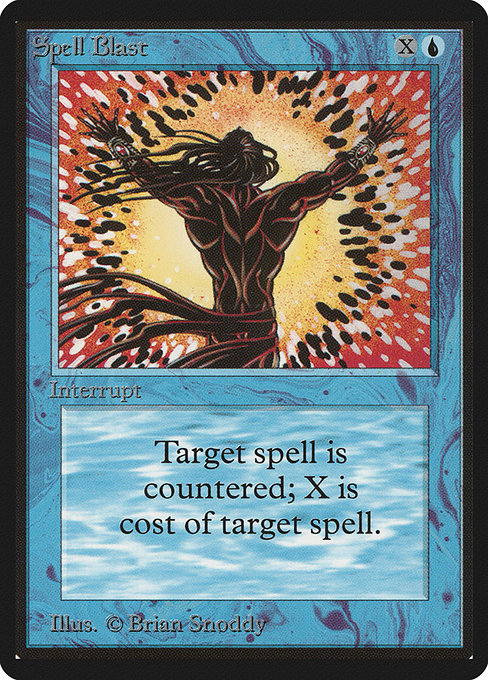 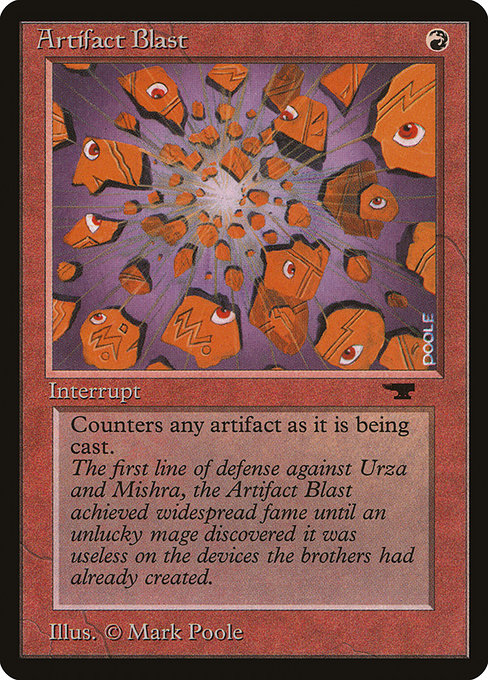 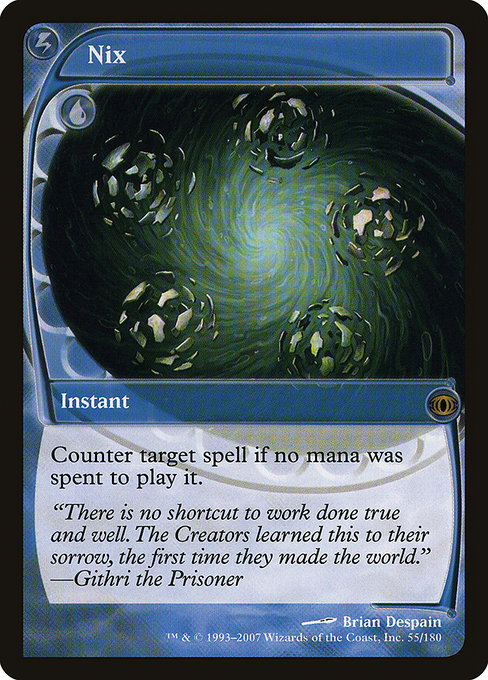 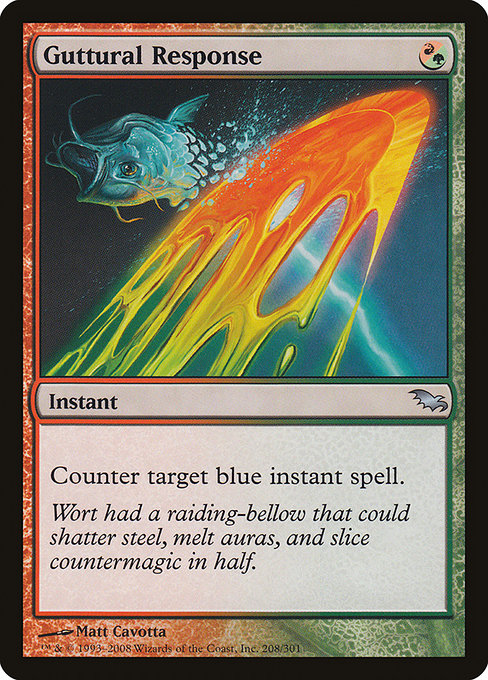 None of these cards show on any EDREC top 100 list. Even so, they would all have been great at this event. This reinforces two general ideas I have about Magic. First, mana cost, not what a card does, is vastly important. Second, the strength of cards is relative to the meta; nothing exists in a vacuum. Historically "sub-optimal" cards like Spell Blast were popular against Black Lotus, but have fallen out of favor over time. Our meta call should have been ultra-focused on one- and zero-mana spells. Furthermore, we needed more creature hate, and less artifact and enchantment hate. Unfortunately, we zigged when we should have zagged.

Also, We Did Something for the Memes

Our match record was one, one, and one, so I cannot say my heart was entirely in it for match four. This turned out to be a big mistake because, there were so many draws that we actually would have made top four with a win. It's important to stay focused and high-energy.

Originally, my teammate wanted to include a lot of cards that were much more Timmy than Spike. While I was able to reel them in a bit, a couple of cards were non-negotiable. It was their goal to have an opening hand with Leyline of Anticipation and Jeweled Lotus so that they could flash in Baral and counter a spell on our opponents first turn. Well, we got two out of three!

This venue has had a generous prize for the best-named team, and the team names are usually pretty funny. While it was a very competitive environment there was room to have a little fun. However, we might have built just a little too loose, and that is on us entirely. The ultimate winners had a 5-color good-stuff Najeela, the Blade-Blossom and a turbo Ad Nauseam with Silas Ren and Rograkh, Son of Rohgahh. They knew that free spells including Deadly Rollick were just too good to pass up, and had further help from Culling Ritual and Diabolic Intent.

While I was disappointed to not take home a Plateau, I did learn a lot, not only about the local metagame but also my own thought process both pre- and post-event. I'm already analyzing and re-optimizing, and am fairly certain that white is the answer here even though black offers some compelling cards. However, there is zero chance I'm not bringing the Kobold next time.