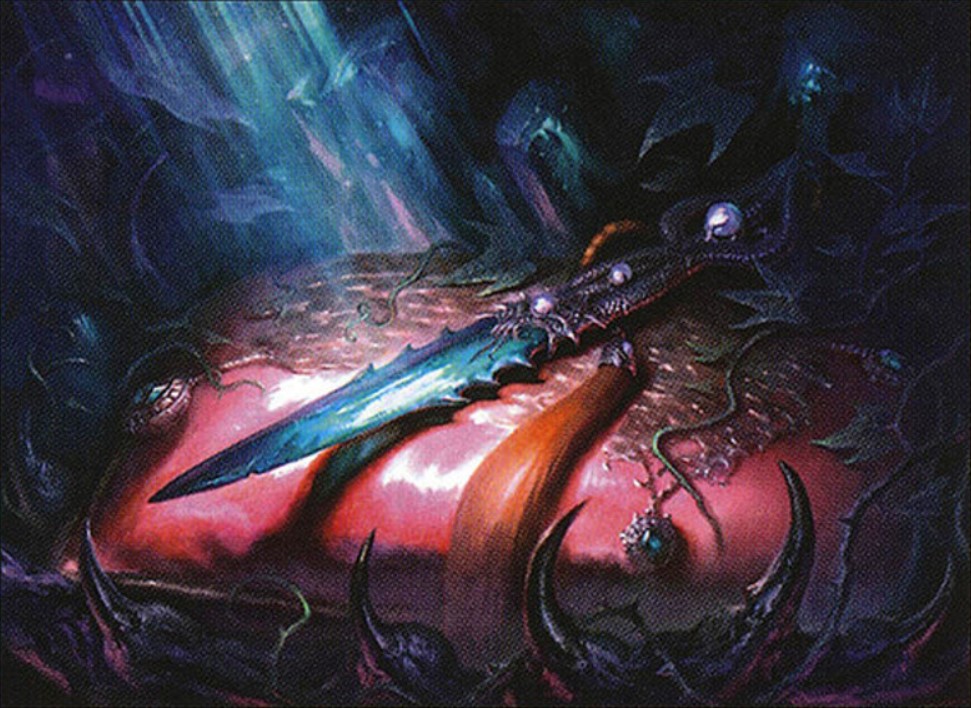 All types of assets, not just Magic cards, are struggling to gain traction across the board. I’m observing this trend in the stock market and the collectible video game market—I have to assume the same goes for other collectible markets as well. As a Magic finance writer, of course, my primary focus is on the price of cards.

People aren’t willing to pay for such luxury goods given inflation, overall market uncertainty, and an array of other factors. This has led to some noteworthy weaknesses across the board. I'm suddenly reminded of the old Warren Buffett adage, “Be fearful when others are greedy, and greedy when others are fearful.”

The big question becomes, how do we know we’ve hit bottom? What if we buy at these discounted prices, only to see prices decrease even further? The classic “falling knife” conundrum comes into play.

For those unfamiliar with the expression, attempting to catch a falling knife is a term used commonly in the investing world to describe the practice of purchasing an asset that is rapidly decreasing in value. Often times these declining entities (such as stocks) can become attractive because their valuation had suddenly become much cheaper.

Like the literal interpretation of the expression, however, the proverbial “catching a falling knife” can also have devastating effects. You don’t risk physical harm, but you certainly risk harm to your net worth!

I tried Googling where the expression originated from (in the context of investing…surely, the first use of the phrase referred to food preparation in the kitchen for the literal interpretation). I found one citation in Reddit that dated back to 1919 in Harry Johnston’s The Gay-Dombeys: A Novel:

“I’m only infectious now as a political and social delinquent, and if you’ve much regard for your own welfare you oughtn’t to mix yourself up with my affairs…What’s the saying? ‘Never catch a falling knife or save a falling friend!”

On the stock market, prices can move very rapidly, dropping significant percent in a given month, week, or even day. Take a look at once-darling Upstart Holdings Inc, a stock that went from near-$400 to $15 in just over a year.

It was easy to think that after dropping over 50% from $380 to well below $200, this stock was suddenly attractively valued. The falling knife would have cut you badly if you had bought it, as the stock still had yet another 80+% to drop from there!

Magic cards don’t typically move this drastically or this quickly. The exception is when an old/rare card is reprinted in a Standard set. Instead, the price chart of many collectible Magic cards looks more akin to a gradual, steady decline over a similar time period as Upstart Holding’s collapse.

Check out the price chart above for Underground Sea, once the most desirable Dual Land of the cycle (since replaced by Volcanic Island). The best buy price on this card peaked at around $730 less than two years ago. Today that number is just $471. A 35% decline pales in comparison to a stock like Upstart, but this was supposed to be a blue chip card! It would be more apt to compare Underground Sea to a blue chip stock like Apple.

The fluctuations in Apple’s stock are larger than that of Underground Sea, but the net decline over the past year is more comparable.

If you want to see something more Upstart-like in Magic, you’ll have to turn towards an old Reserved List card with far less playability. Let’s check out the graph of Pixie Queen for comparison. 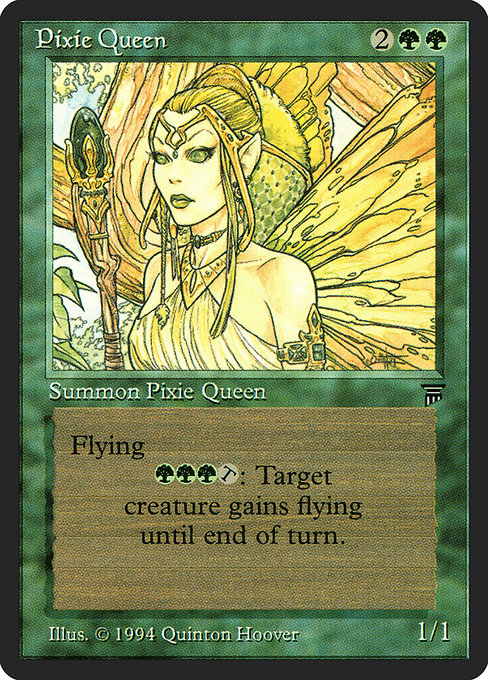 This is one of my favorite Legends cards—it’s neat to see a green flying faerie as I can’t imagine there are many (my search yields 12, not counting multicolored creatures). The classic Quinton Hoover artwork is also one of my all-time favorites. Perhaps others agreed at one point, and that’s why this card’s price soared to over $150 with a peak buylist of $120.

In any event, today the best buylist for Pixie Queen is a meager $38, a whopping 68% from its peak! Talk about a falling knife!

Other cards I’ve found with comparable price declines include some less-than-desirable Beta rares, Golgothian Sylex from Antiquities, and Singing Tree from Arabian Nights.

Is It Time to Play Catch?

If last year’s prices felt far too high, and you were priced out of some of these iconic, historical cards in Magic, you may start to get tempted by these pullbacks. Of course, the question becomes, “Is it time to catch the falling knife in Magic?”

I don’t have a crystal ball. I could make a bold statement and say “YES, now is the time to lock in lower prices and buy!” but I’d have no basis for such a claim outside of an arbitrary guess. I’m not going to try and apply technical analysis to the price charts of these Magic cards like people do for stocks, and pretend they have validity.

Rather than try to force some sort of hot take, I’ll follow a more pragmatic approach. If you want my advice (remember, I’m not a financial adviser and you should consult with a professional before making any investment decisions… the usual disclaimer), I’d say there may be an opportunity here to begin cost averaging into cards.

In other words, it may be a good time to start buying a little bit if you do so gradually and strategically. If you have $1000 you want to put into Magic, don’t spend it all at once today. Maybe buy a couple of well-priced cards next time TCGplayer does a promotion, then bid on a couple more on eBay, and see what happens.

Some Ideas to Consider

ABUGames has a ton of played Old School cards at auction that keep dropping in price as they fail to sell. I’ve been watching these for months now, and I’m amazed by a) how cheap these cards are becoming prior to selling and b) how many Beta rares ABUGames has listed for sale at any given time. My current count is 444! I remember during the peak of valuations, ABUGames would not have more than just a couple for sale at a given time. Remember, these are their auctions only—they have more cards listed for sale with buy it now!

In case you’re wondering, I am putting my money where my mouth is. See that one bid on the Beta Web above? That’s me. I’ll buy pretty much any non-damaged Beta rare for under $50. 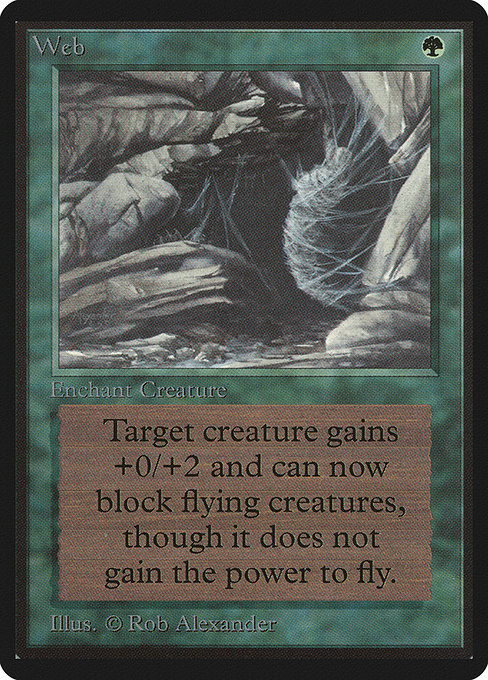 It’s the first Beta card I’ve attempted to purchase since selling most of my collection in Las Vegas. Additionally, the last time I received a little Card Kingdom store credit, I actually used it to pick up some Old School cards rather than sealed product.

You can see above that this wasn’t a gigantic purchase. Little by little, that’s the name of the game here. When attempting to catch a falling knife, you must proceed with extreme caution.

Why did I pick up these cards in particular? It’s a combination of factors, but there are three major ones to consider:

By sticking to these principles, I hope to cautiously and deliberately scale back into Magic little by little.

By pursuing the strategy I detailed above, I am not guaranteeing myself anything. It is certainly possible prices tumble even further, and I get cut by the proverbial falling knife. By taking this gradually, though, I hope to minimize the damage while also taking advantage of the recent sell-off. I think prices will eventually bottom, so it stands to reason that picking up a few cards here or there could eventually yield profits.

In the meantime, we need to exercise extreme patience. When prices bottom and things turn around, it won’t happen overnight. We won’t wake up to a 20% gain in our Magic portfolios. There will be ample time to scale in and acquire cards at these attractive prices. Because of this, I urge you to resist the FOMO and avoid any impulse purchases. Since there is so much time to react, we can afford to wait, be picky, and choose our entry points with extreme care.

This is precisely what I’m doing and what I hope to continue as the New Year comes in. Mind you, I don’t plan on going very deep in Magic like I once was. However, when I see an opportunity present itself, I can’t ignore it! With any luck, I’ll have another modest collection to sell at a future Magic event a few years from now.

2 thoughts on “To Catch a Falling Knife”