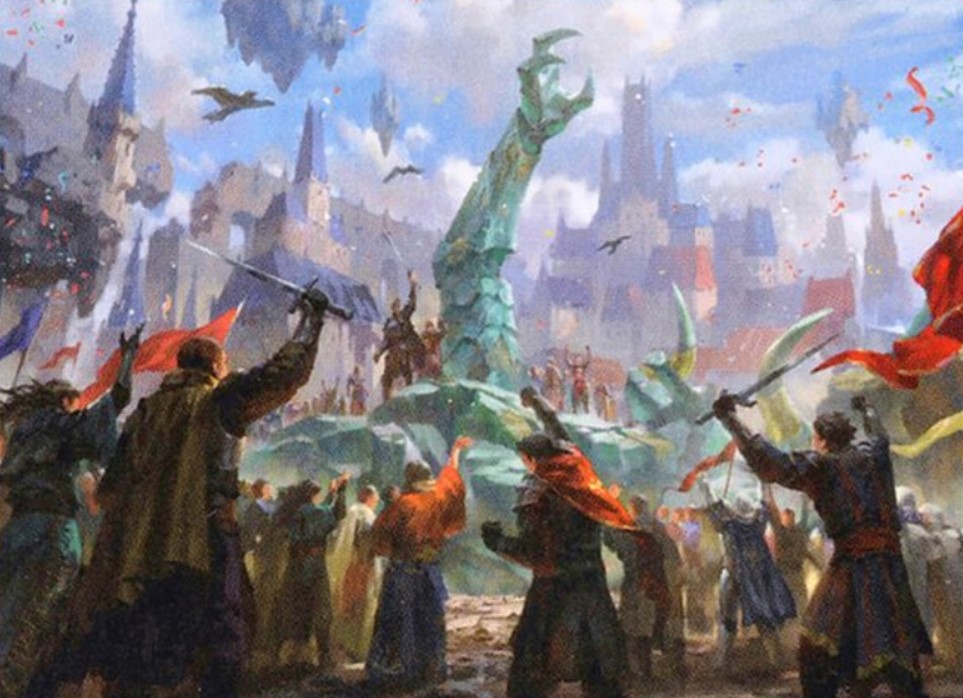 This is the time of year I usually pause and reflect on what I accomplished over the past 365 days and what I would like to prioritize for the next year. I've been doing this for a while now. This year, 2023, is no different. What is different is my new approach to this beloved hobby, Magic: the Gathering.

You see, yesterday I went to my LGS with my 10-year-old son. We both had a small smattering of singles from recent booster packs we opened over the holidays (many pack wars ensued). Of course, he was a good bit luckier than I, so he had two Unfinity Shock Lands to sell along with a Phyrexian Fleshgorger. 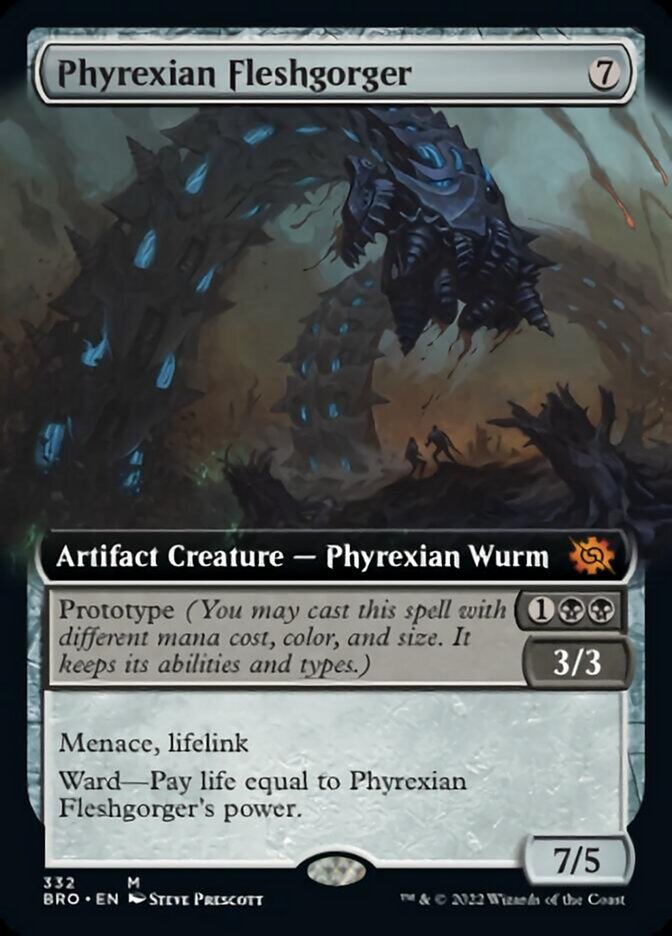 My wares consisted mostly of Jumpstart 2022 leftovers. He sold four cards and netted over $50 in store credit—I sold about 15 cards and managed to build up a mere $22. It was enough.

A New Appreciation for the Game

Initially, I made the decision to sell my cards to this local game shop for two reasons. First and foremost, Card Kingdom wasn’t buying these cards at the moment so my normal go-to store wasn’t an option. Second, I was looking for something to do with my son and I knew browsing their selection of cards and games would be a good way to spend an hour of quality time together.

What resulted exceeded my expectations by far, and something amazing happened on that day. I didn’t focus solely on the financial aspect of what I was doing! I was able to let go of the finance mindset enough to experience the pure enjoyment of trading cards with the shop! That may not seem significant, but for the guy who prioritized Magic finance first for over a decade, thinking about something beyond the money was quite refreshing.

With the store credit I accrued, I purchased a French Planar Chaos Damnation and a Sulfurous Springs for my Commander deck. I even had a little credit left over so I picked up a Neon Dynasty booster pack. Trading in a small stack of singles I knew I wasn’t going to use to pick up a couple of key cards for a deck felt so rewarding.

My son’s transaction was arguably even more successful. The first thing he asked about was a sealed Unfinity booster box. He indicated he would be willing to combine cash with his trade credit to buy the box. I steered him away from this decision by arguing that he already had the cards he wanted most from this set and if his angle was to open more Shock Lands to sell, it would most likely be a losing proposition.

That’s when he asked me about Dungeons and Dragons.

My Two Resolutions For 2023

For 2023, I am making two New Year's resolutions related to gaming. While the first resolution stands on its own, the second has a close tie to Magic finance, as I'll explain.

I never played D&D as a kid. A friend and I dabbled with Hero Quest at the time, a much simpler game of a similar genre. D&D is a whole separate world with rules that, to a newcomer, outclass even Magic when it comes to complexity. That said, I think it’ll be a tremendous bonding opportunity for my son and I so I’m going to make the effort to get a campaign going.

To start, we’re going to use the introductory kit and figures he bought using his store credit the other day. It turns out, while $55 may only get you a few desirable Magic cards, it can purchase you a D&D starter kit and ten figures to represent heroes, monsters, etc. As we walked out of the store, I was impressed by my son’s trade-in. Who would have thought a few pieces of cardboard could get you a whole new game with hours and hours of potential enjoyment?

My second resolution is a simple one and is inspired by my son’s transaction. My primary purpose for pursuing Magic finance has been to save money for my kids’ college educations. After over a decade of this pursuit, I finally sold the majority of the value from my collection. My college fund goals haven’t been met just yet, but my progress has exceeded where I thought I would be at this stage. It’s time to shift focus a bit.

My “Magic investment” mostly consists of sealed product at this point. I intend to keep it that way. That doesn’t mean I won’t pick up some Reserved List cards here and there, especially as prices have really softened over the past few months. It just means that my primary motivation for picking up cards won’t be “to sell for profit x months from now.” I think this is a healthier mindset, and it’ll hopefully help me appreciate the game for what it is: a game.

How To Achieve My Resolutions

To maximize my chance of succeeding in my two resolutions, I need to come up with a specific action plan to turn them into reality. By getting prescriptive here, I can visualize what success will look like, motivating me to stay on track throughout the year.

Learn Enough D&D To Get Going

This is easy to do for the Dungeons & Dragons resolution. My action plan entails reading the starter manual on how to play the game and then trying some things out with my son, perhaps creating a simplified campaign just to test the waters. My first impression of D&D is that the game is highly flexible and open-ended. Therefore, even if we don’t play by the right rules, we can really do anything we want story-wise and system-wise. As long as we’re having fun, it doesn’t matter if we’re playing like everyone else. It’s a real chance to unleash my imagination, which tends to stay bottled up by impatience, greed, and day-to-day distraction.

A Threefold Plan For Shifting My Magic Focus

As for the Magic finance resolution, this will be much harder. I am programmed to think about money—I think I developed this tendency from an upbringing where money was a constant concern and we didn’t have enough resources to go around growing up. If I don’t set hard and fast rules in place, I will fall into the same patterns as the past decade. 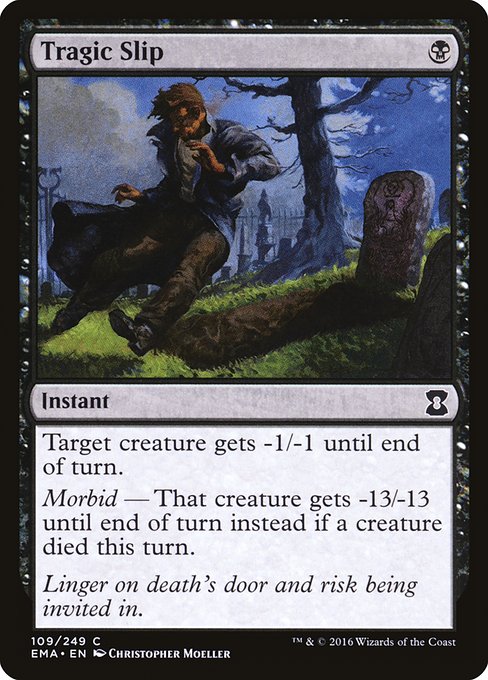 Therefore, I am going to apply three simple heuristics as prompts to stay true to this resolution.

Hopefully, these action steps will help me achieve my 2023 resolution goals and maximize my enjoyment (not financial returns) of Magic.

As you can see, Magic for me in 2023 will look quite different. This is a natural evolution after my actions in 2022—namely, selling the majority of my collection. It truly is freeing to own a more modest-valued collection, and I don’t intend to go back.

That doesn’t mean that I’ll ignore the value of cards or that I won’t try to make a little more money on the game going forward. I’m still in tune with card values (especially Old School) and will look to trade around and pick up cards here or there. It just means that financial gain won’t be my primary motivation.

In short, I’m going to do my best to let go of Magic finance a little bit in the hopes I can rehabilitate my love for the game itself. Playing more casual games with my son, learning Dungeons & Dragons, and experiencing the thrill of trading cards to my LGS are three great ways I can pursue this resolution. That I can do so with my son is yet another way this amazing hobby can be so rewarding.

Not only will it help pay for college, but it’ll also help grow a bond between a father and his son (and just maybe his daughter in another couple of years)! Where else can a game provide such fantastic rewards?