Kaladesh shook up Standard in a big way, and with the results of the Star City Games Milwaukee Open in the books it looks to be making its mark on Modern as well. Early on in the tournament we saw Jeff Hoogland crush Bant Eldrazi with a build of the new Jeskai Aggro deck, though […]

Oath of the Gatewatch significantly changed the face of Modern upon release. Even after the deck that the set spawned was hit by the ban-hammer, the Eldrazi have found a way to claw back to the top of the format. If you checked out the most recent Modern Metagame Breakdown then you no doubt noticed […]

Many years ago, Mike Flores wrote an article titled “Who’s the Beatdown?” and the theory contained within this piece has been referenced time and again for nearly two decades. If you want to be successful at competitive Magic, you have to understand how to assign your role in a given matchup. This is no less […]

I see players agonize a lot about what deck they’re supposed to be playing in Modern. I get asked questions pertaining to what’s good in Modern at the moment, though when it comes to the deck registration sheet, the biggest mistake you can make is not being familiar with the strategy you’re bringing to the […]

In my opinion, recent sets have done a great job of influencing the Modern format. The two-block model increases the need for flagship cards in individual sets, which lines up with the fact that more Standard-legal cards are making their way into Modern. Some recent additions to the format have been less welcome than others, though I […] 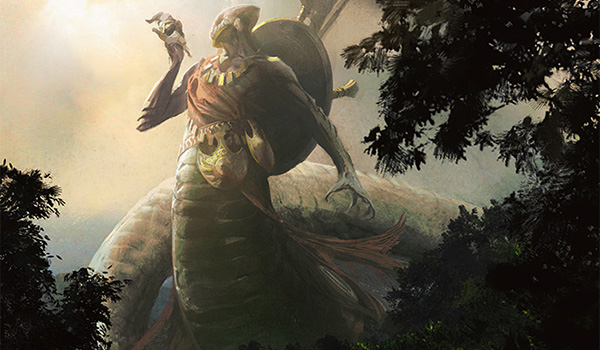 I really enjoy Modern as a format. This wasn’t always true, though I think that the format is moving in an increasingly positive direction over time. What I don’t care for is the fact that I can’t express my interest in Modern without somebody feeling the need to remind me why they think it’s a bad […]

When it comes to Delver decks in Modern, Snapcaster Mage is the most obvious second creature to feature, though over the years I’ve rounded out the threat base in a lot of different ways. Tasigur has been great for me as of late, though I’ve put Young Pyromancer, Monastery Swiftspear, and even Vedalken Shackles to […]

I get a lot of questions and comments pertaining to Grixis Delver, with a lot of the focus being on the sideboard. My sideboard notably doesn’t take advantage of the sorts of hammers that you see in many Modern decks. I’m not about “destroy all artifacts” or “exile all cards in graveyards” cards, and instead have […]

Treasure Cruise Modern was easily my favorite Modern format of all time—and my addiction to Delver of Secrets is well-documented. Given this, a lot of people have asked me about Bedlam Reveler since it was spoiled. I think it’s important to be open to the potential viability of new cards, as being the first to discover […]

Before Ancestral Vision was unbanned in Modern, it struck me as one of the more deserving cards on the list. Given the choice between playing against Jace, the Mind Sculptor in a format where tapping four mana at sorcery speed can often just leave you dead, and a Treasure Cruise analog that required an investment […]

Modern is often referred to as a “wide open” format, where deck choice is based more on preference than the “correct metagame choice.” This mentality can at times lead to poor decisions based around pet cards, favorite strategies, or simply stubbornness. It can overwhelm any player looking to prepare for tournaments without a preset idea of […]

Delver of Secrets catches a lot of flak in Modern. I’m no stranger to being teased for my deck choice, so when I was preparing for the Indianapolis Open the stigma of potentially scrubbing out with a fringe deck didn’t bother me too much. Throughout the various eras of Modern, it’s hard to say which of […]