Editor’s Note: The Twin ban remained highly controversial into 2019, especially among what I assume to be an extremely vocal minority of Modern die-hards. That sentiment pushed David to revisit Twin’s previous role in the format with a thorough, data-driven approach. Also included in this re-run are David’s thoughts headed into 2020, which deal with […]

Assumptions and collectively-held beliefs are fickle and powerful things. They can affect perception and, in a way, become reality if unchallenged. Therefore, it is critical for the skeptical mind to evaluate and investigate these ideas for validity, especially in the wake of recent bannings. After being challenged on long-held beliefs about Splinter Twin’s effect on […]

I was planning to write a general guide to beating the top decks in Modern, as alluded to last week. However, my discussion kept circling back to Death’s Shadow. Every time I talked about how various decks were constructed, it inevitably involved Shadow. The strategy discussion? Even as I described picking apart Counters Company with Lightning […] 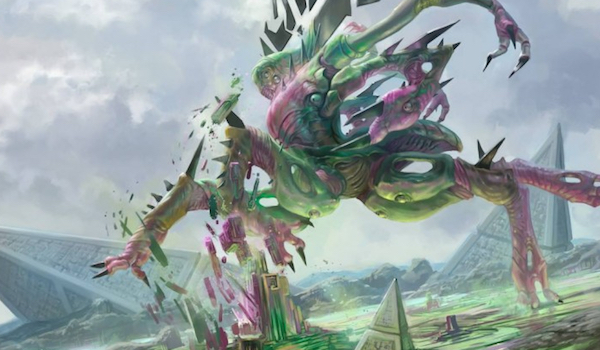 Some play Magic to win, and others play to have fun. Most players move up and down the spike scale depending on context—the casual nature of certain tournaments provides a perfect backdrop to test wacky ideas. With this principle in mind, I good-naturedly brought a neutered Eldrazi deck to FNM last week that splashed blue and green for playsets of Tarmogoyf, […]

After weeks of waiting, the time has come! Eldrazi is gone, and we could possibly be on the precipice of a Control Takeover. Before I wake from this dream, I have to do the only thing I know how: analyze! This week, we’ll briefly go over the ban announcement, the immediate impacts, and make some predictions […]

A lot happened since Monday morning. At 9:39 AM, Wizards released its April 4 banlist update. About five seconds after 9:39 AM, the Modern community went nuts. While some have criticized aspects of the update, the overwhelming majority of players responded on the scale of cautious optimism to frenzied ecstasy. Surprising no one who lived […]

On Saturday and Sunday, the Gatewatch made their last stand against the Eldrazi in three cities across the world. The Grand Prix battles were fierce. Opposition was stiff. Weeks of debate and analysis led to this point, and the Modern community rallied with the best technology and innovation in its arsenal. But in the end, the outcome […]

Welcome to week three of the Eldrazi Apocalypse! On Monday, I tried to distract us with promises of greener April pastures, but even the most indefatigable Modern optimist struggled to forget the weekend’s horrors. StarCityGames’ Louisville Classic was one of the ugliest Modern events I’ve ever seen. I described it as a “twisted, tentically nightmare” […]

Somewhere between answering comments to Monday’s article, talking Magic with my pals, and battling waves of forum doomsayers, I realized I’d yet again been lured into the ban discussion trap. Didn’t I just promise, and then re-promise, to stay clear of banlist mayhem? Darn you, Wizards and your colorless hordes! Even beyond the warped Pro […]