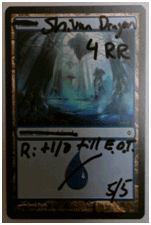 I have long been an advocate of running proxy tournaments of eternal formats to get players interested. The logic is that when they realize they like the format they will get into it and buy cards. It’s also a way for a store to attract people who play that format to the area. It’s also […]

Ryan updates us on his search for a Vintage deck to play at his upcoming local event.