The first thing I need to bring up is that today's article contains a spoiler from Modern Horizons, so if you don't want any spoilers before the set releases don't read any further. 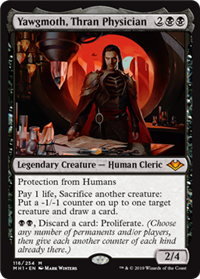 I chose to write about Yawgmoth, Thran Physician for two main reasons: he is one of Magic's greatest and longest-running villains, and because when he was spoiled a lot of our Discord chat focused on what decks he would go well into. It's that second point that inspired me most, but not for the reason you might think.

We often see two different types of price spikes when it comes to Commander cards:

Several of our fellow Insiders immediately jumped on cards like Hapatra, Vizier of Poisons because she plays extremely well with Yawgmoth, Thran Physician. However, Hapatra already caused a fair number of older cards like Harbinger of Night to jump up in value back when she was originally spoiled. 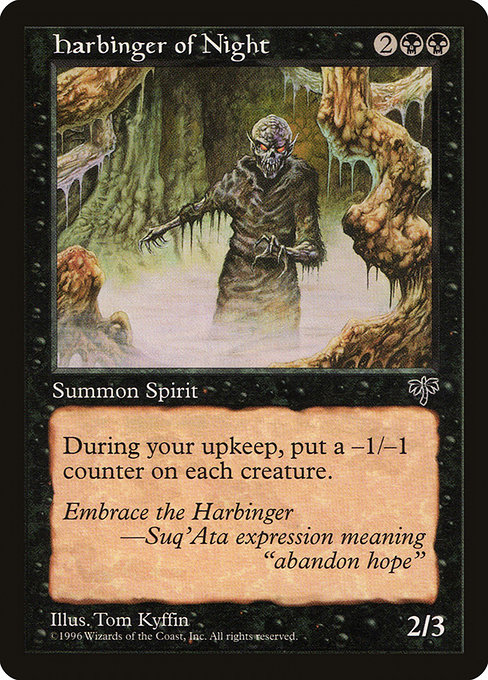 As you can see by the graph, this card's price jumped dramatically and then settled back down to about half its pre-spike price. If you invested in these with your out being buylists, you likely made very little money. This is all thanks to the fact that buylist prices lag behind spikes, which allow prices to stabilize.

So if you assume that Yawgmoth will simply be one of the 99 in other Commander decks, you may be disappointed in most specs you pick up. Commander players tend to suffer from "Tiny New Toy Syndrome" more than any other group of players, so I don't expect we'll see many gains on cards that go in decks with a different Commander.

Instead, I think it's important to look at ol' Yawggy as a powerful new Commander. He serves as a "free" sacrifice outlet, a card draw engine, and even provides one of Magic's more powerful mechanics in proliferate. His first ability is arguably more powerful, but it requires a steady stream of creatures. Yawgmoth is mono-black, barring access to white, which is typically the color that provides the most token producing cards. However, this color restriction actually opens the door to potential speculation targets.

While these cards may not be powerful enough to fit into a B/W token deck, we are required to find alternatives to the standard token staples. In fact, when you think of mono-black token Commander decks there really aren't a lot of choices. This is the best one, and also my favorite speculation target for Yawgmoth decks. 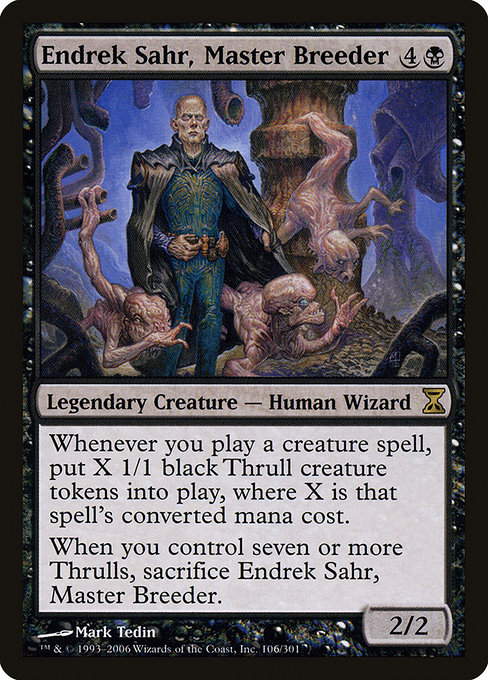 Endrek Sahr, Master Breeder is the perfect card for this style of deck. It provides continuous free token creatures to be sacrificed for profit. There are currently three printings of this card: Time Spiral, Modern Masters 2015, and Commander 2013. Only two of those have foil printings and at the time of writing, foils are in the $1.50-$2 range (full disclosure: I bought 18 foils between the two printings when this card was spoiled). The fact that you want to be casting a lot of creatures to get the additional tokens plays perfectly with Yawgmoth's ability, as they provide additional fodder. 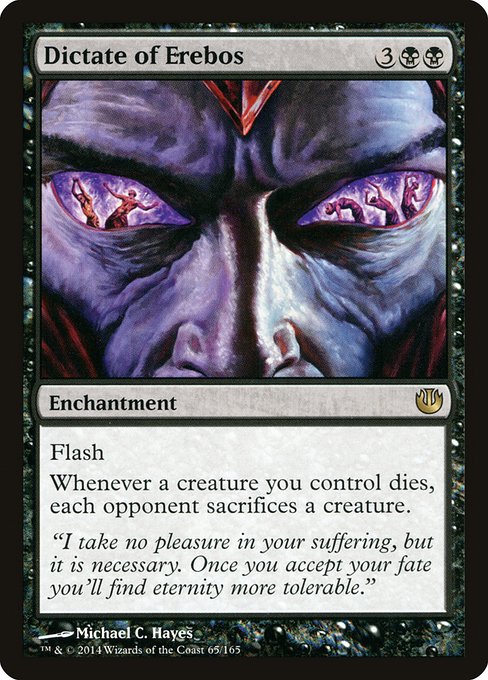 Dictate of Erebos is another mono-black staple commonly seen in B/x token decks already. Mono-black decks tend to love Grave Pact and its variants. Dictate of Erebos is the closest option we have to a second copy, and unlike Grave Pact it only has a single printing as opposed to the seven that Grave Pact has. Amazingly, foil copies of this card are barely more expensive than the regular versions, which is usually indicative of a future price increase. I was able to pick up two copies for $11.99 each when the regular versions are almost $9, making these foils seem criminally underpriced. Though it doesn't affect gameplay, the artwork on this card in foil is gorgeous. 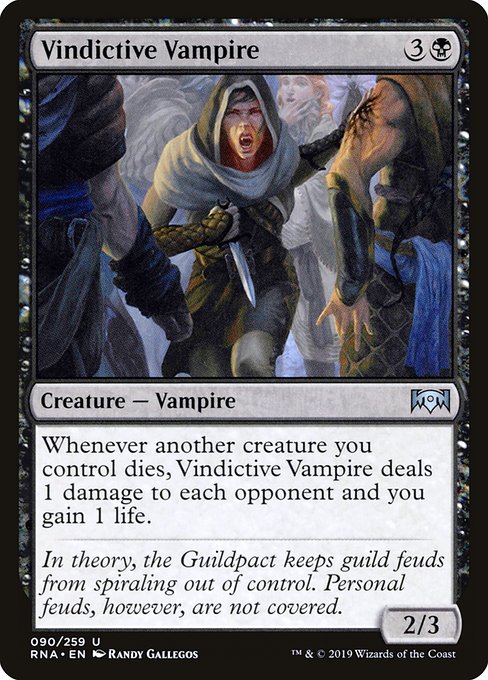 While Vindictive Vampire is only an uncommon it does seem like it's a perfect fit in this deck. Given Yawgmoth's "free" sacrifice effect still requires you to pay life, one would need a continual source of life gain. This card provides that as well as serving as a potential win condition. I don't tend to go too deep on standard legal uncommons as Commander investments, because of their extremely high supply, but the foils of this card seem very underpriced. In fact, they are so low that you currently can't buy most of them without purchasing something else from a vendor, due to the $2 minimum on TCGPlayer. 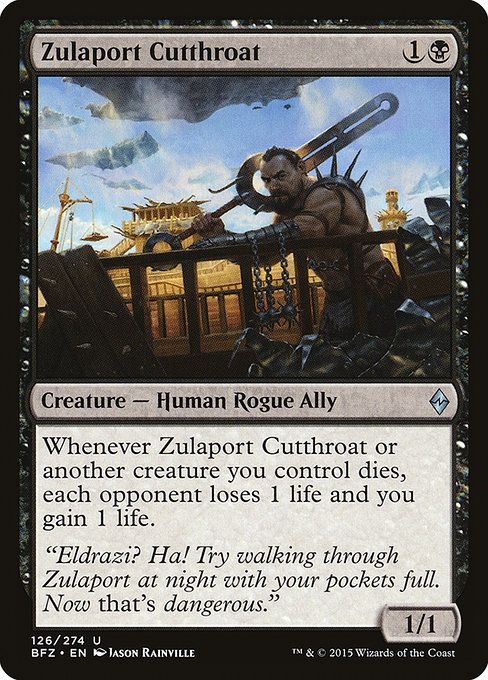 The same reasoning behind Vindictive Vampire applies to Zulaport Cutthroat, except Cutthroat was reprinted once in Masters 25. This also has a lower converted mana cost which is typically seen as a benefit. Keep in mind this card was printed in Battle for Zendikar, which was opened in record numbers due to the search for Expeditions. 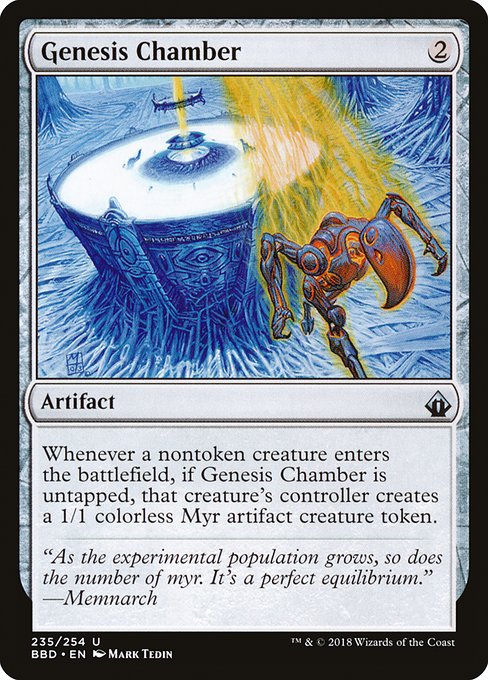 Genesis Chamber is an uncommon that was sitting at $2.50 for almost three years until was reprinted. One of the challenges I'm having in building this deck is looking for cards that continually generate tokens, ideally for free. Genesis Chamber is especially interesting, because of the fact that your opponents also benefit from it. This has usually been a major detriment. However, as Yawgmoth can continually kill those tokens for the cost of your own while netting you a card and a death trigger, the downside is mostly mitigated.

Battlebond foils are sitting under $2, making them a bit difficult to purchase en masse due to that $2 minimum purchase requirement. However, it may be worth paying a little extra, as I expect this card will likely be an auto-include in Yawgmoth decks. Especially so, when these foils could easily double or triple in price.

While many might see Yawgmoth, Thran Physician as a 1 of 99er, I think he is very likely to inspire decks to be built around him. I also believe that the cards listed above are all fairly likely to find their way into said deck and may see price increases because of that. Researching for this article showed me that there are simply not that many mono-black token Commander decks. In fact, the only one I found was the Endrek Sahr, Master Breeder decks which mainly had other cards that gave you something to do with those tokens. Yawgmoth provides that and, instead of creatures, requires as many token generators as it can get.