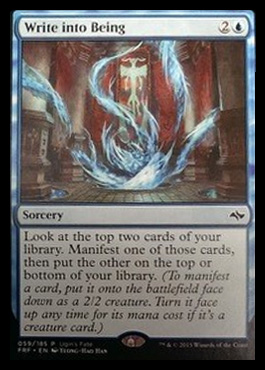 Come see all our Fate Reforged spoiler coverage This, I like. The red and green versions of this concept focus on giving us enough +1/+1 counters to justify the casting costs, essentially making the top  card of your library into a Hill Giant or whatever. This, though, gives you a Grey Ogre but it’s OK […]

I love doing my financial recaps of older sets where I mine the expensive cards, but going back further is a little harder in two ways. First, there are just so few good cards in older sets. Second, the good ones don’t often turn over, so it’s hard to establish prices. Luckily, Mirage Block was the first “modern” block and it brought in some great spells that wizards still sling today. Let’s take a walk through time as we re-acquaint ourselves with the block. Below is a list of some of the choice picks from the block; I left out the cards worth under two dollars, leaving only the prime cards on the list. There are some cards in here that I guarantee will surprise you.

As it turns out, Carlos can break Commander decks of all commons too!