I'm not happy about this.

I like spoiler season. I like staying up to see a few new cards. I like how Wizards has gotten very good at controlling the flow of information and showing us what we need to see when we need to see it so we get excited. As a financier, when there are important developments, we need time to react, and having the information disseminated over a long period gives us time to make moves.

We didn't get that the way we wanted. Instead of waking up on Christmas morning and preparing to open up all of those wrapped presents, some guy came up to us on the playground at school the first week of December and said "Santa isn't real, it's your parents and your parents didn't get you a Nintendo this year because they're worried about your grades but they did get you a new bike." That's why you shouldn't talk to strangers who approach you on the playground.

These spoilers came to use courtesy of grainy cellphone pics with a car seat visible in the background. Someone who was not supposed to get ahold of this got it and deprived all of us of more than 20% of the spoiler season experience. While the other decks aren't spoiled, some things that were anticipated to be in the decks are not and some things that are in there are clearly part of cycles. I hope if WotC finds out who did this, they "spoil" their home address.

Enough moping, we got some good stuff, so let's get into it. 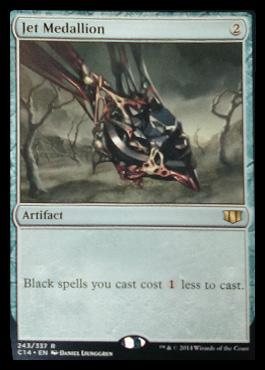 We know what this card does, but the new art would seem to indicate that there is a medallion cycle. There are other cards spoiled that are part of cycles, but I will get into those below when I post the full deck list in case you don't want to see it. I think there is a good chance that every color gets a medallion, even though they are at rare. If you're holding the old ones, don't panic. Their price is going to go down, but you won't find a ton of buyers. The old ones looks slick, and barring a foil printing which is very unlikely, the old border will be the preferred border. You're probably going to lose some money. It happens. 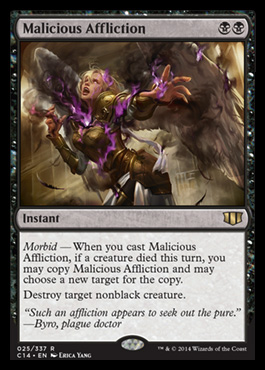 This card is very good. EDH decks are sometimes pretty light on removal, so getting multiple kill spells for one card is solid. I've played Ashes to Ashes in EDH and I'm much more keen to try and trigger morbid than I am to pay 5 life, especially since the spell still works if I can't. I don't know if this has applications in Legacy and that will hurt its upside, but I like this spell's design. 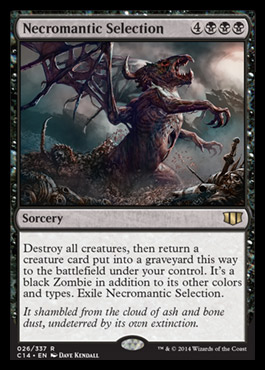 Yep. Yep, you want this card. This may be better than wraths that leave one creature alone because you can get leaves play and enters play triggers. Kokusho maybe? All I know is that 7 mana is not too expensive. Does this replace cards like In Garruk's Wake? I'm not sure, but I know this is a powerful effect albeit not a financially-relevant one. Seeing the whole deck spoiled, there won't be much pressure on this guy to make up more than $1.

Overseer of the Damned 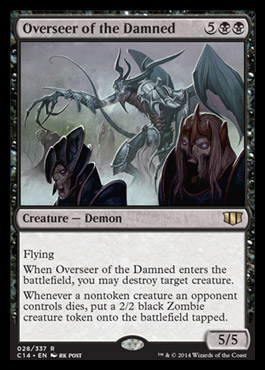 I'm not super excited about this card, but it's fine. It's got 2 good abilities and it's a demon which means Kaalia of the Vast players will give it a second look. 7 mana is a lot, but getting this for free seems good. The zombies are a non-trivial bonus to killing their dudes or letting someone do it for you and if you can recur this guy, his trigger for entering the battlefield is historically fine. Again, I don't think this has to be be worth anything for the black deck to be sick value. 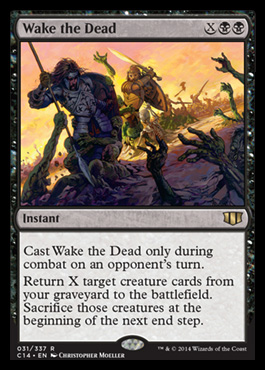 I think Sudden Spoiling is more likely to occupy the slot this card would be granted, although I'm starting to see a theme here with giving you a chance to get enters and leaves the battlefield triggers. I play Iname, Death Aspect and I'm not sure I want this, but I'll consider it. Remember, this doesn't exile the creatures, it puts them right back in the yard so it has a lot of potential utility. I don't know if it's the combat trick you need, but it may generate a ton of value and I think I want to toy with it a bit. I'm not sure whether it will be worth a ton of money, but $3-$5 isn't outside the realm of possibility. It really depends whether the bad planeswalker strands these on shelves. 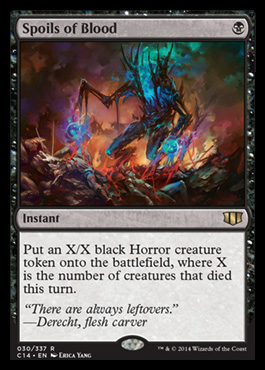 I like how costing 1 mana seems to offset how long this will sit in your hand. You have a 7 mana wrath in the deck, and this seems pretty good with that. I just don't think this card is going to see much play. It's fine, it's just not likely worthy of a slot.

Naturally some decks will love this. Saccing 30 tokens as a Prossh deck makes this a lot of value, so in certain decks you can get good value from this. I still don't see it being worth much money. 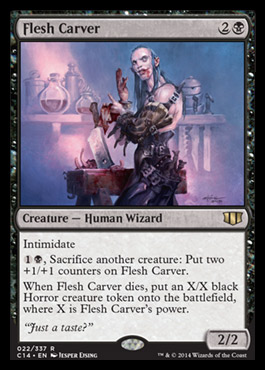 Chasm Skulker and Hooded Hydra have a friend. I don't think this is a very good friend, personally. There isn't enough upside to saccing dudes just to make your Grey Ogre bigger. There have to be bad rares, and this guy is probably one of them, 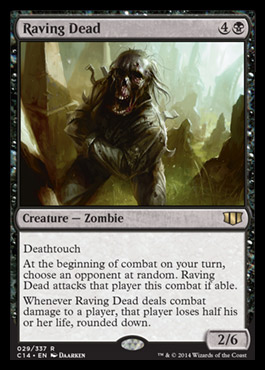 I'm not prepared to rule on this guy. Master of Cruelties he isn't, and having to attack someone randomly is just as likely to make you screw someone in bad shape when you don't want to as it is to prevent you from doing it when you do. Having a big butt is nice and the deathtouch is very nice. I'm just not 100% about this guy. It's obviously nutty if it connects, but it just seems like a really clunky card. Again, I don't think there is much pressure on this guy to be worth a ton of money, though, so it's all probably academic. 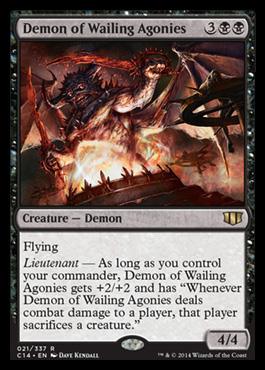 We see our second card with lieutenant. I think this one is just as weird and hard to evaluate as the other. I think this is silly in Kaalia and other demon decks and his upside when he connects is pretty significant. All in all, I think the lieutenant cycle is going to require play to really evaluate, but, financially, these should be sub $5.

If you want to see the full spoiler and my thoughts on it, scroll down. 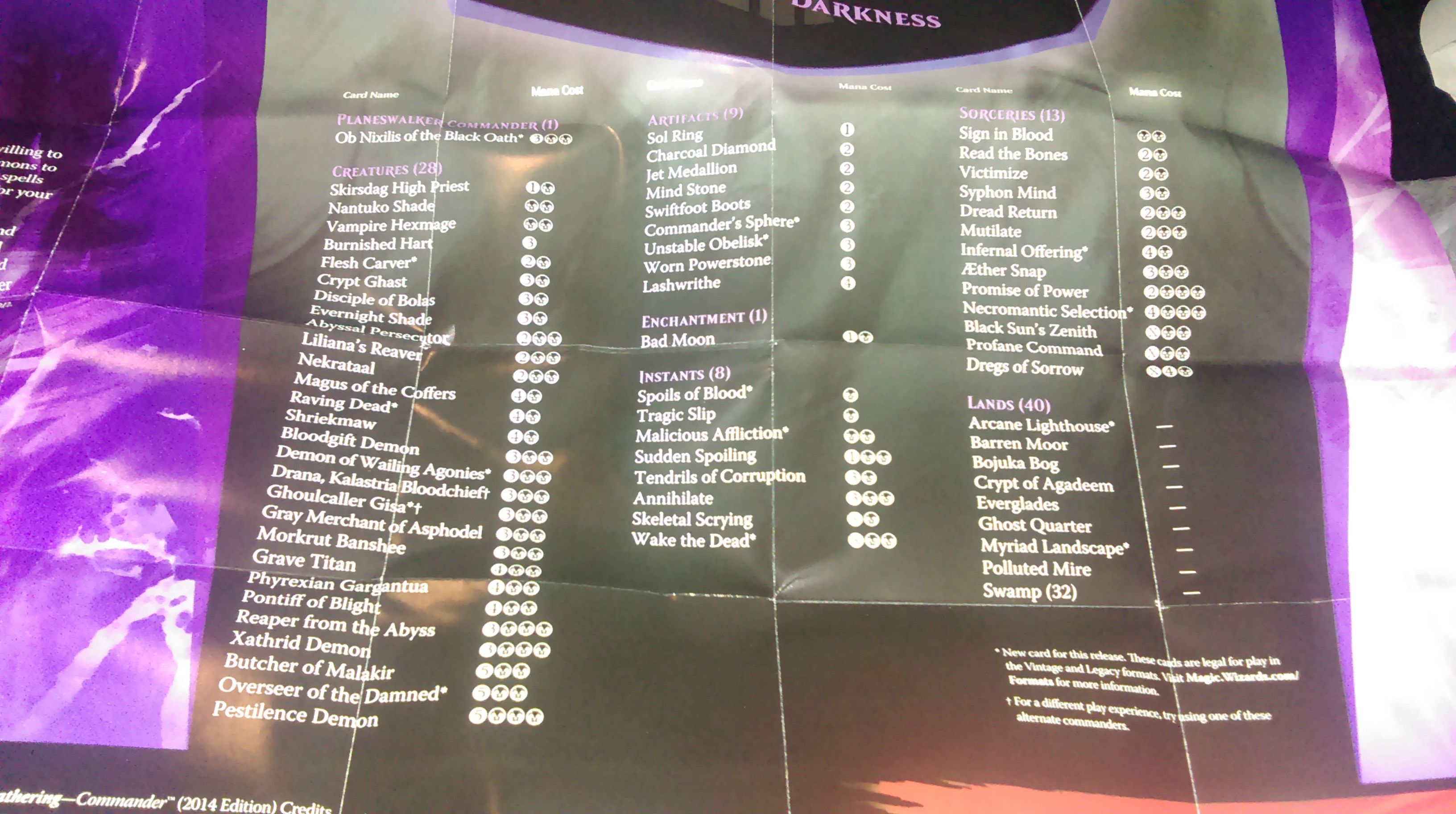 I do not think Grave Titan indicates a cycle. Prime Time is banned, and Inferno Titan was in Commander 2013 by itself. I think Grave Titan is here because you're putting stuff in and out of your 'yard a lot and Titan gives you a ton of value. I don't predict any other titans,

I don't think Profane Command indicates a cycle. Cryptic Command is worth more than this deck. I would actually be really upset if they reprint Austere Command because that card is secretly worth money.

I don't have a problem with Black Sun's Zenith being part of a cycle, frankly. The white deck seems to indicate there is some token action happening, the red deck has a Furnace of Rath that could make Red Sun's Zenith really worth it, Green Sun's Zenith being banned in modern has pulled its price in line with the rest and Blue Sun's Zenith is a cool card.

I imagine there is a cycle of medallions, as I said.

Crypt Ghast getting a reprint is a HUGE bummer. That pulls the pants off a spec of mine.

No Nykthos! In fact, the only rare land is Crypt of Agadeem. A cycle of those lands could be fine. Valakut the Molten Pinnacle is the only one worth real money. Could this be a cycle? Blue gets kind of boned if it gets Magosi, but that will teach it to be the best color in Magic, I guess.

There are a lot of mana rocks here. Worn Powerstone being reprinted here sucks. There was no need for it in a deck with so many rocks, and this will just tank the price. I am in favor of affordable cards, but I really thought Powerstone was in a good place price-wise. Tanking it sucks.

All in all, it sucks that we have to scramble right now. I wrote this at 4 AM rather than wait until tomorrow because we need to move now. This much information dumped all at once is going to make for a frantic few days for some of us, but it is what it is.

What do we think about the spoiled list? If I'm wrong, tell me below, but try not to spoil it for those who don't want it spoiled.