I play the three major digital trading card games around today: MTGO, Hearthstone, and SolForge (although to be fair, since the v4 switchover, I am more of a nominal MTGO player than an actual MTGO player. I’m very hopeful that client improvements will change that sooner rather than later). Multiplayer turn-based games like these require some form of a clock on players to ensure that games don’t just sit there with no action. Each of these three games takes a different approach to the in-game clock, but which one is best?

MTGO’s clock system gives each player 25 minutes and no additional limits on any one turn. However, if you don’t make a play within ten minutes, this results in a match loss and being dropped from the event. This can create some feel-bad moments, as Elliot Scott related on Twitter recently: 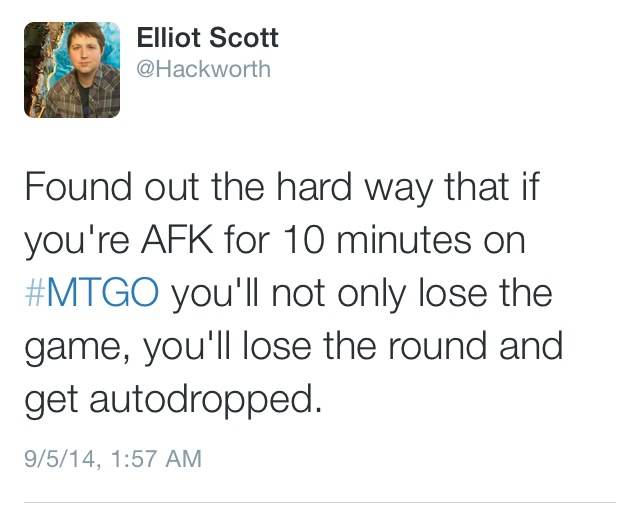 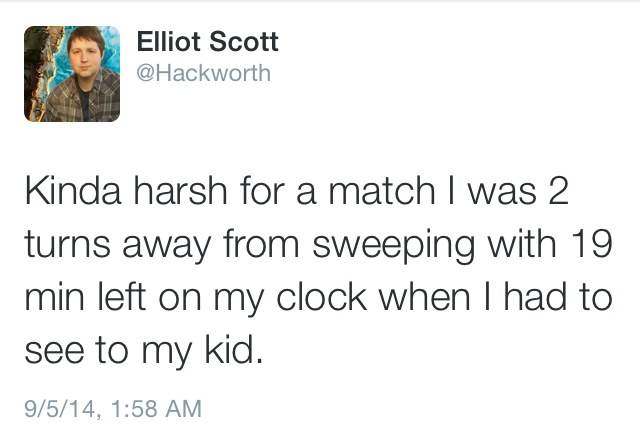 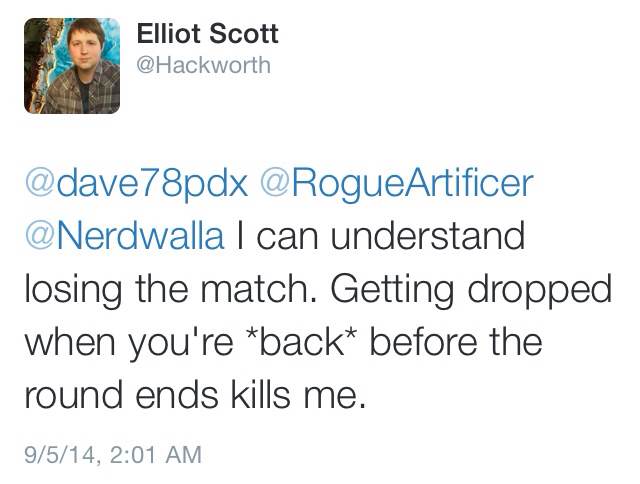 This is obviously a frustrating situation. Imagine how much more frustrating it is when the client crashes and you’re unable to reconnect within 10 minutes and lose your round. Players complain about this on Twitter constantly, so it’s not like this situation doesn’t come up all the time. Sure, you’ll get reimbursed your entry fee, but what if you were live for prizes? And what about the time you wasted?

On the other hand, without the 10-minute drop rule, salty players could go AFK and hold up tournaments every round. One of the absolute worst parts of MTGO is the long wait times between tournament matches, and not imposing time-out match losses on players would just exacerbate this problem.

Scott is right: losing the match is probably fair, but you should have the option to stay in the tournament if you make it  back before the next round starts. This seems like a simple fix, but lots of things that seem simple stay broken for years on end on MTGO, so I’m not exactly counting on a policy change, at least any time soon.

Hearthstone takes a very different approach. Each turn has a time limit of 90 seconds, which can get pretty frantic when you’re trying to think through various lines of play. In this sense, Hearthstone is more like paper Magic, except you have an automated system enforcing play speed instead of a judge. Additionally, if a player’s turn expires without any actions, the next turn will be even shorter. After a couple turns of this, the match is forfeited.

As a new dad, Hearthstone’s system is kind of frustrating. If my son needs a diaper change during the middle of the game, I’m faced with two unpleasant options: make him wait or risk missing a turn. Of course, the games don’t last super long, but when the little dude is uncomfortable, a few extra minutes can seem like a long time.

Still, Hearthstone does a great job of moving the game along, probably at least in part because it doesn’t allow double-queueing, which both MTGO and SolForge do. However, the 90-second limit can be very frustrating during pivotal turns when you really need to go into  the tank and come up with the best line of play. I’ve missed more than a few plays because I’m used to the tanking MTGO allows.

SolForge is the simplest system of all: each player gets 20 minutes on his clock. There’s no other limits besides that. The upside to this is that it places the onus on the players to manage their clocks as they see fit. The downside is when you have an opponent go AFK and you have to wait the full time before claiming your victory. It also allows for some angle-shooting where one goes AFK, waits until the clock is almost expired, and then makes a play, hoping that the opponent has gone AFK in the interim and will time out before returning.

In general, I don’t think SolForge games need so much time on the clock, and between the extra time and client features, I think players are heavily incentivized to double queue. No matter what game you’re playing, having an opponent who plays much slower than you can be absolutely tilting, so SolForge can be frustrating when you’re trying to focus on just one match and your opponent is playing several. Still, I appreciate the simplicity of the system.

I believe a combination of Hearthstone’s turn limit and MTGO’s relatively open-ended policy would be the best clock-management system. In a normal match of these games, the clock isn’t going to be a factor the vast majority of the time. The clock matters when you have an outside distraction, or a slow-playing opponent, or are double-queueing, so it really comes down to whether designers want to allow or prevent those actions.

A system that enforces timely game actions while still respecting a player’s right to carefully think through lines of play at a crucial point in a game would be great. An algorithm that takes into account cards in hand, board state, available options, and other factors could determine on a per-turn basis how much time a player gets. This would provide a healthy combination of moving the game along while not rushing players through turns. As long as a turn timer is very clearly displayed so players aren’t caught by surprise, a self-adjusting, variable turn clock could be the answer online turn-based games need.

None of these games has a perfect system yet, but the one that figures it out first is going to get a huge advantage in the DTCG market. Which clock system do you prefer?