Today I want to talk about poverty in the lands of Innistrad. In the Isolated Chapels and the Hinterland Harbors, land values have hit rock bottom. Rooms at the Clifftop Retreat are empty. And as a prospector eager to develop, I am wondering if right now is a good time to buy in.

The best clue I found for considering whether or not Innistrad land values will rise was Sulfur Falls. 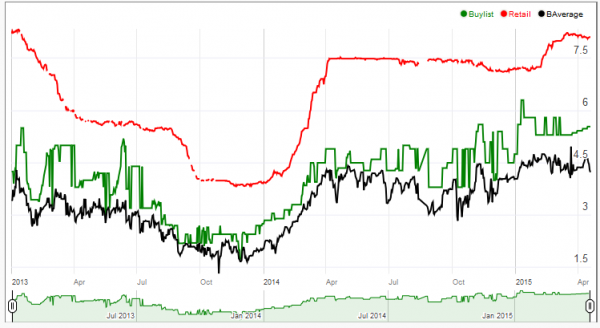 The stock chart reveals that Sulfur Falls steadily climbed this time last year and yet again last quarter. Each of these climbs correspond to the opening of Modern season. The card is readily seen in several Top 8 decks at the state level including Splinter Twin. Unlike scry lands, (Temple of Malady, Temple of Enlightenment, etc.) these lands actually see Modern play, which will be a huge factor in predicting their upward value.

But not all of them will be worth buying into. Sulfur Falls for instance has probably hit its ceiling. If last year can be a predecessor of this year, it will quit climbing and level off this summer.

Instead, let’s turn our attention to the lands below poverty. Turns out the poverty line in the United States for a single individual is an income of less then $11,945 a year. In Innistrad, I’d fix the poverty line at about 4 dollars/per land (you could extend this metaphor to other dual lands; the target price for shocklands is $10).

Any card below poverty would rise to at least $4 by virtue of seeing Standard play again. Meanwhile, it would bring down any land above it. So my keener interest is in real estate below poverty; the ghettos. In Innistrad that would be Isolated Chapel. To me, with or without a reprint, its only direction will be up.

Just at the poverty threshold, Hinterland Harbor, Clifftop Retreat, and Woodland Cemetery make for riskier–but fair–investments. Like Sulfur Falls, Hinterland fixes the land base of several Top 8 Modern decks. Woodland Cemetery too, although at a lesser degree. In terms of their stock chart, they have all leveled off and show little movement. But they’re not losing value either.

If you can snag these up for less then $4, I’d do so. Just by considering their stock in context, I figure by this time next year they have a chance of gaining some moderate value. The only ‘risk’ being that any value they would have gained could be lost by a reprint.

As a final thought, the time is coming very near to cash in on scry lands. There’s going to be a vacancy for dual lands in the rotation. Obviously everyone hopes for off-color fetch lands. But it could very well be a reprint of off-color Innistrad lands instead.

At their height, these lands saw values upwards of $13. And although I have been rather conservative in my estimates (I could have set the poverty line at $5 or even $6), I predict if there is a reprint, good money can be made off these lands. Some thoughts to consider, my friends, while deciding whether or not its worth it to take the chance/risk to invest in Innistrad lands. 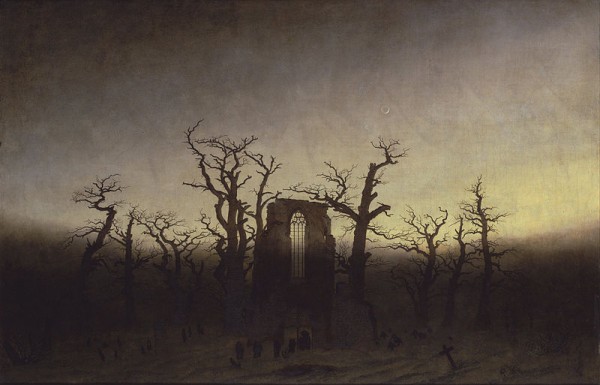 Casper David Friedrich painted his own Isolated Chapel, “Abby in the Oakwood,” in 1810.