Hey everybody, and welcome back to Whinston’s Whisdom. Let me start by addressing the comments from last week’s article. Having gone back and reread my article in response to the comments, I have to say I wholeheartedly agree with them. There was too much “here’s what I did” and not enough “here’s why/how I did it”. The article just didn’t have enough useful information to be taken from it. And so I’ve decided to stop doing articles solely composed of trades and return to my standard article format, where the only trades listed out will be my Pack to Power, and these will have FULL reasoning accompanying them. Hopefully this leads to a more enjoyable read for everyone.

With that said, today I’d like to cover the results from States, and how these have affected the prices of cards within the Standard metagame, and then go over some MTGO specific information. Finally, I’ll round it off with some Pack to Power.

So what did States give us? From my point of view, it gave us several relevant insights into the current and future Standard format. The first of these is the almost universal failure of Argentum Armor based decks (one of which I was unfortunately playing). Why did they not perform as expected? The Argentum Armor decks are very soft to removal, and are ridiculously underpowered without the Armor itself. When compared to decks like Valakut or Blue-White, Argentum Armor based archetypes can’t keep up. While this doesn’t affect prices overly much since Argentum Armor decks are relatively cheap, I wouldn’t be picking up anymore Stoneforge Mystics. Another deck that underperformed was Elves. This, however, is a much more expensive deck than Argentum Armor. I would be quick about trading off any Eldrazi Monuments, Fauna Shamans, and Vengevines you might have lying around. Because of the deck’s poor matchups against the top contenders in the field, and some inconsistent draws (much like White Weenie), I can’t see Elves dominating the metagame any time soon.

Now for the gainers, the two key cards we want to be looking at are Primeval Titan and Jace, the Mind Sculptor. The Primeval Titan decks, Eldrazi Ramp and Valakut, performed extremely well at States. They beat down on Control all day long, and Valakut’s Pyroclasms kept Aggro at bay (though Eldrazi Ramp didn’t have the same advantage). Primeval Titan has shot up 35% on MTGO in the past week (from 30 to 43 or so), and I foresee the paper versions doing the same. For those of you with smaller budgets, the support cards in each deck should be seeing increases too, especiallyWurmcoil Engine, which sees play in both decks.

And we also have Jace based decks. The most popular of these by far is Blue-White Control. Blue White performed well at States because of it’s good matchup versus other random control decks, an unexpected blowout of a matchup against Red, and the ability to crush whatever rogue concoctions it might have to play against in the early rounds. While Jace is the namesake card, I wouldn’t be picking any up. Like Baneslayer Ange;, I feel Jace has mainly leveled out, and while it is still the game-breaker in the mirror, it is significantly less good against other archetypes. Instead, I would recommend speculating on Blue-White’s finishers. At the moment, the ideal finishers for Blue-White are undecided. Some versions run Sun Titan and some Wurmcoil Engine. Almost universally though, Baneslayer has been disappearing. Another option that has only recently come into the fray is Frost Titan. We’ll talk more about him later. The final Jace deck is U/R control. Backed by Gerry Thompson, his list of U/R Destructive Force control took down Illinois States in the hands of the ever-powerful Lee Cote as last year’s State Champion Aron Bloch wept on the sidelines (hi Aron!). Again, the main card I would be looking at out of U/R is Frost Titan.

While originally regarded as the worst of the Titans, Frost Titan is becoming the new breakout card. Already up over 100% on MTGO, this is a train you should get on as quickly as possible, assuming, of course, that you haven’t already missed it. Frost Titan is so powerful for several reasons. First, it acts as a perfect foil to opposing titans of any variety. While it doesn’t stop the comes-into-play trigger, it does prevent any triggers in the future. It can also lock down any other troubling permanents, such as Manlands, a Wurmcoil Engine, or even mana screw your opponent. While Frosty the Snowman’s conditional Shroud may seem relatively useless, I can assure you it’s not. While it is most important in Control mirrors, where the extra 2 mana for a Doom Blade can lead to a Mana Leak suddenly becoming live, I guarantee you multiple opponents will simply forget about the ability. I’ve had Valakut tap out for Primeval Titan, search up 2 Mountains with a Valakut already on the table, and then *faceàpalm*. As a whole, Frost Titan is an excellent card, and one well worth playing.

Now, our MTGO segment for our digital fan base. As I write, Scars prereleases are in full swing, with Drafts starting in just a few hours. This is one of the few times I would have recommended playing in Prereleases, first because of the very skill-dependant level of the format, and also because of the amazing promo. Some explanation. One of the things I like best about Scars Limited is the low impact of the bombs. True, cards like Hoard-Smelter Dragon, Myr Battlesphere, and Mimic Vat will still win games. But there are so many answers for these cards at the common level in Arrest and Shatter among others that bombs shouldn’t singlehandedly determine the outcome of a game. I went an easy 3-0 split with a R/W aggressive Metalcraft deck with only Strata Scythe as a rare, while my G/B Platinum Emperion, Skin Render, Geth, Lord of the Vault, Myr Battlesphere, Mimic Vat pool went 2-2, as did my Wurmcoil Engine, 2x Skin Render, 2x Grasp of Darkness 2x Galvanic Blast pool. Skill level and tight play are huge! Also, the promo for this prerelease is amazing. I’m very happy receiving one or two Wurmcoil Engines every time I play a Sealed queue. These guys are already going for 3 tix (for non foil) or 4 (for foil) in the classifieds. This also means that you don’t need to worry about holding onto any Engines you open (I’ve already gotten 2) and instead can just swap them for tix immediately. The only downside to this I can see is warping the MTGO market-worth of a key card, but even that shouldn’t be a huge deal. Another factor you should be looking at when investing in MTGO are the Eternal formats. Prior to the release of Scars, prices on Eternal staples were steadily creeping upwards, 5-10% per week. In my opinion this was largely due to an increasing apathy and boredom in regards to the Jund and Mythic dominated Standard metagame. Now that those decks are gone, and Scars has joined the party, I feel more people will switch back to Standard. As such, I would let go of any Eternal investments you have, and look to pick them back up later once Scars as sunk in and people start getting bored again.

And last, but not least, we’ll round out today’s article with some Pack to Power trades: 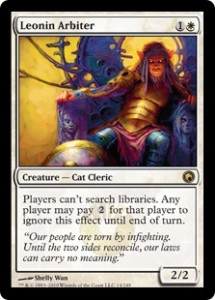 This felt like a quite easy swap for me. As I said earlier, I don’t feel Stoneforge Mystic is still a good hold any more, while Leonin Arbiter is seeing plenty of Sideboard play both in aggressive and control decks against Primeval Titan. I should be able to move these pretty easily to a prospective Blue-White player.

Well, there goes one of the Arbiters! Here, I traded off some control cards for a more varied trade stock. Some pimp Ramp pilot is going to want that Foil Eldrazi Temple, and Goblin Guide is a perennial favorite for the Red mage. Necrotic Ooze is the only one I might have trouble trading away. The BG Dredgevine deck with Fauna Shaman and Ooze didn’t make a very large appearance at States, but I still feel I can use the Ooze as a throw-in at least.

As a recap, the pack’s current contents:

That’s all for this week. Let me know in the comments section if this article was an improvement on the last, and what further changes I can make in order to improve these even more.

Wishing he was allowed to do the Great Designer Search #2,