Whinston’s Whisdom returns with another installment for your every financial need! This week, I’ll do a quick rundown of some hot cards, as well as talk about pricing altered art cards.

(In my best newscaster voice)

While there aren’t too many cards to discuss today, the most important is Ranger of Eos. With every financial writer in existence recommending that their readers pick him up on MTGO, the price has more than double to 1.7 tickets apiece on MTGO. The train is well past on this, and I wouldn’t recommend buying into the hype. Other extended staples also saw similar gains, with Knight of the Reliquary jumping by about 30%, yet other cards in this category, such as Noble Hierarch and Path to Exile haven’t seen the same amount of increase, so that’s an option that is left to the reader to fully explore.

In other news, the complete spoiler of Masters Edition 4 was released, showing that the duallands are being reprinted. As such, sell yours now if you can still get a good price for them, but if not, hold onto them. Some other legacy and vintage staples are also present in the set, such as Sinkhole, Manabond, Channel, and others. Though Null Rod did spike before the full spoiler, most likely fueled by those speculating that the power 9 would be included in the set, I don’t see that price jump lasting for too long.

Looking into the world of Standard, Sword of Body and Mind has been rising, in response to GerryT’s article about Boros with Squadron Hawks. Having played Boros online, with a list very close to Gerry’s for over a month, I can tell you that the deck is quite good, especially for those unable to afford big papa Jace. Sword of Body and Mind plays a key role in the deck, allowing you to swing past Avenger of Zendikar and Friends, Primeval Titan, Sea Gate Oracle, Frost Titan, and Llanowar Elves, generating additional creatures in the process. The only time the milling has ever been relevant for me was against Dredgevine, where I was able to deck him in 3 hits. Other Scars of Mirrodin cards have not been so fortunate, with the majority of them slipping over the past week. Tunnel Ignus lost a third of its value, Darkslick Shores and Mimic Vat both fell by about 22% and the mythics Koth and Molten-Tail Masticore both continued their downward trajectory.

with the preliminaries taken care of, let’s move on to talking about a topic that’s relatively new for me: card alters.

Card alters consist of ordinary players, and sometimes official Magic artists, painting over cards to change their art, in several different ways. This, obviously, affects the card’s value. In today’s article, I’ll break down card alters into some distinct categories, and attempt to define the influence each category has on price. 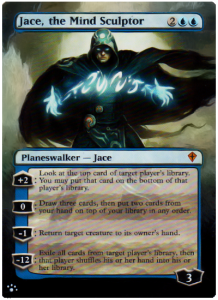 These alters are minimal. Often doing nothing more than expanding the card’s art over the card’s borders, they don’t interfere at all with the original work. I personally enjoy these simple alters, because of the way they remain true to the artist’s original vision, and don’t try and shift the focus in another way entirely. As a rule, these basic card alters will increase the price of a card, while not being too hard to trade away. Though most competitive players won’t have a use for them, serious Eternal and EDH players always want more. The only caveat is to insure that the alter is of a good quality, which is especially difficult when buying over Ebay. I bought around 5 alters on Ebay recently for my own personal decks, but unfortunately one was of such poor craftsmanship and artistic skill that I was forced to trade away. (Editor's note: Card Kitty, the website that provided the pics, was not the one who sold the cards to Noah) Just because it’s different, doesn’t mean it’s better. Learn to look at alters with a critical eye.

I define shifted alters as alters that take the focus of the piece in an entirely new direction. Whether it’s an overabundance of flowers on a Birds of Paradise or a shield-wall on a Wrath of God, these alters stem from a player trying to create their own work of art in place of that of the artist. Again, from my own personal opinion, I am very against these. If you want to paint Magic cards, get yourself some blank cardstock and paint, but don’t corrupt an artist’s produced image just because you want to express your own creativity. If your reasons are less noble than that, than it only goes for you more strongly. 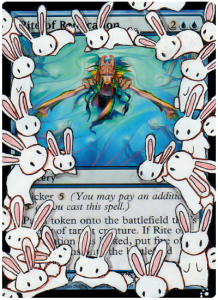 Alterations to a card done by Magic celebrities, be they pros, designers or artists. Here, the quality of the alter is less important than ever. As long as there is a notable difference on the card and it is signed by the celebrity, this should trade higher than normal card, not only because it appeals to the collector, but the Pro Tour fanboy as well.

My least favorite type of alter, these alters take an existing work and turn it into a parody, painting it over with a culture symbol. I’ve seen Darth Vader Vampiric Tutors, and I’ve seen Superman Force of Wills. Each and every one of them is a travesty. Magic cards are works of art, not jokes. Ordinary men and women slave over these paintings to make the game more enjoyable for YOU. Even with shifted alters, at least part of the original work remains. But with parody alters, the author’s work can’t even be seen anymore, and while the pose or placement of the figures may be iconic, the work is no longer representative of the original artist, and instead mocks the hard work the artist put into it. Because of this personal feeling, I will never buy, trade, sell, or pick up a parody proxy, but others certainly see this issue in a more moderate light. While I don’t intend to force my views upon you, I just felt that it was important to share how I felt about these alters, and the 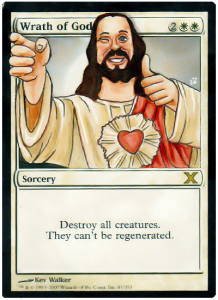 practice of altering as a whole.

And that just about wraps up alters and their many variations. Whether buying, selling, or just enjoying some beautiful artistic work, alters are great for everyone. I’ll be back next week with some more financial knowledge, but don’t have a specific topic planned, so if you’d like me to cover anything, let me know in the comments.

84 thoughts on “A Tale of Card Alters”