Last Thursday WotC announced that they would be getting a bit more involved in EDH. If you haven't already read about it the main article can be found here. I'm very excited about a number of these changes but especially the printing of new generals. When I first started playing EDH my first decks were mono-colored because they had easier mana bases to acquire. My first serious deck was a Teysa deck and at that point I had a mono-black deck as well. I figured the next step would be to build a three color deck and I wanted to start picking up some of the staples from the other three colors so I figured a URG deck would be the best way to go.

I was pretty upset when I found out that the only legend in those colors was Intet. I'm not a fan of using a general that doesn't have a ton of synergy with the rest of my deck and there didn't seem to be many exciting ways to build Teneb so I moved on to a Momir Vig deck instead.

Fortunately WotC is going to be filling in some of these holes. As a player this is what has me most excited but there is some opportunity here for trading as well. I'm sure I wasn't the only person who held off on building a URG deck until a better general was released. The same is true for other color combinations. Right now it is hard to speculate exactly what will be good since we don't know the generals but I would try to pick up some bulk cards in those wedges as throw-ins and just hold them until the decklists are released.

Kelly Reid recently wrote an article http://www.mananation.com/edh-future/ where he talked about why he thought EDH was more than just a fad. When I first read it I thought that the article was written a bit late since every big event I've attended for awhile has been filled with people playing EDH. On the larger scale this is true but then I thought about the times I've gone to smaller stores and no one had an EDH deck.

At my school there was no one, to the best of my knowledge, who had an EDH deck until the beginning of the last spring semester. I started bringing some around and slowly other people saw how much fun the format was and began to build their own decks. Of course this created an entirely new market for me since I was able to move EDH staples much easier than I had in the past.

Some of these new players just weren't aware of the format or only had a vague understanding of it but for the majority they knew what it was but didn't want to invest the time and money into a deck they may not even get to use that often. This is understandable and the new premade decks are going to make this format explode in popularity. There will be new EDH communities sprouting up all over the place as new players experience the fun that can occur in EDH.

Once players have the opportunity to actually play with others the only thing holding them back will be the perception that you need to spend a lot of money to have a good EDH deck. This is far from being true for a number of reasons. Sure you can spend a ton of money building a five-color EDH deck with all the duals, Mana Drain, etc. but most decks don't really need the expensive cards to function. EDH decks are filled with bulk rares.

In multi-player games having the most powerful deck isn't a guarantee that you will win and may actually make it more difficult since other players may gang up on you. If the premade decks are decent, as I expect them to be, there is no 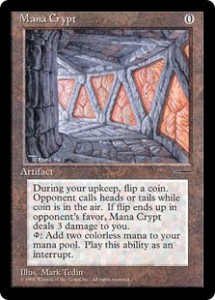 telling how popular these products will be. Some of the biggest problems that hurt other premade decks just aren't existent in EDH. The consistency that is lost by not including multiples of the better cards, for example, really hurt the playability of the usual premades but obviously that isn't a problem here. Many of the most powerful cards in EDH are off the reserved list and relatively cheap since they see no play in competitive formats. I don't really see a reason why they can't make these decks great starting points.

Of course they won't be as finely tuned as they can be and the cards Wizards leaves off are the cards you will want to have in your binder. These decks won't be coming out until the summer so it may be some time before we get decklists but as soon as they are out we need to pour over them and figure out what they are missing so we can make some gains off of them.

The biggest area that I'm currently considering is the mana-fixing. What options are they going to give us. Obviously the Revised duals won't be in them but will the Ravnica shock lands? I doubt it but it isn't impossible. Still, with the recent printing of the Zendikar fetch lands the shocks become essential in multi-color EDH decks. If they aren't included, and my gut feeling is that they won't be, then the demand for them will rise so I feel that picking them up now might be a good choice.

On the other hand I have a good feeling that cards like Solemn Simulacrum will be included. I would trade those away. Coalition Relic is another EDH mana-fixer that I bet will be included but they have already reprinted that in other multiplayer releases so that shouldn't affect it much. While they don't fix your mana, both Mana Vault and Mana Crypt are great in EDH decks and possible candidates for inclusion. Mana Vault is already pretty cheap but the Crypt is another story. To be honest I wouldn't be surprised if it was included but I also wouldn't be surprised if it wasn't. The best way to handle this type of a situation would probably be to hold off on picking any of them up unless the deal was good enough to mititgate the risk. If they aren't reprinted the price will probably go up a bit because there should be a little more demand for it but I don't think it would be significant enough to want to invest in them. On the other hand if does get reprinted...

Next week I plan on talking about Extended since we will have some results from Worlds. I'm also going to start using my Twitter account to actually tweet instead of just reading the tweets of others. There have been a number of occasions I thought about something during the week that doesn't make it into my article and I think may be worth tweeting about. Follow me @mattsedlak. Also I want to give a random shoutout to my friend Derek who made his first PTQ top 8 this weekend. What does everyone think about the EDH announcement from last week? Its nice to see Wizards make good decisions from time to time!