In our time at Ertai's Lament we've reviewed dozens of preconstructed decks (and we're only getting started)! However there is the common rail against the critic: it is easier to tear down than it is to build up. There is truth in this, of course, and while we won't be building any preconstructed decks today at Quiet Speculation I can at least offer some thoughts on what separates the good from the bad. And rather than take the half-empty perspective, let's keep things upbeat and discuss what characteristics make up a good preconstructed deck. They certainly exist and we all have our favourites.

And so, here are five characteristics that I have identified as being vital to a successful preconstructed deck.

Note that when I say 'successful' I don't necessarily mean competitive. While few would argue that winning isn't an important component of fun, it is far from "the only thing." How a deck plays out–the experience of piloting it, win or lose–warrants just as much consideration. I've had a blast losing with a fantastic precon just as I've been bored to tears grinding out a win with a lousy one. Few decks will get the highest of marks in each of these, but ones that score well in each are ones to be enjoyed again and again. 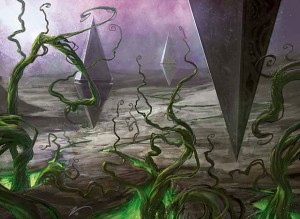 This is one of the very first things I look for when assessing a preconstructed deck for the first time, and it can reveal a great deal about how the deck wants to be operated, as well as what resources it needs. A high concentration of cheap cards is generally looking to overwhelm an opponent early. These are decks like Rise of the Vampires from Zendikar, or to draw from the current set, Myr of Mirrodin. Fast, aggressive decks are optimized when they explode out of the gate but they face two overlapping challenges in their march towards victory.

First, their creatures get outclassed quickly. This makes sense. If most of what you have is cheap, the other player with the midrange deck will eventually start landing larger critters. The second problem is that the red zone becomes congested. Once things begin to bog down in the middle, your attack begins to lose its steam. Both of these problems tend to be exacerbated the longer the game goes on.

The answer? Removal. There are other answers, of course, but the most rock steady of them all is either good burn (Lightning Bolt, Galvanic Blast) or good kill (Doom Blade, Smother).

On the other end of the spectrum are the tail-heavy decks: those decks with a substantial quantity of expensive cards. An example of this might be Eldrazi Arisen, which packs in a several of the namesake beaters with equally gargantuan price tags, or Magic 2011's Stampede of Beasts. These decks tend to surrender the early game in exchange for increased power later on, stuffing the deck with high-power creatures and effects. The problems faced by this deck are quite different: namely, how can you ensure you'll land your power cards before dying to a faster deck?

For these decks mana ramping becomes critical. Harrow, Growth Spasm, or Llanowar Elves are examples of ways to get the mana you need faster than just playing a land each turn and for decks such as these that is critical.

There are other perils that come with tilting the scale too far in one direction or another. All the ramp in the world won't change the fact that if your opening grip includes three creatures that cost six mana you've effectively mulliganed yourself and may hurt your chances at victory. A common susceptibility of decks filled with cheap cards is that you run out of things to do. If each of your cards has only a minor effect on the game, and you rely on getting a bunch of them out fast to overwhelm your foe, you might well run out of steam and look for answers from the top of your deck.

Good preconstructed decks have a well-considered mana curve that doesn't hobble your chances out of the gate by having too high a probability of bad draws. 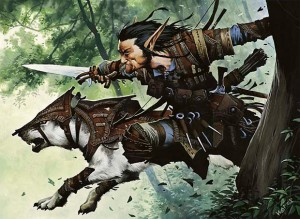 There's a common practice amongst those engaged in sales called "the elevator pitch." Imagine you're a salesman for some widget company. You're out cold calling, prospecting for business, and you find yourself alone on the elevator with the CEO of the company you're trying to sell to. The doors close and you've got one minute of this person's time to make your pitch. What do you say?

The same tack can be taken with a Magic deck. Pretend you have 30 seconds to answer the question "How does your deck win?" Could you answer beyond the generic "With creatures and spells." Let's look to some recent decks for examples.

Invading Spawn (Rise of the Eldrazi): Filled with expensive creatures, it uses Eldrazi Spawn-generating spells and creatures to ramp into huge beaters in the midgame, and dominate the battlefield.

The Adventurers (Zendikar): Using the Allies mechanic to keep weenie creatures relevant throughout the game while getting in through to your opponent for lethal on the back of a creature swarm and burn spells to clear the way.

In short, if you can't come up with an "elevator pitch" for a deck it likely doesn't have a coherent strategy (and there are more than a few decks that seem like a pile of mediocre cards thrown together). 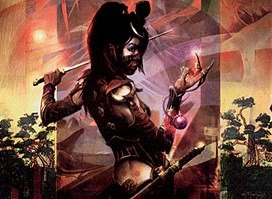 A Sense of Identity

What makes tribal decks so popular? Why do people put so much time and effort into their Commander (EDH) creations? Simple: many people like their decks to convey a sense of theme. This goes beyond strategy and moves into where you find mention of such elements as style and "fun." These decks have both a sense of themselves and what they are trying to illustrate.

One of the primary purposes of intro decks is to serve as a showcase for a particular set. Zendikar's set of decks were, by and large, failures from this perspective for two reasons. First, they almost completely ignored some of the central themes of the "Adventure World" setting, such as traps and quests. Secondly, they had a huge Magic 2010 component. Core sets, by design, tend to be worldless. There's no real 'story' that the cards are set in or that plays itself across the face of the cards. A full 33% of nonland cards in Zendikar's intro decks were from M10.

Scars of Mirrodin's M11 content? About 9%. Consequently, the Scars decks are much more evocative of the world within which they are set, and all major Scars mechanics have their day in the sun.

Other decks that have had this strong sense of identity include Izzet Gizmometry from Guildpact, the delightfully complex Suspended Sentence from Future Sight, and Betrayers of Kamigawa's Ninjutsu. 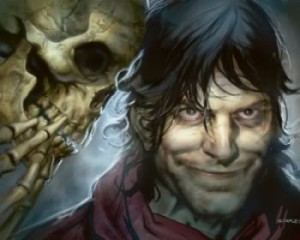 This one's obvious: all the luck and good intentions in the world won't make a deck full of vanilla creatures any fun to play, no matter how it manages on the battlefield. Understanding that a deck is often only as good as the support it brings to its win condition is a leap that all nascent deck designers take at some point in their careers (should they wish any kind of career at all). We touched upon some of this in the section above about mana curves: decks with high curves need rampand swarm decks demand a robust removal suite. But of course, there are other kinds of problems as well.

In designing a set with a substantial proportion of artifacts, the designers for the Scars of Mirrodin decks decided that they actually needed an answer to the problem such a design contained. Why not make a deck not just including, but optimising for artifact removal? Thus Relic Breaker was born, and within it lurk Molder Beasts, Oxidda Scrapmelters, Viridian Revels and more. Of course, the caveat here is that Relic Breaker is a deck that could thrive only within such an artificial world because most decks don't contain enough relics for the deck to be profitable playing.

In general, when assessing a deck and reviewing its card selection you must ask "What problems might this deck face and what are its answers to them?" If its only answer is a pair of Lightning Bolts you're unlikely to get very far. Successful intro decks have the ability to deal with the threats they are likely to face. For faster decks, which look to turn every expensive card in your deck into a dead draw, these are most often creatures. For other decksthey could range from removal to ramp to ways to tutor out your critical cards. For an example of the latter case, we need look no further than Magic 2011's Reign of Vampirism, which realised that getting out the Captivating Vampire was so critical for the deck's win condition that it made sure to include a pair of Diabolic Tutors, two Rise from the Graves (double the normal allotment for a Black precon) and even a singleton Nature's Spiral, the latter cards in case he met an untimely demise. 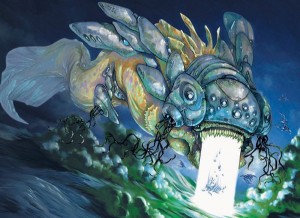 Lastly, do the cards in the deck play well with the other cards assembled? Obviousl, a mechanic like Ally ensures that The Adventurers oozes synergies but that’s baked in at the card design level and as examples go a bit too low-hanging a fruit. Let's turn instead to 2009 and Planechase's Metallic Dreams, an artifact-centric construction and superb example of synergy.

The impressive characteristic of Metallic Dreams was in the number of different ways the deck gave you to win. It packed in a number of brutes as closers, such as Qumulox and Broodstar, but if you didn't draw into them there was no need for panic. The deck also had Bosh, Iron Golem who could transform some of the artifacts you spent all game assembling into direct damage. No Bosh? No worries. Instead of sacrificing them, keep your army of tinkertoys and drop a Darksteel Forge instead, turning the tide at a stroke by making them indestructible. And if you feel truly adventurous, there's always the Door to Nothingness.

Four disparate win conditions bound together by one common theme: they are enabled by all the other artifacts you've deployed. This degree of synergy lets you develop normally throughout the game then tailor your endgame based upon which of these you've assembled. This humble little "casual" offering remains a masterpiece of modern preconstructed synergy.

Tying it all Together

Ever since the first preconstructed decks were released for Tempest they have been a popular, enduring, but much-derided medium. In recent years Wizards of the Coast has concocted more and more ways to sell you a deck of sixty cards, including the Duel Decks, the Summer-release casual sets (such as Archenemy), and even the recent Duels of the Planeswalkers offerings. There are a number of promising signs that the product as a whole is improving (as we've seen in the Scars of Mirrodin decks, though that's a topic for a different time). The precon isn't going away and so long as the standouts continue to blend these five elements I've highlighted they will continue to be an enjoyable part of the Magic experience.

So what are some of the best precon decks that you have played, and what elements made them so memorable? I'd love to hear it!

76 thoughts on “Five Elements of the Best Precon Decks”