Welcome to the first installment of Magic Beyond the Box, the series on Quiet Speculation dedicated to preconstructed Magic, the principles of the game and the terrain where the two intersect. In the weeks ahead we’ll be exploring how the intro packs and other out-of-the-box decks serve to illustrate the fundamentals and theories of the game as well as how you can improve your game through them.

Unlike many features and series on the internet which are keyed to the player with Pro Tour ambitions or aspirations, Magic Beyond the Box instead looks back to a time each and every one of us has crossed at one point or another: the beginning. Alright, not the very beginning – learning how to tap mana and smash face with critters is probably something you learned before you started looking for more advanced play techniques on the net – and we’ll safely assume you’re proficient in how to actually play. Today we’ll be taking a look at Magic design, a chief worry of R&D, and how this has influenced the evolution of the Premium Deck Series.

Let’s begin with a pop quiz. What do the following things have in common:

While there may be several correct answers – including "things you don’t want to find on your kitchen table" – the answer for today is this: they’re all parasitic.

Of course, the Magic definition of parasitic differs slightly from something that sustains itself in your lower intestines but it is important to understand if you’re looking to have a comprehensive idea of how your cards are actually designed. With the Great Designer Search 2 currently underway there’s no time like the present to start looking beyond the cards.

The R&D definition of parasitic is relatively simple. In short, parasitic cards are those that compel you to play with other cards. Here’s an example: taken in a vacuum Oran-Rief Survivalist is little different from Grizzly Bears. They both cost two for a 2/2. However take that same Survivalist and put him in a deck filled with other Allies, such as The Adventurers, and suddenly he’s punching well above his weight.

The Survivalist is parasitic, then, because he compels you to play with other Allies. Yet because many Allies are decently-costed on their own you don’t necessarily handicap yourself by playing with a few of them at the draft table. You might say that Allies are lightly parasitic.

Magic’s latest darling mechanic, Scars of Mirrodin’s Infect, is a little further up the parasitic chain. If you’ve put together a deck that contains about half Infect-creatures and half conventional ones, you might be excused for thinking you’re getting the best of both worlds (especially when you’re passed a Skinrender or two). But careful! Because the Infect and non-Infect creatures are interacting with what are essentially two different life totals you’ve actually managed to extend your opponent’s life by about 50%.

Can you do this? Sure, but much like heavily playing creature auras it begs the question: why would you want to? The upside is far outweighed by the negatives, and playing this sort of strategy hinders your ability to consistently win. Still it’s certainly doable and Infect creatures can be used to weaken your opponent’s defenses for your conventional creatures, so we’ll call this moderately parasitic. 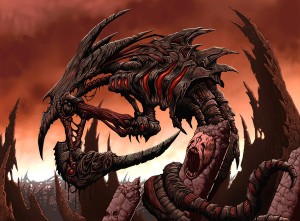 See where we’re going here? Now if we wanted to find something that was heavily parasitic, we can find a great example a few years ago with 2004’s Champions of Kamigawa and the Splice onto Arcane mechanic.

Splice onto Arcane was a very intricate and somewhat complicated keyword that allowed you to get multiple uses out of certain spells by “splicing” their effects onto other spells with the Arcane subtype. Well, you seldom get anything for free in Magic, and the ability to reuse spells over and over again comes at a cost. Compare the following analogues: Shock and Glacial Ray, Giant Growth and Kodama's Might, Consuming Vortex and Unsummon. In each case, the Kamigawa version is either more expensive or simply weaker for the same cost.

Imagine, then, if you played with just a handful of Splice cards. You’d effectively be hamstringing yourself for little appreciable benefit (unless the amusement of your playgroup qualifies as a ‘benefit’). Splice onto Arcane is heavily parasitic: it all but demands you play with Arcane spells, or your deck is strictly worse that it might otherwise be.

So what does all this have to do with the Premium Deck Series? Given the buzz and interest surrounding Fire & Lightning you can be reasonably certain that these premium decks will be an annual release. But understanding parasitism in Magic gives you an idea of the direction they’re coming from, and some ability to predict the focus of future sets.

Last year’s Premium Deck Series: Slivers was the first of its kind. At that point there had not been any product like it and there was certainly some understandable concern as to whether or not players would shell out $35 for what was in essence just a shiny precon deck. It seems that Wizards hedged their bets a little in their theme selection, going for something they knew had been a money-maker in the past (Legions was a big success, in large part to the reintroduction after a five-year hiatus of the Sliver subtype. Indeed, when Scourge was released Sliver Overlord was the “chase rare” of the set, worth twice as much as nearly any other). It’s understandable logic: “Hey! If the players have gone nuts for these things in the past let’s use them to move this premium deck concept!”

Unfortunately, the charmed life of Slivers had run out. Today many copies of The Slivers are still available on the open market, going for even for less than half of their initial cost. The players had spoken: $35 for a pack of shiny Slivers was simply a price too high to pay.

What was Wizards to do? They certainly didn’t want to give up on the concept of selling their cards at an enormous markup: what company would? They simply went back in the tank and evaluated where they’d gone wrong with this initial foray and how they might apply those lessons to turn the product line’s fortunes around.

And the answer was bound up in the heart of parasitism. 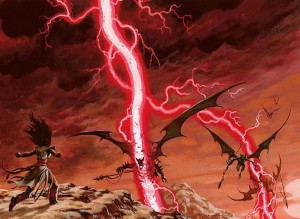 One of the factors that has most contributed to the success of the game has been the advent of new formats. There wasn’t always a draft, of course, and other ways have playing the game have emerged and taken hold. Two of these in particular – cube drafting and EDH – have found many adherents very interesting in “pimping out their decks” by using premium cards wherever possible in lieu of normal versions. As the From the Vault series has shown, players are willing to spend top-dollar for premium cards that have wide utility in these sorts of decks. And that was Wizard’s misplay: by releasing a parasitic product they greatly narrowed their potential customer base.

Slivers are certainly a parasitic card type, spanning the range from lightly to heavily depending on the particular Sliver. A Muscle Sliver is the same as the Oran-Rief Survivalist is the same as Grizzly Bears. A Homing Sliver on its own? Gray Ogre. A Clot Sliver is a slightly worse Drudge Skeletons, while a Heart Sliver is a much worse Raging Goblin. That said, Slivers quite obviously optimize in packs and few players are clamouring to play onesies or twosies of them.

Burn spells, on the other hand, simply aren’t parasitic. The value of one is not contingent on how many more you have in the deck, and most every deck that plays Red plays burn as a matter of course (Why wouldn’t you?). Throw 35 shiny, foily burn spells and iconic red nasties in a deck and what do you get? A moth-flame magnet for every EDH player or cubemaker who pimps out their cards. To get any comparable use out of Slivers you either needed a Sliver general in EDH or a huge swath of card space taken up by Slivers in your cube.

It’s only been out for a couple weeks at the time of this writing, but look for Fire & Lightning to be the premium product that Slivers fell short of being. By selecting a far less parasitic theme Wizards consequently broadened the scope of the deck’s appeal and it's success will cement the likelihood of future Premium Deck Series releases.

And while only the future (and Wizards) knows what forms these future decks will take it’s certain that they’ve learned their lesson – and have already started applying them.

9 thoughts on “Slivers and the Secret of Fire”