First off, huge props to Corbin for his second place finish at the SCG Legacy 5K on Sunday. Onto the business.

There are things in the online writing world concerning Magic articles that trouble me. First, how do we know that the author is truly providing us with all of the information? I have been a subscriber to Star City Premium for almost three years now, and in those three years I've read articles that have left me feeling enlightened about a subject, and articles that left me doubting very much the author was telling me up to date and relevant information, or if they were giving me last weeks testing results, keeping this weeks information for themselves.

I want you guys to know that since you're paying to read this content, its going to be as up to date and as useful as it can be. If I think a card is about to heat up or cool off, I'll try to keep you informed of it here every Tuesday and on Twitter through the week. Any advice I give is the same advice I'm using for my own personal interests, and you can rest assured that you being one of our Insiders means a lot to me, so I will do everything in my power to make sure its worth your money on my end. I've gone back through my old articles and updated them when possible so anyone who went through them would still find the information relevant. Hopefully you find some value in this.

The spoiler season is in full force, and while I do not enjoy making a snap judgment, there are two cards in particular I want to touch on. No, they aren't Hero of Bladehold, or Thopter Assembly. For that matter I doubt either of the two are rare. The cards I want to focus on today are Plague Myr and Signal Pest. While the auto-card probably won't bring them up, I found a picture for the pest. The Plague Myr however, is as follows: 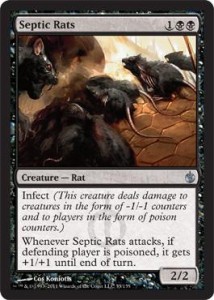 Its subtle, for sure, but its also one of the things that an infect deck needed to put itself into true contention. It offers a cheap creature that doesn't cost any colors to bring out, and accelerates you into a turn 3 Hand of the Praetors. I've championed this card for a number of months now, advocating that they are a great pick up with Mirrodin Besieged just on the horizon. With the confirmation that Infect is returning, and the new keyword Poisoned being introduced, its easy to see how Infect could end up being a deck, and if so, the Praetors might need a hand in spreading the disease a bit faster. If we see a one drop infect creature, things will go insane since your games could end up looking along the lines of:

While that may be a bit of a Magical Christmas Land scenario, it's not unreasonable with decks such as UB control and Valakut being around, but I'll leave the in depth strategy to the Spike guys.

I could be completely wrong on the call for Hand and Plague Myr. It could be that its just not enough to push the infect deck into the realms of playability; which for us means profitability, but what if it does? Lets see how other comparable situations worked out.

A year ago, Kabira Evangel sat unused, just recovering from being valued at under a quarter. It was at about .35 cents, and then Worldwake dropped. The price doubled in just under three months, hitting a lofty average of .82 cents at the height of Allies deck play, where it currently sits. Not interesting until you put that kind of statistic on a card that already has casual appeal, and is a lord to boot. Currently the average price on Hand of the Praetors is $3.52. If he doubles, the average price is going to be just cresting $7.00, which means vendors will be selling him for 8-9+ depending on tournament popularity, and buying him from 5-6, also dependent on popularity. For the time being he sits in most players binders, a mocking grin on his face, knowing that his day is coming.

You can probably get him as a throw in at this point in most trades, or use him to even out deals. Point being, hes dirt cheap to many players right now, competitive players more than most, but that window may soon be closing. As more and more cards are spoiled from the new set, its very likely that players will be looking at old, under rated and under valued cards to fill out the deck. Of course the infect deck could be given a creature along the lines of Talus Paladin that works well with other Infect creatures, but I think we're getting ahead of ourselves here. 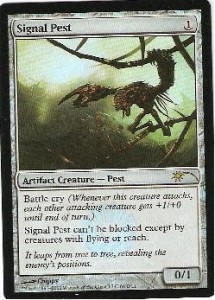 The other card I mentioned, Signal Pest, provides interesting ammunition to fast aggro based strategies. I could see this easily fitting into anything that uses little guys to get the job done, and could bring about more use of Kuldotha Rebirth. Its downside is that it doesn't pump its-self, so until we know the rarity of this card, its hard to say much more about it. I'm guessing it will be an uncommon. I don't see the "all other creatures" effect being powerful enough on a 0/1 to warrant it being a rare or above.

While I can easily see it fitting into the Tempered Steel deck in extended, making it a 1 cost 2/3 with a lord effect on all other creatures for damage every attack step, until we see more of the set I'm not convinced of its use in standard, and therefore, its long term profitability. I have a feeling over the next week we will see a huge upswing in spoilers and know a good majority, if not all of the set two weeks past that.

6 thoughts on “A Helping Hand”