Paris, the city of love. And just in time for Valentine’s Day, the results from Pro Tour Paris have hit the books. Looking over the top performing decks in the Standard portion, we can clearly see areas in which we can speculate. So let’s dive into this new world of Standard, and take a look at the movers and shakers from PT Paris. I’ll highlight several cards that take slots, or there are a considerable lack of, in the top decks, and whether they’ll be moving up or down price.

Grave Titan is the staple finisher of U/B Control decks. It quickly replaced Frost Titan due to its ability to effectively fight a Jace, and create an entire army when it lands. But Zombie Belly’s time in the spotlight is ending. The first sign was the printing of Go for the Throat. While this amazing removal spell out of Mirrodin Besieged was really only adopted in U/B itself it still reduced the power of Grave Titan, as Doom Blade was no longer floating around. The Pro Tour only confirmed what many were thinking, when traditional builds of U/B utterly failed in their efforts. U/B was weak to the U/W Caw-Go control build, to fast draws from Boros, and to the U/B or Grixis Tezzeret deck. Overall, it’s clear that Grave Titan’s time on center stage is coming to a close, and U/B decks will need to find a more effective anti-control finisher, or else fall behind in the search for victory.

Now, this isn’t really a fair prediction. Mystic has already skyrocketed up to $18, so I can’t claim that I knew this prior to it actually happening. I’ll even admit, Mike Lampert talked to me about a potential increase in Mystic before the Pro Tour started…but I kinda just ignored it. Personally, I hate Stoneforge Mystic whenever I cast it, not because it’s bad, but because it’s not my type of card. Yay for principles…I guess? This does bring up an interesting point: never let your own personal feelings for a card get in the way of how you deal with it economically. If Hornet Sting ever leaps to $5, I’m not going to question why this would happen. I’ll pick some up, sell them, and THEN rant about how bad the card is. Now, I don’t feel that Mystic can maintain its current price for very long, as $18 is slightly insane, but it won’t settle below $10 for a very long time.

Both Swords played a crucial role in the success of the Caw-Go deck at the Pro Tour. One of the best things about the deck was its ability to go on an aggressive Hawk+Mystic+Equipment plan against other control decks. These aggressive draws were only enabled by the Swords, which generated additional value for their controller every time they connected, eventually putting the game so far out of reach, that it would be impossible to come back. Both swords have hovered at around $10, but the FaF variety has recently gone up to about $15. I think FaF will always be of higher value than BaM, because having untapped lands is so good in a control deck that wants to deploy threats and hold up countermagic. Either way, both of these Swords have much more room to run, so I would recommend trading for, but not buying, these now.

Jura is quite an interesting planeswalker in that he will spike, then decline slightly back down to close to his previous price, then spike again. After Pro Tour Paris, Gideon is well due for another spike. Gideon played a massive role in the success of U/W control decks at the Pro Tour. He served as a way to buy time against aggressive decks, remove creatures from the board against midrange strategies, and acted as a massive threat in the control mirror. His ability to protect Jace, and the spot he occupies on the deck’s curve, all push him even farther along the scale of playability. While there are several obvious pickups after the Pro Tour, such as Stoneforge and the Swords, I feel that Gideon will be slightly overshadowed by them, and so you might be able to find him for a lower price, or trade for him more easily.

Not a single Valakut deck showed up in the top 8 of Pro Tour Paris. Valakut was the favorite deck going into the tournament, the most consistent, and the most popular! What happened? Simply put, I don’t believe Valakut gained enough from the new set to keep it competitive. It was already teetering on the brink of mediocrity, and then it only gained Green Sun's Zenith (though I guess Slagstorm could also be seen as a very slight improvement), while other decks gained powerhouses. Valakut has a tough time with aggressive decks in the first game, before Pyroclasms come in, and control decks are an issue now, with the Sworded up Hawk plan. As Valakut continues its fall, the headline of the deck, one Mr. P. Titan, will slump as well.

Mainly due to the failure of Valakut to place at PT Paris, just like Primeval Titan, Zenith will also take a slight price hit, though I can’t imgaine it being more than 1 or 2 dollars. The real kicker for Zenith’s worth will be Extended season, and whether it can be utilized effectively in Fauna Shaman decks such as Ooze Combo or Elves! If it is, then its price will certainly rise, but otherwise all the hype may have been for naught.

Though War Zone’s home deck, Kuldotha Red, didn’t make a huge splash in Paris, War Zone will hold value over the coming weeks until another large Standard tournament occurs. Kuldotha is one of the cheapest decks out there, except for some form of Quest aggro, so many will play it because they don’t have the spare cash for Jaces or Fetchlands. In other aggro decks, War Zone is less popular. The other played aggressive deck, Boros, often focuses on swinging with only a few large landfall creatures, so adding an extra point of power isn’t usually worth it. Quest is a much better deck for War Zone, but its high amount of White mana symbols means that the lands it can play are very restrictive, though I have seen some copies of War Zone showing up, replacing some Tectonic Edges. Overall, War Zone will remain stable for the time being because it is a necessity for aggressive strategies.

Let’s move on to the comment contest. The winner from last week’s article is “The Chandrian” (hopefully a reference to the greatest book of all time, The Name of the Wind). So, please send me your shipping address, and I’ll get your cards out to you. If you haven’t received your cards yet, don’t worry. I bundle my outgoing shipping, so I’ll send out the first few winners all at once some time during the next week. Next week’s prize is yet to be decided, but I promise it will be something good! So remember, comment under the article with one positive comment, one constructive criticism relating to the article, and one future article idea to be eligible to win.

I’d like to end this week’s article with some props to give out. I recently sent out some cards to get altered for my EDH deck. Jeremy Froggatt has been writing articles recently about card alterations for the Starcitygame Talent Search, so I contacted and commissioned him. I have to say, I could not be more pleased with the results. The work was fantastic, and I highly recommend talking to Jeremy if you ever want to get a card worked on. pictured here is the Primeval Titan, the scan of Azusa was a little too large to put in the article. 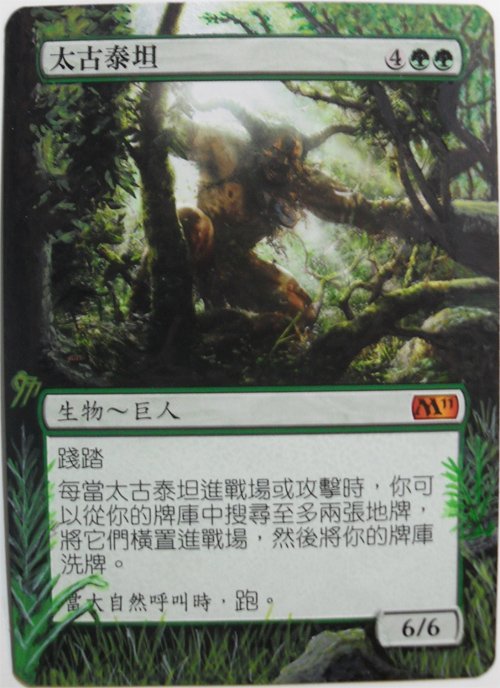 2 thoughts on “The Parisian Aftermath”