So we had some interesting suggestions to resolve this issue. This week I'm going to pretend I'm the Head Judge and the comments from last week are rulings that were appealed. Each person did a good job of backing up their choice, and this situation does have a little gray area around the way you can handle it. So lets get right into it.

For some context for those who missed last weeks article, here is the situation: 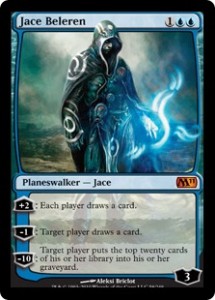 “JUDGE! I have a question. I played Jace Beleren. I put him in play with a die set to 3 on him. I rolled it down to 2, and said ‘draw a card.’ I drew a card, and a second later, my opponent drew a card. What do we do?”

His Ruling: Issue a Warning to the Jace player's opponent for a Game Rule Violation and put a card at random from his hand on top of his library.

His Reasoning: An ability was resolving and this player resolved it incorrectly.

My Thoughts: I have a hard time with a player incorrectly resolving his opponents ability. Usually a player is quite clear when their opponent is supposed to do something. Especially when that something is to draw a card.  If everything was done clearly we wouldn't be in this situation in the first place. In the moment I would likely uphold this ruling. However after having weeks and many levels of judges to discuss it with, I don't believe this is correct.

His Ruling: (from what I could gather) Issue a Warning to the Jace player for a Player Communication Violation. Put a card from the non-Jace player's hand back on top of his library.

His Reasoning: Moving the die down a number was clear. His statement out loud was not. And what you say is more important than what you do.

My Thoughts: His reasoning is spot on. In the world of communication, the things you say out loud are much more binding than what you do with your hands. Its easy to accidentally knock a die over, or drop a card out of your hand when announcing a spell, but you generally think about what you say before you say it. We tend to hold you to what you say more than what you do, and this was quite ambiguous. However, a Player Communication Violation means that a player needs to have misrepresented Free or Derived information as described by the Magic Tournament Rules. This action does not do that.

His Ruling: Issues a Game Loss to the non-Jace player for (I assume here) Drawing Extra Cards. Issue a Warning to the Jace player for a Player Communication Violation.

His Reasoning: A Grand Prix is a Professional Rules Enforcement Level (REL) event, and players should be held to a high standard of play. The Jace player's opponent should have clarified what was happening before drawing a card.

My Thoughts: First of all, I should point out that day one of a Grand Prix is run at Competitive REL. Day two is run at Professional. That being said, this is the ruling that is correct. I wouldn't however issue the Warning for a Player Communication Violation for the reasons stated above. The Jace player was unclear, but not about what would be considered Free or Derived information.

The thing that sticks out to me the most, is that from one player's perspective, this ability as resolved exactly as expected. The player who controlled the ability announced it, paid the cost, and resolved it with no issues whatsoever. If the other player was confused about what was happening, he should have clarified before he drew his card. It is a tough lesson to learn at any level of event, but the potential for abuse of situations like this require a heavy penalty go along with it. I would uphold (half) of this ruling, and issue a Game Loss to the Jace player's opponent for Drawing Extra Cards.

I want to point out though, that after a discussion with @starwarer, there is a good chance I wouldn't overturn this ruling. There is a lot that goes into the appeal process, and a big part of it is your discussion with the floor judge that caught the call originally. If during our discussion he made the points that he did in his comment to last weeks article, we would have discussed it a bit and maybe flushed out a better ruling. However at this point I've had weeks to think about it, and would have only minutes to consider during an actual event. It's likely his reasoning would convince me enough to rule as a Game Rule Violation.

As always, Keeping it Fun (and sometimes tricky),

There are three types of information in tournament Magic: Free, Derived, and Private.

Details of current game actions and past game actions that still affect the game state.
(Did you cast a Giant Growth on that creature this turn?)

The name of any object in a public zone.
(Is that a Soldier token or a Myr token?)

The physical status (tapped/flipped) and current zone of any object.
(How many Lands do you have untapped?)

Player life totals and the game score of the current match.

The number of any type of objects present in any game zone.
(How many cards are in your hand/graveyard/library?) 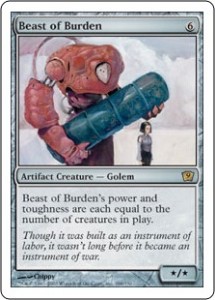 All characteristics of objects in public zones that are not defined as free information.
(What is the Power and Toughness if your Beast of Burden?)

Game Rules, Tournament Policy, Oracle content and any other official information pertaining to the current tournament. Cards are considered to have their Oracle text printed on them.

Private information is anything that is not Free or Derived.

When asked a direction question about Free information, you have to answer truthfully and fully.

When asked a question about Derived information you cannot lie (or it would be a Player Communication Violation, or possibly worse) but you can choose not to answer.

If asked a question by a Judge about any information you have to answer truthfully and fully. You can ask to do so away from your match so your opponent doesn't hear the answer.

5 thoughts on “On the Floor: GP Denver Resolved”