In Africa there is one animal responsible for more human deaths than any other. It's not the Jungle Lion, or the Rogue Elephant, or even the Stalking Tiger (because killer tigers live in Asia, not Africa). No, the deadliest animal lurks beneath the water, silent and deadly, waiting for others to invade its territory: the hippopotamus.

In the case of Commander, equally deadly is the Phelddagrif, a hippo that looks friendly but secretly plays a highly political game that ends in teeth and blood.

Everyone has a pet deck. If you read StarCityGames you'll know Sheldon Menery returns to Kresh the Bloodbraided as regular as clockwork. My pet deck is the "Group Hug With A Dagger" led by Phelddagrif. Most people understand and recognize a true Group Hug deck, one that attempts to 'play friendly' with the entire table. The Dagger deck plays on the expectations of people up in a pool with a Phelddagrif deck by acting friendly in the early turns, then decidedly unfriendly later on. The reason I enjoy this is because, ultimately, I prefer to win through politics than through power and the Dagger deck allows me to push my influencing skills to their utmost.

Communication during Commander games in Magic Online is very important and happens in multiple ways. Imagine one axis of communication as the option for either Public or Private discussion. On the other axis is either Overt or Covert messaging. This creates the following styles of communication in the multiplayer format:

Here's a diagram to make it a little clearer: 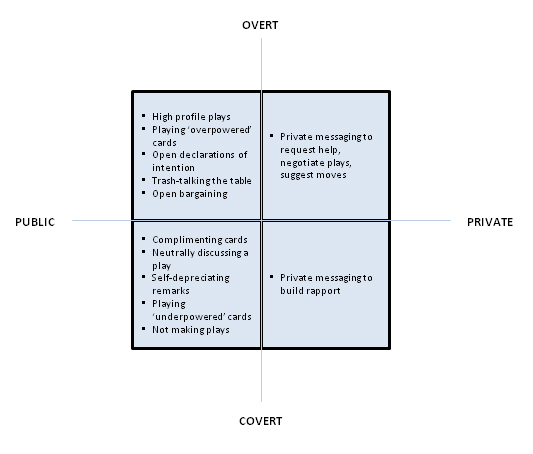 The Dagger deck subverts the first two forms of public communication as it signals one thing (smiley, happy Hippo holding hands) while disguising its true intent (faster, hippo, kill kill). Below I'm going to describe a game I recently played with the Dagger deck to demonstrate how you can use various quadrants to help you achieve victory. 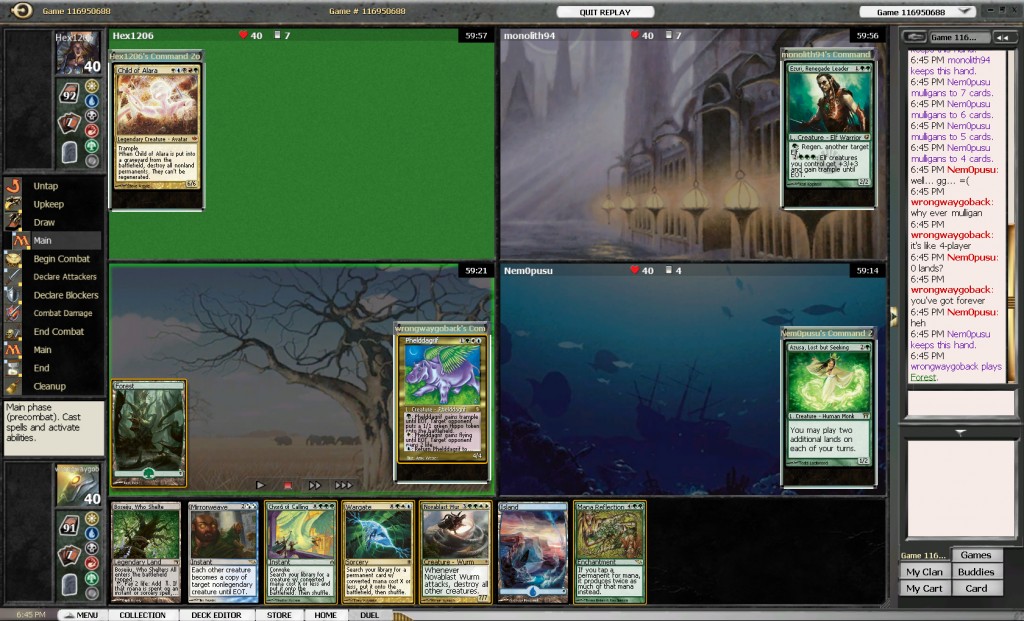 In this game I was playing against Hex1206 with a 5-color Child of Alara deck, Monolith94 with monogreen Ezuri, Renegade Leader and Nem0pusu with monogreen Azusa, Lost but Seeking Ramp. Both Monolith94 and NemOpusu were playing what appeared to be similar lists, which isn't surprising as monogreen ramp is a popular choice for Magic Online at the moment.

In the early turns the usual ramp occurred. Hex1206 made some very Public/Overt plays early, however by laying down a fast Sun Titan. I made my own overt play trying to stick a Mana Reflection however it was quickly destroyed by Hex1206, who adds insult to injury by attacking me with the Sun Titan. At this point I made my first Public/Covert play with this line:

My aim was doublefold. Firstly, I wanted my other two opponents to focus their attention on Hex1206. Secondly, I wanted to highlight the likelihood that Hex1206 would be playing expensive, overpowered cards in his deck. I needed to get across the message that this guy was a threat without necessarily making Hex1206 incensed enough to take me out of the game.
Monolith94 bought some friends by playing Vernal Bloom, a card which wou,d survive until the final turn of the game. Hex1206 went all out by sticking Ajani Goldmane, followed by Green Sun's Zenith for Oracle of Mul Daya. 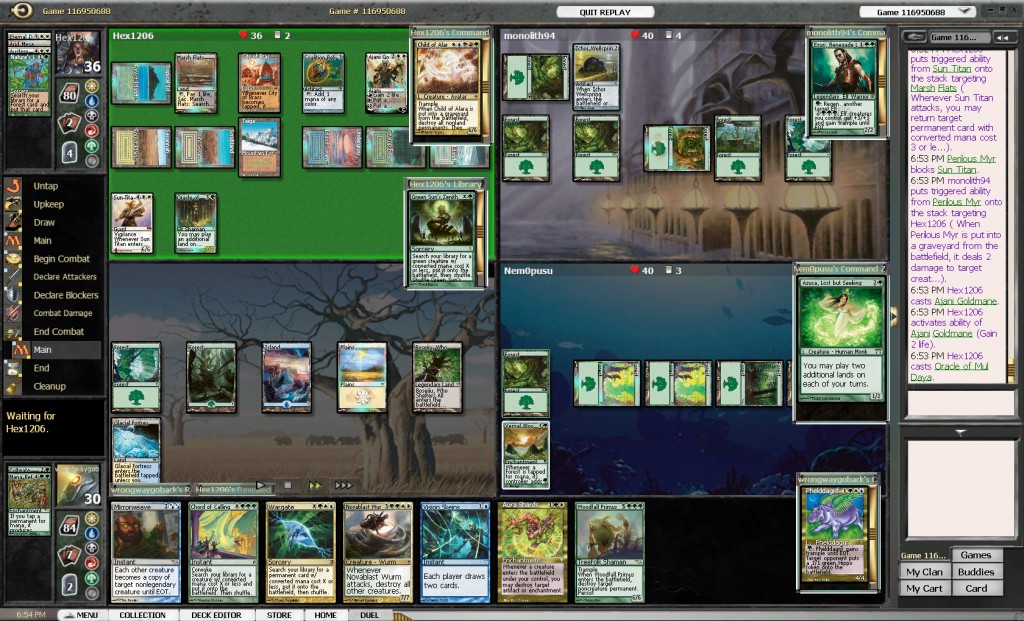 Monolith94 played out a Myr Battlesphere and a Strata Scythe named Forest, then equipped it to the Sphere. NemOpusu spurted out a zillion Wolf tokens off a kicked Wolfbriar Elemental. At end of turn I Chord of Calling'd into an Oracle of Mul Daya, then try to buy friends with a Vision Skeins (a Public/Overt move to buy some friendship from the table and reinforce my faux-friendly-hippo status). I hit an Ohran Viper and played it (a Public/Covert message to not attack me),then followed up with a reminder that I’m the Phelddagrif player (a Public/Covert move to again lose aggro).

Hex1206 lucksacked his way into a second Green Sun's Zenith to fetch a Primeval Titan, but with no good attacks can’t bash in with the Sun Titan.

I considered my options. I had a Novablast Wurm in hand so the token strategies of my monogreen opponents didn't particularly worry me. What worried me was player Hex1206, who had more card advantage and raw power than I could handle.

I opened up a direct chat line to player Monolith94 (a Private/Overt move). I let him know that if he attacked Hex1206 I'd Mirrorweave all his attackers into Primeval Titans. This was a high-risk/high-reward strategy for me as I was trading a short-term problem for a long-term one, but it would kill the deadliest guy at the table while allowing me to make a friend of Monolith94. Plus, how often do you get to see 17 Primeval Titans on the board?

Monolith94 seemed attracted to the idea. I pass the turn, Hex1206 skipped a beat as there are no profitable attacks on the board. Monolith94 hit me up for the Mirrorweave. I choose to do it precombat to allows the land-fetch triggers to occur because, hey, I'm the hippo player, right? 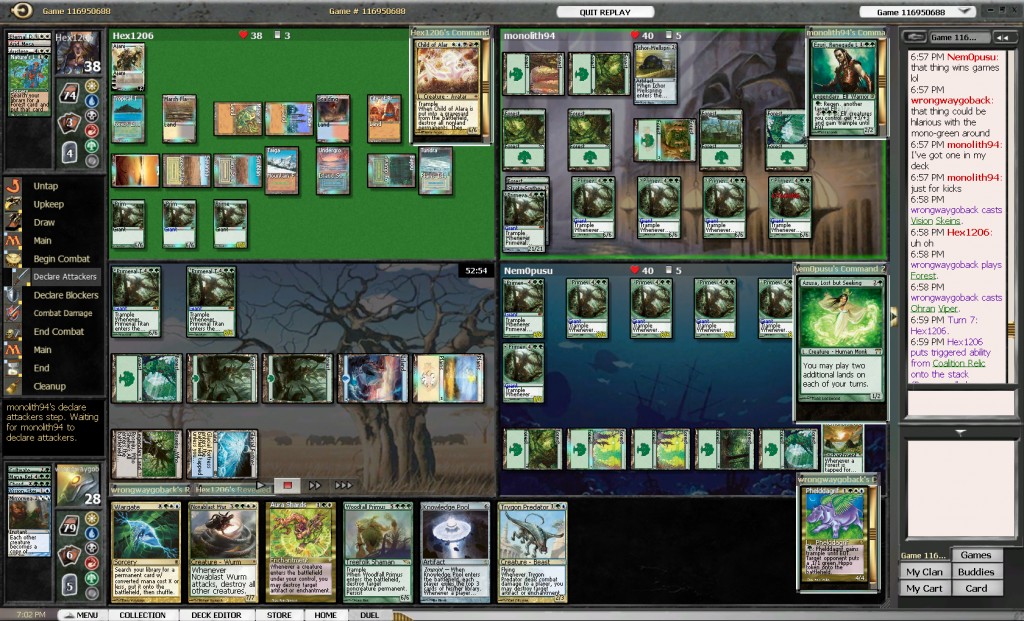 Suddenly Monolith94 had a 31/31 trampler with his four 6/6 buddies aimed at Hex1206's head. Hex1206 had no outs and this prompted the instant concession. Plan A was a success. 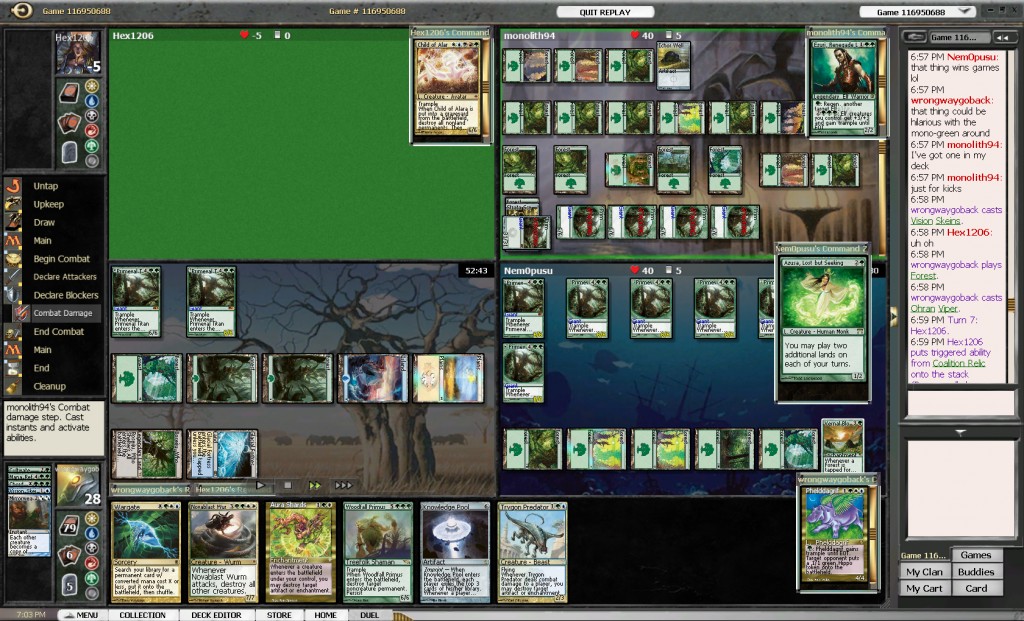 NemOpusu put down a Citanul Flute and Green Sun's Zenith for a Seedborn Muse, then passed the turn. After a bit of mana math, I laid down Aura Shards, a Trygon Predator to kill the Strata Scythe, and then my Hippo to kill the Myr Battlesphere. In one cycle of the board one opponent has been nuked and another’s board position has been decimated (except for the thousand lands he has in play).

There's a lesson there: your opponents are not on your side. If they suggest a play there's a good chance they have a follow-up play to kick your ass. Every time you talk to an opponent you need to ask yourself "What's in it for them?". In this case I managed to devolve two opponent's boards at once, with one of them helping me to do it.

I bash my Viper into Monolith94 to draw a card. I passed the turn and NemOpusu used Citanul Flute to tutor up an Ant Queen. Monolith94 plays a Knowledge Pool, a card I really love in Commander. The field takes a while to settle after that, but NemOpusu pushed it off the table with a well-played [Creeping Corrosion] by pushing it through the Knowledge Pool on his own turn. I try for my own mind games by suggesting openly that Ant Queen plus Seedborn Muse is the best win-condition on the table (a Public/Overt communication to convince Monolith94 to attack into NemOpusu). But NemOpusu wasn't having any of it, rightly suggesting I'm not playing Group Hug but "Aggro Hippo". NemOpusu attacked into me with his critters and I blocked as many as I could.

Having noted the loud-and-clear signal from NemOpusu its time to move into the end-game, I laid down a Novablast Wurm (a Public/Overt move). Monogreen has singular problems dealing with Novablast Wurm, and it's also one of the best creatures for nuking token strategies. I also stuck a Brigid, Hero of Kinsbaile, another great creature for opposing token strategies, but without haste she's fairly useless. 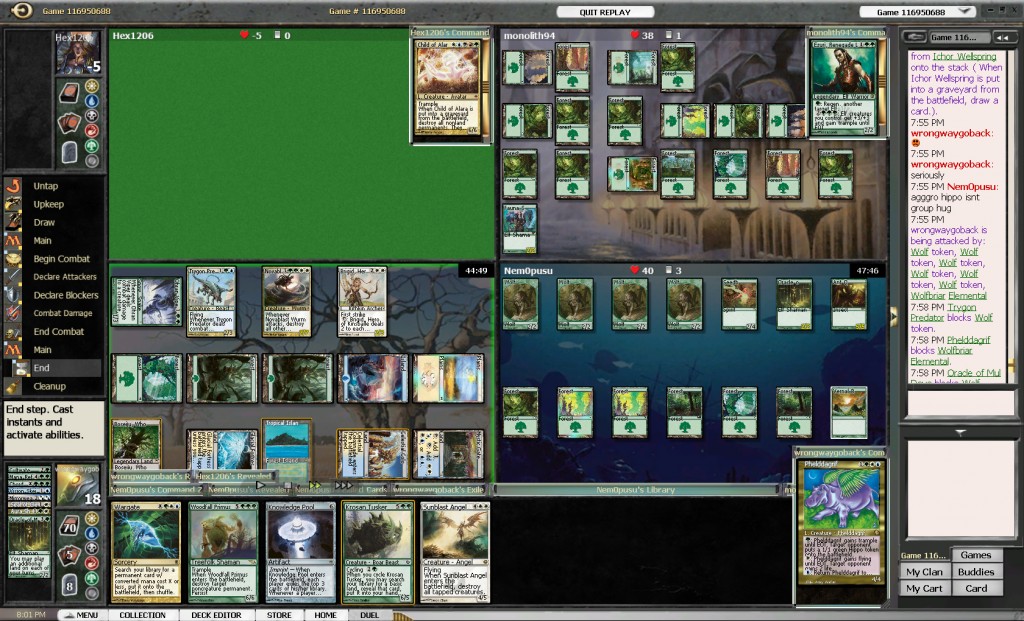 I note my vulnerability to Ant-death. In response NemOpusu declares he's not planning on making a million tokens and skips making tokens on my turn, a terrible misplay.

Then Monolith94 kicks 33 Wolves off his own Wolfbriar Elemental and suddenly its insects ahoy from NemOpusu. who then cast a Genesis Wave for nine and dropped a bunch of great stuff, including a Contagion Engine to nuke Monolith94's board. 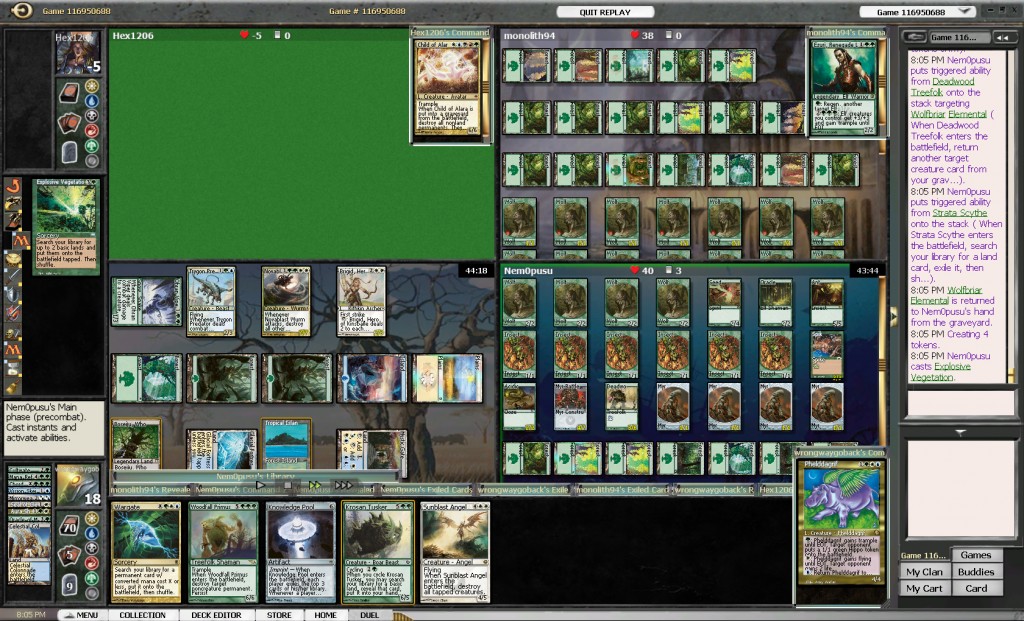 NemOpusu then attacked into me, bringing me down to six life. If he had made the extra tokens on my turn I would have been dead. He shipped the turn and my Novablast Wurm became active.

I Wargate for Venser, The Soujourner and use him to blink my Brigid, Hero of Kinsbaile, allowing me to attack profitably with Novablast Wurm. After wiping the board I land a Hunting Grounds, which should allow me to stay ahead of any attempts to recover from my two opponents. Monolith94 played his general, Ezuri, Renegade Leader, which allowed me to land Woodfall Primus to destroy the Strata Scythe. NemOpusu dropped some more equipment then ships.

My combination of Novablast Wurm, Woodfall Primus, and Venser, the Sojourner got going. It’s nice to kill two noncreature permanents a turn and power up a planeswalker. I followed that up with my own Genesis Wave for nine, and even though all I drop are some lands and Future Sight, it’s enough.

Seeing the writing on the wall Monolith94 conceded. NemOpusu vowed to fight on, but from that point on it was basically Wurm beatdown, followed by some shenanigans with Woodfall Primus and Venser, the Sojourner. I hit a Rite of Replication to stick the nail in the coffin, finally destroying Nem0pusu's Vernal Bloom and leaving him with just eight lands.

He drew the Duplicant a turn too late. I could ultimate Venser, the Sojourner, which I did, then used cards off Future Sight to start exiling NemOpusu’s board, allowing me to swing the many copies of Woodfall Primus for the win. 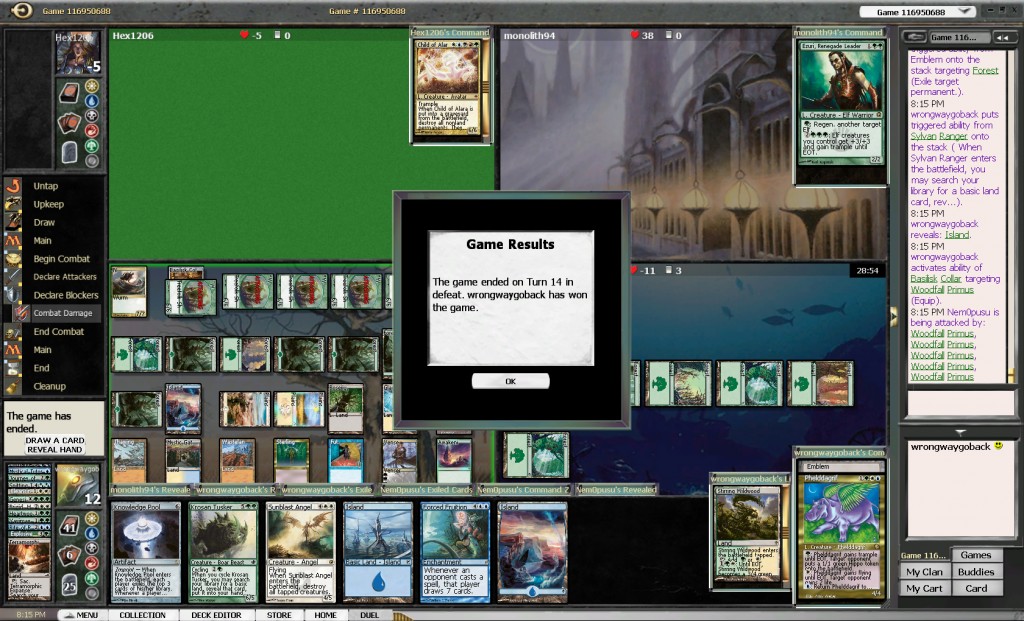 Playing Dagger shows that winning isn’t just a matter of using the most powerful cards you can. Being able to send out the right signals at the right time is a powerful strategy that any player with any deck can attempt. As you play you should take care to use the necessary channels of communication, whether they be Public or Private, Overt or Covert, to influence people into playing how you want them to play for your own personal advantage. To me, that’s the fun of multiplayer Commander; a unique set of social interactions every time.

Plus killing people with Hippos.

6 thoughts on “Gaming the Game for Fun and Profit”