It's cookout season, and whether you celebrate Canada Day, the Fourth of July, or Ratcatcher's Day, it's the perfect time to invite some friends over, throw some meat on the grill, and hang out in the yard until way later than you expected. [Editor's Note: This is pretty much the best thing ever. Really!] And the food! Burgers, steaks, chicken, corn on the cob, and the subject of today's article, hot dogs.

We all have our own favorite style of hot dog. Mine is the all-beef kosher frank, but you might like ballpark-style mixed meat ones, or chicken, turkey ones, or even vegan options. But if you really want to impress your friends this summer, why not serve up something they've probably never had before? 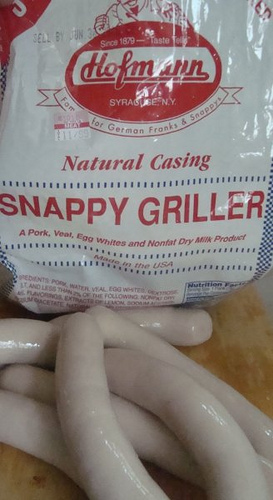 First, a bit of history on how these tasty white weenies have been prepared in the past:

The first is by Kasparadi from 5/3/2011, and the second is by Eightfists8 from 6/20/2011; both were undefeated in their respective Pauper Daily Events. As you can see, the basic recipe hasn't changed all that much between spring and summer. Both of these are certainly good, but they're a bit too traditional for my taste. And while they're usually pretty well-received, they rarely make a really memorable impression. I've tried these things out all kinds of different ways, and I've cooked up a recipe that spices them up without diluting the flavor that makes them a true classic. Some of the changes might be jarring at first, but don't worry; I'll explain them all in good time. Take a look:

If you'll allow me to drop the decklists-as-recipes conceit for a moment, I'll explain how I arrived at this list. I started by making a few observations about the White Weenie deck and its place in the metagame:

1. Fliers are awesome in this format, and this deck can run more and better fliers than anything else.

2. Most of the best and most commonly played removal in the format is sorcery-speed, so if there are any creatures that are immune to sorcery-speed removal, they're probably worth a look.

3. The deck likes to play a lot of artifacts.

4. The deck really wants to play a big, bad four-drop, badly enough to play the non-evasive and incredible mana-intensive Shade of Trokair.

5. The biggest strength of the deck as a whole is the ability to play huge bombs that shut out certain decks.

Bearing those in mind, here are the reasons for some of those atypical card choices:

Glint Hawk Idol: This is the slot usually occupied by Leonin Skyhunter, but Glint Hawk Idol is just better in my view. With the help of Ancient Den, it usually activates for free, and immunity to Flame Slash, Journey to Nowhere, Arc Lightning, Rolling Thunder, and a host of other key removal spells makes it a great inclusion.

Vault Skirge: Best one-drop in the format, best card in the deck, and best creature ever printed. Ok, some of that is hyperbole, but my love for this card is through the roof. Leading with Vault Skirge followed by the already-awesome Bonesplitter is probably the single strongest opener this deck has.

Thundering Tanadon: Shade of Trokair is ok, but you're kind of putting all your eggs in one basket with it, and tapping out every turn to try to deal damage is no fun. Thundering Tanadon is a monster for a one-time payment of four mana and four "life," whatever that is. Plus, it runs right over chump blockers and trades with Affinity's copious 4/4s. Sounds like a winner to me.

That's really it, but some of the omissions might seem equally puzzling. I only run two Benevolent Bodyguards and zero Icatian Javelineers, because I just don't think they make enough impact, and I want to run as many fliers as possible. I see this deck as an exercise in applying steady pressure in between blowing your opponent out with bombs.

And there are bombs aplenty in this deck to be sure, each meant to blow out a specific opposing deck. Holy Light can swing any combat in your favor (hence the single maindeck copy), but it really shines when it's single-handedly winning games against token decks and red-based storm. Prismatic Strands is an even better Moment's Peace against monocolored aggro decks (which just so happens to be nearly all of them), and it also really puts the hurt on burn and red storm. Order of Leitbur is practically unbeatable by Mono-Black Control. Aven Riftwatcher, Kor Skyfisher, and Vault Skirge make burn decks a highly favorable matchup even pre-board. Journey to Nowhere easily breaks up creature stalls, and Dust to Dust can buy you enough time to win against Affinity, especially when they can't block any of your creatures because they all have flying. With this many high-impact plays, it's not that hard to get there with a bunch of 1/1s and 2/2s.

Pretty rosy picture, huh? Well, there's one tiny problem: the phrase "Frantic Storm" does not appear anywhere in the above paragraph. That's either an oversight on my part or an indication that Frantic Storm is an absolutely atrocious matchup for this deck. Seriously, it's grim, you guys. Fortunately, I happen to have a three-pronged attack plan to take it down:

2. Use your removal to take out some of their familiars. This will buy you an extra turn in about one out of every five games. Unfortunately, you probably spent that turn tapping out for Holy Light, so it doesn't help much. This really only works if they have a bad enough hand to be a turn or two slow to begin with.

3. Use Benevolent Bodyguard to keep Thundering Tanadon on the board even after they combo out. This only works if they're already at really low life, because otherwise they'll just bounce it the following turn. To be honest, I'm not even sure it's possible to win a game this way.

And if all of that fails, just mash the F6 key repeatedly, make your opponent play out every game until the bitter end, and hope they accidentally run out the clock. Yeah, it's miserable. However, there is some good news on the horizon: Frantic Search is banned! Yes, really!

Don't get too excited, though. The deck is still real, and losing its best "free" spell isn't enough to stop it from being a bad matchup for white weenie. What it does is:

Don't expect it to drop off the face of the Earth completely, but most of the folks who were playing it because of how massively unfair it could be will probably put it down post-banning, which should make for a metagame that's a lot less hostile to creature decks of all kinds. Furthermore, white weenie actually stands to benefit more than most, because its matchup against Frantic Storm is so horrendous and its other matchups are generally pretty decent.

It gets a secondary benefit as well: as more and more people pick up creature decks in this new, less-hostile world, white weenie shines even more thanks to its ability to trump opposing creatures with Journey to Nowhere and Holy Light. The future of white weenie, like the sun as it shines down on our metaphorical cookout, is truly a bright one.

That's all for this week. I hope you find this new style of white weenie to be just as juicy and delicious as I have!