Welcome back for another installment of Magic Beyond the Box, where we'll be busy today exploring the dark underbelly of the Scars block Intro Decks. Last week we took a cheerful, happy jaunt through some of the block's success stories: the five best-rated decks from our in-depth reviews on Ertai's Lament. But life has a way of leading us to balance, and with that in mind we'll be taking a look a the five worst decks today.

I'd like to stress first that "worst" is a relative term. The worst car on the lot at 'Friedrich's Haus of Benz' is probably better than the best car at 'Wheedle's Used Automotive and Appliance.' When we last took the best/worst approach, in Zendikar, we had some real clunkers to contend with, like Rise of the Eldrazi's Totem Power and Zendikar's Pumped Up. These were dreadful decks which quite rightfully deserved the ill-attention they drew. However, some measure of mercy should be shown to the decks of Scars block, which have made strides to redeem the format.

Although we never intended our grading system to represent an 'absolute value' for a deck, our 5-point scale has given us a good idea of where a deck stands in relation to its fellows. For instance, when we look at the average rating for Zendikar block, we find it clocked in at 3.88 (a solid 'C'). And Scars block? 4.35, which is just shy of B+ territory. And that's the average score, mind you. It does give us cause for optimism when Magic 2012 and Innistrad are released later this year.

But if we're not finding faults with the decks, then we're not trying, and on that basis here are the five worst Intro Decks of Scars block, the ones on the low side of the score.

This deck represented the first real attempt since the original Mirrodin block in 2003 to revisit the mechanic of affinity. One of the game's most famously broken keywords, it had quietly resurfaced in artifact-themed casual releases such as the Planechase deck Metallic Dreams as well as Duel Decks: Elspeth vs Tezzeret. Naturally enough, these were controlled environments where the inclusion of the odd Frogmite, Qumulox, or Myr Enforcer couldn't do a lot of harm.

With a return to Mirrodin we could reasonably expect to see the return of affinity in some form, and Wizards did not disappoint. With metalcraft, certain cards offered increased benefit if you had three or more artifacts in play, a simple and more balanced answer to the desire to encourage play with artifacts (the original impetus behind affinity). Alas, here Wizards did disappoint a bit. It's not that the deck was bad, it's just that it was somewhat bland. First of all, it left you at the mercy of the red zone. Despite the presence of red it only had three burn spells, and despite the inclusion of blue there was only a single bounce, so most of your talking would be done in combat.

The bulk of the deck seemed to be crammed with cards that were as much gimmick as they were utility. Cards like Golem's Heart and Golem Foundry are dreamcrushers if drawn late, and the Riddlesmith and Embersmith similarly get worse the longer the game goes on. Metalcraft would continue to improve as the set went on, but sadly Metalcraft is as it is forever. 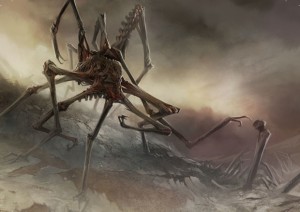 Forget the rather cheesy name (which still makes me think of this every time). Forget the somnewhat goofy 50's-style sci-fi design of the premium foil rare, Psychosis Crawler. To be sure, Doom Inevitable is a flawed deck.

It has inconsistent removal, a bit too much gimmickry, and is more than happy to give you extra card draw to draw into some of its more egregious clunkers. Even if you get to ‘live the dream’ of popping an Oculus to Vivisection, there’s every possibility that all you’ll be doing is filling your hand with a Horrifying Revelation, Trigon of Corruption, or Armored Cancrix. Death-by-proliferation is a strategy which in the absence of a Contagion Engine requires focus to perform consistently well. Doom Inevitable falls woefully short here, and ears the three-slot on today’s list as a result.

But you know what, let’s forget all that, too, and take a moment to acknowledge Doom Inevitable’s more noteworthy place in history. This past February, Wizards R&D mouthpiece Tom LaPille wrote about Intro Packs in his weekly column Latest Developments, perhaps inspired by the recent Great Designer Search 2 challenge focused on them. “We think a lot about simplicity when building Intro Pack decks,” Tom explained. “When we include a set's new mechanic in a deck, like kicker or landfall, we don't include another new mechanic. Once a prospective player has learned something relatively complicated like infect, we want to reward that person for it, not punish him or her with another equally complicated thing.”

We don’t have to go back all that far to see this principle in action. Indeed, we need only glance at last year’s middle set, Worldwake. As a second set should, Worldwake took the core mechanics of Zendikar to new places. Zendikar gave us kicker, while Worldwake amped it up to multikicker. Landfall was one of Zendikar’s more exciting innovations; Worldwake took the keyword and extended beyond creatures and into instants and sorceries. Indeed, the Intro Decks for the set were neatly divided amongst these mechanical lines. On the one hand you had the multikicker decks, Brute Force and Flyover; and on the other there were Mysterious Realms and Rapid Fire, which played with landfall. The odd-man-out was the tribally-themed Fangs of the Bloodchief, which featured only one card with either mechanic (Bloodhusk Ritualist).

What’s interesting is that while LaPille mentions “set’s new mechanic,” none of these decks dip so much as a finger into the opposite mechanic from Zendikar. You won’t find a single kicker card in Rapid Fire, for instance. What a difference a year makes! While the decks of Scars of Mirrodin stuck to this formula, Mirrodin Besieged turned it on its side by blending two different mechanics in one deck. Thus we are treated to an unusual hybrid in Doom Inevitable, the intersection of proliferate and living weapon. Alas there’s not a dollop of synergy between them, so while it marks a very welcome layer of complexity to the Intro Decks, here we are at number three.

Despite factional differences, Battle Cries is every bit the sibling of Doom Inevitable. Like its Phyrexian kin, it too mixed together two different keyworded mechanics- metalcraft and battle cry, with equally lackluster results. While there's perhaps a shade more synergistic overlap here with cheap-costed artifact creatures like Memnite which up your artifact cound and provide aggressive cannon fodder for an over-the-trenches, battle-cry-fueled charge, only one card really tied both halves together (Signal Pest).

You might think that Battle Cries would at least fare better than Doom Inevitable, but it is itself doomed by heightened expectation. The other deck was by half too clever and gimmicky, but it gets points for trying. I'm much less charitable with a red and white deck that packs a lackluster burn suite and underwhelming creature selection, things which are firmly in its wheelhouse. The Accorder Paladin was a particular disappointment, as the Scars environment is filled with ways to punish one-toughness attackers. Doom Inevitable tried to do something novel. Battle Cries was just a weak Boros deck. 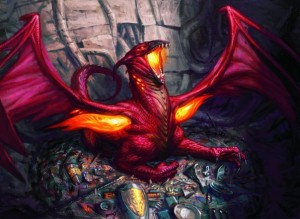 There seems to be a budding tradition with Mirrodin that each visit to the plane has to include the release of a 'spoiler' deck, one which excels with the very narrow meta of its own set, but gets dramatically weaker outside of it. Wicked Big was Mirrodin's, an obese, bloated deck filled with green fat and artifact hate. This time around, they've added red but still kept some of the fat.

Even accounting for the playset of mana Myr in the deck (two for each color), a whopping ten cards have a converted mana cost of 5 or more. The trap with such an expensive spread is that it greatly increases the chance of drawing an 'effective mulligan,' an opening hand where one or more cards are simply uncastable while you develop your manabase. This isn't so bad when you're up against some of the slower proliferate-based decks, but something capable of quick starts like Myr of Mirrodin will often run rampant before you're able to establish board presence.

I don't normally call for the inclusion of Core Set cards, but Manic Vandal would have been a nice tempo inclusion here and tiled the deck a little more towards a manageable midgame. And that burn suite? Two Arc Trail, a Fireball, and a Turn to Slag. Enjoy.

Pity poor Deadspread, for it was doomed from the start. Broadly speaking in the context of Scars block, there are four different ways to maximise proliferate: planeswalkers' loyalty counters, artifacts' charge counters, players' poison counters, and creatures' -1/-1 counters. In the designing of an Intro Pack deck, mythic rare planeswalkers were right out. So was poison (again, note Tom LaPille's dictum against crossing the streams quoted above). That left charge counters, which isn't all that glamourous, and -1/-1 counters. It was in that moment that the notion of proliferate as effective removal was born. By now, three sets in, we have plenty of tools to take advantage of the mechanic, but not in the beginning. Deadspread, in short, was a victim of its time, with an aspiration that the card pool it had access to could not hope to fulfill.

Last February during the course of the Great Designer Search 2, Tom LaPille had this to say about Shawn Main's blight mechanic:

Blight frustrated me a lot, as every blight did half of what I wanted it to do. I just wanted to kill stuff, and the delayed blast that blight had was really frustrating... [One submitted card] reads, and plays, to me like "Destroy target creature. Just kidding, actually don't. Maybe next turn." It made me wish I just had Doom Blade.

LaPille could just have easily been talking about Deadspread. The struggle to get on those first critical -1/-1 counters often felt like half the challenge of the deck itself, and you already have enough to play against in a game of Magic (Hint: your opponent). Then once you had one or two on, then came the grinding, expensive work of making them multiply fast enough to kill your opponent's critter before it killed you. However cool the concept and mechanic, Deadspread was just not an adequate vehicle to showcase it. And the Doom Blade? Almost as if to teast you, Deadspread packed in a miser's copy.

As I mentioned in the beginning, one shouldn't read too much into the word "worst" this time around. The top of the list was a triumph of overreaching ambition over ability and the rest were varying stages of medicore. I didn't get the feeling that I had to hold my nose in playtesting these decks as I did with the last block, and I'm thrilled to see the direction that Wizards is taking the Intro Pack. Even in this day of the Event Deck, the introductory-angled product doesn't need to be bland to be effective. Chances were taken in Scars of Mirrodin, and that in itself is worth of praise, even when the occasional attempt fell rather short of the mark.

One thought on “The 5 Worst Intro Decks of Scars Block”