Your Last Chance For Jace and Stoneforge

Recently I traveled out to Baltimore for the Star City 5K. This was the last chance for everyone to play with their banned cards, and attendance showed that players truly wanted one last chance to succeed with them. This was noted by the 450 players in attendance on Saturday for the Standard portion of the tournament. Briefly, I toyed with the idea of playing Caw-Blade or some similar deck, but that did not last long. If you have read any of my other articles, you know that I have been playing Vampires the majority of the time for this Standard season and I saw no reason to do otherwise for this last tournament before the format changed drastically. I suppose I felt I had something to prove also with all the close calls I have had with the deck. There was Star City D.C. when I lost to Elves last round to knock me out, the Midwest Masters where I got screwed out of top 8 due to a string of bizarre occurrences, and a handful of other tournaments where I may not have done well but they all felt close.

I did not do any extraordinary preparation for this tournament or anything. Playing Vampires is fairly straightforward for me, and not much has changed in the format. The metagame seemed unpredictable. Would everyone be playing Caw-Blade, playing decks trying to beat it, or just trying out new decks for once the two powerhouses were banned? I had no answers to these questions which was another reason that I played a deck I knew well. Adjustments were made to the deck based on the last time I played, and the sideboard was tweaked as well. Here’s the list I ran.

I suppose I should provide some notes on this particular list since it is not typical. Mortarpod was good for me and I really like it in this deck. Pulse Tracker seemed like a necessary evil in order to lower my curve, but I did side them out frequently. The main deck Manic Vandals were crazy good and I was glad I made room for the fourth in the board. The removal distribution was great for me and I’m sure the Arc Trails would have been good as well but I never saw a single one in any sideboarded games. There was one mistake with the list and that was Mark of Mutiny. Due to rushing and traveling before I made it out to Baltimore I just simply forgot to switch them to Act of Aggression. The marks I never sided but the Acts I would have sided in three rounds. So what did I play against? Well basically not Caw-Blade, but it almost went really well again.

Who would have guessed that Birthing Pod would make such a showing? Luckily I accidentally happened to be prepared with my main deck Manic Vandals. I was quite happy about that. I continued to not be able to beat any Caw-Blade-like deck that also played green mana. That was two of my losses on the day. Sadly I was one red removal spell short of top 16. Game three of round ten I would have sent it to game three if at any point I would have seen any of the red removal spells. All I needed was a Lightning Bolt or even better, Arc Trail, to rid myself of the pesky Mirran Crusader I was facing off against. I never drew any of them though so that Crusader beat me down for my life total.

One thing in particular that I learned from this tournament is that Phyrexian Obliterator is literally insane. It is powerful enough that I will most likely be playing it for the entire time it is legal in Standard. My rule for the weekend was that for any non Caw-Blade, non Splinter Twin match, all four came in. Obliterator destroyed Boros and the three Birthing Pod decks. It also came in against the g/w guy but I never saw them.

I was extremely happy with the list I brought to battle in Baltimore and I played really well. Now I just have to convince someone to loan me a little luck and I’ll get there. So close. Again.

When it was confirmed that Stoneforge Mystic and Jace, the Mind Sculptor were going to be banned my first thought was that Primeval Titan was going to dominate the format. I still think it will be part of the deck to beat and it is going to take some convincing to get me to believe otherwise. With how dominating Phyrexian Obliterator was for me, I feel obligated to play the card. Sticking with Vampires seems good for the interim. To get my fill of this new metagame I will be heading out to Columbus on Saturday, July 2nd for the Midwest Masters tournament. The list for this event is not set in stone but what I am working on is the following.

Of course the deck looks similar, but I think this is pretty close to optimized. Despise is great against Valakut, the Molten Pinnacle, Splinter Twin, and basically everything else, but they could come out in game two for some other type of removal. The Manic Vandals stay in the sideboard for matches like Tezzeret, Agent of Bolas or Hawkward. Depending on how many control decks will see play I could find space for Dark Tutelage again. By just going down to three copies of Vandal instead of all four spots in the board, and then adding three Dark Tutelage, they could easily be there.

At this point M12 is not fully spoiled but there have been some reprints announced that may shake up the format. In a new metagame it is always interesting to see the format take shape. Certainly playing Vampires still is an option but it is hard to say if it will turn out to be correct.

There are a few other archetypes that seem worthy to pursue though. The first that I have on my mind is the interaction between the following: 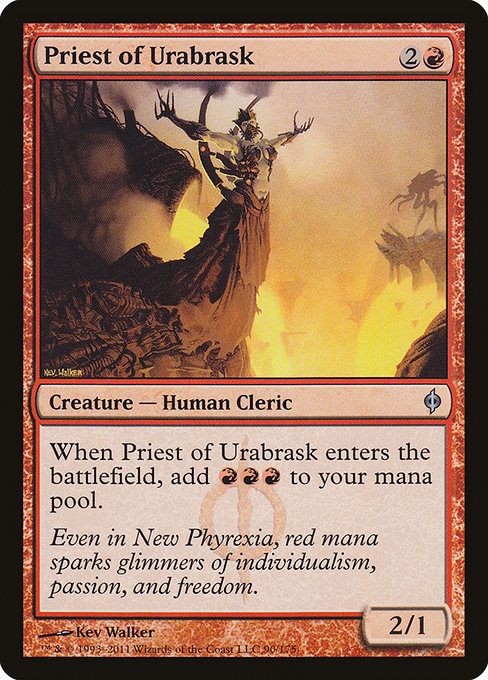 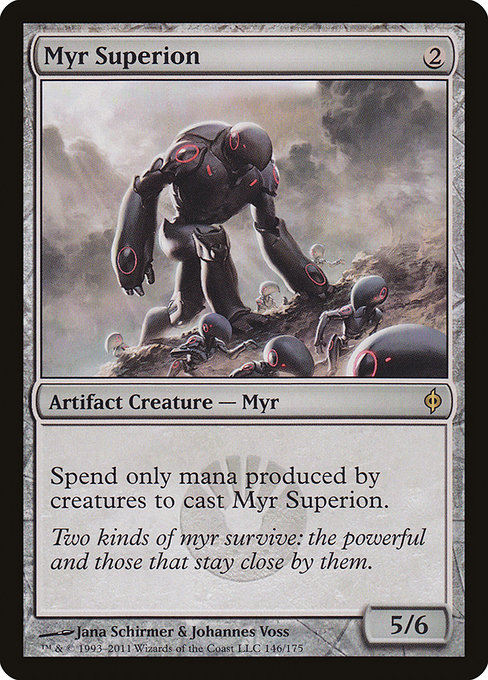 Something like first turn Birds of Paradise, second turn Priest into Superion seems worth looking into. That was part of what two of my Birthing Pod opponents used to base their deck on so I could see that deck really becoming viable.

The other deck that I think will be a real contender is RDW. Incinerate, Goblin Grenade, and Grim Lavamancer are all confirmed in M12. Those cards, plus the ones we have already, might just make for the best RDW since Fireblast was legal. I have been working on a list for such a deck but it is not finished yet. At the moment it would look something like the following but it is a work in progress.

4 Manic Vandal
4 Act of Aggression
4 Dismember
3 Koth, of the Hammer

The creatures are efficient and deadly. The burn is crazy good with a starting point of three damage and some more than that. Plated Geopede seems extremely potent in this deck. The burn heavy game plan seems better to me but it would depend on the metagame. The fetches are there already for deck thinning and Grim Lavamancer so playing Plated Geopede makes sense to me but does it really fit? Also, running the three Goblin Grenades with only seven goblins is a little risky so that might need to change once we see what all is in m12. Overall I like this as a starting point though for RDW. Make sure to keep those Dismembers in the board for when you have to play against Phyrexian Obliterator otherwise you’ll find yourself loosing that match rather than winning.

Hopefully you found this article interesting and helpful. I went with a more traditional style in order to fit in all the information, so if you liked that (or didn’t!), please leave me some feedback in the comments section. Also, if anyone has any suggestions or ideas for articles that they would like to see, feel free to post those below also.

Until next time, Unleash that creative Force!!!