With this past weekend at PAX, the Innistrad spoilers had begun their inexorable march towards the release date. As with any release, their is no shortage of buzz surrounding the new set. Constructed players want to know how their metagame is affected, be it Legacy, Modern, or Standard. Limited players are looking at the set with a drafter's eye, hoping to tease out some indication of the set's draftable themes. And, surprise of surprises, those of us in the preconstructed community are eagerly awaiting the seven new precon decks that we'll be tearing into shortly- first the five Intro Packs, followed by the twin Event Decks.

In the absence of solid information as yet, all we can do is speculate. Although an uncertain sport, we do have the benefit of hindsight to guide us and provide indications of what we might expect. In the modern era of Shards of Alara and up, where the Theme Deck was retired and the Intro Deck arise to take its place- these decks typically fall into one of three groups: tribal, mechanical, or thematic.

Tribal decks will be familiar to many players already. These are decks that are crafted around a particular group of creatures. Zendikar's Kor Armory made little mystery about what tribe it was crafted from, nor did Rise of the Vampires and Worldwake's Fangs of the Bloodchief. Rise of the Eldrazi gave us not one, but two decks dedicated to their namesake nemeses, Invading Spawn and Eldrazi Arisen. Even Scars of Mirrodin got in on the action with Myr of Mirrodin. Ever popular with players, tribal finds purchase everywhere from the humble Intro Pack up through the premium offerings like the Duel Decks and Premium Deck Series.

Mechanical decks are thsoe decks that are constructed around a mechanic or mechanics from a particular set. You saw some of this in Zendikar block with Pumped Up (kicker), Brute Force (multikicker), and Rapid Fire and Mysterious Realms (landfall). Scars of Mirrodin took this to an even more formalized level, giving each mechanic its own deck. Infect took center stage for Phyrexian Poison, proliferate was given the rather poor Deadspread, and metalcraft had the imaginitively-named Metalcraft. Imprint was far too niche to support its own deck. Mirrodin Besieged's mechanics of living weapon and battle cry were then cobbled together with proliferate and metalcraft respectively for Doom Inevitable and, yes, Battle Cries.

Thematic decks are those who have a greater narrative structure. The decks of Shards of Alara block fall heavily within this category. Bant Exalted and Bant on the March were undeniably themed around a particular shard, and that was the guiding principle behind their construction. That's not to say there wasn't some overlap. You could argue that Bant's exalted mechanic was also a theme (making these decks mechanical), but overall it was a more top-down design.

To be certain, there is an occasional exception that comes along, such as Mirrodin Besieged's Mirromancy which was based upon a spell-heavy interaction with Galvanoth, and other decks might straddle the line between two categories. For instance, was Zendikar's The Adventurers tribal because of the Allies, or mechanical because of the mechanical interaction and advantage of packing in a gaggle of them? In the end it matters naught as these divisions are guideposts, not boundaries. The important thing is that we have a framework in mind which takes into account the purpose behind a given precon's construction. 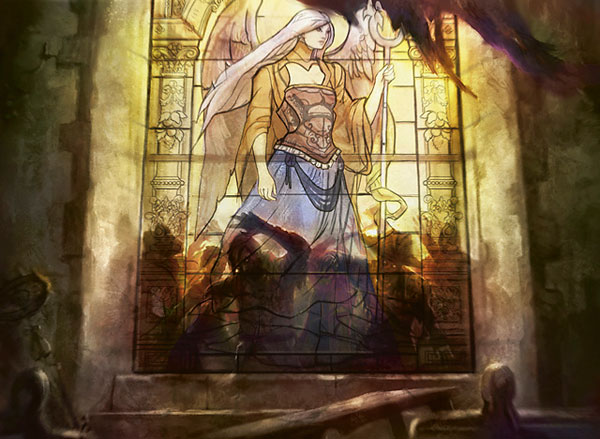 The Horror, the Horror

With a foundation firmly established, let's look at the possibilities for Innistrad. We begin with the mechanical options. As announced by Wizards, we have the following mechanics to look forward to:

Curses are a group of auras that enchant a specific player. Based on the one that's been spoiled thus far, Curse of the Bloody Tome, these are likely to carry color-centric repeatable effects, in this case a mill engine. You likely won't have more than a couple for each color, and thus while we might see an appearance in a precon or two (like Feast of Flesh's pair of Shrine of Burning Rage from New Phyrexia), it's not enough to build a deck around.

Double-faced cards (DFC's) are the signature mechanic of Innistrad, and as such are almost certainly going to have a deck build around them. The most recent analgue we might have for DFC's are the level up creatures from Rise of the Eldrazi. As you'll recall, they were given two full decks devoted to showcasing them, Leveler's Scorn and Leveler's Glory. Could something similar happen here? Not likely, for reasons that will soon become clear. It's worth noting that Wizards prefers to limit the number of mechanics throughout its intro decks, so you're unlikely to find DFC's sprinkled throughout other decks.

'Fight' is more of a rebranding of an already-existing ability often found in creatures like the Cyclops Gladiator from M11's Breath of Fire. Although I suppose it's possible, it's probably not enough to sustain its own deck, though it certainly might pop up on its own.

Morbid is Innistrad's other significant innovation along with the double-faced cards. This keyword operates much like bloodthirst in Magic 2012- it rewards you for playing particular creatures when a battlefield condition has been met. In morbid's case, something needs to have died this turn. This is easily a contender for a mechanic-based deck, as Magic 2012 showcased bloodthirst with Blood and Fire.

Flashback is the returning mechanic for the set. A callback from 2001's Odyssey, it too is a mechanical contender for carrying its own deck. Spell enhancements like this have made for somewhat underwhelming theme decks- look at Zendikar's Pumped Up for such an example, which leaned on the kicker mechanic. On the other hand, New Phyrexia had no trouble crafting such a deck from Phyrexian mana, Life for Death. Such abilities will sometimes carry an 'enabler' card which takes fuller advantage of the mechanic: Worldwake's Brute Force tried to optimise multikicker with Rumbling Aftershocks, while Life For Death carried a pair of [card Rage Extractor]Rage Extractors[/card]. If Innistrad has such a card that interacts with flashback, the chances for a mechanical deck focusing on this mechanic likely increase.

Of course, this is only one set of possible scenarios. 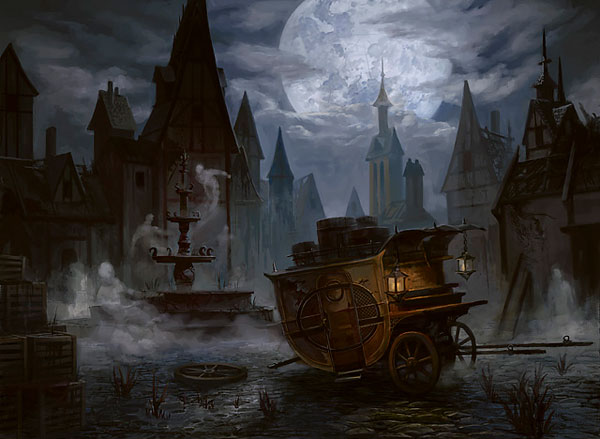 Another intriguing possibility is that the set takes full advantage of its heavily tribal theme, and releases decks for each tribe. As of this writing, the tribes we know of are as follows:

Given that each tribe is comprised of a unique two-color combination, and each colour is equally represented, it's fair to conclude that this is a bottom-up design not dissimilar to that of the ten guilds of Ravnica. As such, it's certainly possible that we'll be seeing one deck per tribe. So what, then, becomes of the mechanics?

For starters, a Werewolves deck is the most likely deck that will be emerging from Innistrad, as there are two factors working in their favor. First, they're a full-fledged tribe. Second- and this is the crucual overlap- they've cornered the market on double-face cards. A look at the DFC checklist card makes this strikingly clear: a full 13 of the 20 double-faced cards fall in either Green or Red. How many of these are actually Werewolves is impossible to know at present, but the mechanic seems almost purpose-built for them.

Given that the complexity level- ratcheted down for Shards of Alara's new Intro Packs- has come creeping back up in recent releases, I think it's a fair guess that each tribe will see a deck it can call its own. Morbid and flashback will act as supplemental mechanics, and probably not overlap (decks will have one or the other, not both). The Werewolves deck may not see either, given the radical departure Wizards is gambling on with double-faced cards. It might well be adjudged that the DFC's are tricky enough, though 'fight' is certainly possible as a splash with the Daybreak Ranger / Nightfall Predator. 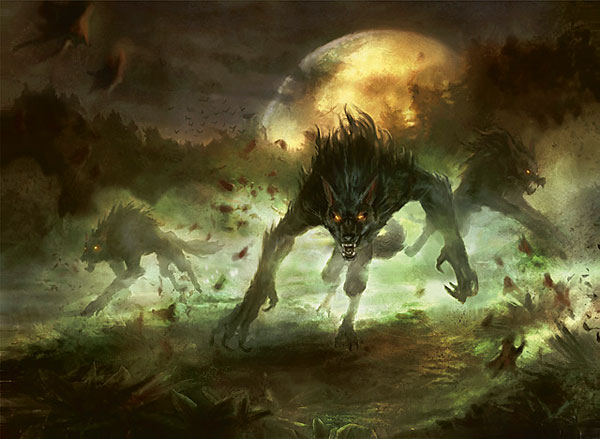 Fear is the Mind Killer

Concluding out thoughts on the Intro Pack decks, we next turn briefly to the Event Decks. These are far harder to predict, because they rely upon a much larger card pool and don't look to 'showcase' a particular set. This latter fact was well in evidence with the Magic 2012 Event Deck Vampire Onslaught, which maindecked only three cards from Magic 2012 (a trio of Vampire Outcasts). It's important to note this distinction, however, as Event Decks have little concern about the set they're being released under. All they care about is making a reasonably competitive deck given the Standard card pool of that time.

Although it might not feel like new territory, since we've now seen a total of six Event Decks released to date, it actually is. Innistrad will mark the first time that Event Decks have been constructed at the start of a new block, and thus will draw upon the smallest card pool to date. The inaugural release, consisting of Into the Breach and Infect & Defile were let loose during the second set of a block, Mirrodin Besieged. And while we've traced the quick embrace of the decks to a mono-colored aggro framework, each colour has now had its day in the sun.

The sixth (Infect & Defile) was an ill-fated Blue/Black amalgamation. What this means, though, is that having given each color a champion, Wizards is free to go whichever way it wants with Innistrad's decks. It will be exciting to see what we end up with as I have no predictions here (outside of aggro or possibly aggro-combo).

Over the past few years, the quality of the Intro Packs has been on the rise. The decks are becoming more consistent rather than being the hodge-podge builds we endured during Alara and Zendikar blocks, and Wizards is now even giving us a real treat with decks that contain viable subthemes, giving us different options to build from (for those of us that like to use the precons as a starting block for deckbuilding). Magic 2012's decks as well as some from New Phyrexia were particularly noted for this, and all signs are pointing to Innistrad to continue to quality we've been seeing.

Oh, and stock up on garlic.

6 thoughts on “The Precons of Innistrad”