Magic prices are impacted by a whole slew of factors.

Factors such as breakout performances in large tournaments, are acute, or, in other words, have an immediate and measurable impact on a card’s demand, driving price up significantly.

Other factors are more predictable and describe the ebb and flow of the Magic market in a broader sense. While the latter are less sudden and require more patience, their predictability can help a savvy player identify key speculation opportunities.

This week’s article will focus on one particular factor of this type: Standard rotation.

Everyone who has attempted an FNM Standard tournament knows that Standard’s rotation is inevitable. With this dramatic change comes the dreaded truth: many card values are going to tank. (This ubiquitous feature of Standard is in fact the main reason I choose not to compete in this format.)

Mythic rares which were once dominant and commanding $20-30 price tags will drop to single digits. For recent examples, consider the likes of Lotus Cobra and Vengevine. Without comparatively dominant homes in other formats, these cards may never demand such high prices again.

Everyone should be familiar with the fact that as Standard cards rotate, they are, in most cases, destined for a significant price slash. The intent of this article is to describe a few upward price trends I have noticed after the last few format rotations. By studying these phenomena, we can in turn make predictions on which cards will go up in price as the face of Standard transforms once again.

I will start with my particular favorite: lands.

While the real estate strategy may not hold up as well in the real world, often times the best Magic card investments lie in the most critical of card types: lands. While this frequently holds true across all formats, there is a particular trend I want to point out in the context of Standard rotation. The best way to outline this observation is to give a couple examples, beginning with the one I alluded to last week.

Every Standard format has had its form of color-fixing, most commonly through lands. These multi-color tappers date back to the game’s inception in 1993, with the original (and most powerful) Dual Lands. Since then Wizards has consistently created lesser versions to be used in Standard. The long-term fate of many of these lands is in an EDH deck or trapped in a casual trade binder, despite having their turn at financial stardom while in Standard.

During their Standard tenure, these lands often follow an interesting price trend. The 2nd most recent cycle, Scars of Mirrodin Dual Lands, are great examples of this trend. 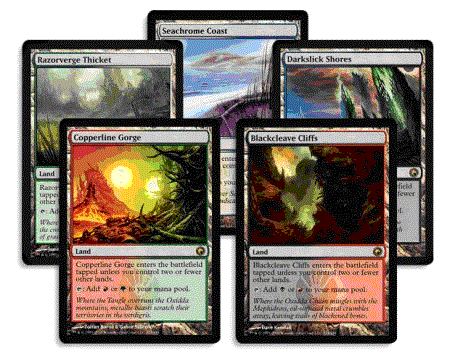 The shape of the price curves for all five lands are similar, despite all being valued slightly differently. See the chart below [courtesy of blacklotusproject.com] for a snapshot of this trend for all five cards since release. 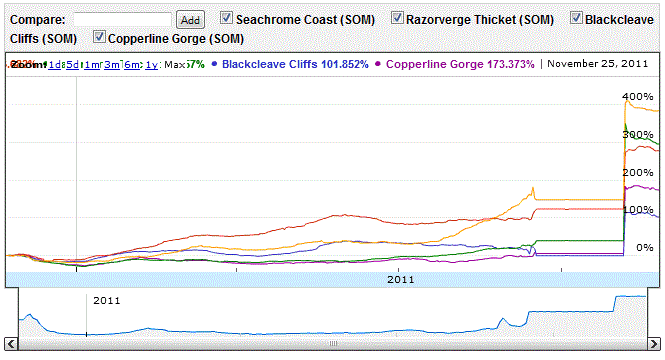 The first thing to notice is that, after initial release, all five of these lands experienced a small relative decline.

This is not too surprising: cards are frequently priced highly at release due to the initially limited quantity. As more packs are opened during drafts and the like, supplies increase rapidly, thereby stabilizing to a slightly lower price.

As the Standard season matured, these lands were relatively flat. While Seachrome Coast and Darkslick Shores saw small increases during the season thanks to the dominance of Caw-Blade / Dark-Blade control strategies, significant price jumps were absent.

Now I want you to focus on where the price on all these cards shot up within weeks. This jump lies directly on top of the Innistrad release, which is, of course, when the format rotated.

Did the supply of Scars Duals suddenly drop post rotation? This is not likely, though it is possible that people stopped trading them away so freely. The main driver for these price spikes is tied to the fact that the format lost two other beloved mana-fixers: Zendikar Fetch Lands and Worldwake Man Lands.

The absence of these beloved lands created quite the demand for Scars Duals, even though Innistrad and M12 also contain multicolor lands. M12 Dual Lands also went up a little bit as well, despite the large quantity printed. Naturally, with this increased demand came a price spike.

This is not an isolated incident. Going back another block, one of the Worldwake Man Lands experienced a comparable price jump upon rotation of Shards of Alara block: 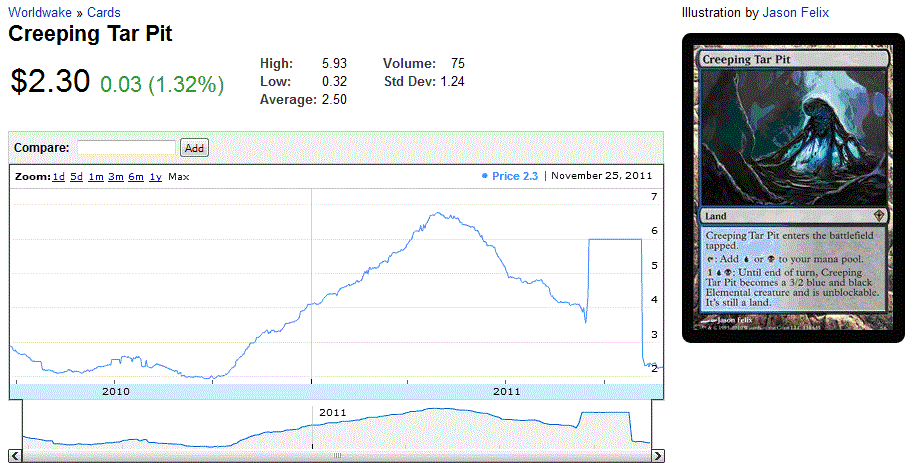 The above chart [courtesy of blacklotusproject.com] depicts the value for Creeping Tar Pit.

On October 1st, 2010, when Shards of Alara block rotated out of Standard, this card averaged $1.97. The format’s rotation was a catalyst that drove the price up threefold. I will concede that the other lands of this cycle did not respond in a similar fashion. It seems bizarre that only Creeping Tar Pit experienced this jump.

While it is possibly due to metagame influences, very slight play in Legacy, and the overwhelming dominance of [card Jace, the Mind Sculptor]Jace 2.0[/card] in Standard, the same phenomenon did not take place with Celestial Colonnade. The reason may be tied to the fact that the Colonnade was the buy-a-box promo for the set. Overall, though, all the man-lands became slightly more sparse in trade binders after Shards of Alara rotated out of Standard.

Looking forward now, it is my belief that these trends will continue as long as Wizards continues to make new pseudo-dual lands once per block. A new set of enemy duals were printed in Innistrad. While they initially sold at $6-7 upon release, most of them have dropped in price already. Reapplying the previous trends, I would predict these lands to drop further as Innistrad is continuously drafted week after week. As the next format rotation approaches and we prepare to say goodbye to the beloved Scars of Mirrodin block, I am anticipating the Innistrad Dual Lands will experience a decent price hike. I plan to grab ample copies of Innistrad Dual Lands in the $2-3 range before this happens and I would recommend the same to my readers.

The other trend I want to discuss is what I call “Mechanic Augmenters”. These are the cards that synergize well with the latest set mechanics and could strengthen in playability as the second and third sets of a block are released. In other words, these are the cards that have the potential to gain value through increased playability as the smaller sets of the block reach players' hands. Let’s look at two examples.

The first example I want to use is Stoneforge Mystic

There was an error retrieving a chart for
: 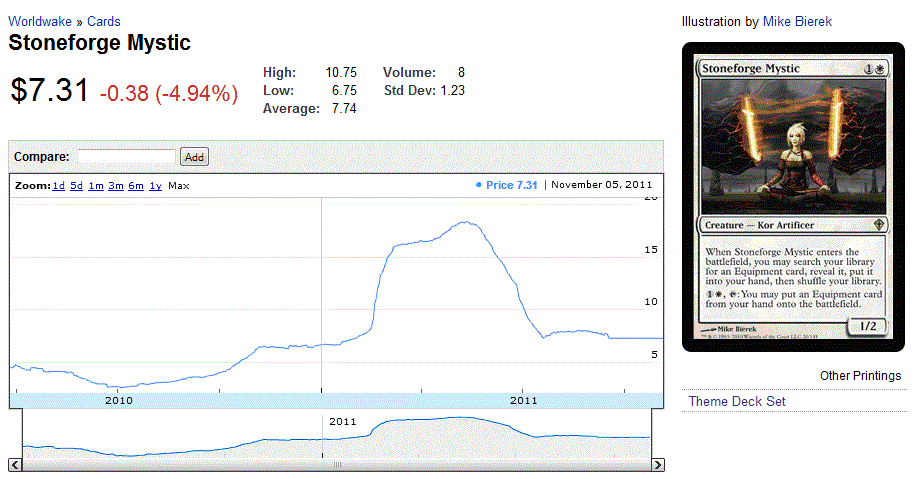 When this card was originally printed it commanded only modest respect. After all, Zendikar block did not deliver strong equipment cards. But by the time Rise of the Eldrazi came out, everyone heard the rumor that the subsequent block would be artifact-themed. And what card type is equipment? Artifact, of course! This was a buy signal in all possible ways, with minimal down side. Worst case, Stoneforge Mystic could have always been a Commander favorite fetching Sword of Fire and Ice and Umezawa's Jitte for eternity.

Sure enough, the creation of three new swords AND living weapons more than exceeded many players’ expectations. Each new set release from this block made Stoneforge Mystic more and more playable (valuable) until, ultimately, Wizards had to ban the card from Standard and Modern altogether! Before this happened, Stoneforge Mystic Mystic tripled in price.

The other example I want to give is Eye of Ugin:

The trend captured on findmagiccards.com highlights what happened very well. The card was originally printed as a virtually useless land. Once the first [card Kozilek, Butcher of Truth]Eldrazi creature[/card] was spoiled, the card price nearly quadrupled. While it did not hold that price for long, this represented a profitable opportunity to the MTG speculator. I still regret missing this one. I discredited the card completely upon first read without focusing on what could have been. Wizards would not have printed Eye of Ugin except to foreshadow what was coming.

Looking forward, I can readily identify at least one mechanic augmenter in Innistrad: Skaab Ruinator. This creature generated much hype when it was originally spoiled, pre-selling for $25. Since then, the card has done nothing but drop in price. At less than $5, the card is garnering my attention. It’s a mythic rare that costs 3 mana and can only get better as more self-milling cards are printed. Plus we have two new sets in this graveyard-themed block to go! This is shouting "opportunity!" at me, and with a very minute risk. I do not plan on missing the next potential Stoneforge Mystic.

This article discussed a more optimistic view of Standard rotation. I used to dread the price drop of all my valuable cards as they rotated. Now I trade them away a couple months before rotation in order to pick up cards that will not be rotating for another year.

I use historical examples for reference when I try to identify speculation opportunities. The above suggestions are not guarantees, but they hopefully provide insight into a novel way of approaching speculation. Now that you have an understanding of how to use historical trends to predict future performers, what opportunities do you see?