Many MTG finance articles are designed to highlight opportunistic pick-ups and historical success.  This is wholly understandable, of course, since readers are often able to benefit directly from this advice.  An alternative writing style may also prove to be beneficial in a broader sense, a style describing the general theory of opportunity throughout the seasonal fluctuations of Magic.  It is my personal belief that this tends to be more thought-provoking and enables the reader to screen future speculation targets a little more independently.

But who am I, you ask?  My name is Sigmund (@sigfig8 on Twitter) and I have been playing the game of Magic for over fourteen years.  What started for me as a casual hobby has since become a holistic understanding of economics.  I am constantly identifying parallels between trends on Wall Street and Magic Card values, ranging from speculation price spiking to seasonal variation, and I hope to relay these insights to you through a series of weekly articles.  It will be my intent to share with you some big picture food for thought when it comes to speculation. 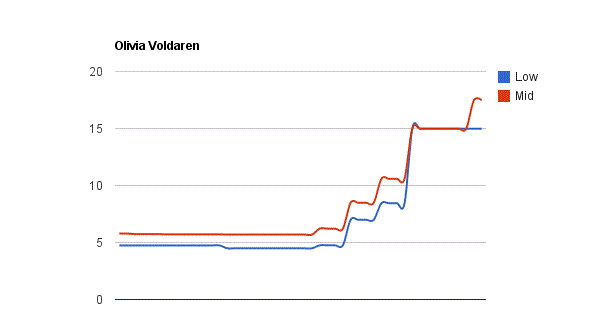 While this graph specifically highlights the recent jump in Olivia Voldaren thanks to Worlds, the shape of the curve is not uncommon.  In fact, there are many such examples of this behavior in Magic history (Frost Titan’s rapid jump and equally rapid decline, Grave Titan’s reign in U/B standard, Birthing Pod’s quick tripling in value, Blazing Shoal’s tear thanks to the Modern bubble, etc.).

My intent is not to predict what break-out card will be used by Patrick Chapin at the next large tournament.  In all honesty, competitive play is too time-consuming for me at the moment, and, as such, it is somewhat restrictive to constantly brew decks and try to anticipate the next big hit.  What I can do, however, is learn how to identify a phenomenon quickly and react accordingly.  With the virtually unlimited number of outlets from which to purchase cards, it is inevitable that you can glean trends before some of them.  This leads to profit.

The first place to go is Twitter. What originally began as a way to inform friends of one’s whereabouts has now become my number one source of up-to-date information.  Twitter is number one in my book because it instantly updates me with others’ observations.  This information will not appear magically on your Twitter feed, though.  Instead, following the right array of people is critical as some will tweet more actively about MTG trends than others.

For starters, following many of the writers on this site via Twitter is one way to garner recent information.  Of course, the most valuable information is often posted on this very site, too.

Having followers also has payouts.  Yesterday I had a demanding day at work and so I was unable to follow the latest trends at Worlds.  So what did I do?  I tweeted this:

Within minutes, I had these responses (despite the typo): 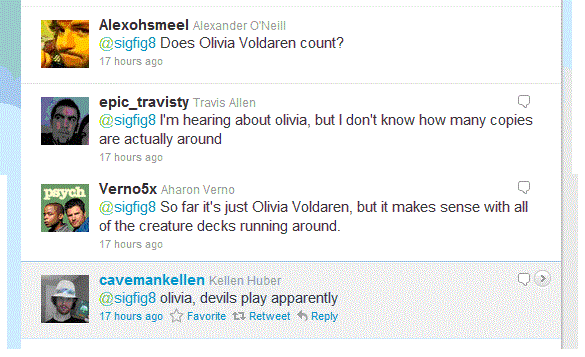 Oh, and one of the best investments you can make to obtain Twitter followers is to do an occasional MTG giveaway.  Even if the giveaway does not equate to a ton of value, you will still earn followers because people love winning in general.

Live coverage of major events is the second place to go. The benefit is twofold.  First and foremost, you can verify that the Twitter comments you are reading are, in fact, accurate.  More importantly, you can identify how successful the novel deck lists are performing.  From there you can make your own assessment of how viable the idea will be.  This may not correlate with how high the card will jump in price, as other factors such as rarity also have a large impact, but it should correlate with how long the card will remain at the higher price.

I want to add a side note here: The specific instances I am discussing in this article refer to speculation opportunities driven by metagame breakouts.  This same information, however, can be reapplied to other scenarios.  For example, when a card from the newest set is spoiled, Twitter is often a place to watch closely as people discuss the implications of the card.  Recent examples include Torpor Orb’s impact on Hunted Horror and, more recently, Laboratory Maniac’s impact on Leveler.  Another example is the banning/unbanning of a particular card.  The implications here are obvious.

Everyone has a strategy for where to look to buy cards quickly before they jump in price.  The concept I espouse relates responsiveness of a particular retailer to opportunity. The two are inversely proportional, meaning the quicker a retailer adapts to trends, the less likely an opportunity will be present.

I propose that the two ends of the spectrum are Star City Games and local hobby stores.  When I picture the operations at Star City Games, I frequently imagine a score of savvy employees constantly updating card prices.  While perhaps an exaggeration, the end result remains constant: card prices on that site are almost always an accurate reflection of instantaneous supply and demand. This is accurate for cards as they rise in popularity.  As cards lose favor, SCG is less inclined to drop prices as quickly. This is an important observation to keep in mind.

Local card shops, both brick and mortar and online equivalents, are often slower to change prices.  This especially includes sellers who do not have as much experience in MTG finance.  As such, this is where the greatest opportunity for profit exists.  And while you may not have access to fifty copies of a particular speculation prospect, you certainly can find small quantities of cards at great prices on a regular basis.

My favorite place to purchase is Card Shark.  Many sellers on this site are relatively inexperienced with selling cards and so their prices are less reactive.  Perhaps the greatest advantage is that, in most cases, these sellers will ship cards quickly to maintain a strong feedback rating.  Therefore there is a lower risk of buying cards and then having your order canceled due to mysterious “out of stock” reasons. 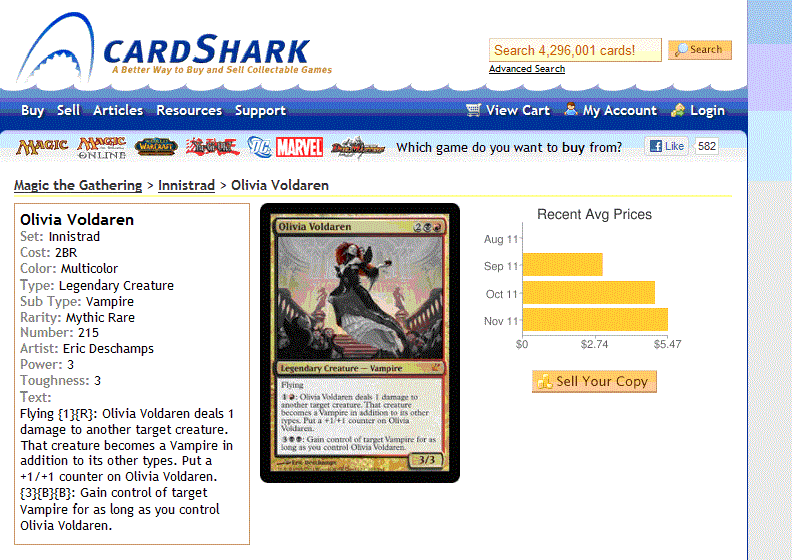 It is the combination of both extremes that drives the best decisions.  I find myself often identifying a card with high potential, looking at how much they buy AND sell for on Star City Games, and then see if I can find a steal from smaller retailers.

Since my time is often occupied with other commitments, I find that Card Shark, eBay, and MOTL are convenient places to find these deals.  You would be surprised at how often I have been able to purchase cards from these outlets at or even below SCG’s buy prices.  Sometimes, no particular catalyst is needed for these opportunities to arise.  It often takes patience and a lot of sifting through retailer buy prices and sales lists.

This article focused on one facet of MTG speculation.  There are, of course, many other factors that create profitable opportunities.  These include format rotation, new set releases, PTQ season rotations, and more.  The list here is perhaps different from the scenario described in the bulk of this article because these latter items are more cyclical.  Additionally, historical trends can often be used to make reasonable predictions.  In future articles, I will use these theories to make future predictions.  Perhaps one of these items will be the major topic for next week.

For now, here is a teaser to consider:

Dual lands from Scars of Mirrodin saw plenty of play during last Standard season (AKA Caw-blade).  Yet, even the U/W and U/B versions sold for no more than a few dollars, with non-Blue versions going as low as one to two bucks.  Once Zendikar block rotated, however, we lost fetch lands AND manlands, driving the demand of Scars Duals.  The prices skyrocketed.  Standard will continue to evolve as the 2nd and 3rd set of Innistrad are released, but what do you think will happen if no additional mana fixing lands are introduced?  Consider this information and try to draw a parallel to Innistrad Duals…