Modern season is nearly upon us, but the infancy of the format has driven a lot of instability and uncertainty around what the metagame will look like. It seems Wizards of the Coast has the perfect format in mind, where 33% of the field is control, 33% is aggro, and 33% is an array of combo decks that do not win before turn four. (For those math experts out there, the remaining 1% can be left behind for some sort of home-brewed “other” category.) Any deviation from this balance has thus far been stunted via critical card bannings.

Whether we agree with all the bannings or not, we must navigate around them if we wish to profit during this season. After all, many Modern card prices have subsided significantly since the Modern “hype” generated upon announcement. Opportunities are definitely out there; we simply need to identify which cards will remain robust regardless of what Wizards of the Coast does to the format.

During the Pro Tour, aggressive Zoo decks were widely prevalent in the metagame, led by incredibly efficient creatures and the notorious Grove of the Burnwillows/Punishing Fire combo. This two-card combination, when undisrupted, creates an infinite loops scenario that most people are already familiar with. Is there a future for these two cards in Modern? Possibly. Though, judging by Twitter forums and Star City Games’ recent drop of Grove’s price (from $14 to $12), many people are hedging their bets that one of the two will be banned.

The only other card I hear rumors around is one of the aforementioned efficient creatures, Wild Nacatl. At 3/3 for just one mana, Wizards may have finally identified a vanilla creature that is too powerful. My initial reaction to these rumors was immediate denial. I felt Wizards could never ban a simple 3/3 creature that can only be strong with a particular mana base.

Then it hit me (in the form of a tweet). Kird Ape, an arguably inferior version of Wild Nacatl, was once banned long ago. It seems that the ability to attack with a 3/3 creature on turn two just might be too powerful for this fragile format.

Should one of the above cards become banned in Modern, there may still be hope for a Zoo-type aggressive deck in the format. However, if Wild Nacatl is banned AND the Grove of the Burnwillows / Punishing Fire combo becomes no more, this could have a profound impact on the Modern metagame.

Zoo decks, adhering to the typical Red/White/Green color combination and driven by the pesky 3/3, may cease to exist. While Loam Lion still does, the loss of one power may be too much to overcome. The result will be a much different metagame. One where aggressive decks can actually be tribal themed and control decks stand a fighting chance.

Without knowing what will happen to the Modern banned list, it is very difficult to anticipate what cards will shine. So in light of this difficulty, what cards are wise to acquire while waiting for the fateful December 20th announcement?

There are a handful of cards I am considering buying (as well as selling) and they each can be separated into specific “categories.” First and foremost, there are the cards which should remain strong no matter what bannings occur. But before rambling off some obvious choices, we also need to keep in mind that Wizards of the Coast has a second bomb they may drop: reprints.

Certain authoritative figures at Wizards have already suggested that some powerful Modern cards will be reprinted. As a result, we cannot simply go on eBay and purchase every reasonably priced Shock Land available. In fact, one major reason these card prices have been kept in check relative to Legacy Dual Lands is the threat of reprint. Dark Confidant is another card which has carried a higher price tag in the past but has since recessed in light of rumors of reprinting. Especially since he would fit in very well with the Dark Ascension theme.

So what Modern cards are versatile enough to be strong regardless of metagame and don’t have a chance of seeing a reprint in the future? The first group of cards that come to mind are Zendikar Fetch Lands. 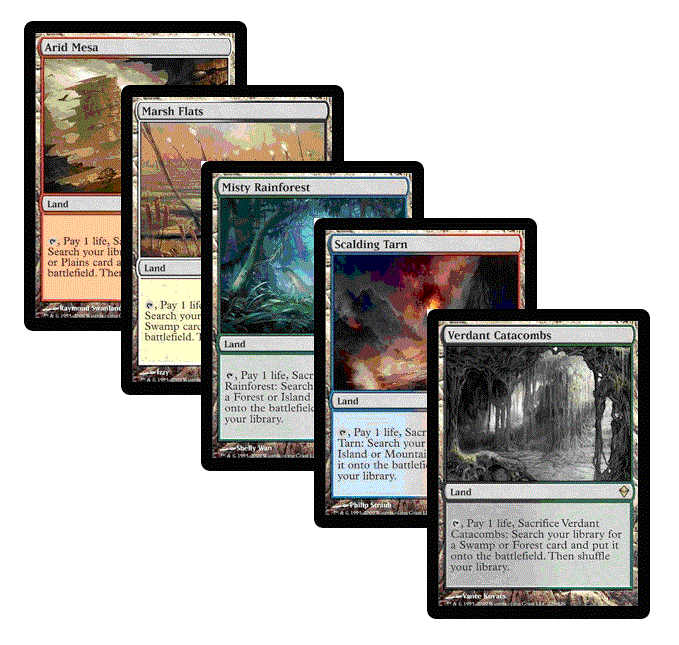 While these were opened in abundance, there will always be a constant demand for these cards as long as eternal formats exist. Progress may be slow, but these lands will one day exceed their $10 price tags.

Misty Rainforest and Scalding Tarn are especially unique because they are Blue. While Zoo decks currently dominate the metagame, the rise of Blue will be inevitable as it always is. In short, these lands will never drop below $8-$10, will always be as liquid as cash, and have the potential to increase during Modern season regardless of what Wizards does. A strong buy.

Another category of cards to watch are cards which received a price bump when Modern was initially hyped but have since resided to a lack of play in the format. Two examples I want to suggest watching in this category are Aether Vial and Thoughtseize. The reason is twofold.

First, both cards are highly played in Legacy, and so demand will be present regardless of the Modern metagame. Second, and more importantly, both cards jumped on Modern hype but have since dropped in price because they do not yet have a consistent home in the format.

If Zoo loses Tier 1 status, then a wide array of Vial-enabling Aggro decks are possible. Additionally, some [card Melira, Sylvok Outcast]Melira[/card] combo decks already run this Aether Vial to some success. The future level of play for this card isn’t definite, but the downside risk is minimal. (Chart courtesy of Blacklotusproject.com) 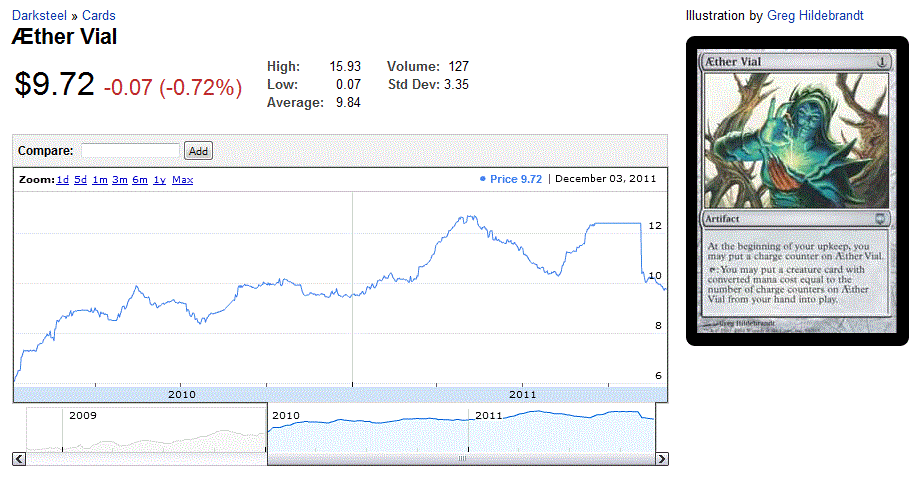 Thoughtseize is a premier disruptor, sure to find a home in a control or combo deck at some point. This card has reached as high as $30 and is a staple in Legacy. Black is severely underpowered in the current Modern format, however, and the card’s price trend reflects this. Now is definitely a good time to acquire your playset of this card. (Chart courtesy of Blacklotusproject.com) 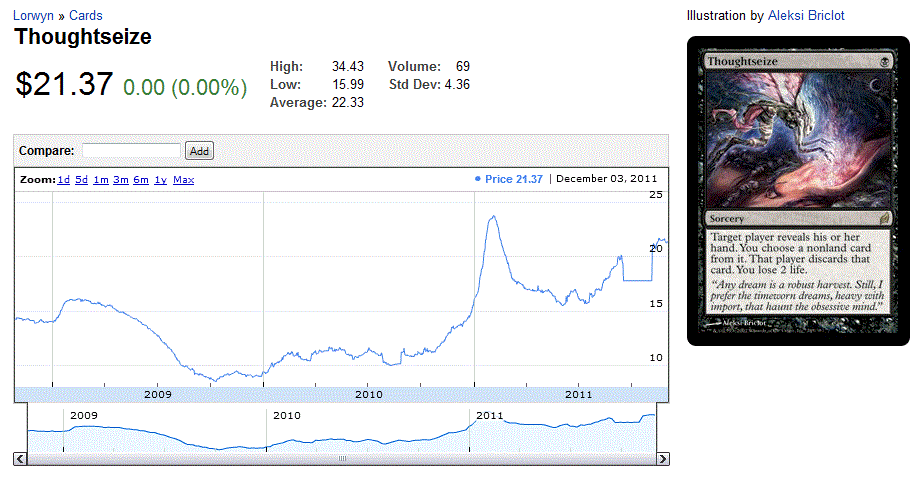 A third and final category I want to touch upon are the cards in underplayed decks which were outperformed at Worlds. In other words, while Zoo is getting all the attention, there are still some strong and strongly overlooked strategies with viability to become more noticed with no regards to the rumored bannings on December 20th or not. Let’s start by taking a quick look at some of the top performing Modern decks from Worlds. 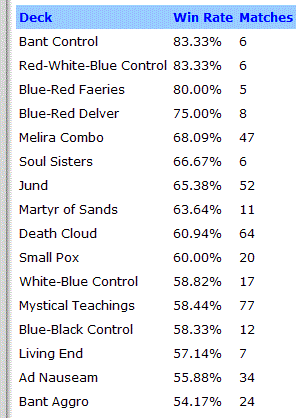 First, I want to point out a trend. The top four performers, albeit with low match count, have one color in common: Blue! While it isn’t as obvious as in Legacy, Blue is still the uncontested strongest color.

Second, I want to highlight decks which ranked highly but also had a decent number of matches. We are basically looking at Melira, Jund, Death Cloud, and Mystical Teachings.

This information is very useful, especially since none of those decks would suffer tremendously from a banning of Wild Nacatl, Grove of the Burnwillows, or Punishing Fire.

Rares and Mythic rares from these decks may be another safe place to turn to for speculation options. My favorites are Maelstrom Pulse from Jund, Death Cloud from its namesake deck, and even Knight of the Reliquary from an array of decks and for her all around utility.

I would also suggest some strong Blue control cards. Snapcaster Mage would be a prime prospect if the card ever drops in price! Nevertheless, there are many options worth considering in these lists and I encourage you to do some into other ideas.

I encourage you to share any other ideas and which category they fall into in the comments section below. And hurry! The holiday season always flies by and Modern season will be here before you know it.

6 thoughts on “Insider: A Different Look at Modern”