I don’t do well with Magic by trading. Sure, I do trade, and fairly often. But for the most part, my trades are fairly even, or I’m possibly sacrificing “value” by whatever measure people consider when they use such a term. Some would say I’m crazy for making a trade that I know is at a “loss in value”. "Loss in value" doesn't mean anything. It means to you, whatever your business plan is for your portfolio, and today we'll talk about my strategy and how it's worked for me. I've noticed chatter on other sites and over twitter, that people are catching on to the Dual Land trend. Hopefully those of you who made some money with me on the Scars Duals, are ready to be moving into Innistrad lands with me too, because the secret is spilling out, and once these hit bottom tons of speculators are going to be jumping on them. So if you feel you are "overpaying" in trades for them. Keep in mind what you're planning to sell them for come next October, not what buylists say today.

When I was a kid, I collected the Marvel trading cards. There were a series of hologram cards in those packs, that were highly desirable (at least in my circle of friends). I made it my goal to collect all the holograms from the set, and I was trading hard for them. One day, I brought my loot home, and showed my dad. I flexed my muscles, and bragged about how I had traded away some marginal value cards for them, and these holograms were worth anywhere from $5-10 a piece. My dad literally laughed-out-loud (and yes I’m old enough that this was long before LOL was a term). He said, “They aren’t worth anything, until someone wants to buy it.” I blew it off at the time, but in the end he was right. The Marvel trading card fad died long before I was willing to part with mine, and if I ever recouped anything for them, it wasn’t much. Who knows, what I gave up for them likely also depreciated to $0, but the fact is the same. It doesn’t matter what an investment is worth until you want to close your position. I avoid selling (Standard) cards more than twice a year (Usually once each in April/May and October). So I only care what the price of these cards will be at that time. Anything I own in the interim are simply tools to help me build the value of what I plan to sell when the time comes.

Timing is Everything
Why April/May and October? April/May is between the release of the 2nd and 3rd set in the Block, based on the current Wizards schedule. It is also 6 months before Rotation, and typically speaking, the beginning of Standard PTQ Season (this is the one we’ll focus on today). The second is October, It’s post-rotation, and State Championships are brewing (aka the only relevant Standard tournament in the fall).

The key staple Uncommons from Scars block are going to see their highest ever pricing this coming Summer. Now is just about the last chance to get in on them while they are affordable. Many of these I’ve been talking about picking up as throw-ins over the last year, and now I’m going to teach you my method for identifying winners.

Diversification
No reason to pick one Uncommon (like Dismember) and go all in. We want to be prepared for a metagame where maybe Dismember isn’t the hot card (seems unlikely, though). I’ve also mentioned Despise, as a possible late bloomer. If the format needs more disruption than removal, Despise could be the hot item. I doubt many will outclass Dismember, but Dismember doesn’t sit as low as some of these other cards, and it is likely going to be easier to move 4-5 playsets of 4-5 different cards than 20 playsets of Dismember. 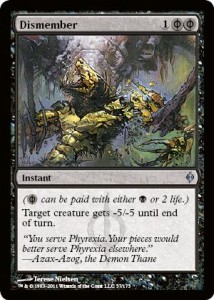 The goal is to identify 4-5 uncommons that are fated for rotation, that will see serious spikes during the Summer. Dismember, is all but a slam dunk, just like the Path to Exile or Bloodbraid Elf of years past. I still like Despise in this group, because the risk is so small. But are there others? I think there are quite a few Playable uncommons, but I want to look at ones I think have the best chance of spiking. Mostly these are Phyrexian mana spells, as they can slot into so many decks. Act of Aggression and Gut Shot are really inexpensive right now, and I’m stocking up readily. These two are problem solving cards, and there’s no guarantee they end up being the right answer, but since both can be found well under $1 per playset, the investment is minimal, and could easily grow by 500% at the right time. Other uncommons on my radar are Necropede, Contagion Clasp, Exarchs (R/U/B varieties), Go for the Throat, Beast Within, and Dispatch. We want a collection of 4-6 that would be strong in different types of Metagames. This is why I’m shying away from Go for the Throat and Dispatch, but still watching them. The removal spells that are most versatile are Dismember, Act of Aggression and Gutshot, as they go in more decks. Despise will be my disruption choice, and I’ll combine that with Entomber Exarch, and I’m giving Beast Within the nod because it’s a great catch-all answer. Rounding it off with Necropede as a long(er) shot, as a great utility card that has usage in and against lots of decks, beats protection from colors, snipes at x/1 creatures, and supports an Infect deck. This makes my personal list 7-deep. When I attend my first standard PTQ, i hope to pay for all my events of the season by dumping multiple sets of each of these cards. The cards that are still under $1 per playset could profit you as much as $3-5/set, while the more expensive ones may only double in price. Keep in mind, especially with the cheaper cards, you’re looking to hit maybe 2 out of 4, and still make a profit. Make sure you don’t extend yourself too thin, or there wont be enough winners in your batch to offset all the losers. They can’t all win, but by diversifying, you put yourself in a good spot to be a winner on ‘em all as a whole. The ones I’d say need to be in consideration for sure are Dismember, Despise and Gutshot. The rest, use your own Metagame analysis when spoilers for the next set come out to do your best predicting, so you can be the first one to jump on the movements.

As I adjust my selections, I’ll make updates here, but make sure you have your “Inquizition of Kozileks” to dump at the prime time this summer.

See ya next week!
Chad Havas
@torerotutor on Twitter

4 thoughts on “Insider: Pick Some Winners”