I used to be a gambler a few years ago. In the literal sense I would go to the local casino every month or two and try my hand at table games to double my money. I am also an inherently logical person–show me the numbers and I will attempt to make the decision that makes most sense.

One day I came to the realization that my gambling habit was irrational. In the long run, casinos always win. What is the sense in even trying?

After a couple years working in the “real world”, I turned my focus towards Wall Street. One of my favorite aspects of the market is that, as long as you have faith in humankind (all philosophy aside), stock in profitable companies will pay out in the long term. Since then I have built a diverse portfolio crossing multiple sectors and nearly twenty different companies.

As I continue to morph my stock portfolio, I frequently wonder if there is a parallel between viable strategies on Wall Street and trading strategies in Magic. It's likely that there are some cards that behave much like stocks on Wall Street. On the other hand, however, is it possible that trading some Magic cards for profit is similar to going to a casino? Driven by luck and largely out of my control in the long run?

The game itself is vastly diverse. Through various formats, printings, and desirability, the game has striated into different types of cards. A natural outcome is that some of these cards fit a long term investment strategy while others are more driven by luck.

Because I consider myself as a logical person, my intent is to slowly shift my portfolio to the steady performers. But before I can balance my card portfolio, I need to first understand how to classify each card.

Most readers of this column are familiar with the concept of “Blue Chip” stocks on Wall Street. This same classification can be applied to a handful of Magic cards as well. These include Dual Lands, the Power 9, and other valuable/powerful cards on the reserve list unlikely to be impacted by bannings. In a less traditional sense, I would also classify sealed, out-of-print product here as well, since their values are generally stable with a gradual upward trend as supply diminishes.

While these cards should absolutely be a part of every Magic Card speculator’s portfolio, they are rather uninteresting to talk about. Their slow and steady growth is predictable over a long enough term and this stability can act as a foundation to your portfolio. Let me instead discuss three other types of card investment opportunities and provide some examples of each.

Many Magic cards seem worthy of speculation, but at the end of the day they are largely equivalent to lottery tickets. My favorite examples of huge gambles are cards on the banned list. They can be compared to dollar scratch off tickets–cheap shots in the dark with high potential, but also having a low likelihood of significant payout.

Take a look at a card like Memory Jar (courtesy of blacklotusproject.com): 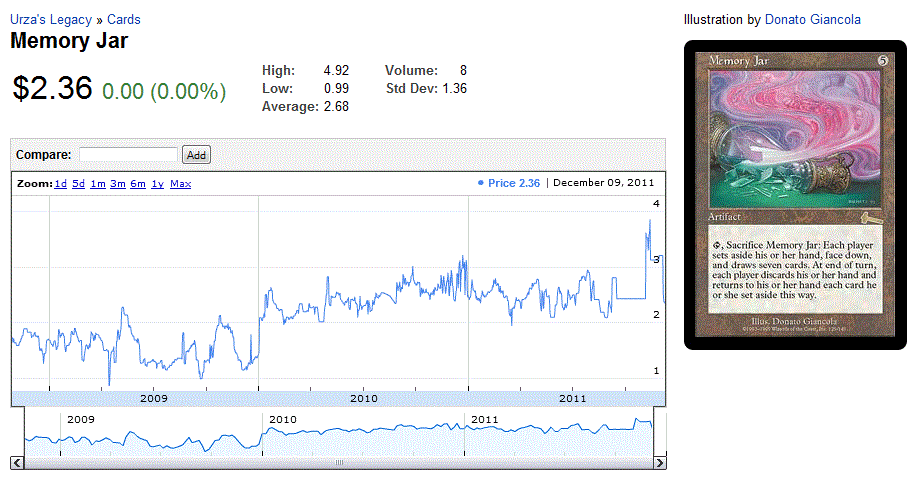 This overpowered culprit has been on the Legacy banned list since I became an active player a few years ago. With no loving home, this card is doomed to the back of people’s binders, trading in the two dollar range. But all of that can change overnight…

On December 20th, Wizards of the Coast will announce updates to the banned & restricted list. Should this card come off the list, it will follow a similar trajectory to its Urza’s block neighbor, Time Spiral (courtesy of findmagiccards.com):

This card experienced a near 10X gain within weeks! This is the equivalent of winning some green on a scratch-off ticket, in the world of MTG Finance.

My dilemma is whether or not catching this type of jump is worth trying on a frequent basis. Clearly this is a rare occurrence. Not only did Time Spiral have to be unbanned, but it also had to find a home in a Legacy deck ([card High Tide]which it did[/card]). This is not a frequent event, and while it does not hurt to own a few banned cards for casual play, having an entire portfolio of these cards in the hopes of hitting the jackpot is haphazard at best.

My advice to you would be to dabble in cards you feel are most likely to be unbanned but not to overindulge. It’s just not worth owning 100 Oath of Druids.

As you might expect, there is a continuum of risks at your disposal when it comes to speculation. There are cards which have a relatively significant potential but are not long shots on the banned list. For example, consider in this category cards which are known to be powerful but have not yet broken into a respective format.

Stoneforge Mystic is a great example, which I discussed a couple weeks ago. I often need reminding that this card did the same exact thing before Batterskull was printed, but it wasn’t until this living weapon came along that the card’s potential was truly maximized.

Since I talked about Stoneforge Mystic last week, I’ll mention a new one here. Consider the price chart for Dark Depths (chart courtesy of findmagiccards.com):

This card always had the ability to produce an indestructible 20/20 creature. And while Clockspinning was an available card, it was much too slow to give Marit Lage a fighting chance. Then along came Vampire Hexmage and the proverbial two-card combo came into being. Dark Depths shot up exponentially as evidenced in the price chart.

What makes Dark Depths different from Memory Jar? Simple. The former was always legal in Legacy, so the potential for this card’s power to be fully unleashed was always there. For the latter, everyone knows the card’s power but, unfortunately, Wizards of the Coast would prefer it be unavailable to Legacy players.

I would argue that speculating in Dark Depths carried lower risk of poor returns simply because it was always legal. If Memory Jar never saw Legacy play again it would not surprise me. But an uncounterable 20/20 indestructible creature was bound to hit tournament tables eventually!

At the end of the day, I would much rather maintain a sizable portion of this card category in my portfolio than the gambling category. Cards like Skaab Ruinator and Visions of Beyond come to mind. They are both extremely powerful, but they need a little bit of help in order to see tournament play.

The final group of cards on the risk spectrum I want to discuss can be compared to growth stocks on Wall Street. Everyone is familiar with Apple’s products, and their popularity has been reflected in the company’s stock price over the past couple years. Some Magic cards also follow a similar trend. And, while seemingly safe, often times these cards can be impacted by outside forces.

Some classic examples are the cards which become too powerful too quickly and are subsequently banned (or not). For example, Survival of the Fittest was a great speculation target at one point while its initial power was being harnessed (chart courtesy of blacklotusproject.com): 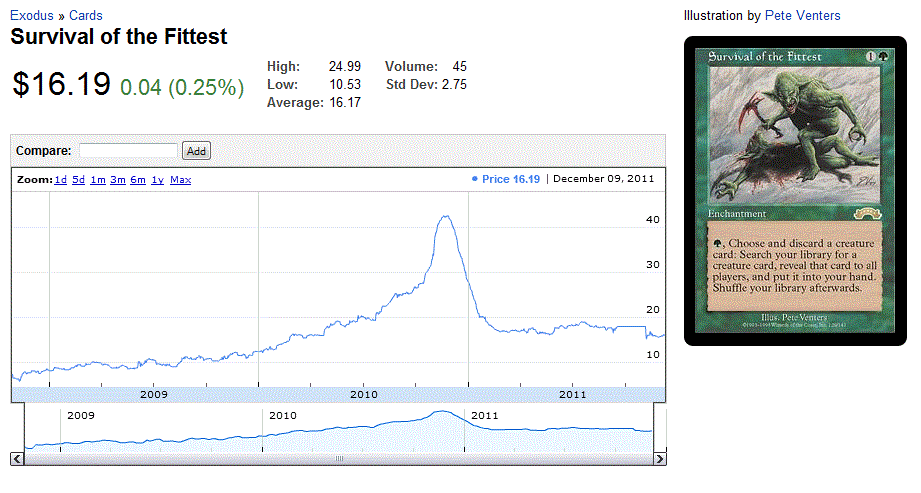 According to the chart above, speculators had over a year to acquire this card and make bank. Much like Apple stock, this card price soared very rapidly due to high demand. These cards rapidly grow in demand and they often attract attention. The trick here is to identify these growth opportunities, build your position, and sell when the card is overvalued. Note that this is not a direct parallel with Wall Street, as a government would not typically step in and stunt a company’s growth intentionally without good reason.

That being said, sometimes the growth of a stock price can also get ahead of itself, leading to a similar price trend. Google stock between 2005 and 2008 is a great example (chart courtesy of Yahoo Finance):

Much like Survival of the Fittest, Jace, the Mind Sculptor, Candelabra of Tawnos and many others, Google stock’s hype drove the price up a bit too rapidly, and a correction is also inevitable.

My recommendation on cards in this category is to buy as the hype starts and sell after the cards reach a particular price point. It doesn’t matter if you sell at the absolute peak–what matters is that you make profit. Sometimes you need to be satisfied with a solid return, even if the card value continued to go up further. Cards in this category won’t go up in value forever and there is often a correction in price that could take years to overcome.

It is often difficult to identify these cards early on because they are still being discovered. If their chart looks like the first half of Google’s stock chart above, it’s probably too late to buy. For some potential winners, consider cards like Stifle, Flusterstorm, or, even better, Spell Snare. These are seeing increased play in the current metagame. Spell Snare in particular has jumped recently and can reach as high as eight to ten dollars should Wizards continue to print [card Snapcaster Mage]Two Drops[/card].

There’s always an investment opportunity, both on Wall Street and in Magic Cards. But before you leap in, you should take a step back and consider what your portfolio should look like based on your risk tolerance. Are you the gambler, who wants to own multiple copies of every card on the banned list in hope of them becoming legal again? Or are you the slow-and-steady investor who turns profit on trendy cards and converts said profit into blue chip cards?

Your risk tolerance is a fundamental question to answer before you aggressively buy into any one thing in particular. Just like in the stock market, diversification is often key.

3 thoughts on “Insider: The Risk Continuum of Magic”