Everyone who's played more than a game of two of Commander has run into one of the many graveyard decks in the format. Whether the deck is a combo deck, an attrition deck, or some hybrid of the two, decks that use the graveyard as a resource are some of the most powerful and resilient in the format, and many people have a lot of difficulty interacting with this style of deck. In fact, Chris wrote in last week asking about exactly this issue. 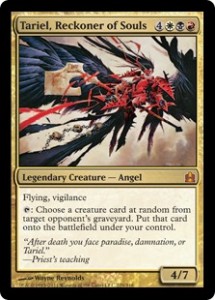 His metagame has a number of decks which rely on the graveyard as a resource. Mainly a Karador, Ghost Chieftain deck and a Glissa, the Traitor deck, both of which try to combo out of the graveyard as early in the game as possible. The problem that Chris has run into is one that many people have to deal with at some point or another. What kinds of cards are most effective against these decks, and how many do you need to run in order to solve the problem?

We only have to look as far as sideboards in Eternal formats to see this kind of issue reflected in a "real" metagame. Everyone knows that graveyard decks are good in these formats, but no one wants to dedicate the slots to beating those decks until the deck's prevalent enough that you're obligated to hate them out.

Similarly, in Commander, you only have ninety-nine slots in your deck and there are a lot of things you have to be able to answer. There comes a point where there's not much space left in your deck and Graveyard hate is usually the first thing to get cut. Because most people have this kind of mindset, it allows the graveyard decks to run rampant.

Now, what a lot of people are tempted to do is to build "hard counter"—a deck that discourages or outright prevents people from relying too heavily on their graveyard. Something like Chainer, Dementia Master and The Mimeoplasm. The problem with this approach is that these decks are overtly hateful, which means that good players will play around them. As someone who has extensive experience playing decks that abuse the graveyard, I can tell you that I frequently refuse to overextend my graveyard until I can kill the player or players who are most capable of disrupting it.

Enter Tariel, Reckoner of Souls. Not only is this guy in a sweet color combination that doesn't get nearly enough love, but he hates on graveyards in a very unique way—one that people won't take seriously until it's too late. Tariel encourages you to moderate the contents of other players' graveyards over the course of a game so as to minimize the randomness of her ability. She makes you actively want to run graveyard hate as part of your approach to the game rather than sacrificing slots for "real" cards.

Graveyard hate is where this deck has to start, right? Fortunately, Wizards has printed a glut of very powerful graveyard hosers in recent sets. It's also fortunate for us that many of these cards are cheap artifacts, which are easy to take advantage of. These, in conjunction with other cards that allow you to exile specific cards, will enable you to disrupt graveyard-based decks very easily.

Bring on the Hate!

This is the fundamental basis on which the deck is built. The most efficient ways to do that are with the pieces of artifact hate, and so those are what the deck is really built around. Because of cards like Salvaging Station, artifact-based graveyard hate is the most efficient way to control graveyards in a longer game. Even better, this means I get to build a little around Sun Titan, which is probably my favorite Commander card, bar none.

The more interesting cards, however, are the ones that can target specific cards in graveyards, so you can exile key spells and creatures, even at instant speed. These guys power up your cards like Scrabbling Claws and Relic of Progenitus, and let you leave more of the graveyard intact, so you can abuse it later. Those cards get better and better the fewer cards that are in that opponent's graveyard.

Both Stonecloaker and Nezumi Graverobber // Nighteyes the Desecrator love to be recurred with Sun Titan, which provide great targeted removal and absolutely huge upsides!

Lastly, Suffer the Past is a card that ought to see much more play than it does. It rips graveyards apart at any point in the game while being a burn spell in the late game. It's not as obviously game-ended as something like Exsanguinate, but it does the job just as well.

Now, these cards do a number of things, but they mostly tie together your Bauble engine with ways to control the board while developing your mana. Dispeller's Capsule and Executioner's Capsule are great ways to control the board, especially with the addition of Twilight Shepherd alongside your other recursion mechanisms. Expedition Map and Wayfarer's Bauble both help you develop your mana base consistently.

Liliana of the Veil is probably the least synergistic of these cards, but she is also the most powerful. In multiplayer, her first ability generates a ton of card advantage, and the ability to repeatedly [card Diabolic Edict]Edict[/card] people and take their guys later with [card Tariel, Reckoner of Souls]Tariel[/card] is very powerful. You can get value by discarding something like Krovikan Horror, but even then she has much less synergy with the deck than something like Necromancy.

Just think for a second about how Necromancy interacts with Twilight Shepherd.

Regardless of whether they kill Necromancy or Twilight Shepherd, you can get all your cards back and still have access to both of them. You can even do a similar trick with Nim Deathmantle in the place of Necromancy, but each iteration is more expensive. Similarly, cards like Phyrexian Reclamation and Tortured Existence are worth considering because they imitate your other recursion engines, though they are less powerful and more attrition-based.

While there are a number of generically good disruption spells here, most of them serve a very particular purpose. No Mercy, for example, is harder to deal with and easier to cast than Dread for a very similar effect. Similarly, the spot removal suite is filled with a number of top-tier removal spells and a number of worse-than-average removal. The reason for this is because I wanted to fit Sunforger into the deck, and Sunforger gives you a ton of utility if you're willing to run a few cards that are a little underpowered.

Lastly, Stranglehold and Price of Glory are your way of making Blue decks play fair. Most other colors rely on the graveyard or on creatures to some extent, so you can interact with them along the deck's primary axis. However, Blue decks interact primarily on the stack, which is something that this deck will have trouble with.

I briefly mentioned Sunforger's role in the deck construction process. White-based decks always tend to have a suite of Equipment, since the color is very creature-based and Equipment powerful engines can be easily tutored up. I'm not sure whether Stoneforge Mystic, Stonehewer Giant, or both would be best for this deck, but when in doubt I tend to choose the less expensive card.

Swiftfoot Boots, Lightning Greaves, and Darksteel Plate are there just to make [card Tariel, Reckoner of Souls]Tariel[/card] more difficult to deal with. Haste and protection are two abilities that Tariel desperately wants, and these are likely the best cards to give it to her.

Anyone who's read anything of mine before will know about my love affair with Nim Deathmantle and I already mentioned Sunforger, so I won't linger on those. Basilisk Collar is not only a generally good card, but it also interacts very well with both random utility guys and Krovikan Horror.

Finally, we've got some much needed card advantage and some ways to tutor up game-winning enchantments and non-basic lands. In addition to that, there's some sweet creature-based removal.

Angel Despair is the most generic of these, but Archon of Justice is probably the most powerful, considering this deck runs a number of sacrifice and recursion engines. Capricious Efreet is here to fit into loose theme of pseudo-random effects.

For those unfamiliar with the interaction, Capricious Efreet is pseudo-random because you can choose up to two permanents you'd like removed and one of yours. Then with the trigger on the stack, you sacrifice your permanent. When the effect resolves, it will randomly chose between the one or two remaining permanents.

Last, but certainly not least, Anger is another source of Haste, which is very important for enabling [card Tariel, Reckoner of Souls]Tariel[/card] and for giving this deck a sort-of-infinite combo with Breath of Fury!

Solitary Confinement isn't nearly as powerful as Breath of Fury, but it can create a soft lock in conjunction with either Sun Titan or Twilight Shepherd. You can also just pay for the upkeep each turn with a card like Krovikan Horror or Phyrexian Reclamation.

This deck is incredibly mana hungry and the amount of artifact acceleration here should demonstrate that, especially given that I don't tend to run very many mana rocks. However, this deck is already incredibly slow and a suite of the best acceleration in the format will do a lot to alleviate that.

Unlike in many two-color decks, I'm counting both Cabal Coffers and Thawing Glaciers as spells rather than lands. Neither of these can produce mana on their own and both are very slow without their requisite combo pieces (Urborg, Tomb of Yawgmoth and Deserted Temple, respectively). Consequently they feel more like spells that cost a land drop instead of mana.

This is far and away the most fragile part of the deck.

Three color decks that aren't base-Green generally have quite a bit of trouble with mana fixing, since you tend to rely on fragile artifacts to get it done. This deck isn't terribly reliant on artifacts, but it's also very short on dual lands, fetch lands, and pain lands, all inclusions which would improve the mana by a significant margin. That said, the [card Fetid Heath]Filter Lands[/card] are some of the best lands you can have in a deck like this, since they allow you to cast double-colored cards of either color they can produce, even if you only have zero sources of one of the colors.

High Market and Phyrexian Tower are the two most interesting lands here that haven't been discussed before. They're mostly here to enable your recursion engines and to allow you to rebuy your opponent's "Enters the Battlefield" effects. Similarly, Mistveil Plains allows you to rebuy instants for Sunforger.

With that finished, let's take a look at the finalized list!

All in all, I think that this is a pretty solid starting point. You may have to tweak the amount and type of graveyard hate. This might have too many "sweepers" like Nihil Spellbomb and not enough "spot removal" like Withered Wretch, but I think this is pretty close to correct.

That said, the real question is whether or not Tariel is capable of winning the game on her own or whether there will be too much removal for her to take over the game. This may necessitate the addition of cards like Shield of Kaldra and Indestructibility, but only time and testing will tell.

Be sure to check out next week's article, where I take Zedruu, the Greathearted for a spin!

2 thoughts on “Tariel, Wrecker of Graveyards”