Click here and stay up to date with all of our Dark Ascension spoiler analysis!

The Dark Ascension spoilers continue to come at us in rapid fire. In an attempt to keep up, I'll take you through some of the latest spoilers and talk about their potential relevance.

Much like Corbin did for the first round of spoilers, I will take you through each of the most recent cards and focus primarily on financial trends. This is related to two main factors: playability (of course) and hype. 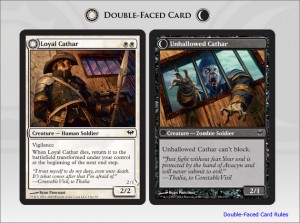 Even though this guy is a common, he represents an exciting new way the transform mechanic works. It's almost a hybrid of undying and transform in one card! Will he ever be valuable? Of course not, though he is a decently costed human that comes back for free. Take that removal! If he sees play in an aggressive humans build, foil versions could potentially trade at a buck or two. If only he came back a human as well! In any event, I hope there are uncommon and rare versions of this die-then-come-back-a-zombie mechanic! 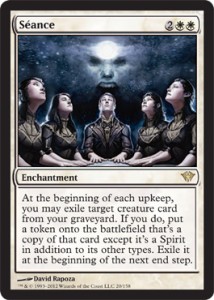 Next card on the list of spoilers is Seance, and, to be honest, I am a bit perplexed by it. I feel like Wizards forgot to add one line of text to the card: "that creature has haste". Sure, it's awesome that I can make tokens on my turn AND on your turn. My guy can even be a blocker for your attackers. But to never be able to attack with these tokens makes this card a little trickier to take advantage of.

There are two obvious ways that this card can create synergy. First, if the creatures you are returning have a come into play effect. How sweet would this card be with something like Nekrataal? Having this card in a Humans deck and triggering Champion of the Parish twice for any creature that dies is also really sweet.

Second, having a sacrifice outlet available to bin the tokens to after they've worn out their welcome. This can fuel a decent array of interactions, though I'm not sure if there are any current Standard decks that would benefit greatly from this.

Value-wise, I don't see this card making a splash. It may be able to enable some neat effects, but I don't see a deck outside (maybe) Humans wanting to run this card. The other major White creature deck is Illusions and they would rather be making [card Moorland Haunt]1/1 flying Spirits[/card] that stick around instead of having a Phantasmal Bear in play for one turn. 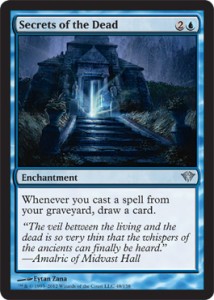 Burning Vengeance has a partner in crime by the name of Secrets of the Dead! With the two out at once, any time I flashback a card I ping for two and draw a card? This powerful duo reminds me of a different dominating duo of enchantments from back in the day. Anyone remember Astral Slide and Lightning Rift? This combination of cards made for a potent constructed deck. Do I see Burning Vengeance and Secrets of the Dead following the same path? It is very difficult to say. As of today, there are only so many cards that are cheap enough to flashback to not be resource prohibitive. But it certainly will be fun to try it out!

Financially speaking, this Uncommon won't go very far. What's more, most of the cheap flashback cards are also Commons or Uncommons. One possible play on this deck archetype would be Sulfur Falls. This Innistrad Dual Land will see play in any deck that attempts to run these two side by side. 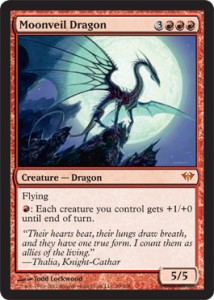 While a hit with casual crowds, these heavily costed beaters are more for show than anything. At six mana, for example, is this card better than any of the Titans?

I would argue "no" for one very good reason: his toughness is 5. Did Wizards forget they just printed Dismember? Probably not, but there are way too many ways for Moonveil Dragon to die before it ever becomes relevant. And in aggressive Red decks where the mana curve normally ends at [card Koth of the Hammer]four[/card], the chances of this guy seeing constructed play is zilch. Look for his value to trend similarly to other mythic rare dragons and angels. 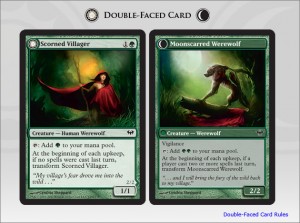 This common Human Werewolf (not elf?) is rather solid. She'll help ramp your mana and, if given the chance to flip, will give you a 100% return on your mana investment every time she taps. Will she be impactful enough to impact the Standard metagame? Likely not by herself. I'm going to place this card in the "great for drafting Werewolves but not for constructed" category. Along with the other [card Avacyn's Pilgrim]mana-producing creature[/card] in Innistrad block. 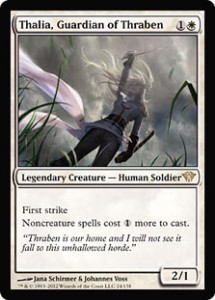 The last official spoiler I want to discuss today is the newest hate bear, Thalia, Guardian of Thraben. There is a good deal of buzz on this Legendary Human on Legacy and Vintage boards. Having an effect similar to Thorn of Amethyst while also having a 2/1 first strike body is not irrelevant. She may even see some play in a Humans build, since these decks normally run many creatures. That being said, hate bears often fall within a very narrow price range of three to five dollars. Thalia is pre-selling on Star City Games right in the middle at four dollars and that seems appropriate.

If she warps the metagame, her value will increase. If not, don't expect to see her value move much.

One final observation is that the "Humans" theme is becoming significant. This archetype will certainly have a place in post Dark Ascension Standard. As a result, it would not be a bad idea to pick up a set of Champion of the Parish and Moorland Haunts while they are cheap.