When Sorin, Lord of Innistrad was spoiled last Wednesday, a thought occurred to me. 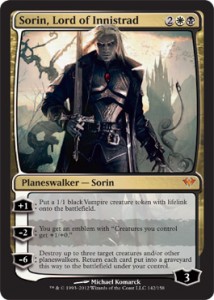 First of all, I the card was really well designed and I need one for my Ghave EDH deck and for my Vish Kal EDH deck. After that thought churned through my brain, I started thinking about if the baddest Vampire Planeswalker on the block had any Standard and other applications.

I began scouring Twitter and Forums to see other people's opinions. The general consensus was that a BW token deck could potentially spawn from Sorin's power level alone, and yesterday's Vault of the Archangel seems to fully support that.

So everyone was off to the races on speculation. Where was Sorin going to end up in terms of presale price? What other cards would this affect? Was this deck legit or overhyped? The price of Isolated Chapel tripled on MTGO overnight as everyone tried to jump in on the hype bandwagon, hoping to flip a few cards once they had risen in price.

This is what the title of the article, Collateral Damage, is referring to.  Sorin was spoiled, and as an effect of his impact, collateral on other cards began to shift. People love to play with strong cards and people are going to make him work if at all possible. Being able to predict what cards will be affected by collateral damage can result in quick profits if you can accurately identify these gainers.

More than just new set releases can cause collateral damage, though these are typically the easiest to predict. Card bannings and unbannings, the creation of new formats, the rotation of Standard cards and what decks the top pros are playing can all affect prices of cardboard besides the specific cards being removed or added to formats. We can look at historical examples to try to get an idea of what to look for in the future and apply this knowledge to the remaining spoiler season.

The Release of New Cards

There was  a time when you only had to worry about new cards coming out four times a year. Things are a bit more complicated now. 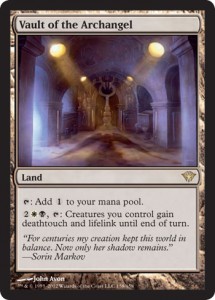 Not only do we have the four sets a year set up, but now Wizards has started releasing new cards in casual sets such as Commander and Planechase. If we are hoping to make our money in the MTGO market, things can get even more complicated. With the occasional Masters Edition and the release of older sets, there can be a significant number of cards being released that can shake up prices.

Sometimes the gainers are easy to spot and can turn a profit immediately, such as what happened with Isolated Chapel and Sorin. Other times it takes someone breaking a card open for the Magic community at large to catch on and for cards to change in price.

When Sword of Feast and Famine was released, there was debate of just how good the card was. Stoneforge Mystic sat quietly in the corner, waiting for its time to shine, sitting at a very low price tag. The mystic had seen a bit of play the previous Standard season in Boss Naya decks, but once she could start picking up serious equipment, her price exploded. We all realize now that Stoneforge Mystic is a broken piece of cardboard that can wreck formats, but it took the printing of the right equipment to make her price really hit the big leagues, topping out at around $30 prior to her banning and reprinting.

New cards can affect collateral damage in negative ways too. Before Mental Misstep was released, Aether Vial was a safe investment that floated around $20.

Vial decks became nearly unplayable as Blade decks took over and Aether Vial's price plummeted. SCG currently has the card listed $11.99 despite there being a new format for the card to be played in. Again, this was an obvious example with big name cards.

What about something a bit more subtle?

Go for the Throat was a stellar removal spell that showed up in a large number of staple decks but has all but disappeared now, its price taking a dive as well. The release of Dismember invalidated it as a strong removal spell, giving people an excuse to move out of Black for their removal since it could be had in any color.

Where does this tell us to look at when we're watching new cards get spoiled? We want to be looking at cards that have been underutilized, cards that needed a bit more push to hit it big. Stoneforge Mystic needed a strong piece of equipment. Knight of the Reliquary broke out once we had fetchlands. Sorin could make strong token producers like Elspeth Tirel show up in the limelight once more.

The card I'm banking on currently is Mayor of Avabruck // Howlpack Alpha.

With a second lord effect in "Everwolf" (cards only spoiled in German at moment) and an incredible beater in Huntmaster of the Fells // Ravager of the Fells, Werwolves could be poised to be a Tier 2 strategy and Mayor is the strongest card in Innistrad for this deck.

If the wolves do even remotely well at a tournament, look for him to jump. The prevalence of Gut Shot is the thing holding him back the most, but anyone who has resolved a turn 2 Mayor unanswered before he flips knows just how strong this guy can be.

Bannings take place four times a year and only then, short of some HUGE oversight.

These are the nights to stay up late, find the vendor who isn't shutting his site down, and pray he doesn't try and stiff you the next day. We've all seen the run up on cards that were unbanned in situations like Time Spiral's, but any deck that is helped or hindered by the ban can affect card prices all around it.

Let's look at Time Spiral again as it has one of the most high profile price shifts in recent memory. I'm not talking about the card, though jumping from around $5 to about $30 in one night is impressive.

I'm talking about Candelabra of Tawnos.  Using Black Lotus Project, we can monitor the cards ridiculous ascent. While it was a pricey card to begin with, being an old powerful card on the reserved list, the card could be had for around $30-40 dollars until Time Spiral was unbanned. The card then rose steadily as rumors of a High Tide deck surfaced until it was around $70 dollars in early March.

Then the deck actually showed up at an SCG Open and posted fantastic results and it took off, doubling in price to around $150 in three days, continuing up to $200+ over the next few weeks.

A card going on the ban list can affect other cards prices as well. When Wizards finally pulled the trigger on banning Jace and Mystic in Standard, everyone tried to jump back on the Valakut bandwagon.

It was believed the deck would return to its dominant run in Standard without the two best cards in Caw-Blade keeping the deck down. It turned out that the cards Caw-blade used to beat Valakut weren't what was banned, but it was Primeval Titan, which had tapered off quite a bit since Caw had begun to rise, which saw a sudden leap in price after the announcement.  The card's price would come back down to earth as people realized Valakut wasn't back and once it was eventually reprinted, but public opinion and the run up on the card granted a window where one could make a large sum of money.

Things to learn here are that if you pay attention to a format, you can potentially predict what to get into or out of.

If a format is being choked to death by a particular strategy, you can identify what may be removed from that strategy and what decks that frees up. Picking up on P-Titan granted a window that allowed an immediate gain to be made. While less easy to predict, unbannings can have the same affect.

The best plan is to camp out near the computer the night of the scheduled banning and unbannings and decide what is affected by the news. If you can predict it before, you can gain a significantly larger advantage. But as long as you are awake you stand to have a chance. Pay attention to people like Patrick Chapin and Aaron Forsythe in the weeks leading up to bannings, as Chapin tends to have a good grasp of what may or may not be banned and Aaron knows before hand and is very involved in the community.

This article is already hitting the 1500 word mark, so I'll bring it to a close for now. I tried to break things down as best I could and give some advice on what to look out for, but a lot of this has to be gut instinct or based on what the people in the know like Kelly Reid or Jonathon Medina have to say.

Medina is now out on his own and posting a large amount of financial advice on his Twitter, and here at QS you have the opportunity to get some of the thoughts from best people of expertise on this exact topic. Pay attention to what everyone's saying and make a decision.

The biggest thing I hear people say is "I should have invested in card X". In order to make money in this game you must buy or trade for things you see as having future value. Pay close attention to the rest of the spoilers this season and see if you can find a card you think has potential and pull the trigger. I may still talk about the influence of pros on cards prices and how the creation of new formats and rotation of old sets can also affect prices.