Every so often it is wise to reassess one’s collection and identify which cards are performing as expected and which are falling flat. Usually, I perform this evaluation every time a significant change in MTG happens.

Well, over the next couple weeks there are going to be a couple of these changes. First, Dark Ascension is going to be released and become Standard legal. This set, while seemingly underwhelming to some degree, will still have an impact on the Standard metagame.

Second, Modern season will commence. This format is wide open at the moment thanks to all the recent bannings, and I anticipate some hefty price swings as a result. 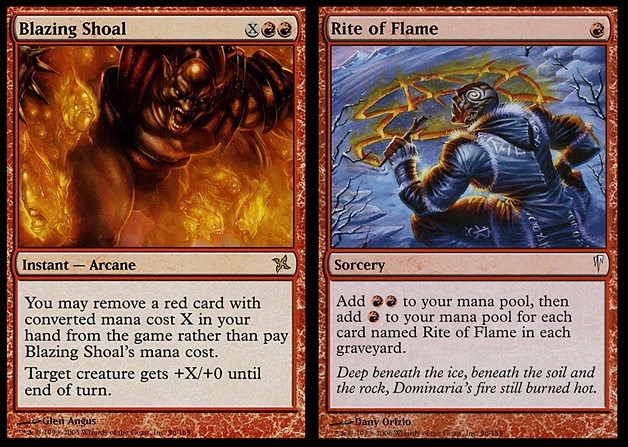 A few themes from Dark Ascension immediately jump out at me. First, it seems that a B/W deck is inevitable. This includes the printing of Sorin, Lord of Innistrad along with many synergistic humans and a Vault of the Archangel.

Second, it seems that Wizards is again pushing for a B/R Vampires deck in Standard. Such a deck may remain underwhelming, but having the ability to run premier removal alongside Olivia Voldaren and Falkenrath Aristocrat is a strategy worth at least considering. Perhaps a third color splash could even make the deck more viable.

Finally, Dark Ascension is continuing to drive home the importance of the Graveyard. But this emphasis is not consistent in strategy. For example, a card like Ghoultree synergizes well with Kessig Cagebreakers and the likes of Armored Skaab, Deranged Assistant, and Forbidden Alchemy. Meanwhile, cards like Skaab Ruinator aim to thin your Graveyard, making these two themes incompatible.

Knowing all of this, I have what I need to make an educated evaluation of my speculation targets over the past couple months. In all honesty, some cards I have acquired will likely not pay out as expected. On the other hand, some cards may still have potential.

The most obvious change in mindset involves poor Skaab Ruinator. Before Dark Ascension spoilers began, I had enough confidence that this 5/6 flier would synergize so well with this set that I picked up a playset. Fortunately, I kept my speculative buying of this card in check and I managed to keep my average purchase price to less than four dollars each. After testing this card myself and witnessing how awkward it can be in light of Dark Ascension, I have decided this card is no longer worth having. He is very powerful, but it is SO AWKWARD to play him more than once in a game.

Meanwhile, on the bullish side I still really like the Innistrad Dual Lands (chart courtesy of blacklotusproject.com). 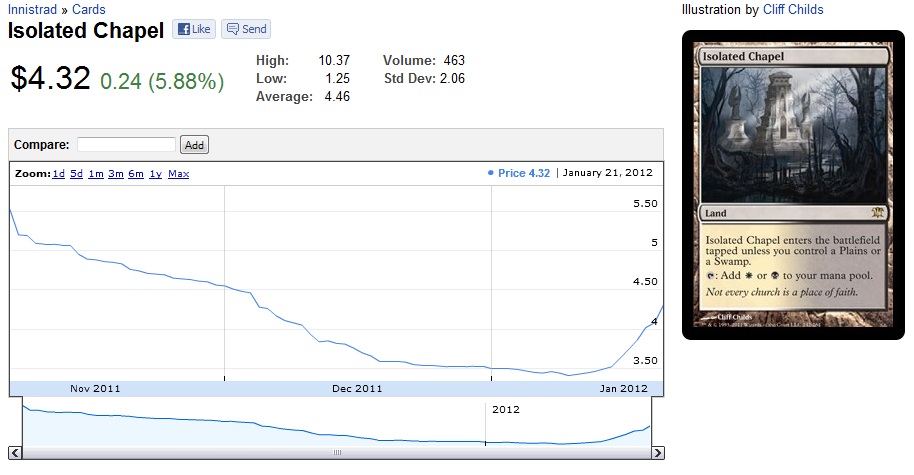 Just two short weeks ago I emphasized how these cards were all hitting their bottom. Thanks to Sorin, Lord of Innistrad, Isolated Chapel has seen a bump sooner than the others. Star City Games now sells this particular B/W land for $7.99. This is not the ceiling.

The other Innistrad Dual Lands haven’t yet responded this drastically, mainly because their utility in the new Standard is less obvious. But do not be deceived. These lands will be in Standard for quite some time still, and there will be plenty of opportunities for the format to shift direction, driving up the price of some of the other Innistrad Dual Lands. If you don’t have your sets, I would highly recommend you move in while these cards are near a bottom.

I have also begun acquiring Innistrad cards that synergize well with having cards in the Graveyard. I like Kessig Cagebreakers and Splinterfright in particular. Both cards sell for around $0.40 each and may become fringe playable when Dark Ascension becomes legal. And while I commend my colleague for purchasing 94 of them (https://www.quietspeculation.com/2012/01/a-frightful-tale-my-speculation-story/), I most likely would pick up just a couple extras as trade throw-ins.

The final card I want to mention in Standard is Visions of Beyond (chart courtesy of blacklotusproject.com). 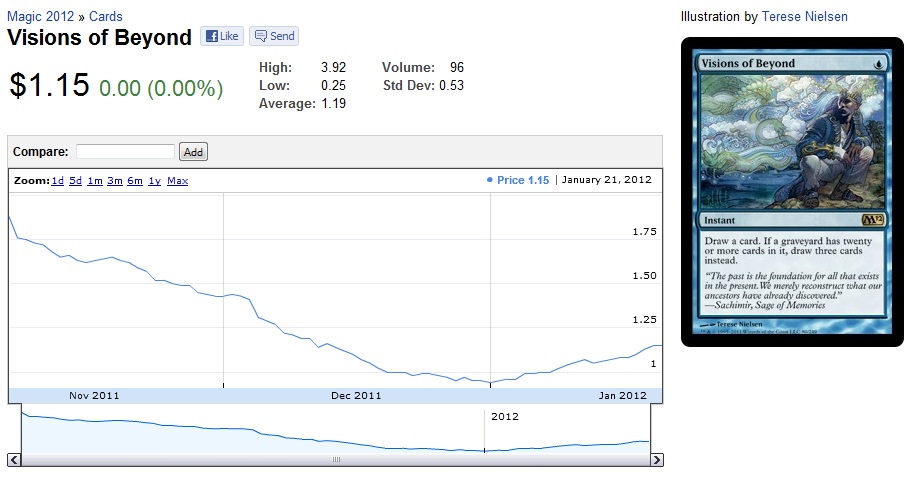 I made a call on this card a while back, indicating possible synergies with the Graveyard themes of Innistrad and Dark Ascension. Clearly, the card has not broken out in any measurable form. However, a clear bottom has occurred in the above chart and every Graveyard card spoiled (e.g. Increasing Confusion) gives me slightly more hope for Visions of Beyond. I have my set and I may trade for a couple more. But my rating on this one for now is “hold”, as there seems to be some better opportunities elsewhere.

Modern season is upon us and now is the time to pay very close attention to shifting metagames for potential pick-ups. For example, I have read some buzz on Twitter about a Merfolk deck once again becoming viable. Chris Davis from Channel Fireball has even taken a Merfolk build through a Daily Modern Event on MTGO with decent success. Wizards may have finally banned enough cards to make this strategy viable.

Another trend that seemingly popped up overnight is the mono-W lifegain Martyr deck. Taking a page out of an older Extended deck, this brew strives to gain giant amounts of life and implements Serra Ascendant for major life-swinging beatdowns.

Other noteworthy Modern deck brews include a return of Jund, the ever-present Past in Flames storm decks, and my personal favorite, Melira-Pod. Each of these decks appears to have a home in this tumultuous Modern metagame.

Naturally, as Modern evolves and stabilizes there will be some windows of opportunity for profit. On the other hand, some previously well-positioned cards may have fallen out of favor.

In fact, one card that I have recently scaled back on buying is Past in Flames: 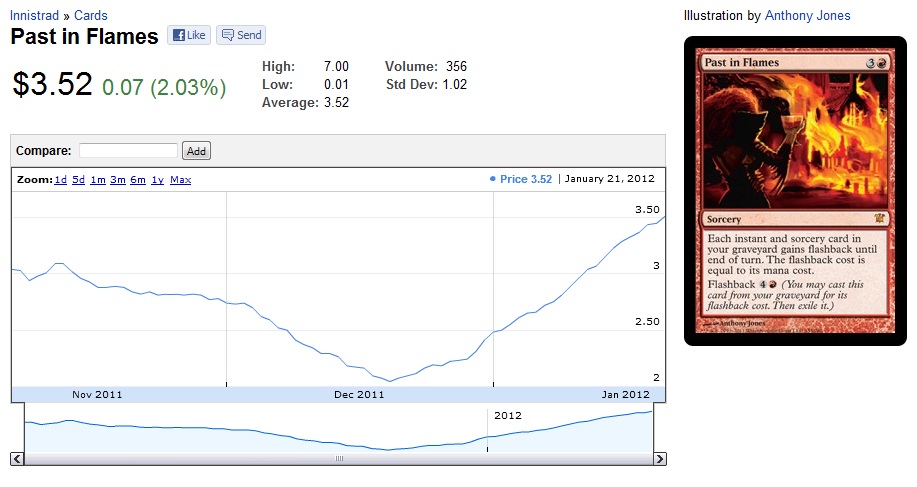 I admit to purchasing 14 copies of this card in a heartbeat when they dropped to $3 apiece. They have made a reasonable rebound, but seeing a card like Graftdigger's Cage spoiled in Dark Ascension has immediately turned me off. Additionally, players have begun playing Ethersworn Canonist in their main decks making the uphill battle with this card even more daunting. Do I see this deck impacting the metagame? Absolutely. Will I hold onto a few? At $3.50 each, why not? Have I sold most of the 14 copies? You betcha. I am way too risk averse to ride this card much further.

What should I do with the cash made from selling my Past in Flames? I should focus on purchasing cards with better potential upside, of course! With the resurfacing of Merfolk strategies, I like Aether Vial (chart courtesy of blacklotusproject.com). 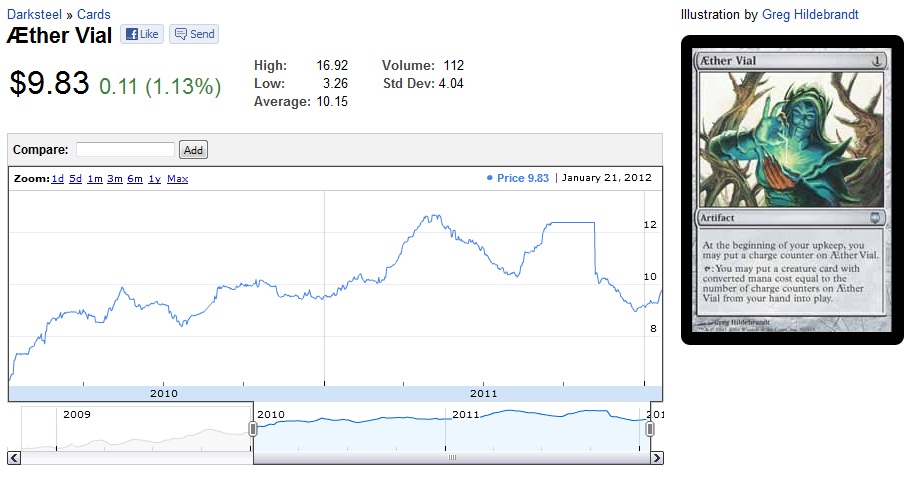 This card peaked over $10, but has since traced back into single digits. Many creature decks will benefit from playing Vial, but Merfolk decks in particular love playing free, instant-speed creatures while holding up counterspells.

Speaking of counterspells, which versions do we think Merfolk may run? It is hard to predict so early in the season, but I would like to nominate Cryptic Command. It will probably never reach its Standard highs of $20, but the card commonly sells on eBay for $11 and could reach as high as $15. If anything, this card will remain easy to trade for and away for as long as Modern is a format.

There are so many other cards with potential in this format that it is difficult to name them all. If Black finally becomes a relevant color in Modern, cards like Dark Confidant, Thoughtseize, and Maelstrom Pulse all become strong buys. In fact, these three in particular have already seen a small rebound in price. Maelstrom Pulse in particular may already be a wise card to acquire because of Jund’s popularity.

Significant events in the MTG community such as new set releases and PTQ seasonal changes all merit a re-evaluation of trade strategy. Ignoring these forces is not recommended. Sometimes it is wise to sell some cards for a loss that did not pan out rather than holding them all the way down to bulk rares in the hopes that they see play.

I myself have purged my Skaab Ruinators and Past in Flames in light of these recent events. By selling now I manage to avoid significant losses, enabling me to purchase cards with greater promise. If I don’t do this I would be throwing good money after bad – an unwise business practice.

14 thoughts on “Insider: Rebalancing Your Portfolio”