At first glance, Dark Ascension appears to be underpowered relative to recent sets. Some people have gone as far to say that the set’s value is lower as a result. I, too, have reacted in this way.

Perhaps it was naïve of me to assume there would be very little in terms of financial relevance in Dark Ascension. So I’m taking a step back to reassess things. Statistically speaking, it seems highly unlikely that every card from this newest set other than Sorin, Lord of Innistrad will be destined for the dollar bin.

As of the time I am writing this article, there is really only one notable tournament that highlights the beginnings of Dark Ascension’s impact on Standard: Star City Games Richmond. Naturally the first thing I want to do as part of my reassessment is to consider what new cards have been making a splash.

Standard always goes through a period of transition when a new set is released, and this is no exception. Even though Dark Ascension’s power seems underwhelming upon first glance, I still need to have respect for potential new archetypes. That being said, I need to be very careful.

I only managed to attend one Star City Games tournament in 2011, in Indianapolis. At that time, Mirrodin Besieged had just been released and it was the first weekend where this set was legal. Cards like Go for the Throat and Black Sun's Zenith were exciting people all Saturday morning. But there was one card that fetched even more attention that day. (chart courtesy of blacklotusproject.com) 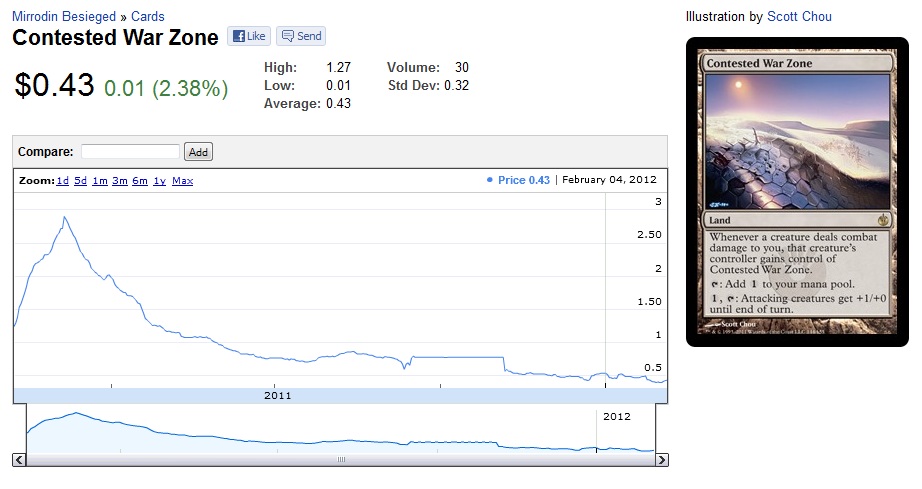 The card was Contested War Zone, and it was exchanging hands on site as high as six dollars. Thanks to this card, Kuldotha Red became a tier one deck on that day. I remember starting 2-0 at that tournament before getting smashed round 3 by this deck, even losing on turn four of game 2 thanks to some mana screw.

A quick look at the above graph shows how evanescent Kuldotha Red’s tenure in Standard truly was. In fact, the deck is still completely legal in Standard, yet Contested War Zone now sells for less than $0.50 on eBay. There is a valuable lesson to learn from this anecdote – one successful tournament when a card is brand new does not imply a promising speculation buy.

Right now the time is 6:42pm on Saturday, so the Star City Games tournament has not reached Top 8 yet. Therefore, there are no published lists yet (I’ll come back tomorrow to check the lists and update this article, don’t worry!). Since I have been busy most of the day, I have been unable to watch the live coverage. For now, all I have to go by is this short paragraph on Star City’s homepage:

The StarCityGames.com Richmond Open Series is winding to a close, and it’s been an eventful Saturday so far. Heartless Summoning has suddenly begun turning heads, powered by Dark Ascension’s Havengul Lich and a number of large creatures. National Champion Ali Aintrazi is piloting the deck, but he’s not alone… Control and aggro are both showing up in strong numbers, with Dungrove Elder, Champion of the Parish, Delver of Secrets, and Geralf’s Messenger headlining new aggressive strategies—Mono-Red has some competition!

Based on this assessment alone, it seems like Heartless Summoning has become a card thanks to Havengul Lich. Additionally, Green aggro decks may finally have breached tier one status, though it’s not clear why. Dungrove Elder has been around for a while so there must be some other factor. I’ll have to dig further when I look at the lists tomorrow. 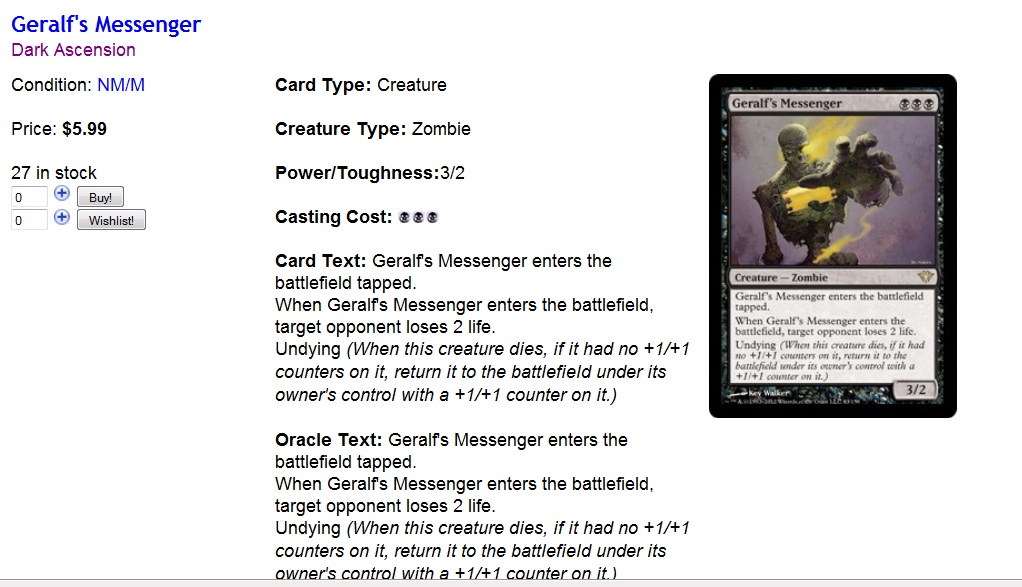 Checking Star City’s stock, it seems that there are 7 Havengul Liches in stock at $14.99 and 27 Geralf's Messengers in stock at $5.99. But as tempting as it is, I don’t believe it’s time to buy.

I’m going to wait until Sunday to see the Top 8 deck lists and to recheck stock on these cards. While I have to actually wait until tomorrow morning – over 12 hours – to see these lists and digest them, you merely have to scroll down…

It is now 9:30am on Sunday – let’s see how Dark Ascension’s cards have done.

Where Have All the New Cards Gone?

And our Top 8 decks include:

So it appears the Heartless Summoning deck and Mono Green decks managed to make Top 8! They unfortunately lost in the quarter finals, but they still earned some level of respect.

Turning my attention toward Dark Ascension cards, there is some evidence that supports many speculators’ initial hypothesis – these cards may be underpowered in this Standard format. Only five unique cards found their way into the Top 8 main decks, with the only rare/mythic being Havengul Lich.

What Does it all Mean?

The format is still in its infancy. There will be months of time during which Pros and Amateurs alike will be brewing up new ideas. As of right now, though, I see very little reason to jump in head first on speculations from Dark Ascension. In fact, I would be much more inclined to pick up Tempered Steel cards and Mono Green aggro cards before moving into anything from Dark Ascension.

It’s interesting to note that there was no card similar to Contested War Zone within Dark Ascension. Or if there was, it certainly had no real impact on the format. Yet.

Before I close I want to revisit the two cards I looked up on Star City’s website to see if the price and/or quantity changed. 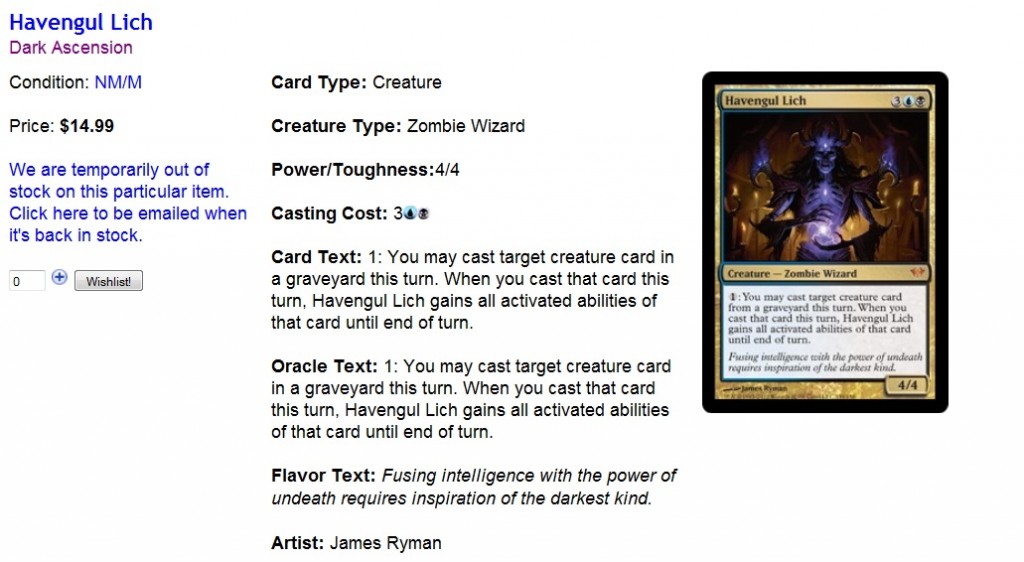 I am so excited that this little experiment was informative! In about fifteen hours, Havengul Lich moved to sold out status on Star City Games. It won’t be long before they increase their price to $20 as a result. My advice: if you can trade for them at $15, it couldn’t hurt too much. But I would certainly not rush to Star City Games as soon as these are back in stock and buy them out. As I learned from the Contested War Zone fiasco, one successful stint in a young format does not make a card a hit. 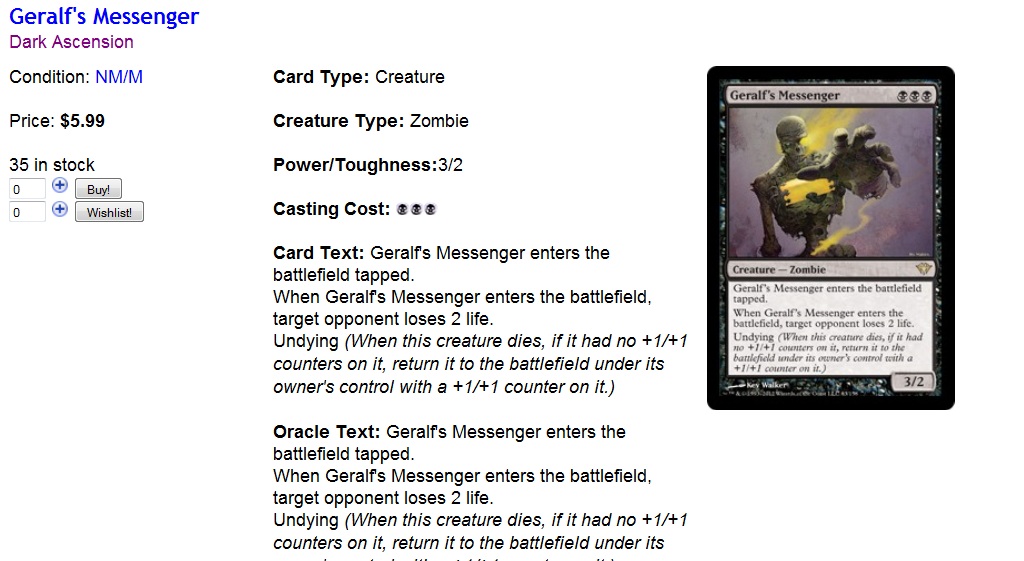 I can make an interesting observation here as well. After getting some hype from Star City’s own website, the card did not make any splash in the Top 8 of SCG Richmond. Result? The stock on this card increased from 27 to 35 - a reflection of this card’s disappointing performance.

This concludes my journey into the early tournament impact of Dark Ascension. In all honesty, none of these results really surprised me. My initial reaction to this set’s spoiling was that it is relatively underpowered. The sacristy of cards from Dark Ascension in this Top 8 only solidifies my assessment. And while Havengul Lich may have earned itself the spotlight for the time being, I see very little opportunity to jump in on any particular card.

While this format sorts itself out, my primary focus will be on cards from Scars block and M12 which made a recent splash here. Dark Ascension cards, on the other hand, will have to simply wait.