I have a confession to make: I still own and avidly enjoy playing my Sega Saturn. The system flopped miserably in the United States. But before the system was pulled from the market, a few truly unique and exciting games slipped through the cracks and hit store shelves.

Unfortunately many of these sparsely known gems can also fetch a pretty penny! For example, consider what some claim to be the best Sega Saturn game (certainly the best RPG for the system):

Ok, I’ll admit this is an extreme scenario – the game is in mint condition and brand new. Still, opened versions of Panzer Dragoon Saga easily fetch in excess of $300 on popular auction sites. Who is paying this much for a relatively ancient video game?! There is someone out there who must be willing to pay this much or else these rare games would not be so expensive (in fact, there was one offer on this item that was declined).

What Does This Have To Do With Magic?

Like many hobbies, Magic has its fair share of the unique. These oddities often sell for phenomenal amounts of money. Some even exceed the costs of the game’s most valuable set-print card, Black Lotus.

But there is some risk to these obscurities. While they may have an attached retail value, an item’s true value can also be defined as the amount someone else is willing to pay for the item! The eBay listing I referenced above may truly “retail” for $1500. However since the game has no intrinsic value, the seller will eventually have to settle for the value as a second party perceives it. Otherwise the seller will be doomed to hold this game forever.

Thus, we have identified that there can be tremendous profit in the unique Magic Card market. Find the right buyer, who values your oddity at a high price, and you can make significant cash. But this endeavor can be a double-edged sword.

Because I collect Angels, this is my favorite obscure card example. What makes this card so rare? To answer, I defer to MagicLibrarities.net for the concise explanation:

The Chinese government has restrictions of what can and can not be depicted. Specifically, depictions of death, religion, or erotica are prohibited. Consequently, when Wizards of the Coast printed card sets for distribution in China, several artworks had to be changed. Over time, the artwork was no longer replaced, but modified. Furthermore, Wizards of the Coast has decided to meet Chinese standards when commissioning new artwork, hence alternate art has rarely become necessary anymore.

As luck would have it, there was one Angel that required special artwork for China – Portal’s Starlit Angel. Because there are many Angel collectors in the game, this card’s retail value has shot up. People who moved on this card early on have the potential to make significant profit!

As a savvy buyer, however, I refuse to pay such a high cost for this card. I am confident that should this card ever go to auction, the final sale price would be significantly lower – equal to the highest amount a buyer is willing to pay.

Being an avid Angel collector, I happen to know that there has not been such an auction for a very long time. I repeatedly see this card relisted every thirty days or so with no successful sale. This seller is a wise one because he knows that forcing bidding to end via a week-long auction will lead to a significantly less payout. Of course, eventually either some desperate buyer will pull the trigger or the seller will get sick of holding this piece of cardboard and he’ll reduce the price. It becomes a game of chicken at this point.

While not many players possess the Chinese Portal Starlit Angel, many players still own cards which are less available than the average Mythic Rare. Examples include Japanese foil playables, [card Snow Mercy]Holiday Promo Cards[/card], Summer Magic, Misprints, Altered cards, and the list goes on.

I’ve already demonstrated that there can be opportunity to profit from these Magic oddities. How can we maximize profit from these rarities when we come across them? I’ll divide this up into two sections: acquiring and unloading.

There is one fundamental rule that you should follow when acquiring these rarities: research! Knowing what these cards retail for, auction for, and buylist for is absolutely critical to ensuring you are acquiring these cards at a price point which enables profit.

An example I recently encountered involved the Holiday Promo Snow Mercy. I was interested in picking one of these up for my personal collection and so I did some research on their value. I saw that eBay auctions typically ended in the $60-70 price range. Meanwhile, Star City Games buys the rarity for $50 and sells it for…get this…$100!

Did you know that this large of a discrepancy existed? I was absolutely shocked. A few weeks ago I came across a vendor at a PTQ selling a copy of Snow Mercy for the bargain price of $45. I put that meme in the back of my mind and continued to battle through the tournament. 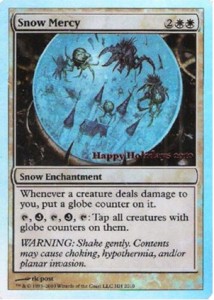 After 7 grueling rounds (and going 4-3 drop, unfortunately), I returned to the same dealer only to observe that the Snow Mercy was still for sale! I was baffled to see that no one saw that this card was priced below buylist price, especially with the ubiquity of Smart Phones. I assume the reason no one else jumped on this opportunity was either because they didn’t do their research or they didn’t want to bother with finding a buyer for this card. But with a guaranteed sale of $50, downside was altogether absent.

The moral of this anecdote is that the average Magic player is not familiar with values of the obscure. These are your opportunities to acquire. Before I get attacked for poor morals and taking advantage of ignorance, I am NOT advocating that you value your friend’s Snow Mercy at $20 in an attempt to profit. You still need to choose a viable basis for your valuations.

However, there should be no moral qualms with valuing your trade partner’s rarity at slightly below eBay price – after all, finding the perfect buyer willing to pay near retail price for the card takes a lot of work and you are entitled to a small premium for doing that work for your trade partner. A pseudo-finder’s fee of sorts, this practice enables the acquirer to make profit while providing the seller an asset which is in much higher demand (cash, format staples, etc.). Not to mention you are saving them the hassle sometimes associated with online sales: waiting for a buyer, fees, having to go to the post office, etc. It is instant gratification for them. And this should carry a price.

If no eBay auctions have ended recently for the given card (such as my Chinese Portal Starlit Angel example), then start with roughly half retail price as a negotiating point.

After you’ve acquired an oddity or two, it becomes time to begin the unloading process. I want to emphasize here that I would not recommend acquiring multiples of a single oddity nor would I myself go deep in picking up obscure cards. This will result in a lopsided portfolio, filled with cards the average FNM attendee couldn’t care less about.

Instead, focus on having a few of these oddities on hand at any given time. Make sure they are fully visible in your trade binder (I’d recommend the center of your front page) so that if you stumble upon the right buyer at a tournament you maximize the likelihood that buyer gets wind of the fact that you own this oddity.

This technique alone may not be enough. My Snow Mercy was in my trade binder for a couple weeks and multiple tournaments and not a single person even mentioned the card while turning the pages of my binder. Clearly, another outlet was needed.

Enter: the internet. Sites like MOTL are a great way to unload obscure Magic Cards because your post reaches a ton of prospective buyers instantaneously. The more people who know of your rare cards, the more likely the one person willing to pay close to retail will be discovered. A match made in heaven.

Finally, as a last resort, I can condone turning to eBay. But only under one condition. Do NOT set your item to sell via auction with a starting bid below a price you’re happy with. Obscure cards like the Chinese Portal Starlit Angel are attractive to very few people. And if not enough such people see your auction, your ending price will end up far below what you had hoped.

Instead, use either the buy it now option or set the starting bid of the auction to be around where you’re hoping to sell. This ensures the card will only sell if someone is willing to pay at least your bottom line. Your profit is protected – just remember that the card is only going to sell when it is cheap enough for the buyer to perceive it is a good price. Typical supply vs. demand economics hold true.

Trading in the obscure can be very exciting, but it is also feast or famine. Pay too high of a price and you will be destined to hold the card forever hoping to find the one desperate buyer.

Your goal should be simple: find the sellers looking to unload their obscure cards for quick cash or format staples and then unload these cards to the collectors who want to complete their sets of obscure cards. By taking on the task of mediating between the two, you can be rewarded with ample profits.

I ended up selling the Snow Mercy on MOTL for $65 shipped. I could have held out for more, potentially waiting until someone would give me close to the retail price of $100. But I recognized that holding this card in inventory was doing me no good, and I was willing to settle with a $15 dollar profit with a quick sale. Perhaps the buyer knows someone who will pay $100 – if so, the cycle will continue.

Eventually the collectors will find the cards they’re looking for and at an acceptable price. The key is to help move that process along while snagging profit along the way.

13 thoughts on “Insider: The Prizes and Pitfalls of the Obscure”