On December 1, we talked about picking some Uncommons to make some money on during this upcoming season. Well one of them has already seen the 500% growth I mentioned, so It’s time to move out, and re-adjust the group. Gut Shot is now selling anywhere from $6-8 a playset on EBay, so fire up your listings, or pick your favorite outlet, and cash those out. This should single handedly cover your costs (and then some) of the entire speculation group. The rest of this will be free-roll through PTQ season. This is the benefit of diversification. Once you hit one winner, you get a free gamble on the rest. 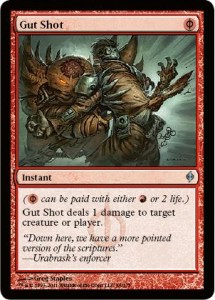 What about the rest of the list? Well I suggested cultivating your own particular pool based on the types of qualities these winners tend to have. One that I’m sure almost everyone is on board with is Dismember, is that still a Buy? Just a Hold? I’m moving in on more of these

This is a Buy for me right now. The meta has shifted to more bounce effects and focused on Tempo-based aggro. While I can’t argue that this wasn’t necessary, Dismember is not gone, and will guarantee to make a resurgence. I see this as an opportunity to buy more of what I like at a lower price.

The remaining cards are all about the same as they were in December, so are indefinite holds, as you’re not risking much by holding on to them. Entomber Exarch saw a slight increase, but probably not enough to cover transaction costs of shipping, while Beast Within dipped very slightly which means if you didn’t buy them before, there’s still time to do so.

Now that we’ve seen the new set, what uncommons do we want to add to the stockpile?

I like two uncommons so far, Lingering Souls and Strangleroot Geist. While these should seem somewhat obvious, picking them up at the right time is key. They both retail for $1.50 ea on Star City, but likely trade a bit lower, and will come down in the next few weeks as people get their hands on these. When Standard PTQ season rolls around, they’ll come back up again. Look for steals in trades, and stash the ones you grab in packs until you can get $2-3 for them.

I’m also interested in Oblivion Ring, but I'm hesitant to make a big move here, due to the massive number of printings available. I do expect Oblivion Ring to see a lot more play as Enchantments, Artifacts and Planeswalkers are all over Standard, and if any Undying creatures take the field, Oblivion Ring deals with them nicely too. This one is a pretty safe bet also, as it’s unlikely to completely disappear from the format. I’d also be careful that it may see yet another printing either in Avacyn Restored, or in Magic 2013.

Lastly, Lambholt Elder (AKA, Grandma Werewolf) is of interest to me. While a very expensive ½, a 4/5 ‘Ophidian’ type is no joke, and sits at a low enough price that I’d be interested to see where it goes. It’s pretty tough to block a 4/5, but it’s also pretty tough to let your opponent draw a card while you take 4. While I’ll admit it’s a longer shot, I’m going to stash a few of these and see where it goes. A friend and I were discussing it, and when he said, “As a 1/3, Scroll Thief would have never connected in Standard which is why he was never good, as a 1/2 you'll prob never hit your opponent anyway. Now, imagine your scroll thief as a 4/5. It’s like that GGG 4/5 beast [Leatherback Baloth] that basically draws a card, just have to wait until Vapor Snag is no longer the flavor of the month.” I liked his thinking on this. It’s a cheap target, without much risk, so I’m going to jump on his bandwagon on this one. It’s just tough to say if/when the format will want a card like this.

Lastly, there’s been endless chatter about Dungeon Geist. This is pretty cheap right now, and I’m at least grabbing a set at release weekend, but I’m not so sure about it really being the next Sower. None the less, it’s additional Frost Titan type effect, for less mana, on an aggressively costed flier. At the least, after Titans leave the format, he should be a player. Keep your eyes on him.

What uncommons did you speculate on? Did you pick any winners that weren’t in my Dec 1 list? Is there any you want to add now, that we’re not discussing?

Enjoy release weekend, and keep your eyes on the Pro Tour chatter next week to see what archetypes pop up.

2 thoughts on “Insider: Pick Some Winners – Updating Your Picks”